A dutch Nobel laureate and his colleagues have built a motor with synchronous rotor motion – using two molecules. The breakthrough allows us to build more complex nanoscale devices to mimic biological systems. 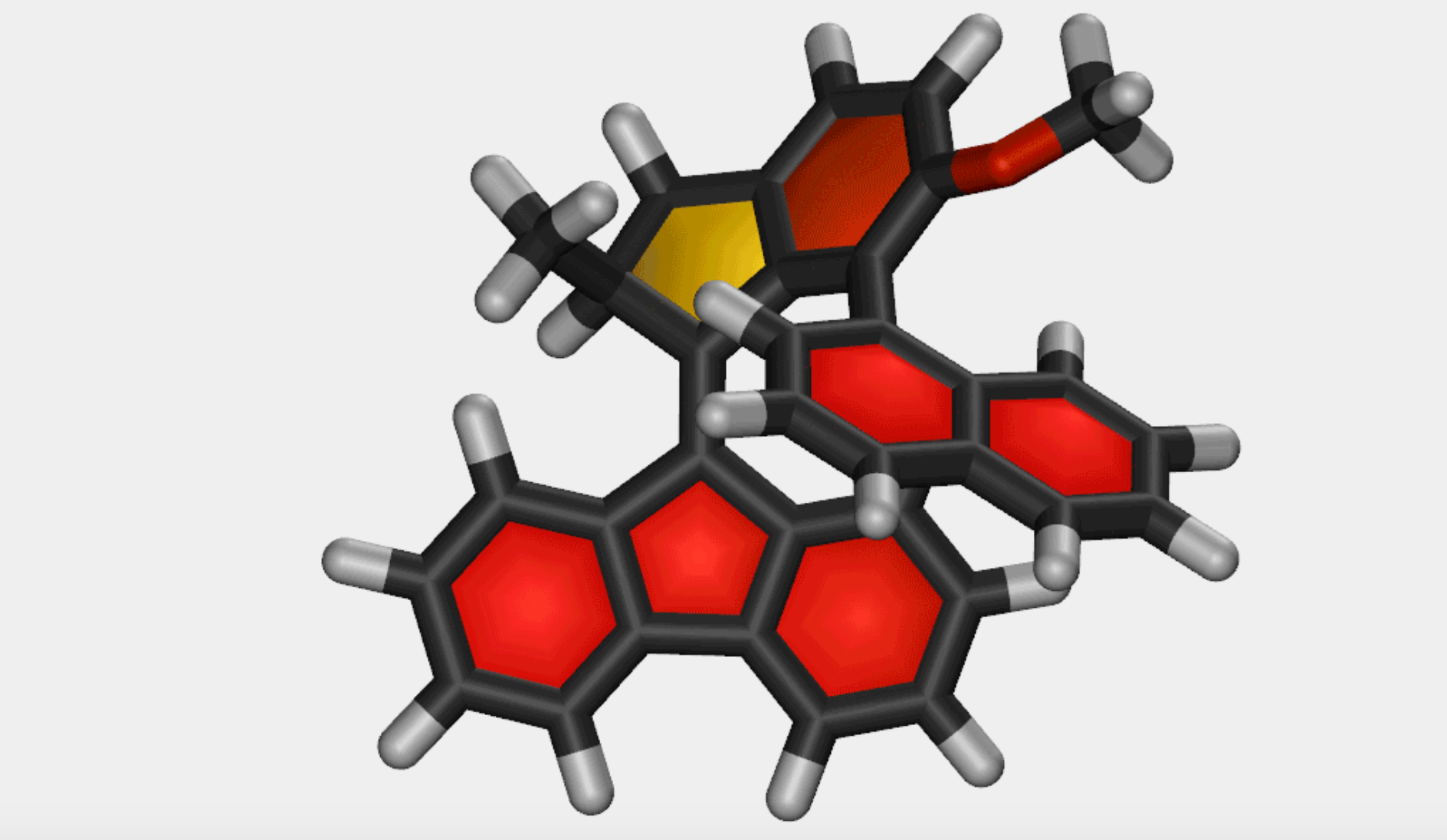 Bernard Feringa dreams of one day building a full-fledged nanocar made of a few molecules mimicking their macroscopic counterparts, moving along a tiny road, at room temperature. En route to this deceptively ingenuous goal, he shared the Nobel Prize for chemistry last year (with two others). It was for having built the world’s first molecular motor – a machine composed of a few molecules that together behaved just like the one we use to, say, pump water, even if it couldn’t yet pump anything. Many scientists before him had tried to achieve what he had and failed. Feringa’s principal contribution was to build a motor that spun only in one direction. If it had spun both ways, it would have just been a whirligig.

On June 1, Feringa and the members of his research group at the University of Groningen in the Netherlands reported that they had one-upped their previous achievement. They had managed to build a geared rotary motor that used energy directed at one part of the machine to cause other parts to move in a predictable manner. This has not been done before. A review in the journal Science stated that this was “an important step forward toward more complex mechanical functions with artificial nanoscale devices.” The paper was published in the same journal on June 1.

The new motor is made of two molecules: an alkene and a naphthalene. The alkene consists of two ‘halves’ of indanyl and fluorenyl. They are joined by a carbon-carbon double bond. Together, they serve as the motor, the part that receives the energy input, with the double bond functioning as the motor axis. The indanyl half is then joined by a single bond to a naphthalene molecule that functions as the rotor (rotating component). When energy is supplied to the motor, it transmits it via the motor axis, on to the rotor axis and finally to the rotor, which moves around.

“If it is too tight, the gear is choked; if it is too loose, the mechanical transmission does not occur,” Alberto Credi, a nanoscientist specialising in building nanoscale devices at the University of Bologna, Italy, told The Wire. So “a perfect joint has been realised by a clever molecular design.”

A feature of this design is that the same side of the paddle always faces the motor. This is akin to the Moon’s journey around Earth, where the satellite’s ‘dark side’ always faces away. In the motor invented by Feringa & co., the paddle takes the place of the Moon and the alkene, of Earth. According to Feringa, achieving such synchronisation was one reason it took him and his colleagues over four years to build this motor. 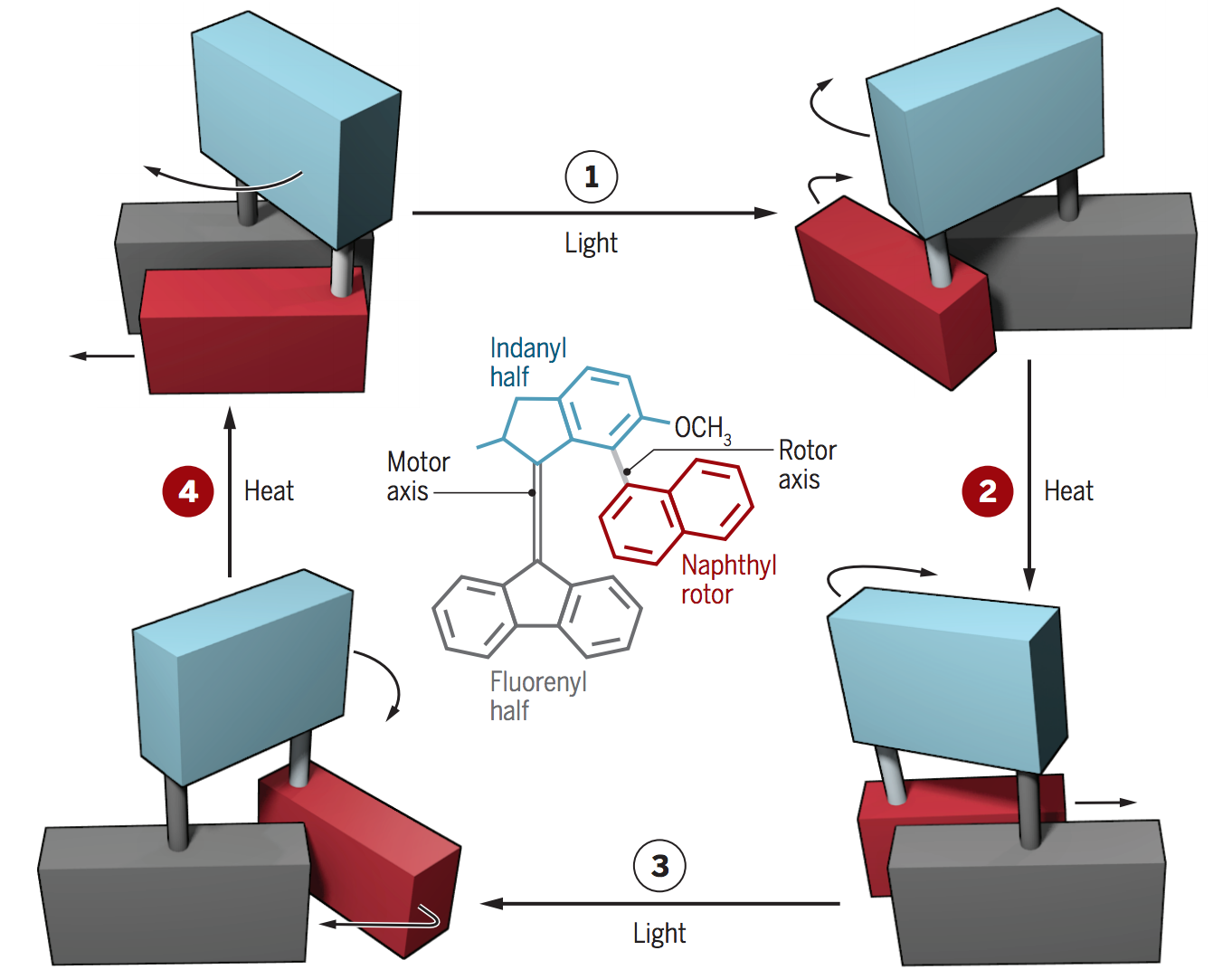 Feringa had also stated in a press release that the design was a “fundamental step in the development of molecular machines”: the ability to transmit kinetic energy and achieve synchronised movement. “In biology, you see many of these systems where molecules are connected in a cog-like manner, which can synchronise or amplify movement. As far as I’m aware, this has never been done in artificial systems like our own.”

According to the review, coauthored by Credi, “The rotation generated by the motor is unidirectional, continuous, and … takes place under steady experimental conditions as long as light energy is available.” When ultraviolet light of a fixed frequency is shined on the molecules (while they are held in a solution at around -60º to -80º C), the indanyl half of the motor begins to rotate repetitively around the fluorenyl half. Meanwhile, the single bond joining the indanyl half and the naphthalene rotates randomly thanks to changes in temperature.

To overcome the randomness, and force the naphthalene into position while it rotates, Feringa’s group invoked another bit of innovation. According to Credi, they attempted to ensure that the rate at which the random rotary motion happened was affected by the state of the motor. In other words, they used the nearness of the molecules to affect each other’s motion. “Imagine two paddle wheels that are touching each other but not perfectly coupled: if one of the two is pushed to rotate, its motion could be slowed down or even stopped by moving the other one, as in a sort of brake,” he said.

The molecular assemblage consists of 34 carbon atoms and has been dubbed (S*, M*, Ra*)-1. The transformations it underwent as it moved from step to step were inferred using nuclear magnetic resonance and circular dichroism spectroscopy. The latter involves the use of a dichroic material, which records how light has been polarised, to elicit the structure and spatial arrangement of molecules. 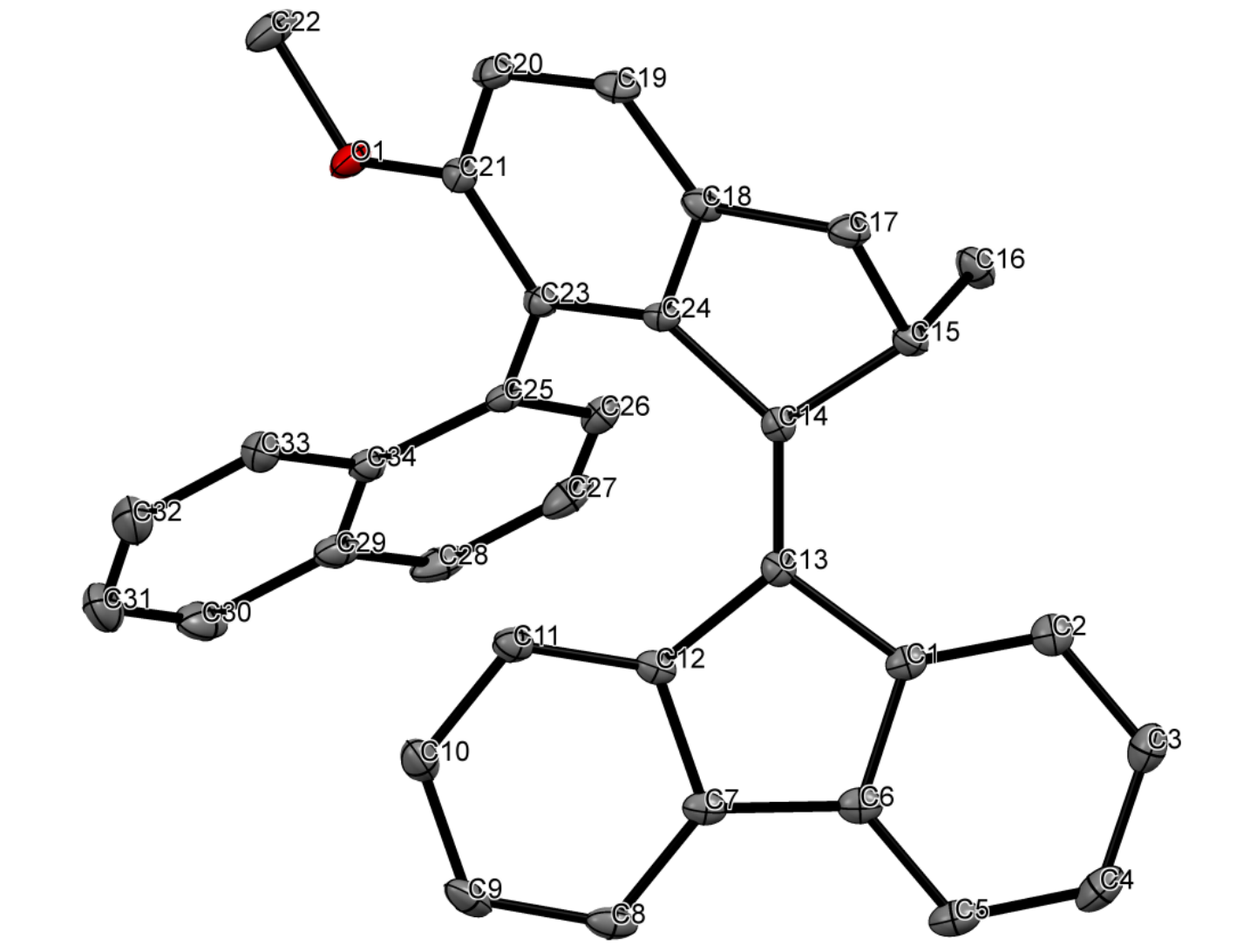 The sequence of electrochemical and thermodynamic reactions followed is similar to those employed by Feringa when his team built the first unidirectional molecular motor in 1999.

The materials also have heritage. “The choice of [fluorenyl and indanyl] is dictated essentially by their shape and rigidity,” Credi explained. “The fluorenyl and indanyl moieties are part of a well known motor, whereas an advantage of the naphthalene paddle, besides its flat rigid shape, is the lack of symmetry with respect to the rotor axis, which makes it possible to distinguish its relative orientation with respect to the motor.”

The relay of energy through mechanical connections among molecules is less efficient than when it happens through electric or chemical reactions, but it does happen, especially in signal transduction. Being able to replicate their physical behaviour takes us a step further towards building complex ‘artificial systems’. Thanks to Feringa’s group, we know have one more mechanical gearing mechanism in our repertoire of components (think of it as unlocking an achievement in a game).

At the same time, it is fruitless to carry on speculating about what these achievements could be good for. J. Fraser Stoddart, who shared the Nobel Prize last year with Feringa for having assembled curious molecular arrangements like Borromean rings, wrote in an essay in 2005, “It is amazing how something that was difficult to do in the beginning will surely become easy to do in the event of its having been done. The Borromean rings have captured our imagination simply because of their sheer beauty. What will they be good for? Something for sure, and we still have the excitement of finding out what that something might be.” Feringa said in a 2014 interview that he likes to build his “own world of molecules”.

In fact, Stoddart, Feringa and Jean-Pierre Sauvage shared the chemistry prize for having developed new techniques to synthesise and assemble organic molecules in their pursuits.