A Surprise Journey, an Unexpected New Year's Gift From Across the Arabian Sea

Of the 14 humpback whales to sport transmitters, she is the sole female, and she alone has made the more-than 1,500-kilometre journey across the bay.

A humpback whale in the Arabian Sea. Credit: Darryl MacDonald A humpback whale in the Arabian Sea. Credit: Darryl MacDonald

Four days before Christmas, India’s west coast had a surprise visitor. Her name is Luban (Arabic for ‘frankincense’), and she is a humpback whale (Megaptera novaeangliae). Researchers had tagged her with a satellite transmitter in the Gulf of Masirah, Oman, on November 17. A month after that event, she took off across the Arabian Sea, arriving well in time for Christmas off Goa.

Scientists recognise individual whales from their tail flukes since each is as unique as a fingerprint. The pattern on the base of Luban’s tail resembles a tree and so her name. Researchers have seen her distinct tail break the sea surface since 2002, but they tagged her only in 2017.

“The whales are not caught,” Suaad Al Haarthi, program director of the Environment Society of Oman, told The Wire. “The tag is placed on the whale from a boat while the whale is at the surface and freely swimming.”

Of the 14 humpbacks to sport transmitters, she is the sole female, and she alone has made the more-than 1,500-kilometre journey across the bay.

“My heart is beating faster than when it was last in love,” said Indian marine biologist Dipani Sutaria in an email a day after Luban surfaced off Goa.

Sutaria alerted a network of ocean watchers – fishermen, naturalists, scientists, Coast Guard, Forest Department, NGOs, customs and port authorities – spread from Gujarat south along the coasts of Maharashtra, Goa, Karnataka, Kerala and Lakshadweep to keep an eye out for the whale. Then, unable to contain her excitement, Sutaria set off to spot this Yuletide visitor from the Middle East.

Whales circumnavigate the world, and none more so than humpback whales. In 2010, one extraordinary female swam 9,800 kilometres from Brazil to Madagascar, setting the record for the longest migration by any mammal. The following year, a Western North Pacific grey whale upset that record by 1,000 kilometres. Humpback whales travel 5,000 kilometres annually from the cold polar waters, where they feed on crustaceans called krill in summer, to breed in the tropics during winter. Luban’s journey pales in comparison.

So why are researchers in Oman and India excited by her coast-to-coast trip? Because the humpback whales of the Arabian Sea don’t behave like other whales, even of their species. 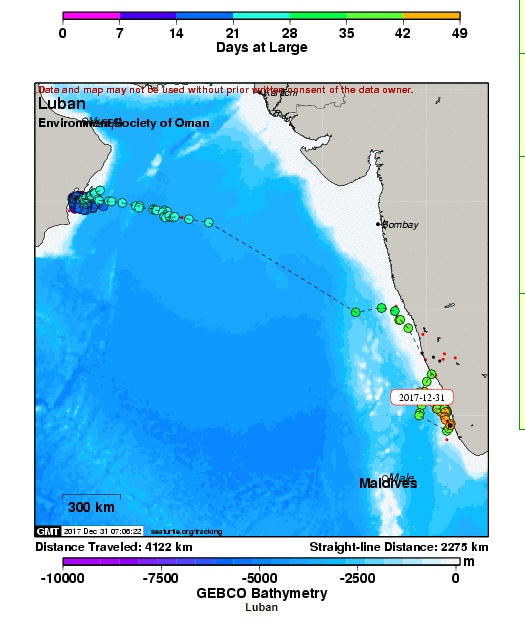 In 1997, Yuri Mikhalev, of South Ukranian Pedagogical University, published a report that shocked researchers. He dug through recently declassified whaling records maintained by the Soviet Union. In 1963, Slava, a 508-foot factory ship, had spotted 20 to 30 humpbacks in the Gulf of Aden, on its way to Antarctica where it hunted whales in their feeding grounds.

Whalers figured humpbacks from the southern hemisphere travelled north into the bay. But the timing of these marine creatures seemed to be off. It was the season to feed near Antarctica. Why were these whales hanging about in tropical waters, presumably starving?

By this time, intensive operations had cleaned up the southern ocean of whales. In 1965, the crew of Slava and another factory ship, the 33,000-ton Sovetskaya Ukraina, one of the two largest whaling ships in the world, took four whales en route to the southern ocean.

In early November 1966, Sovetskaya Ukraina chugged up the continental shelf off Oman, harpooning 62 humpback whales. It steamed across to the Gulf of Kutch, off Pakistan, where it killed 164. On one day, November 15, 1966, the whalers killed 12 off the coast of Bombay. They slaughtered 60% of the whales they spotted, taking 238 humpbacks in all that year. These cetaceans were naïve, never having encountered whalers before or since. The Soviet Union reported these figures neither to the Bureau of International Whaling Statistics, Norway, nor to the International Whaling Commission.

But scientists aboard the whaling ships kept clandestine notes on the butchered whales. Examining these and other records, two researchers – Yulia Ivashchenko and Phillip Clapham – think “the Soviet whalers killed at least 180,000 more whales than they reported between 1948 and 1973” globally. Charles Homans, a journalist, calls the scale and wastefulness of the massacre ‘The Most Senseless Environmental Crime Of The 20th Century’.

Using whaling records, Mikhalev reports about 50% of the 238 whales taken from the Arabian Sea had been feeding. This was unusual since they weren’t known to feed in tropical waters. If they managed to find schools of krill and fish in the same area where they breed, could these marine mammals reside permanently in these waters?

Since the year 2000, the Environment Society of Oman and its partners have studied marine life, including humpback whales, off their coast. They couldn’t find any matches in the fluke patterns between the marine mammals in Omani waters and members of the southern hemisphere population near Madagascar.

Even though the IUCN Red List categorises the species as of ‘least concern’, it recognised the distinct Arabian Sea population as ‘endangered’ in 2008. From scrutinising more than 10,000 photos, researchers estimated that less than 100 Arabian Sea humpback whales were alive. What impact that catastrophic November of 1966 had on this population is unknown.

A 2014 genetics study put the debate to rest. It showed these whales had been isolated from the southern Indian Ocean humpbacks for 70,000 years, dubbing it “the world’s most isolated humpback whale population”. Their nearest relatives, the southern hemisphere humpback whales, breed on a different schedule, reinforcing their isolation. Their slick bodies bear neither the scars of shark bites nor barnacles.

The Arabian Sea humpback whales are the only sedentary whales in the world, feeding and breeding in the same area. And for a good reason.

The network of marine researchers around the Arabian Sea had come to accept the whales’ short journeys up and down the coast of Oman – until Luban’s foray into Indian waters took them by surprise and made Sutaria’s heart beat faster.

Male humpback whales sing haunting songs and have signature flourishes. The song features of the Arabia Sea whales are different from other humpbacks. Credit: Environment Society of Oman

Blue and Bryde’s whales are relatively more common along the Indian coastline. Humpbacks, however, seem to be found only on the west coast and so rarely that Sutaria keeps count.

In a report to the International Whaling Commission, she wrote, approximately 70 to 75 baleen whale carcasses washed up on the west coast between 1980 to 2014. Only seven were humpbacks. In 2006, the Indian Coast Guard took photographs of one, and in 2008, fishers freed another tangled in a fishing net. In March 2016, a male sang his haunting song off Goa.

“No one has carried out long-term surveys in the region, and our current work in India is to monitor the species, either via fishermen who might sight them or via individuals that get washed ashore,” Sutaria told The Wire.

When fishermen see the whales, which they call Maccha Mata, Maccha Raja or Maccha Babu, they don’t approach them out of fear. They break a coconut as an offering and report a description of the fluke to researchers.

Despite the many pairs of eyes scanning the horizon for a spout of water jetting into the air from her blowhole or a fluke breaking the surface, Luban didn’t show herself to anyone. “Madam Luban is on the move, and the satellites are not doing a good job,” Sutaria wrote. “So we are in limbo in Goa on Christmas in field clothes. Such is life!”

By 8 pm on Christmas, Luban surfaced, and her tag marked her position about 50 kilometres off Kannur, Kerala.

Why would Luban make what seems like a long trip for her population? Could something be wrong with her – illness, loss of territory to another? Or could she have followed an oceanic disturbance after Cyclone Ockhi?

“Humpback whales feed on krill and areas of high productivity are of course a reason for them to party,” said Sutaria. “According to Mahi Mankeshwar, who checked the satellite imagery data between December 13 and 18, chlorophyll concentration patches in the central Arabian sea and from Goa to Kerala, India, were dense and rich. We cannot link the two for sure unless we actually re-sight Luban and observe her behaviour.”

Perhaps the whales were travelling locally within the bay. “We had previously suspected that this was a shared population between Oman and other states such as India, Sri Lanka and Pakistan,” says Al Harthi. “However, over the years, we had not had any photo-id matches and no evidence to support this theory. Now that Luban has provided the evidence that there is a more likely connection, this will require further genetic investigation. It could potentially mean that there are more whales out there than had been observed in Omani waters. It also tells us a regional approach is required for appropriate conservation management of this population.” 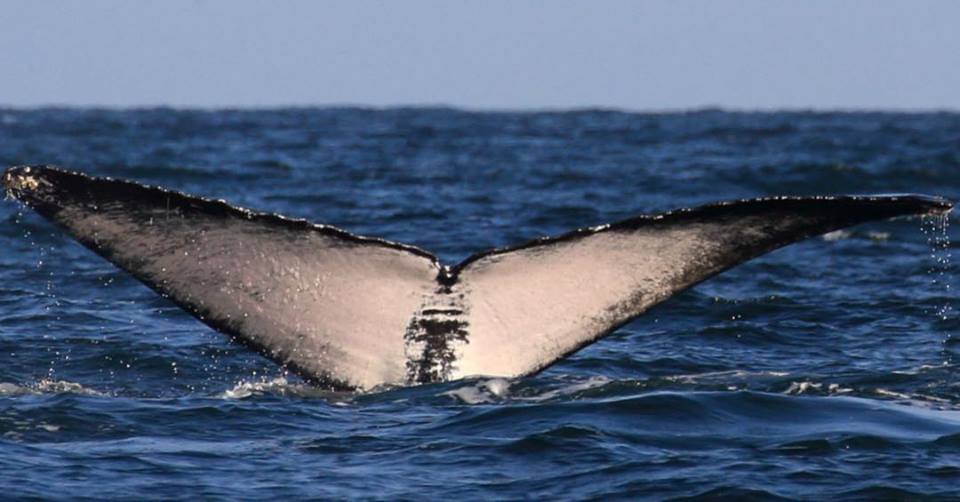 Humpback whales usually travel with young or with others in a pod. So it’s also possible Luban could have been travelling with companions. “When Luban was tagged, there was another sub-adult whale with her,” says Al Harthi. “We would be curious to find out if they made the journey across the Indian Ocean together, and hope that the team of scientists in India will be able to re-sight them.”

On New Year’s Day, Luban is still off the coast of Alappuzha, out of sight of any humans. “For me, this is sacred, an epiphany for a good start to 2018!” said Sutaria.