They also found the dying star had begun to spew large amounts of material in the year or so before it blew up – something astronomers didn't think would have happened. 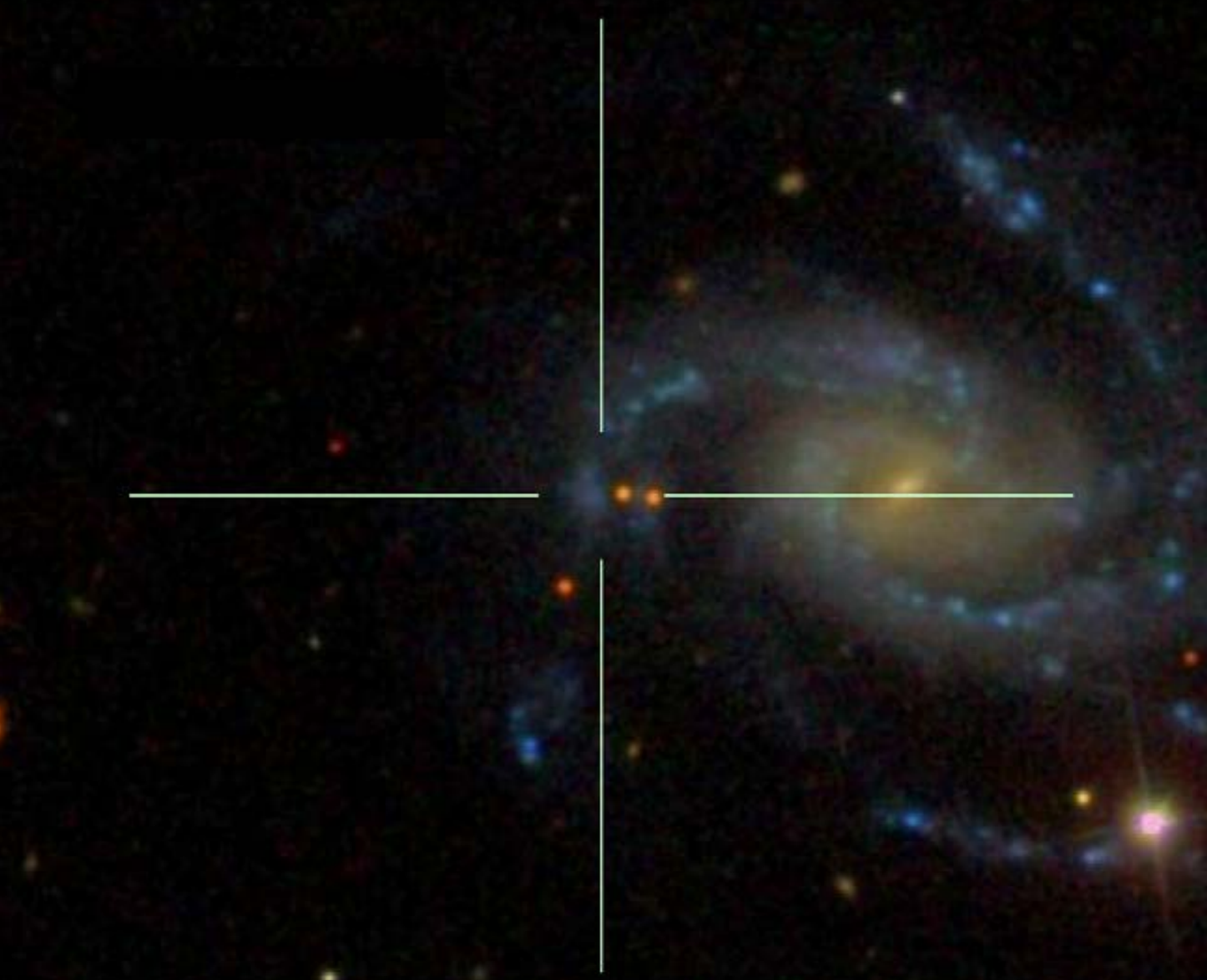 The supernova 2013fs located in a blue, star-forming area (the red point sources in the vicinity are foreground stars), which is apparently a part of one of the major arms of the spiral host NGC 7610. Caption and credit: doi:10.1038/nphys4025

On the night of October 6, 2013, Dan Perley, then from the University of Copenhagen, was using one of the twin Keck Telescopes in Hawaii when he received a message. It was to follow up after a bright fleck in the sky that hadn’t been visible in images of the same patch taken only the night before, in the galaxy NGC 7610 166 million lightyears away. Perley had been informed by his colleagues, who in turn had been tipped off about the fleck by the intermediate Palomar Transient Factory (iPTF) survey, a fully automated survey of the night sky underway at the Palomar Observatory, California.

To be sure, Perley made four spectroscopic observations of the fleck instead of just the one. He was using the Keck-I telescope, the largest of its kind in the world. After further analysis, he and his colleagues would realise that they had been looking at a really young supernova – a star that had begun to die barely six hours earlier. No one has yet caught a supernova this quickly into its act; previous records were in the order of a week. Astronomers believe the new data could hold clues about what exactly happens to a star in its death throes.

“Such observations provide theorists and modellers of stellar evolution with crucial inputs and constraints to ultimately understand the exact mechanisms that effect the latest stages in the evolution of a star and also to understand the supernova explosion itself,” Ofer Yaron, an astrophysicist at the Weizmann Institute, Israel, told The Wire in an email. “Both of them are still not understood and are the topics of major ongoing research.” The Weizmann Institute is part of the international iPTF collaboration and Yaron was one of the scientists involved in analysing the data obtained of the young supernova.

For example, in supernova explosions that happen as a result of a star’s core having collapsed due its own mass, scientists don’t know how big the star is or what its innards look like at the moment of the explosion itself. “We actually don’t even know the exact mechanism” behind it, Yaron said. Is it driven by neutrinos speeding out of the core? Are nuclear fusion reactions kicked off in the intermediate layers of the star?

The red supergiant and its shell

The collaboration was able to study the star, designated SN 2013fs, in visible, radio and ultraviolet frequencies as well as collect X-ray data using the NASA Swift satellite. The cloud of ionised gas surrounding the star had been imaged by Perley using the Low Resolution Imaging Spectrometer on Keck-I. All together, they helped uncover an interesting medley of events signalling the beginning of the end.

Before the supernova explosion, SN 2013fs had been a red supergiant, a very voluminous star that had run out of hydrogen to fuse in its core. In such stars, helium accumulates in the core even as hydrogen fusion begins to occur in the outer layers. SN 2013fs began to expand to cool itself down, ballooning to 50-175-times as wide as our Sun and turning an orangish red (cooler than the usual white-hot). If our Sun itself became that big, it would swallow the orbits of Mercury or Mars depending on the range. Astronomers, however, note that SN 2013fs could have become even bigger. And now that they know it did not, they will have to think about why not.

Moreover, “the emission lines observed in the early spectra point to the fact that there was this nearby dense shell of circumstellar material” (CSM), Yaron said. It was a cloud of highly ionised gas surrounding the dying star at a distance of around 10 billion km and weighing about as much as Jupiter. The iPTF collaboration found that the CSM had also completely disappeared two or three months after the explosion because it stopped showing up in radio-frequency data. High-energy radiation from the star had excited the material, which then lost the extra energy in certain ways that gave away its identity: helium, oxygen, nitrogen, all starstuff. But exactly how was it lost?

The data favours multiple explanations; the iPTF collaboration prefers one in particular, and it is surprising. Their paper suggests “that this material was ejected by the star during the few hundred days prior to its explosion”. According to Yaron, “In recent years, we began accumulating observational evidence that massive stars experienced elevated mass-loss before the supernova explosion.” With the new study, “we have proved that normal red supergiants also experience this, so [it appears to be] a common phenomenon among massive stars in general.”

Their paper was published in the journal Nature Physics on February 14, 2017.

The data also makes room – but less so – for the possibility that, instead of a sustained ‘blowout’ over late-2012 and early-2013, SN 2013fs could have lost the material by sighing out a weaker wind over a longer span of time. Unfortunately, the iPTF group could not measure the velocity of the gas within the CMS: the slower the gas is moving away, slower the rate at which it would have been lost by the star.

Then again, similar uncertainty over the various properties of a star at the precise moment of its demise makes these observations all the more important. For example, once the red supergiant runs out of helium to fuse in its core and moves on to carbon, oxygen, neon and finally silicon, the core’s composition changes dramatically. Previous explorations of this process propose it would send shockwaves reverberating through the star all the way to its surface, where it would displace and throw off material.

Norbert Langer, a theoretical astrophysicist at the University of Bonn, explained in an accompanying article for Nature: “For example, for red supergiant wind velocities of only 5 [km/s], the high mass loss period could also have lasted hundreds of years, perhaps induced by violent pulsations. The gas shell could even be static, like the one recently discovered in Betelgeuse, our closest red supergiant, which is thought to be the result of the confinement of Betelgeuse’s wind due to external ionising photons.”

The radiation emitted by the star’s core during fusion creates an outward pressure that pushes against the weight of the star’s outer layers. Because the core is also successively attempting to fuse heavier elements, it has to become hotter to kickstart the necessary reactions, so it contracts. But at some point, nuclear fusion as well as radioactive decay of other isotopes begin to produce iron-56, the heaviest element the fusion of which produces more energy than it consumes. And once it is exhausted and the core no longer supports the necessary radiation pressure, the outer layers of the core collapse inwards, bounce violently off the inner core, shoot off into the star’s outer layers and send them reeling into space.

Thus, the star itself blows up. When this happened to SN 2013fs, the CSM became heated to over 60,000º C and was possibly dematerialised within a week.

If the progenitor star was once 8-40-times as heavy as our Sun, like SN 2013fs was, the ensuing explosion is called a type II supernova, the more common end for a star in the cosmos than a type I. There are many kinds of type II supernovae depending on how their brightness declines over time – gradually, rapidly, steadily, etc. SN 2013fs was thought to be a IIn but later turned out to be a IIP, which means its brightness falls slowly over time before normalising.

The star’s eventual disintegration releases the elements it produced into the interstellar medium (the space between stars) – this is how the universe’s heavier elements are created. The pieces of metal embedded in the device on which you are reading this? They were once inside a star. Star-born hardware is why humankind even has a digital age.

The work of the iPTF collaboration and others like it is key to understanding when, where and how supernovae occur and to validate what is still a mostly theoretical body of knowledge of how stars die. Catching it early in the act can be very useful because the violence of a supernova, after it occurs, usually destroys any evidence of what might have come before.

Later in 2017, iPTF will be replaced by the Zwicky Transient Factory, an upgraded version of the 48-inch telescope at Palomar Observatory plus a better camera that will enable a “full scan of the visible sky every night”, according to Yaron. “The meaning of this is that the number of transients in general, and supernovae in particular, discovered each night will grow tremendously, with many more events that will be detected young, not only within one day from explosion but even within very few hours or around one hour.”

There are also plans for a space-borne instrument called ULTRASAT to be launched before 2021. The Israeli Space Agency and NASA have announced that they will collaborate on it. ULTRASAT is set to have a camera that can scan a 30-times larger patch of the sky at once than the one in iPTF can, and will be able to pick up on early ultraviolet emissions from pre-supernova stars and alert astronomers within one minute.