A Story of Monsoons and the Indus Civilisation, Teased out of Ancient Rock

Our understanding of what could have motivated the ancient settlement to evolve as it did adds some depth to the story of our forebears.

The spatial extent of the Indus valley civilisation (~5,300 to 3,300 years before present) is marked by dotted green lines along with the Indus river (brown line). Shading indicates the spatial pattern of June-to-September rainfall rate (mm/day). The Sahiya cave is shown by a black star. Credit: DOI: 10.1126/sciadv.1701296 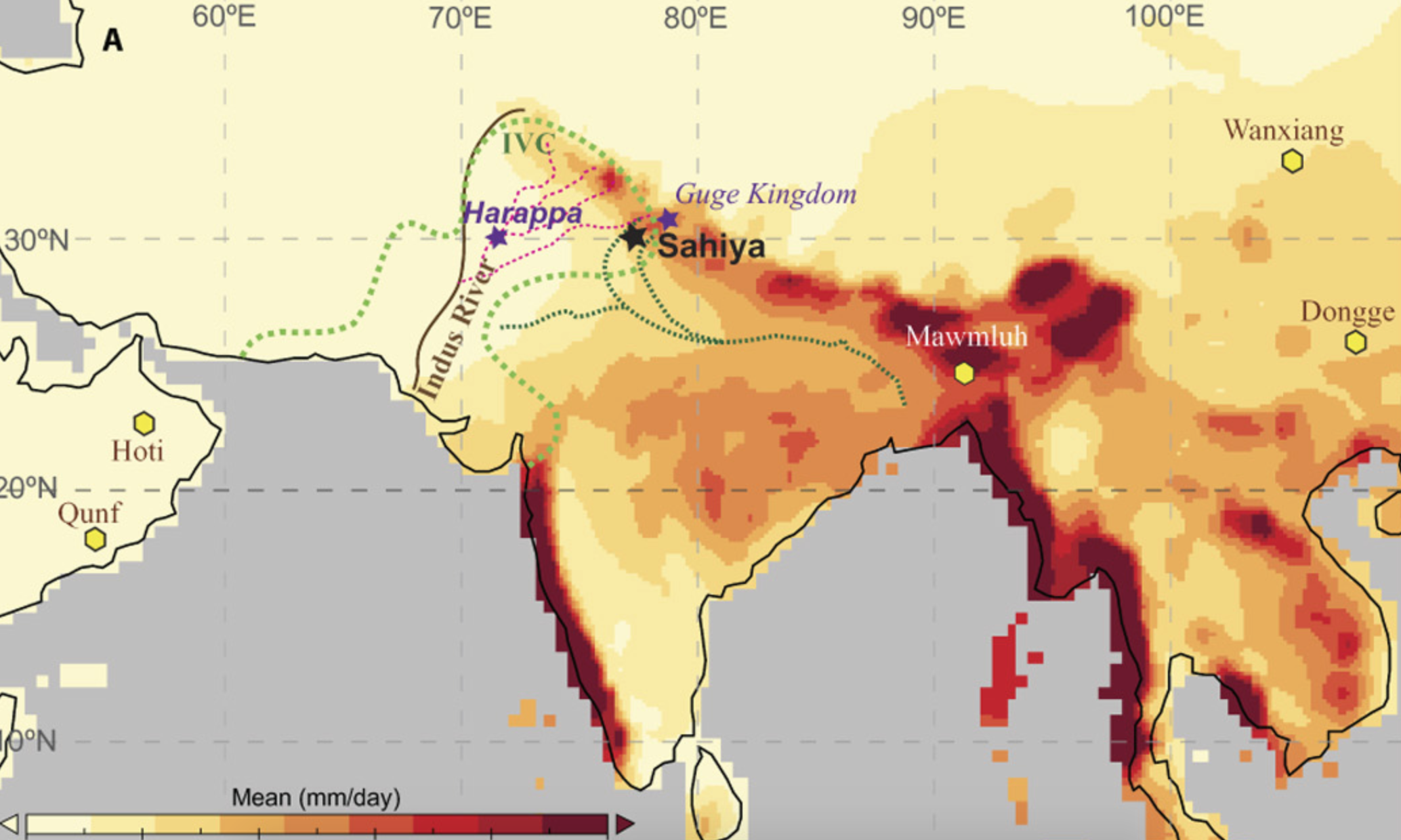 The spatial extent of the Indus valley civilisation (~5,300 to 3,300 years before present) is marked by dotted green lines along with the Indus river (brown line). Shading indicates the spatial pattern of June-to-September rainfall rate (mm/day). The Sahiya cave is shown by a black star. Credit: DOI: 10.1126/sciadv.1701296

A new study highlights the impact changing rainfall patterns could have had on the collapse of the Indus valley civilisation. Scientists were able to reconstruct the Indian summer monsoon’s (ISM’s) data from the time. Together with how we know temperature has varied in the northern hemisphere and Himalayan river discharge over the last 5,700 years, they were able to examine how the climate could’ve influenced socio-political happenings many millennia years ago.

“There appears to be a rhythmic change in monsoon rainfall that appears to correlate with societal changes,” Ashish Sinha, a professor at California State University, Dominguez Hills, and one of the authors, told The Wire.

The ISM hits the Indian subcontinent from June to September. To understand how much it rained in this period over many years, the researchers explored a cave in Uttarakhand named Sahiya.

According to Gayatri Kathayat, a post-doctoral researcher at Xi’an Jiaotong University, China, and another member of the study, the Sahiya cave was chosen for multiple reasons. It’s located at the edge of the region affected by the ISM, so it is sensitive to any shifts in the strength and direction of the rainfall. “This cave is in the path of the way the Indian monsoon progresses even today, so actually, it’s very well located,” Rajiv Sinha, a professor at IIT Kanpur, told The Wire. He was not involved in the study.

However, Anindya Sarkar, a professor at IIT Kharagpur, had reservations about the cave. The Sahiya is well removed from where the Indus valley civilisation once flourished, so Sarkar cautioned that the study’s data could be susceptible to being misread as a result, especially when extrapolating its conclusions towards how the civilisation could have evolved.

Of course, finding a speleothem in semiarid or arid regions, where the ancient civilisation once thrived, would be impossible.

As it happens, where the civilisation once thrived is today a large arid/semi-arid region, and finding a cave here to collect water samples from would be very difficult. Moreover, while Ashish agrees that the Sahiya cave is a single record, he also defends it as a “strategic” one. In the future, “more local, regional datasets” – particularly when seen together with archaeological records – would help paint a fuller picture, he says.

Kathayat made several trips to the Sahiya cave in 2010 to collect speleothem samples. When rainwater trickles through pores in a cave, pieces of minerals get caught up in its flow and are deposited wherever the water stops flowing. Stalagmites are a type of speleothem that form on cave floors, forming a conical tower of rock up towards the roof.

She and her colleagues sampled multiple stalagmites from Sahiya to understand how precipitation in the area could have varied over the last 5,700 years. The best speleothem samples form in quiet caves with consistent temperatures, relatively high humidity and with little erosion. Cutting one open reveals a time signature of sorts, one that Ashish compares to growth rings on tree trunks. The older part of the speleothem lies towards the bottom, the younger deposits are closer to the top.

From this simple configuration of materials and information, scientists can extract a lot of useful data. When it comes to rainfall specifically, the clues are contained in two kinds of oxygen atoms, or isotopes: O18 and O16. If a sample has more of one isotope than the other, then it gives away what kind of rainwater it formed out of and when because the abundance of these isotopes also changed in time in a specific way. As Ashish put it, “The isotopic composition of rain becomes fossilised in the speleothems.”

Kathayat said they measured the ratio of the two isotopes captured in stalagmites. The ratio changes with air temperature and amount of rainfall. The added presence of uranium, which decays in a predictable amount of time, means the data out of each stalagmite comes with a timestamp. So the layers of a speleothem together make up a window into the life and times of ancient summer monsoons.

“When we started to compare this record with archaeological and historical accounts, we found a very strong [timewise] relation,” Ashish explained. “The period when the monsoon was weak, the northern hemisphere was cold and the river discharge was low – those were also the times when ancient civilisations collapsed.” For example, the Mauryan empire and Tibet’s Guge kingdom both declined in (around) 180 BCE and 1623 AD while their territories became colder and received less rainfall than usual.

These were also the circumstances when the Indus valley civilization started on its de-urbanisation period. The reconstructed data suggests that colder temperatures, reduced discharge of Himalayan rivers and poor rainfall might have led to drier conditions in the civilisation’s western territory. This is when the people could have started opting for greener pastures. The civilisation’s eastern territories were still experiencing warmer temperatures and the monsoon was in full swing.

More than just a gradually changing hydroclimate could have altered the spread of an old civilisation at a local level. However, our understanding of what could have motivated its people adds some depth to the story of our forebears, a story of how they learned to cultivate our lands and sustain themselves in the face of new challenges.

The study was published in the journal Science Advances on December 13, 2017.