Searching for the Abominable: Is It a Man? Is It an Ape? It's a… Bear?

According to a new study, the 'Abominable Snowman' is a brown bear. According to an older hypothesis, the creature is a polar bear. Yet another says it could be a human species thought extinct. Which one is it? 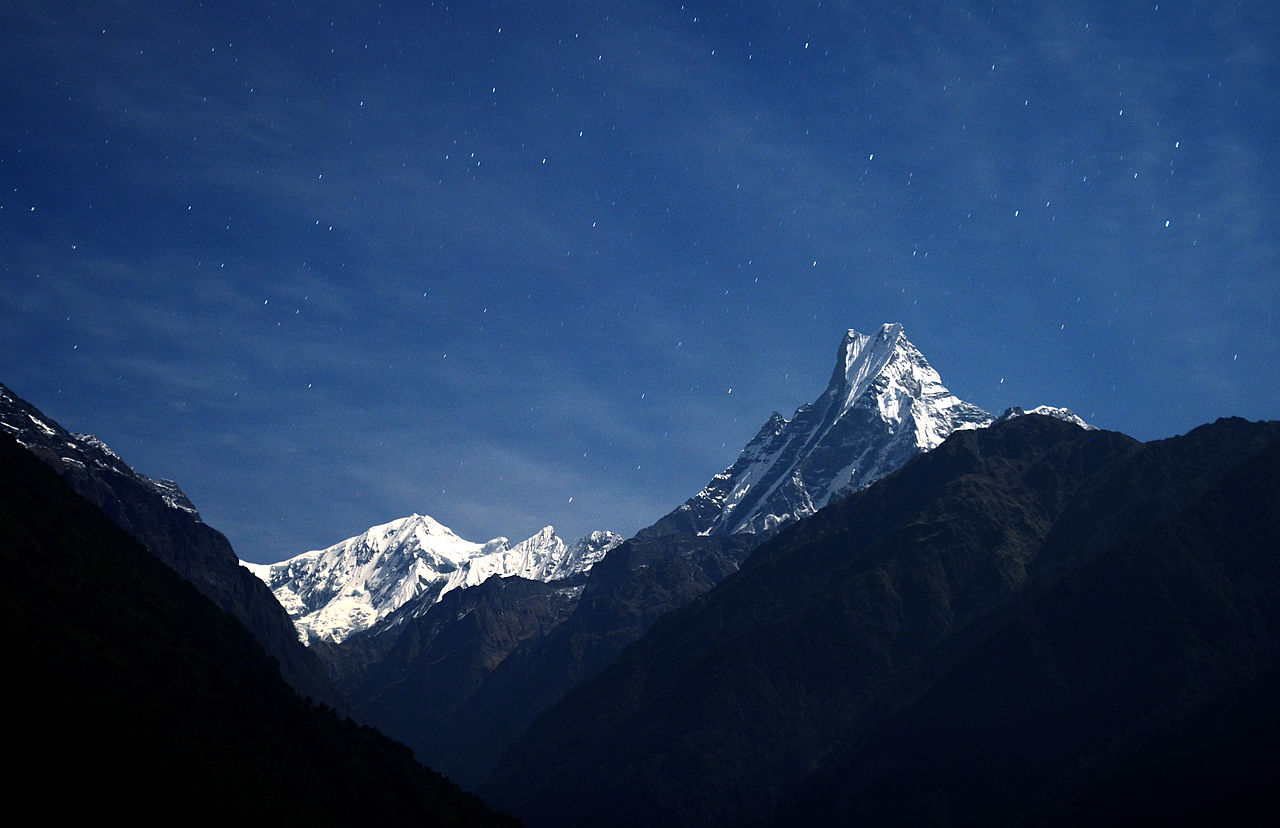 Across the Himalaya, from Ladakh to Bhutan and beyond into the Tibetan Plateau, inhabitants have various names for the enigmatic beast. 'Yeti' itself is a Sherpa word meaning 'man of the rock'.Credit: Mohan K. Duwal/Wikimedia Commons, CC BY-SA 3.0

This article was originally published on December 17, 2017, and was republished on February 20, 2018, with some new information.

The large shaggy beast terrorised generations of mountain people. Around campfires in the Himalaya, residents shared stories of the yeti’s shenanigans. It stinks, they said, and it walks on two legs. It attacks livestock and people. It’s an animal; it’s a man. Ever since mountaineers and travellers through these remote areas returned with these stories in the 19th century, the yeti has gripped the imagination of the outside world. A misinterpretation of a corrupted Tibetan word gave us another name, ‘The Abominable Snowman’.

Arguably the world’s greatest mountaineer, the first to climb 14 peaks above 8,000 metres without oxygen, Reinhold Messner didn’t escape its hold. Even though another mountaineer, Eric Shipton, photographed an enormous human-like footprint in the snow at 5,700 metres in 1951, it wasn’t until 1986 that Messner took the myth seriously. While trekking in eastern Tibet, he had a close encounter with the bipedal creature. It whistled at him before disappearing among the trees. Messner then spent 12 years obsessed with unravelling the identity of the mythical beast. After considering all the shreds of evidence, he concluded the biological basis of the yeti was a bear in his book, My Quest for the Yeti: Confronting the Himalayas’ Deepest Mystery.

Bears readily stand upright on their hind legs to get a clear view. It is conceivable that this bipedal shaggy animal is the origin of the yeti legend. But what species of bear could it be?

Tales of the yeti aren’t restricted to Tibet. Across the Himalaya, from Ladakh to Bhutan and beyond into the Tibetan Plateau, inhabitants have various names for the hairy, stinky biped. ‘Yeti’ itself is a Sherpa word meaning ‘man of the rock’.

“The term Yeti is not commonly used in High Asia,” Messner told The Wire. “A British journalist (ca. 1930) made it up and brought it to Europe with the myths of the snowman. In Asia there were other names and other imaginations for this. But all those legends find their equal in nature – not a human, but the Tibetan brown bear.”

(Messner’s original statement was in the German and was translated to English by Jennifer Pastorini.)

Harry Marshall, the creative director of Bristol-based Icon Films, has had a longstanding fascination for the yeti. About the time Messner’s book came out, Marshall was in Bhutan making a film on its natural splendour. At the end of the day, when the crew members gathered around the campfire, Nado, the yak herder, regaled them with tales of the yeti. Every morning, he put on Marshall’s Gore-Tex hiking boots while doing chores around the camp. At the end of the trek, Marshall agreed to trade his boots for the pelt of a yeti. Nado raced uphill to a monastery and hauled a stinking brownish fur that Marshall describes was the size of a double bed. The latter didn’t want to take the thing back to the UK, so instead, he snipped off a bit from a corner. You can read an entertaining account here.

Marshall sent the sample to Bryan Sykes, a pioneering molecular geneticist at the University of Oxford. “If this is from a yeti, then the yeti is a bear,” Marshall recalls Sykes telling him over the phone. “But it’s not a bear we know. It doesn’t match anything we have in the GenBank.” GenBank is a database of genetic material from hundreds of thousands of organisms.

The filmmaker approached Channel Four to fund another film expedition to Bhutan to find more evidence. In the far northeast of the country, the film crew met the royal migyur (Bhutanese for yeti) hunter who led the way to a bamboo forest that had a lot of brown bears. Marshall remembers seeing many villagers with terrible disfiguring scars from being mauled by these animals. The hunter pointed to a large hollow tree and said, “This is where the yeti sleeps.”

“It was a bear den,” recalls Marshall.

He sent reddish-brown hair that had snagged on the tree trunk to Sykes. Sykes analysed it along with many other samples sourced from museums and collections. What he found stoked controversy. 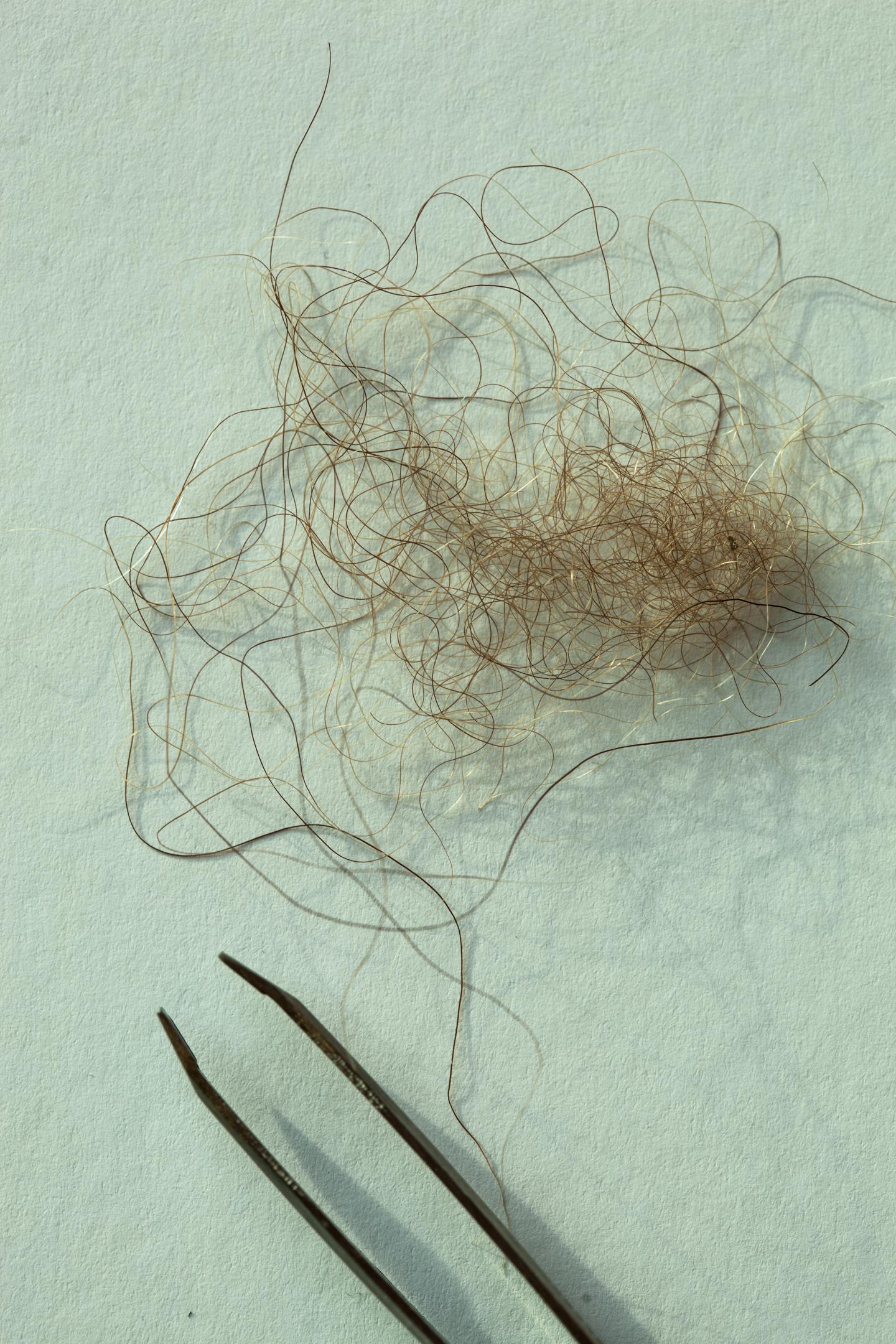 The hair sample that was said to have come from a yeti. A Jesuit priest spotted it in the mountainous region of Nepal in the 1950s. Credit: Icon Films

He matched a short sequence of mitochondrial DNA from the Bhutanese sample and a 40-year-old sample from Ladakh to the fossil of a Pleistocene polar bear that was more than 40,000 years old. He and his colleagues suggested this preliminary finding could indicate an unknown bear species, a differently coloured polar bear or a brown-polar bear hybrid. How could polar bear genes be found so far from their current range? The researchers suggested the hybridisation occurred in the distant past, when polar bears and brown bears went their separate ways about 500,000 years ago.

Other scientists contested these conclusions, saying the DNA fragment was too short to differentiate between closely related species such as polar and brown bears.

In 2014, Marshall produced a three-part series called The Big Foot Files. The last film, Yeti: Myth, Man or Beast, directed by Stephen Gooder, set out to investigate this strange bear with evolutionary biologist and bear geneticist Charlotte Lindqvist of the University at Buffalo, New York.

The film crew sourced three samples from inhabitants of Upper Mustang, Nepal. A livestock herder found a hair sample of a yeti that had killed and eaten two of his animals. Another sample came from an amchi, a traditional healer, who took a femur from a rotting decapitated carcass of a yeti in a cave. And a third sample came from an ancient dilapidated palace that had the shrivelled hand of one.

Messner donated additional samples from a Nazi-era yeti. In 1938, under the patronage of Heinrich Himmler, ornithologist Ernst Schäfer went on an expedition to Tibet. He shot a yeti and stuffed the carcass with its left arm raised in a Nazi salute. Hearing of Messner’s obsession with the yeti, Schäfer’s widow gave this strange looking trophy to him. He, in turn, donated a tooth and hair samples from this creature as well as other samples he had collected on his own yeti expeditions for scientific analysis.

In addition, Lindqvist and her team obtained 15 other samples from museums. The results of this study, funded by Icon Films, came out last month.

Most of the yeti samples belonged to two bear species: the Himalayan brown bear and the Tibetan brown bear. The hand belonged to an Asian black bear. Only the tooth from the Nazi trophy didn’t belong to a bear. It came from a less exotic source: a dog.

Lindqvist and her colleagues used this opportunity to investigate the distribution of brown bears and reconstruct the relationships to their close relatives. The difficult terrain had not only made studying these animals difficult, but it could have also isolated them for hundreds of thousands of years.

By examining mitochondrial DNA inherited down the maternal line, the researchers redrew the map of brown bear distribution. The pale reddish-brown Himalayan brown bear, closely related to the Gobi bear, is probably found in western Himalaya and Central Asia. The darker Tibetan brown bear with a light-coloured head may lord over the eastern Himalaya and the Tibetan plateau.

“Our results suggest that brown bears in the Himalayan mountains and brown bears roaming the high altitudes of the Tibetan Plateau belong to two genetically isolated populations that have been separated from one another for many thousands of years, despite their relative geographic proximity,” Lindqvist told The Wire.

Lindqvist and her team also estimated when these bears could have diverged and become distinct subspecies.

About 658,000 years ago, sheets of ice creeping across the land may have isolated a population of brown bears in the western Himalaya that eventually became the Himalayan brown bear. When the climate warmed and the landscape turned warm and wet, Eurasian brown bears and Asian black bears from the lowlands scrambled up high into the Tibetan plateau and the eastern Himalaya. Another glaciation event then cut these populations off, leading to what became Tibetan brown bears and Himalayan black bears. Impassable mountain peaks didn’t allow the two brown bear subspecies – the Himalayan and Tibetan – to meet.

“I am hoping to follow up with nuclear genome sequencing, so we can get a more complete picture about the evolutionary history of bears in this part of the world and their connectivity to other bear populations,” says Lindqvist.

“This study represents the most rigorous analysis to date of samples suspected to derive from anomalous or mythical ‘hominid’-like creatures, strongly suggesting that the biological basis of the yeti legend is local brown and black bears,” conclude the authors. By ruling out polar bear provenance, this finding confirms what Messner and some others had already concluded about the yeti.

Is the yeti then nothing more than a brown bear? 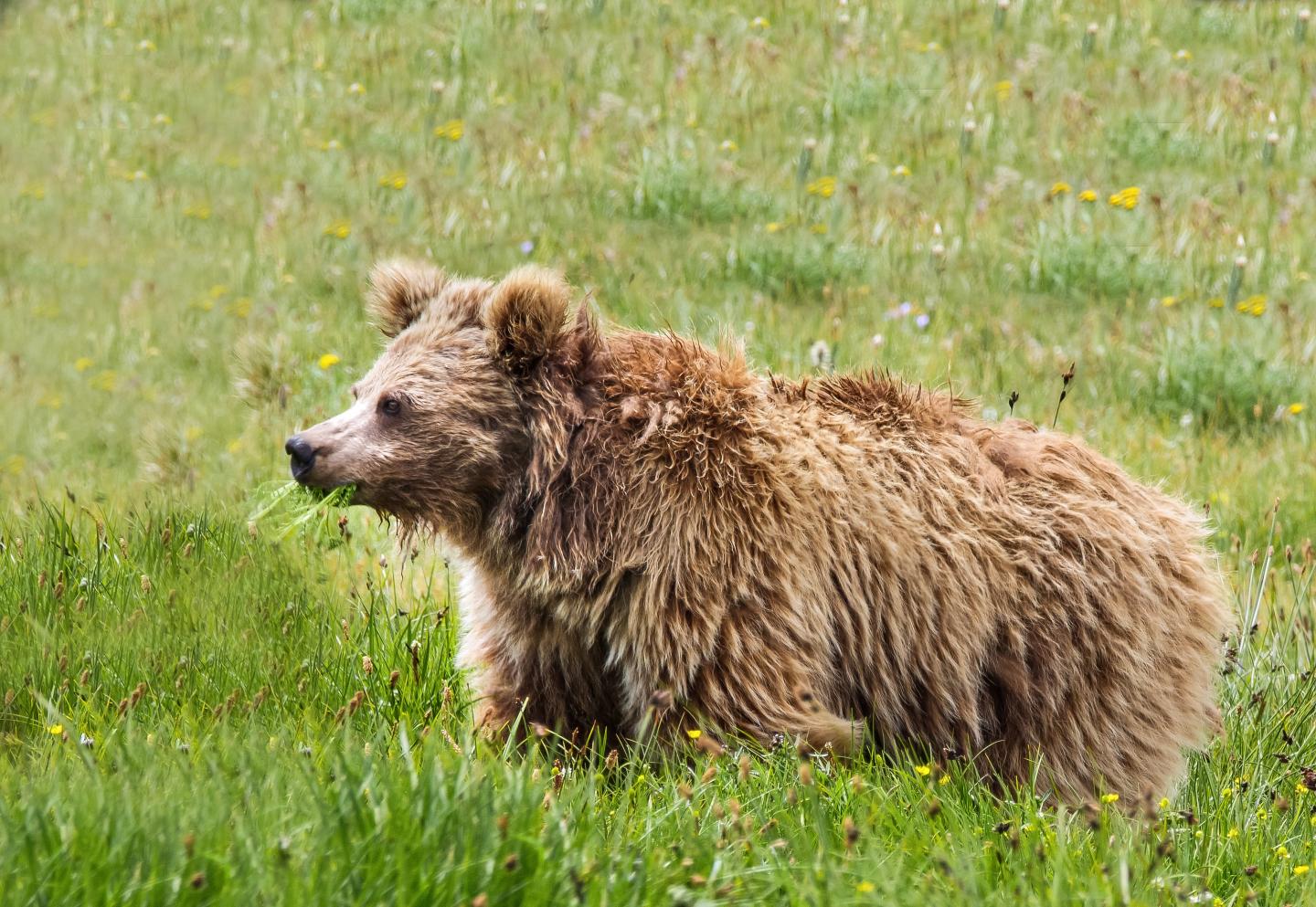 Steve Gooder offers another hypothesis in his film, Yeti: Myth, Man or Beast, involving an entirely different being: the Denisovans.

Like the Neanderthal, the Denisovan is a closely related extinct species of human, which is known from a couple of teeth and a finger bone retrieved from a cave in southern Siberia, and shards of skulls from Central China. The Sherpa and Tibetans derived their astonishing capacity to live and toil in the high mountains without suffering fatal consequences from this ancient lineage of humans. They possess one remarkable gene, EPAS1, that no other community in the world – not even the Andeans – have.

Could these long-deceased Denisovans live on as the yeti in the oral traditions of the Himalaya and Tibet?

Gooder suggests that, just as the brown bears holed up during glaciation events, it may be possible that a relict population of Denisovans lasted in the mountain fastness even as the species went extinct elsewhere.

The hostile conditions of the Tibetan Plateau resisted human colonisation for several millennia. By dating fossilised handprints and footprints, researchers dated the first permanent settlements to between 13,000 to 7,400 years ago.

Rasmus Nielsen of the University of California, Berkeley, is the senior author of the study that discovered how the Sherpas and Tibetans got their unique high altitude adaptation. He says the latest probable interbreeding between Denisovans and ancestors of Tibetans would be 7,000 years ago. “It is more likely to be 40,000 to 50,000 years,” he told The Wire.

Could encounters with the last of the Denisovans be the source of the persistent tales of a mysterious man-ape? One crucial strike against this theory is the lack of evidence. Archaeological explorations in the Tibetan Plateau and the Himalaya are few, and no fossils of these humans have turned up.

Until something tangibly Denisovan nudges these speculations into the realm of reality, brown bears are the closest we have to the yeti.

The brown bear study was published in the journal Proceedings of the Royal Society B on November 29, 2017.

Note: This article was updated on February 20, 2018, to include a comment from Reinhold Messner.