A Brief History of Earth: The Rock From Space That Wiped Out the Dinosaurs – and Much Else

The asteroid chunk was nearly 15 km in diameter and hit Earth at faster than 20 km per second – imagine a Mt-Everest-sized rock slamming down from space at Mach 58. 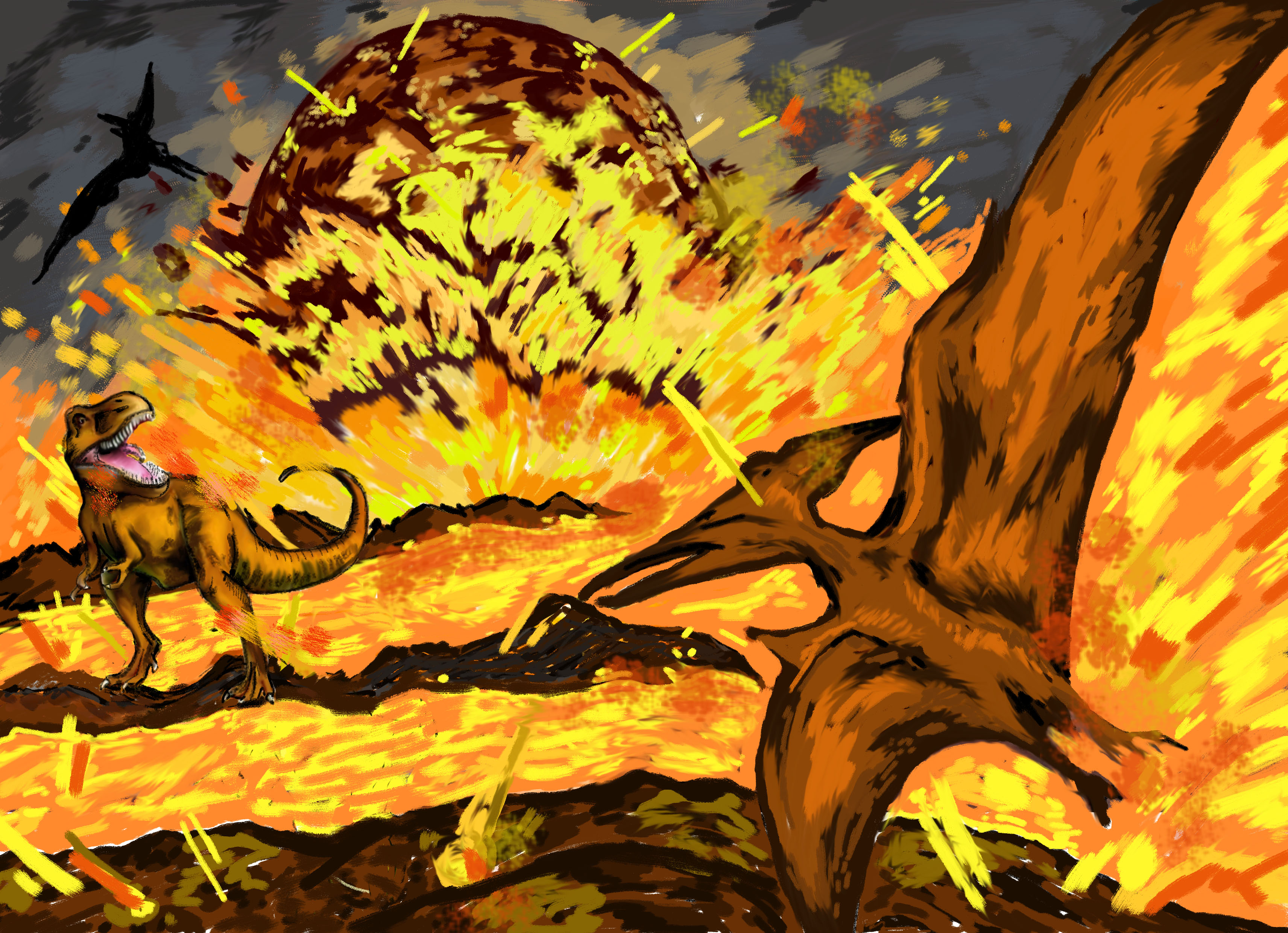 Until now: Dinosaurs roamed Earth at the peak of their population. Small mammals were spread throughout the world. The ancestors of birds and reptiles had split from their common dinosaur ancestor. The continents in the northern hemisphere had almost entirely taken the same shape as today, while Gondwana was still splitting up.

Earth gets hit by hundreds of meteorites every year. These strikes are spread all over the planet’s surface. As they rocket towards Earth, and begin to pass through our atmosphere, the larger ones always break down into smaller chunks thanks to the intense friction and heat during entry – while the smaller ones crumble into minuscule particles or dust. And in this phase, they put on a show of light. There’s either a blazing fireball or a meteor shower. Meteor showers are mostly regular events because a comet or an asteroid in space travels in a specific orbit. As it moves further away from the Sun, ice builds up on its surface. And as it returns, getting closer to the Sun, heat from the star whips the ice and dust into a tail left trailing the object. This trailing material either moves slowly in the rock’s wake or simply gets suspended in space. And when Earth reaches this suspended dust, they fall towards the surface while we get showers.

Meteorites are not hard to find if we know where to look and how to identify them. While most of them end up in the ocean – because our planet is covered with so much water – several do touch down on land. As they burn up on their way down, they acquire a black coating that makes what would otherwise have been a distinctly alien-looking thing appear like any other rock on Earth. Most people don’t even spot them for what they are when they do. However, they do stand out against landscapes that are lighter in colour. This is why meteorites are easily spotted in Antarctica or the Sahara desert.

We have a large quantity of meteorites from the moon and Mars. These were pieces of rock that were floating about in space after collisions with the larger bodies billions of years ago. We can positively identify the source and age of a meteorite by looking at its composition, structure and its weathering. As it happens, the greatest source of meteorites on Earth is the asteroid Vesta, less than a fifth the size of the moon.

Zooming around the Sun between the orbits of Mars and Jupiter, Vesta was once hit by a very large object that left it with a gigantic crater, called Rheasilvia, nearly spanning half its body. This impact didn’t just create the most prolific source of meteorites on Earth, it also melted off a large portion of the surface. The molten liquid was sent sloshing up over the crater’s edges. And when it fell back downwards, it froze midway, forming the Solar System’s tallest mountain.

Most meteorites we talk about are small, tiny stones, ranging from the sizes of raisins to pebbles. Sometimes, however, meteorite hunters may find a larger rock; even more rarely, they may stumble upon something the size of a boulder, a truly unique find for larger rocks are likelier to have disintegrated in the atmosphere or upon impact. The biggest we know about is the nine-metre-wide, nearly rectangular Hoba meteorite in Namibia. It is flat on two sides, so it might’ve skipped in the atmosphere like stones skipping on water. In fact, it had slowed down so much that it is thought to have fallen with a giant thunk and made no crater on the ground. 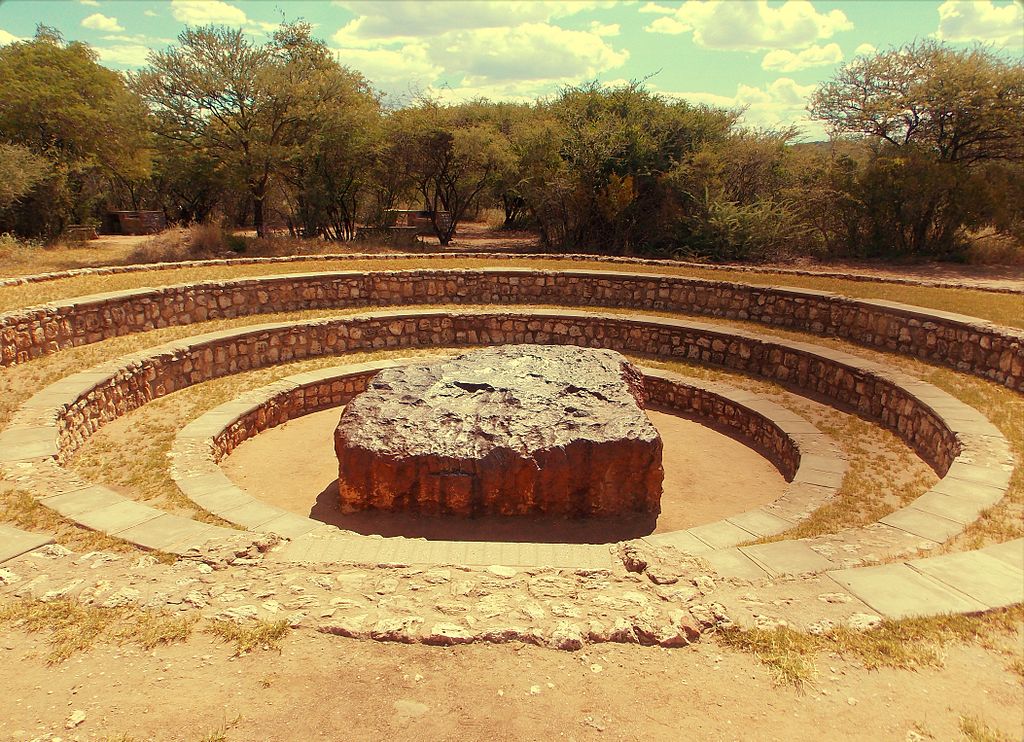 On the other hand, the Chelyabinsk meteorite that fell over a Siberian town in February 2013 caused a lot of damage. The energy released during its entry, breakup and crash was nearly 30-times the output at Hiroshima on August 6, 1945, and injured more than 1,500 people. It was 20 metres in diameter. To get a better sense of how much worse it could’ve been, turn to the Tunguska event from 1908. It remains the strongest event of its kind in recorded history. The meteor flattened nearly 2,000 square kilometres of forest in Siberia despite not even hitting the ground. It has been estimated that the rock that caused it, if a rock did cause it, had to have been about 150 metres in diameter and that it disintegrated some 10 km above ground. There were lots of injuries but no deaths.

Then again, all of these events pale in comparison to one that slammed into the Yucatan peninsula, in modern-day Mexico, about 66 million years ago. It almost completely wiped off the dinosaurs, kicked off planet-wide climate change and heralded a mass-extinction event. Its origins remain unknown to this day but the discovery of its submerged impact crater conclusively points to its size.

The asteroid chunk was nearly 15 km in diameter and hit Earth at faster than 20 km per second – imagine Mt. Everest slamming down from space at Mach 58. Geologists think this is what happened after impact, at a site today called Chicxulub: it shot up tremendous amounts of debris space and created a crater 180 km wide and 20 km deep. The atmosphere was immediately engulfed in dust and smoke. Over the next few hours, all the rocks that were thrown up rained back down, sending sparks flying through the atmosphere. The heat peeling off of them would’ve cooked Earth’s surface to within the temperature at which water boils, rapidly killing off millions of animals and plants.

Meanwhile, winds in the atmosphere would’ve distributed the dust far and wide, trailing over Earth across several kilometres. A large seismic shock from the impact itself would have triggered a mega-tsunami radiating away in all directions. Earthquakes clocking higher than M10 would have reverberated across the planet, like a shiver of terror sent ringing through the geosphere even as, at Chicxulub itself, the continental shelf will have collapsed, killing and burying several million sea creatures. The mega-tsunami hit North and South America, eventually making its way to Africa, pummelling shores with waves over six-times higher than the Mosi-oa-Tunya. The iridium from the asteroid that had been vaporised continued to spread through the air. The dust, smoke and toxic gases from the resulting volcanism also spread, enveloping all of Earth in a hellish cloud.

While animals living in the polar regions might have been safe for the first few days, the acidic thundershowers soon to follow would have killed most creatures that still lived, or strayed, above ground. The darkness would have snuffed out photosynthesis – and with that the food chain. With all plants on land and plankton in water dead, a dark winter in the wake of Chicxulub’s birth would have kicked in.

Within months, over 50% of all species on the planet were thought to have been killed. Within a few years, a full-fledged mass extinction had been underway, with over 75% of all species extinct.

Those few creatures that did manage to survive were small. Anything that depended on living animals or plants for food had died but worms and insects that fed on dead matter lived on. In turn, the tiny surviving mammals fed on them and the avian dinosaurs, on the mammals. Nonetheless, life took nearly five million years to recover. And as fate would have it, Earth would endure one more impact of this scale yet.

Next: Life recovers after a five million years and the last glaciation event sets in. Familiar creatures like mammoths and whales start to make an appearance. All continents assume their current positions, and the stage is set for humans to make their entry.