Scientists think there is a mismatch between the government's rhetoric on bettering India's research output and how much it is willing to spend for the cause. 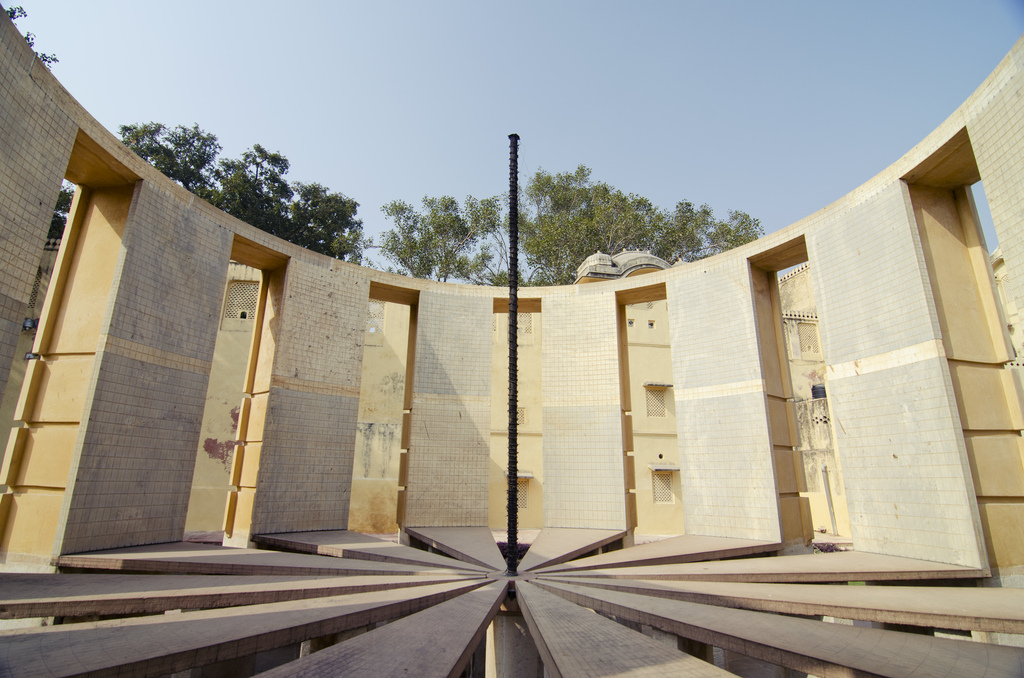 An area of concern is the tendency to not view science education and research from a comprehensive, holistic perspective, which reflects in funding allocations. Above: Jantar Mantar, New Delhi. Credit: Terry Presley/Flickr, CC BY 2.0

Finance Minister Arun Jaitley’s latest budget has evoked mixed reactions from scientists on the very fundamental question of support for basic research. Barely a month ago, on January 3, Prime Minister Narendra Modi vowed at the Indian Science Congress at Tirupati that, by 2022, India would be a major global scientific power. In real terms it would require, at the least, upping India’s science allocations. For over a decade, they have been stagnant at 0.8% of its gross domestic product (GDP) despite oft-repeated announcements to hike it to 2%.

The key ministries and departments engaged in scientific research – the Ministry of Science and Technology, the Department of Atomic Energy (DAE), the Department of Space and the Department of Earth Sciences together received Rs 34,759.77 crore, or only an 11% increase. After factoring an inflation rate of 5.6%, the hike is effectively worth only 6%.

The Ministry of Science and Technology has three component departments: the Department of Science & Technology (DST), the Department of Biotechnology (DBT) and the Department of Scientific and Industrial Research. The DBT received Rs 2,222.11 crore, a relatively decent hike of 22% that will help it continue with its ambitious national biotech strategy, announced on December 31, 2015, which aims to replicate the country’s success in the IT sector in the biotech sector, and increase turnover from the sector to $100 billion by 2025 from $7 billion in 2016.

“Such announcements from the highest quarter constantly give hope to scientists, about possible increased allocation to S&T sectors. However, when the budget allocation comes, every year scientists get disillusioned as we get to know the actual distributions,” Krishna Ganesh, director of the Indian Institute of Science Education and Research (IISER), Pune, told The Wire.

On the other hand, DST secretary Ashutosh Sharma said he was not disappointed because his department received substantial hikes in the last two budgets and which helped it launch 16 new initiatives. And he believed the current allocation would let the department continue with them. DBT secretary K. VijayRaghavan also expects that this year’s allocation will help continue implementing the department’s national biotech strategy.

Then again, notwithstanding the hike for the department itself, the country’s biotech industry is not enthused. “So far nothing path breaking to suggest bold budget,” tweeted Kiran Mazumdar Shaw, managing director of Bengaluru-based Biocon, Ltd. Utkarsh Palnitkar, head of the life sciences division at KPMG India, agreed, adding that the sector had received no specific impetus as such.

Scientists are also divided over what the current science funding means for India’s basic science research.

For one, VijayRaghavan said that “it is upto the individual departments to prioritise their basic research” with the funds they receive. Joining him is Sri Krishna Joshi, an emeritus scientist at the National Physical Laboratory, New Delhi, and the former director general of the Council for Scientific and Industrial Research (CSIR), who thinks it is pointless doing “just basic research of mediocre kind, and not backing it with applied, developmental focus. We need to have a balanced view of fundamental research and development.” He also thinks that the latest allocations have been rightly divided between departments depending on whether or not they’ve showed results.

Others, however, strongly disagree. Ganesh points out that, in the last five or ten years, India has expanded its number of scientific institutes, as well as its pool of talented young scientists, thanks to the establishment of more IITs, IISERs, central universities, NITs and IIITs, under the Ministry of Human Resources Development, points out Ganesh. The addition of about 1,000 talented, young, foreign-trained scientists to the nation’s pool “has opened up opportunity for India to join higher league of nations in advanced basic sciences and research. However this dream remains elusive when we look at our budget allocations for higher education and S&T every year.”

Ganesh also observes that, while the IITs have received a big boost – up from Rs 4,953 crores in 2016-2017 to Rs 7,171 crores in 2017-2018 – “there is negligible enhancement in budget for science IISERs, Indian Institute of Science (IISc), Bengaluru, and central universities that produce the majority of quality basic research.”

Also read: IITs and NITs gobble up 87% of hike in higher education budget

Gautam Desiraju, a professor of chemistry at IISc, says, “In any model anywhere in the world, the best research comes from educational institutions such as the universities. But it is not so in India. Our universities are lagging behind. We cannot rely just on central universities, IITs and IISERs.”

And while the IITs have received a boost, the IISERs have not. “Funding is actually negative for IISERs, down from Rs 720 crore [in 2016] to Rs 600 crore this year, including an additional IISER at Behrampur,” says Ganesh, who describes the cut as being “unfair”. “It is distressing for scientists in India. As such, the per capita expenses on Indian scientist is very low in global terms – the total S&T budget of the DST is less than that of Stanford University. Despite this, Indian scientists have continued to do well globally in terms of scientific output.”

India’s R&D budget, excluding space and atomic energy, “is not increasing proportionately anywhere near the number of scientists that we have added to the nation’s pool,” he adds.

“The complete de-linking of science and technology with human resource development is not appropriate. Science and education are intimately connected and a sound education in science builds the base for further higher education and research in science.”

Scientists are also concerned over the impact of stagnating funds. “The current mechanism does not help tap the creative genius of individual researchers, because it is not swift, the velocity of funding is miserable and committees are unable to sift the grain from the chaff.” Desiraju also bemoans that “too many of the same people sit in all committees leading to burnout and lack of clear ideas.”

What the country needs is a minimum and additional Rs 2,500 crore per annum (excluding all other establishment costs) across different science departments, according to Ganesh. “This is such a small amount in the country’s macroeconomics. With this amount, investment in any other sector would not fetch a proportionately greater dividend, output, recognition and a global Indian impact.”