The physics Nobel laureates were able to use ideas from geometry to understand exotic forms of matter made possible by the effects of quantum mechanics. 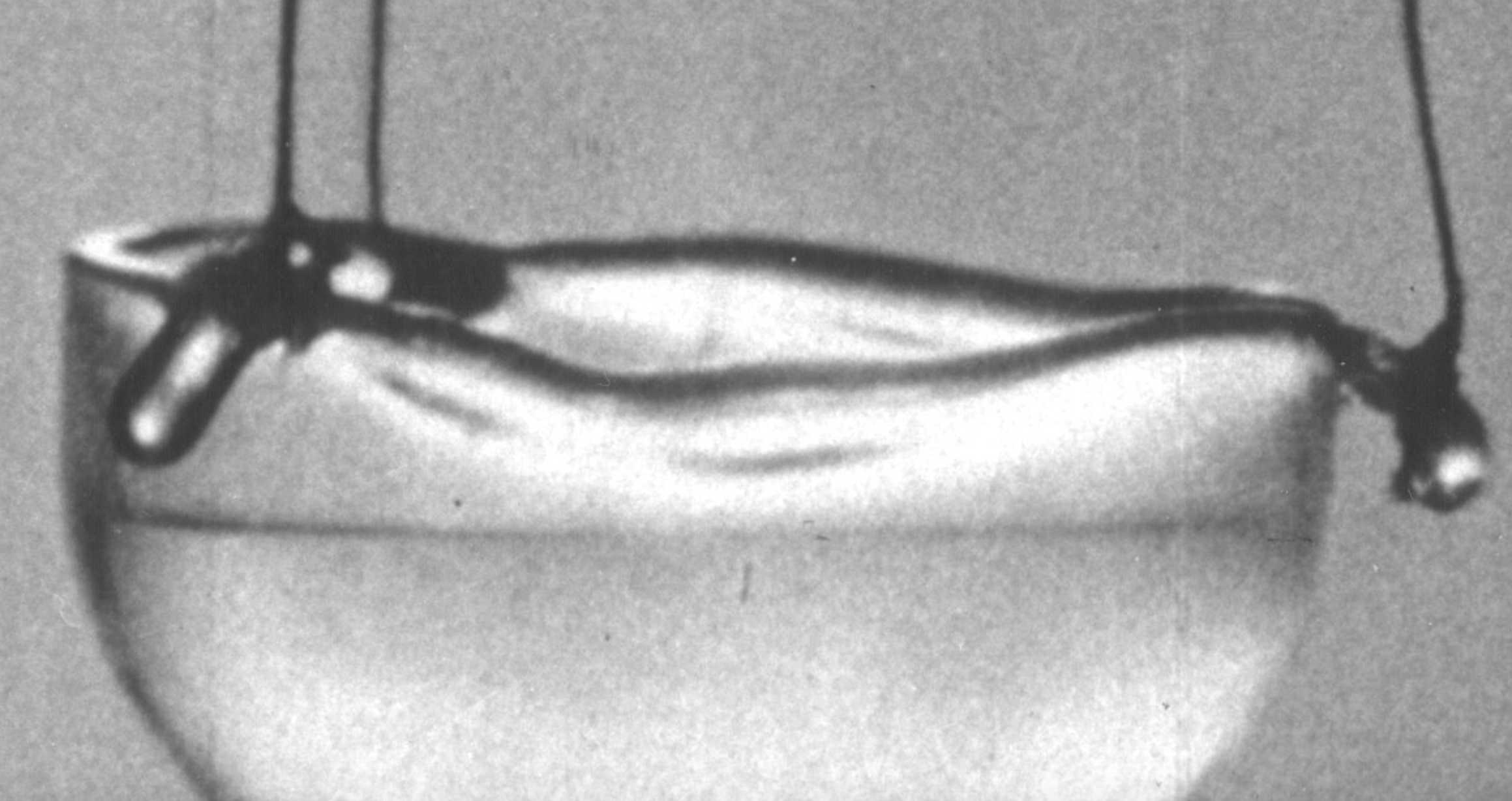 A cup filled with superfluid helium. Because of quantum mechanical effects, the helium will crawl up the sides of the cup in a thin film and collect as a droplet on the outside, and drip below. Credit: Wikimedia Commons

Around the 1920s, a new way to think about the world was emerging among scientists. It couldn’t explain the motion of planets or even affect the day to day lives of people back then. What it could do was explain the extremely small: the world of things the size of an atom, and things even smaller. This ‘new way’ we know today as quantum mechanics. The word ‘quantum’ refers to a packet of energy of a fixed size, and quantum mechanics explains what happens when many such packets, sometimes called particles, come together and interact.

Over time, physicists were able to clarify what kinds of behaviour quantum mechanics did and didn’t allow. It started to become clear that the world of the very small was extremely different from the world of the very big. The ‘very big’, it seemed, was easy to intuit. The ‘very small’, on the other hand, was just plain weird. It allowed particles to move and behave in ways that defied common sense, so much so that Albert Einstein – a master of the ‘very big’ physics – refused to believe that quantum mechanics was a complete theory. And to make matters difficult, the seeming intricacy of its underlying theories constantly slowed attempts at distilling any sense of simplicity out of them.

The 2016 Nobel Prize for physics recognises a set of breakthroughs starting in the 1970s that breached parts of the complexity barrier using techniques borrowed from mathematics. Specifically, the new laureates – Duncan Haldane, John Michael Kosterlitz and David Thouless – were able to use ideas from geometry to understand some exotic forms of matter made possible by the effects of quantum mechanics. They were able to provide their peers with a set of techniques that could be used to explain why the forms behaved the way they behaved, and build upon their results to think about applications.

The efforts of the trio is exemplified by a famous experiment that two of them, Kosterlitz and Thouless, performed in the 1970s. Their goal was demonstrate that the theories of their time that were used to explain the properties of superfluids were incomplete. Superfluids are fluids that flow with zero viscosity; liquid helium is a notable example: it can even flow up walls. This is explained by the fact that helium atoms start behaving like the fundamental particles called bosons at very low temperatures, forming a so-called Bose-Einstein condensate. The theoretical foundation for this was developed by Satyendra Nath Bose and Einstein in 1924.

In this state, all helium atoms are identical, and indistinguishable in terms of their properties alone. And in this state, the helium starts flowing with zero viscosity. So Thouless and Kosterlitz set out to find if flat surfaces, like that of liquid helium, could be made to behave weirdly in an as yet unpredicted way. And surprise, surprise, they did – through a phenomenon called the Kosterlitz-Thouless (KT) transition.

There are four popularly known phases of matter: plasma, gas, liquid and solid. If you cooled plasma, its phase would transit to that of a gas; if you cooled gases, you’d get a liquid; if you cooled liquids, you’d get a solid. If you kept cooling a solid until you were almost at absolute zero, you’d find substances behaving strangely because, suddenly, quantum mechanical effects show up. These phases of matter are broadly called quantum phases. And their phase transitions are different from when plasma becomes a gas, a gas becomes a liquid, and so on.

A KT transition describes a type of quantum phase transition. A substance in the quantum phase, like all substances, tries to possess as low energy as possible. When it gains some extra energy, it sheds it. And how it sheds it depends on what the laws of physics allow. Kosterlitz and Thouless found that, at times, the surface of a flat quantum phase – like the surface of liquid helium – develops vortices, akin to a flattened tornado. These vortices always formed in pairs, so the surface always had an even number of vortices. And at very low temperatures, the vortices were always tightly coupled: they remained close to each other even when they moved across the surface.

The bigger discovery came next. When Kosterlitz and Thouless raised the temperature of the surface, the vortices moved apart and moved around freely, as if they no longer belonged to each other. In terms of thermodynamics alone, the vortices being alone or together wouldn’t depend on the temperature, so something else was at play. The duo had found a kind of phase transition – because it did involve a change in temperature – that didn’t change the substance itself but only a topological shift in how it behaved. In other words, the substance was able to shed energy by coupling the vortices.

Topology is the study of the geometrical properties of an object that don’t change when the object changes in shape or size. For example, all donuts, whether they’re big or small, or square or circular, have only one hole. So all donuts are topologically similar. In the same vein, this is why the KT transition is called a topological phase transition: a quantum phase at a higher temperature will have free vortices, while a quantum phase at a lower temperature will have coupled vortices. The difference in the amount of energy between these two states has since been attributed to their different topologies. Thouless in particular has been credited with exploring how topological changes bring themselves to bear on the behaviour of quantum mechanical systems – the ‘very small’, as it were.

In 1983, Duncan Haldane built on Kosterlitz’s and Thouless’s ideas to uncover weird properties of chains of magnetised atoms. And then, in 1988, he extended their ideas and made a strange theoretical prediction that surprised (again) many of his peers.

In 1879, a 24-year-old physicist named Edwin Hall was performing an experiment at the Johns Hopkins University, Baltimore, as part of his doctoral dissertation. He had an electrical conductor along the length of which he’d managed to create a voltage. As a result, there was some current flowing through the conductor. Then, he applied a magnetic field perpendicular to the conductor, and got ready to check if there was a voltage along the breadth of the conductor as well. To his surprise, there was. His discovery took the wider world by storm because it came 18 years before the electron was even discovered. This phenomenon is called the Hall effect.

In 1980, Klaus von Klitzing repeated Hall’s experiment with two differences. First, he used a very thin sheet of electrons to conduct charge. Second, his experimental apparatus was maintained at a very low temperature, close to absolute zero. He found that he was able to get the same results that Hall had found. But within those results hid another discovery. The ease with which the electrons could flow through the conductor, called the Hall conductance, seemed to change in very fixed amounts when the magnetic field was weakened. This persisted even when Klitzing decreased the amount of electrons in the conductor or changed the conductor itself.

A faint analogy would be this: if quantum mechanics described matter in terms of small but fixed packets of energy, it also defined properties like conductance and resistance in similar packets.For this finding, called the quantum Hall effect, Klitzing was awarded the Nobel Prize for physics in 1985. But it was Thouless’s theoretical insight that allowed him to understand what really was going on. In the donut example, all donuts in the world are similar because they have a topological invariant of ‘one hole’. Further, any other geometrical shapes could only have a fixed, integer number of holes: 1, 2, 3, …, but never 1.5 holes. Similarly, Thouless interpreted the Hall conductance to be a topological invariant.

Three years later, Haldane extended Thouless’s findings and provided a twist to the Klitzing experiment. He theorised that the quantum Hall effect would be observed even if there was no magnetic field because of topological phase transitions in the very-cold two dimensional gas of electrons. Put another way, he was suggesting that a substance could order itself using quantum mechanical principles as opposed to the classical ordering of matter in phases like solids and liquids. Haldane’s prediction was experimentally verified in 2013, and it made for yet another success for quantum topology.

Altogether, the theoretical work of Haldane, Kosterlitz and Thouless has given rise to a proverbially rich arena of research in condensed matter physics, one in which physicists can leverage the spatial oddities of the very small to build things that in scope can be very big. The predictions made by the theories that they developed has resulted in strange engineering products like topological insulators, which conduct electricity only on their surfaces but remain insulators on the inside. These products have received renewed interest as physicists have started to realise their potential for use in quantum computers and for finding particles that are their own antiparticles.

Haldane and Kosterlitz will each receive a fourth share of the prize while Thouless will take a half. The total prize money is around $931,000 (Rs 6.19 crore). Along with their citations, each winner will also receive a gold-plated medal. A sober reminder at this point is necessary: after today, the total number of Nobel physics laureates climbed to 204 but the number of women among them continues to stay at two. Marie Curie won in 1903 and Maria Göppert Mayer, in 1963. The physics prize’s ignoring the contributions of women has been so bizarre.