What Do You Do When Palaeontology Itself Is Endangered in India?

There are few researchers and fewer teachers studying vertebrate and invertebrate palaeontology – leading some to wonder if India’s story of the evolution of life will continue to be written for long. 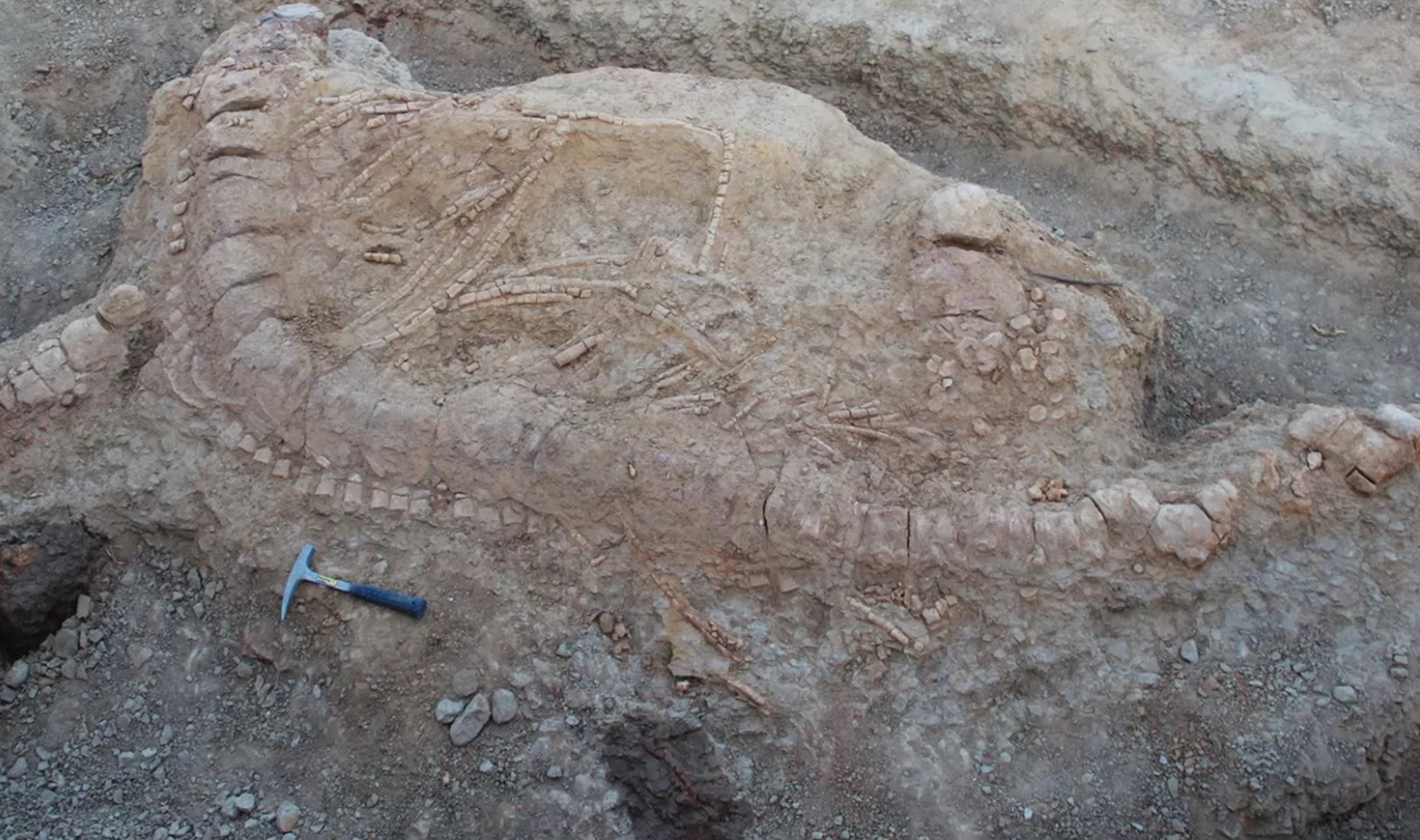 A field photograph of the excavated ichthyosaur skeleton in the Katrol Formation near Lodai village, Gujarat. Caption and source: PLOS

There was a lot of excitement when a big fossil was recently discovered in the Kutch region of Gujarat by a team of Indian researchers. However, the very science of palaeontology – the study of fossils to trace the evolution of life on Earth – could be dying in India. Veterans in the field are concerned that there may not be many fossils being unearthed in the future as there are hardly any openings for a palaeontologist in Indian universities, while the number of students signing up for the subject has also been on the decline.

According to Mahendra Pal Singh, the secretary of the Palaeontological Society of India, about 150 to 200 students pursue a postgraduate degree in palaeontology every year in the country. As for research, only about 15-20 students enrol themselves every year, he continued. And of these, just three or four work on research related to vertebrate/invertebrate palaeontology. The rest work on areas that have commercial applications.

“The future of palaeontology in India is bleak. There are only a few universities where palaeontology is being taught. The number of well known palaeontology centres has diminished for want of faculty,” Singh said. He thinks the course’s difficulty is an important factor: “Students are not opting [for it] because it requires hard field work in hazardous locations.”

But the field itself, as far as Indian lands are concerned, is rich. Ashok Sahni, a pioneering palaeontologist who discovered the first-ever dinosaur fossil in the country, feels India is an exciting place to look for fossils. “There is plenty to be found if only there are people available to look. But they are not there,” Sahni said. “The science would be extinct in this country soon.”

Guntupalli V.R. Prasad, the head of the department of geology in Delhi University and the researcher who led the recent excavation of the big Kutch fossil (an ichthyosaurus) had been Sahni’s student in the University of Punjab.

Sahni continued that the future of the science depended on the government’s attitude. “The question being asked … is if palaeontology can help build a nation. Is archaeology again a nation building exercise? The government does not see it as such – or universities would be appointing teachers in these subjects. Nor is it attracting many students,” he said.

According to researcher Ashok Sahni, applied palaeontology broadly includes branches of study that have commercial applications in climate studies and oil extraction. Such branches include micropaleontology, palaeobiology and palaeoceanography.

No faculty for geology

Other applied courses offered by geology departments in Indian universities are petrology, seismology, geophysics, geochemistry, sedimentology, mineralogy, coal geology, and so on. But a faculty for vertebrate or invertebrate palaeontology is rare. While the IITs in Rourkee and Kharagpur offer it, Jadavpur University, Banaras Hindu University and Punjab University don’t.

Vertebrate and invertebrate palaeontology, both of which deal predominantly with fossil research, do not often lead to jobs as teaching posts are hard to come by. Prasad explained that there are also few experienced teachers, so the odds of finding good mentorship have been getting poorer.

“In well known centres of paleontological teaching and research, such as BHU, Lucknow University, Panjab University, Jadavpur University, etc., the number of palaeontologists has gone down drastically and new, prestigious educational institutions like the IISERs are not showing much interest in hiring palaeontologists,” Prasad said (IISERs: Indian Institutes of Science Education and Research). “So the country has very few palaeontologists working on large invertebrate fossils at present.”

“The problem is with geology departments as a whole across the country. Except in the IITs and central universities, just one or two faculties teach all the subjects coming under geology – and that includes palaeontology,” Saraswati said. “There is no faculty for geology across India. So it is not just palaeontology but all the subjects coming under geology that are taking a beating.”

At the IITs, every subject is taught by a specialist – which is good because, according to Saraswati, “It is difficult for a non-specialist to teach palaeontology.” But in the other universities, “One or two teaching all the subjects in geology is fine till graduation. For post-graduation and research,” that will not be enough.

In other words, palaeontology and its scientists are endangered in India. What makes this situation doubly unfortunate is the fact that palaeontology as such has been receiving more attention in other parts of the world. According to John Flynn, a curator and professor in the division of palaeontology at the American Museum of Natural History, New York, told The Wire, “There is a lot of active training of palaeontologists in the US. Both the Palaeontological Society and the Society of Vertebrate Palaeontology here have large numbers and percentages of student members.”

Sahni, in fact, counts Germany, China and the US as havens for palaeontology research.

Another problem that palaeontologists are facing in India is that there is no place to preserve their discoveries. For example, where will Prasad et al keep their recently found ichthyosaurus?

“The repository of specimens is a major problem. As in western countries, we do not have a ‘Natural History Museum’ for housing prehistoric treasures such as fossils. All specimens collected by the palaeontologists are at present deposited in the university departments where they work,” according to Prasad. “Our only worry is that… Once we retire, what will happen to these specimens? Since they are not properly conserved, they may be lost forever.”

Thus, the ichthyosaur skeleton he helped unearth is currently housed in the department of geology at Kachchh University.

“Most western countries have many national and regional natural history museums that are important repositories for fossil specimens. Therefore, a ‘Natural History Museum’ in India” is needed immediately “to conserve Indian fossil specimens.”

The Natural History Museum in Paris has a collection of five to six million specimens, according to the International Palaeontological Association (IPA). China’s Shandong Pingyi Tianyu Natural Museum (in Pingyu county of Shandong province) possesses the complete fossils of more than a thousand dinosaurs. Flynn said that there are many such museums in the US as well.

Sahni goes a step ahead and thinks India doesn’t have a tradition of saving fossils. “I donated the bulk of my fossils to the Government Museum [in] Chandigarh,” including his dinosaur egg fossils. “I was asked to establish a museum for dinosaurs of India by the then Administrator of Chandigarh, Lt. Gen. Jacobs,” he recalled. “Today, on retirement, I have no specimens with me of any value, i.e., they are not the type of specimens on which taxa are based.”

“In most other countries there are local repositories well-cared-for in universities or in institutes and this is not a problem.”

According to the IPA, there are over 5,000 palaeontologists in the world. Zhong Zhongu, the association’s president, wrote in an email to The Wire, “I think palaeontology is a basic science branch of both geology and biology. It is critical to science education and museum studies everywhere in the world. As a fast growing country, India has great potential to contribute more to the study of palaeontology.”

Sreelatha Menon is a freelance journalist.