Lucy and Psyche are a part of NASA's Discovery Program, whose raison d'être is to explore our planetary neighbourhood using "faster, better, cheaper" missions. 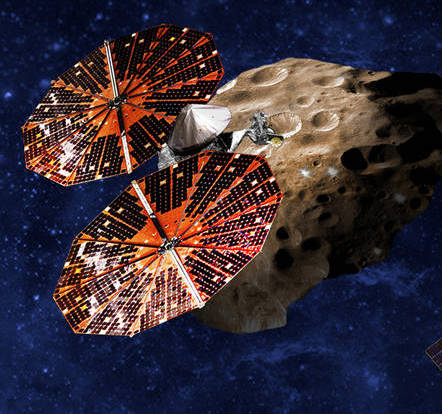 Lucy flying by Eurybates and Psyche, by 16 Psyche, in this artist’s conceptualisation. Credit: SwRI and SSL/Peter Rubin

The selected missions are named Lucy and Psyche as a part of its Discovery Program, whose raison d’être is to explore our planetary neighbourhood using “faster, better, cheaper” missions. The main asteroid belt – between the orbits of Mars and Jupiter – holds a lot of mysteries astronomers are keen to resolve. It is especially instrumental in understanding how planets form because the asteroids are primitive bodies that could have formed a planet had Jupiter not existed.

The Psyche mission will check out an asteroid in the main belt called 16 Psyche. This rock is one of the ten most massive in the belt. It is metallic in nature, leading scientists to believe that it could be the core of a once-Mars sized planet that has since broken up. The most likely scenario that could have caused this is thought to be a violent collision that vaporised the crust but left the core almost intact. Psyche will help understand planetary formation, especially the processes that contribute to the formation of the core, mantle and crust.

The Lucy mission will travel even further out – to Jupiter to examine six Trojan asteroids. Trojans are bodies that are present in Lagrange points. These are places around a planet’s orbit where the opposing gravitational attraction from the planet and the Sun subtract such that the remaining force can be balanced out by the centrifugal force experienced by a smaller body at that point. So when natural bodies (like asteroids) and artificial objects (like space telescopes) wind up at a Lagrange point, they’re aren’t forced away from that position because the centrifugal force they experience squares off against the Sun-planet forces. As a result, they become space-based parking lots. Each body has five Lagrange points. 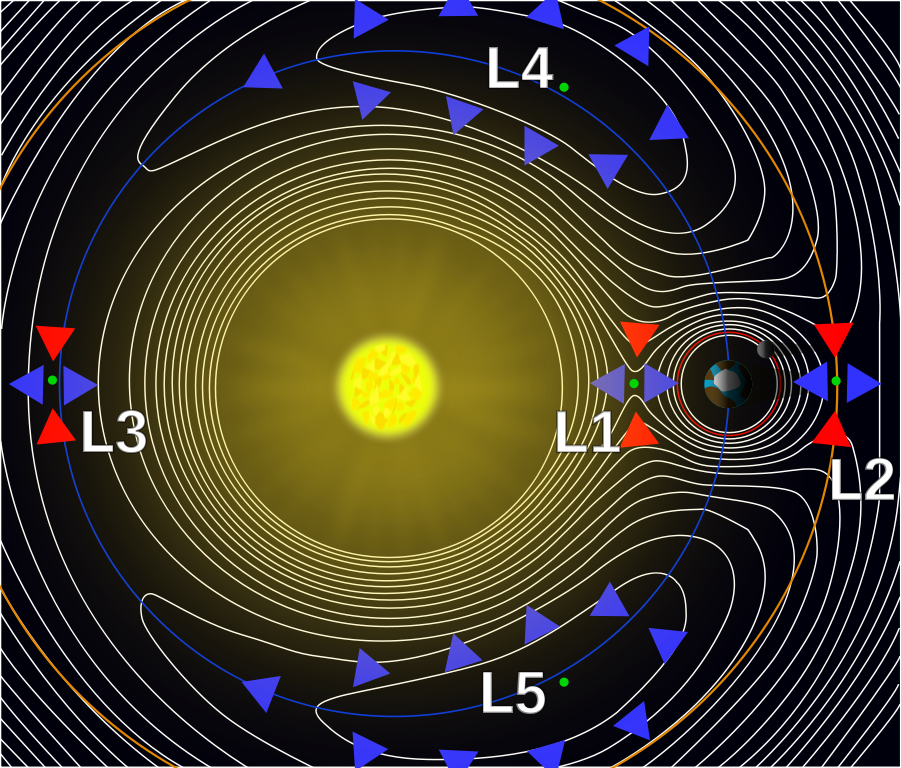 A contour plot showing the positions of the five Lagrange points. The contours depict the intensity of the gravitational field surrounding the planet and the Sun. Credit: NASA/Wikimedia Commons, CC BY 3.0

Jupiter’s trojans are asteroids that share its orbit around the Sun at the L4 and L5 points. Some orbit ahead of Jupiter while some, behind. Nearly all planets have trojans at one or both of these points. Earth and Venus have one trojan each – called 2010 TK7 and 2013 ND15, respectively – while others have more. These trojans co-orbit 60º ahead and behind a planet.

Lucy will first visit the trojans that orbit ahead of Jupiter and fly by four of them: Eurybates, Polymele, Leucus and Orus. The craft will then return to Earth to get a gravity assist by swinging around the planet, and then visit two more trojans trailing Jupiter (Patroclus and Menoetius).

This complex manoeuvre is necessary because the two groups of Trojans are on either side of Jupiter. It would be a long and arduous fuel-intensive task to move the craft from one group to the other, either bypassing the terrible gravitational pull of Jupiter or going all the way around the Sun in a nearly 12-year orbit journey. Flying directly back to Earth, making a U-turn and then visiting Jupiter’s other side offers Lucy not only a short route but also the necessary gravitational kick to speed up on its way back.

The Lucy mission is named after the famous Lucy Australopithecus skeleton that was discovered in 1974. The remains of this female individual belonged to the Hominini species, derived from the same common ancestor as our Homo sapiens and the chimpanzees. Lucy herself was named after the Beatles song Lucy in the Sky With Diamonds, which was playing all day in the expedition camp when the remains were unearthed. The Lucy mission was so named because the trojans are ‘fossils’ of planetary formation and could provide clues into the structure of the early Solar system. Lucy will fly past asteroid 52246 Donaldjohanson, named for the fossil’s discoverer.

Psyche is named after its destination, the asteroid 16 Psyche. It was discovered in 1852 – among the first of its kind to be. It was named after the Greek mythological character Psyche, whose name means ‘soul’.

“This is an opportunity to explore a new type of world – not one of rock or ice but of metal,” said Psyche’s principal investigator Lindy Elkins-Tanton, of the Arizona State University in Tempe, in a statement. “16 Psyche is the only known object of its kind in the solar system, and this is the only way humans will ever visit a core. We learn about inner space by visiting outer space.”

The two missions are the thirteenth and fourteenth Discovery missions to be selected. As the asteroid belt is so far away from us, it will take both missions over five years to reach their destinations. Lucy will launch in 2021 and reach the trojans in 2027. Psyche will launch in 2023 and reach 16 Psyche in 2030. Previous Discovery Program missions have included the Pathfinder (on Mars), Dawn (which visited Vesta and is now in orbit around Ceres) and the Kepler observatory (which has identified over 3,000 exoplanets so far).