Ant colonies put up with inefficient gold bricks in their midst. Did these ants perform an essential service? Did they make themselves useful by relaying messages or acting as living larders? 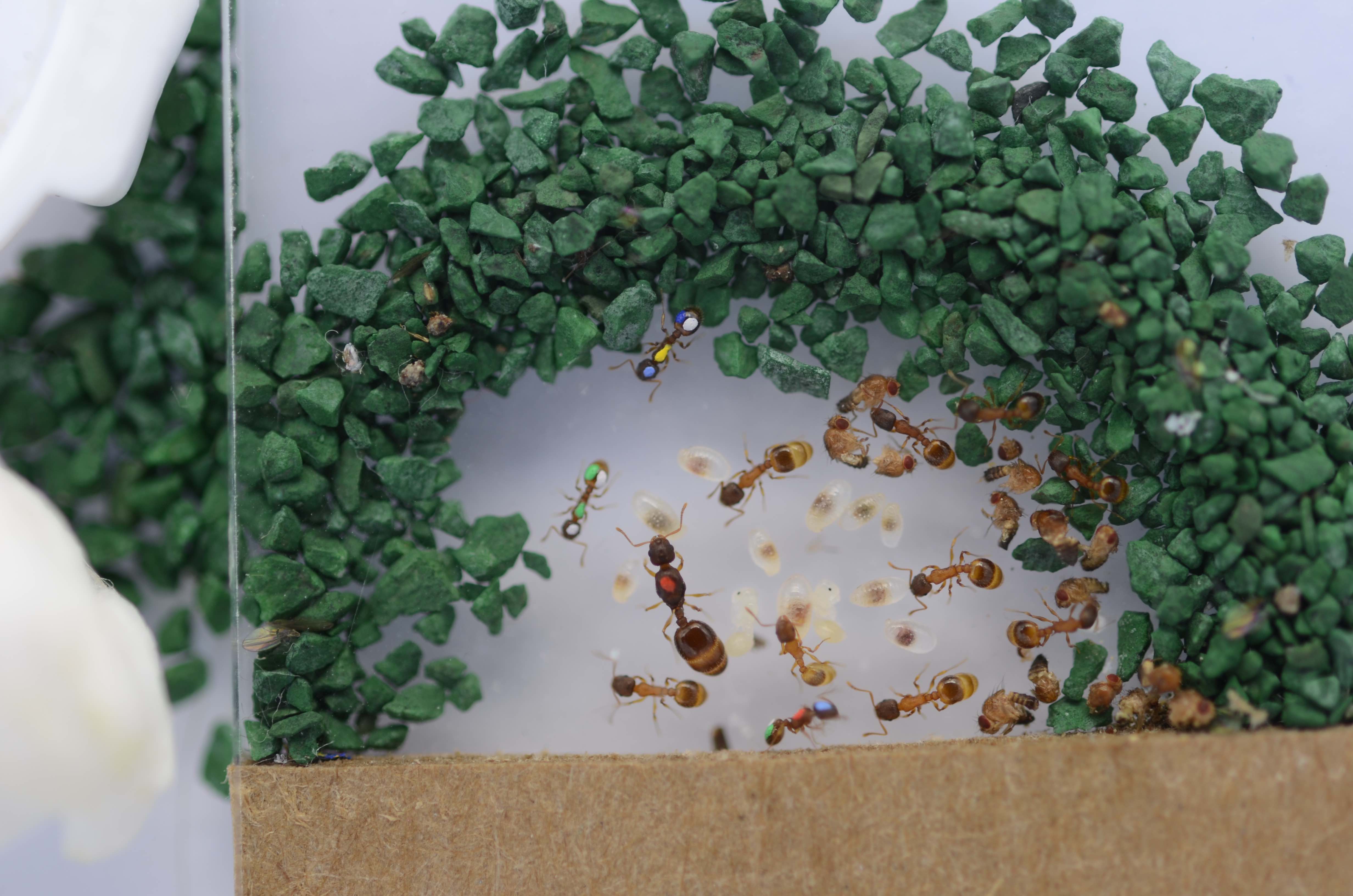 An ant colony in a lab. Credit: Daniel Charbonneau

Ants are the epitome of hard-work and their nests are hives of activity. From dawn to dusk, workers go about their designated jobs – forage for food, tend the young, clean the nest and guard against invaders. But some don’t do anything at all. Daniel Charbonneau and Anna Dornhaus, University of Arizona, Tucson, discovered that these freeloaders weren’t just one or two individuals or even in the minority. At least 50% of the workers did nothing, enough to trip the industrious ones as they ran about their tasks.

“They really just sit there,” Charbonneau said in a press release. “And whenever they’re doing anything other than doing nothing, they do chores around the nest, like a bit of brood care here or grooming another worker there.”

When researchers studying ants and bees removed active workers, the colonies replaced them. But the productivity of the colony suffered. The substitute workers didn’t seem to be very good at their jobs. Perhaps the replacements came from the ranks of these shirkers. Since they did a bit of everything, they may not have had the specialised skills needed to do one job well.

Charbonneau and Dornhaus collaborated with Takao Sasaki from the University of Oxford to determine why ant colonies put up with these inefficient gold bricks in their midst. Did these ants perform an essential service? Did they make themselves useful by relaying messages or acting as living larders?

The researchers collected 20 colonies of Temnothorax rugatulus, a species from a high-elevation pine forest in Saguaro National Park in southern Arizona.

“The main advantage of these ants is that they’re very easy to work with,” Charbonneau told The Wire. “You can collect whole colonies – workers, queens and brood – simply by flipping rocks and looking in boulder cracks. They’re very easy to maintain in the lab in artificial nests and they’re extremely hardy. As a result, they’re a fairly commonly used ant genera in research, especially for laboratory work. This is useful because we have some knowledge of their biology and our results will be relevant for others working on these ants.”

Once the ants had settled down in the lab, the researchers daubed paint in unique combinations on the head, thorax and abdomen so they could identify them in video recordings.

“Individually marking all of the workers (20 colonies with ~100 workers per colony) and analysing the video data that we collected (tracking each individual ant of each colony for every second of multiple videos) was a time-consuming effort,” says Charbonneau. “It was only possible because we had many undergraduate students that were participating in the project.”

Workers work in shifts. Once they are done, they rest. The researchers determined what jobs these ants performed and distinguished between tired workers and slothful ones. They removed 20% of the active workers from five colonies. In response, the remaining workers didn’t increase their workload. Instead, in less than a week, others stepped in to perform their tasks.

The researchers removed 20% of the lazy ones from nine colonies to see how that affected activity levels. The degree of idleness within the colony came down as the inactive ones grew busier. “The top 20% most inactive were significantly less ‘inactive’,” says Charbonneau. But even after two weeks, no new workers filled in for the missing shirkers, although they might have in the long run. 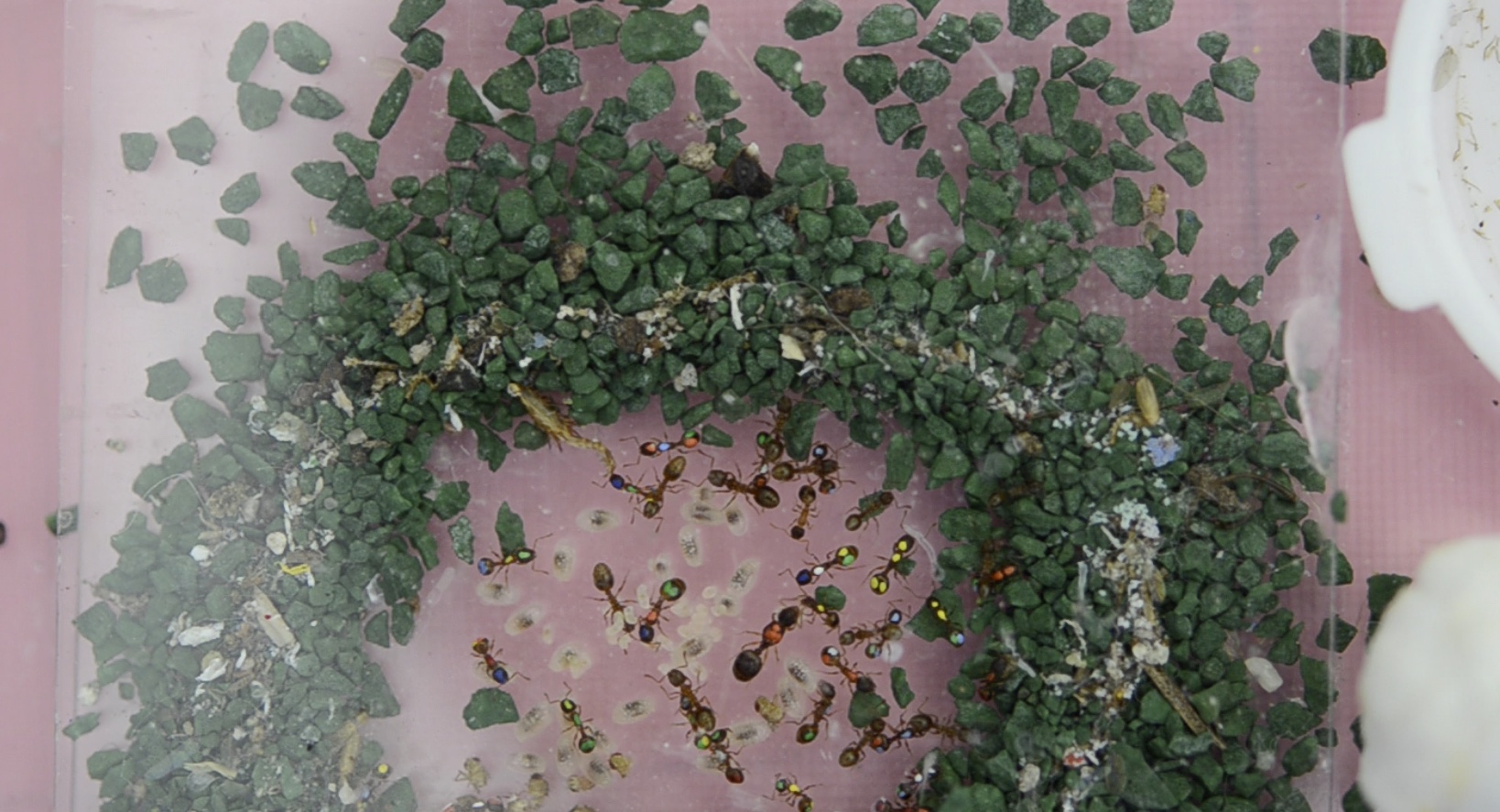 The researchers then removed 20% of randomly selected workers, active and inactive, from six colonies. For a week, the colonies “seemed to be disturbed for a short time span (one week) but seemed to return to normal after about two weeks.”

This means that the lazy ones weren’t performing a necessary service to the colonies. Had they been, they would have been replaced. This suggests they are the reserve workforce, called into action when the active experienced ones die or go missing.

“In our paper, we show for the very first time that inactives can act as a reserve labour force,” says Charbonneau. He also observed that lazy ants had bloated bellies, possibly acting as ‘living pantries’ for their colonies.

“My speculation is this: Since young workers start out as the most vulnerable members of the colony, it makes sense for them to lay low and be inactive,” Charbonneau said in a press release. “And because their ovaries are the most active, they produce eggs, and while they’re doing that, they might as well store food. When the colony loses workers, it makes sense to replace them with those ants that are not already busy pursuing other tasks.”

Although some researchers suspected this, there wasn’t much proof, say the authors. In one study of a Japanese species (Myrmica kotokui), the investigators had to remove all the active workers before the dawdlers swung into action. But unlike the American ant, several busybodies took it easy when researchers removed the lazy ones. Was egg laying such a critical function that workers tending the colonies had to be diverted from their tasks?

In this species, only the queen lays eggs. So the layabouts didn’t even perform this function. The Japanese researchers had another explanation. They say workers react if the impetus to perform a job was great, such as ferry drops of sucrose solution to the nest. If an ant isn’t a specialist at a specific job and has a high threshold for all tasks, it does nothing. If others deal with various tasks, the need to help them is low. But when no one attends to a job, then the urgency level increases, forcing a lazy ant to step up. Since each worker may respond more or less than another, there is an intrinsic inequality in the distribution of work.

“I don’t believe that our hypothesis – that the threshold variance produces inactive workers – is able to explain the presence of inactive workers in all the ant species,” Eisuke Hasegawa, Hokkaido University, Sapporo, told The Wire. Similarly, he suggests acting as reserve labour force may not be the only function of inactive workers. Many mechanisms could generate an unequal distribution of work.

Charbonneau agrees. “Because this is not a widespread function, it suggests that there may be other underlying explanations for inactivity and we don’t yet know what those are,” he says.

While the presence of do-nothings lowers the efficiency of their colonies, they are crucial to the survival of the colony. Some tasks, such as egg cleaning and larval care, are labour-intensive. When the hard-working ants performing these tasks become tired and take a break, others take over. If no one tends the eggs, they could become infected with bacteria. In case a catastrophe strikes the colony and it loses all its active members, the lazy ones keep it going. Any colony with no reserve force may be doomed.

No wonder these ants tolerate the laggards in their midst.

The study was published in the journal PLOS ONE on September 6, 2017.