Kiran Kumar is set to retire as the chairman of ISRO on January 14. In his time, he oversaw the development of the IRNSS, Cartosat, cryogenic engines and reusable launch vehicle technologies. 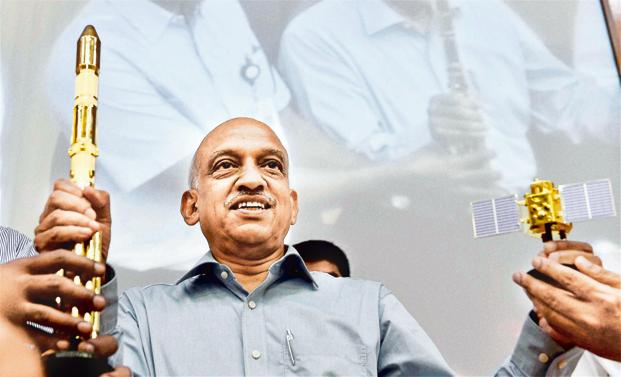 On January 12, the Indian Space Research Organisation (ISRO) launched 31 satellites into various orbits. It included the Cartosat-2F, a reconnaissance satellite, and 30 smaller satellites, 28 of which were for foreign customers.

Shivanand Kanavi spoke to A.S. Kiran Kumar, the chairman of ISRO, for The Wire on reconnaissance, micro- and nano-satellites, satellite-guided aviation, India’s own GPS and Kumar’s journey in space applications. Kumar will retire from his position on January 15 and will be succeeded by K. Sivan.

Shivanand Kanavi: In Cartosat, are there any specialised cameras?

Kiran Kumar: Basically, the cameras are the same. The difference is, here, for generating a third dimension, you need two images from different viewing angles. Second, accuracy is needed for retrieving the height information so you need good quality images. Otherwise cartography and very-high-resolution imaging are basically the same.

SK: We used to hear about spy satellites of the US and the Soviet Union that could read the number plate of a car. Do we have that?

KK: Today, we have two feet accuracy. But much of what you mentioned is like the Hubble space telescope looking towards Earth. It will be a 7-8-tonne satellite and have a huge optics system. You will need at least a 2.5-m diameter telescope.

So far we have built a 70-cm telescope and are now working on 1.2 metres.

KK: You can do it in a recurrent orbit, so every day you can come over the same region. Or some kind of revisit – by adjusting the orbit you can make your revisit fixed and steer the camera by pointing and collecting the data.

SK: Today you launched 30 small satellites including two of your own. Do micro- and nano-satellites have practical applications?

KK: Yes. There are companies that are coming up with 200-satellite constellations of 10 kg, 15 kg class that will provide daily coverage of Earth at 3-5-m multi-spectrum resolution. Even if a few satellites go bust, it won’t have a big impact. So they are looking at 60-70 satellites in a single launch. Internet services with 150-kg satellites, etc. Progressively improving your capacity to perform more actions with fewer resources.

SK: Are we continuing to move towards 4-5-tonne satellites?

SK: When can we stop relying on Arianespace for our heavier communication satellite launches?

SK: Can you tell me something about the Indian satnav system, IRNSS?

KK: IRNSS is basically our cost-effective solution for ensuring that India is able to navigate on its own without having to depend on somebody else. Our seven satellites enable us to cover around 1,500 kms from the border. Actually it is much more but 1500 km is the guaranteed range. For example, when we launched our first satellite, somebody in Sweden started receiving [the signals], and then they were coupling it with Galileo and so on. We can cover some portions of the Pacific as well, till Japan.

SK: Again, with these navigation signals, there is the commercial use and there is strategic accuracy for military purposes that will be encrypted and be in a separate band. Is that correct?

KK: In both bands, there will be separate signals for strategic use.

SK: Is our military ready for this?

KK: They are continuously working on it.

SK: What is the Gagan (GPS Aided Geo Augmented Navigation) system and how is it going to improve our aviation?

KK: We have 26 different ground stations for Gagan. The ground receiver receives the signals from all the GPS satellites, plus the signals from Gagan, and then that receiver does the processing, discarding it if there is a satellite that should not be used, applying all those corrections to the data, and then every second it gives a position. All of this goes on in real-time. This is the one that enables the safety of life and integrity. Before Gagan came, in the Indian region there was an aerial hole. Even if an aircraft carried such a receiver, if it came over India, there was nothing to tell its position accurately. Now the Director General of Civil Aviation has certified Gagan.

SK: So even if tomorrow, for some reason, the GPS signal is cut, can Gagan link to this?

KK: We can do that because we are transmitting a signal to Gagan and bringing it down. So whatever we are transmitting in L5, we can do differently. Gagan is only one transponder in the sky. It doesn’t have anything on board. It just receives and retransmits. Rest is done on the ground. Between Airport Authority of India and ISRO, we have an entity which is set up here. Now we have three satellites carrying these payloads. So you are ensuring that at any point of time this service is not affected.

SK: When did you join ISRO? Tell me a bit about your journey in ISRO.

KK: August 1975. I was studying physical engineering, which is an interdisciplinary course conducted out of the physics department at IISc, Bengaluru. And at that time, one of the projects I did was on digital techniques in image processing. We used to take X-ray image scans and convert it into electrical signals, do some signal processing and write it back into the film so that doctors can see it as an enhanced picture. If the quality was not good and the doctors  could not extract the information, then they had to redo the entire process. So instead of re-exposing the patient to another dose of X-rays, our technique could help. Dr Deekshitalu was in the school of automation and, using a discarded lathe, they had come up with a drum scanner.

It started with black and white and later we made a colour scanner as well. And that is how I got into image processing. I joined ISRO in 1975 at the Space Applications Centre, Ahmedabad. I initially started with our satellite for Earth observation, Bhaskara 1, and then Bhaskara 2. I was involved in building the payload. Since then, I have contributed to more than 50 electro-optical imaging systems which were put in orbit. Later, I got involved with communication payloads.

The very first payload on Bhaskara 1 had some problems and the initial turn-on was not successful. So we had to do some simulations on the ground to find out the problem. That gave us a very good exposure to the technology. As a result of that, I have been a part of the review process of many of these things.

SK: So you’ve spent the majority of your professional life in image processing…

KK: Building image systems. And then optical imaging to microwave imaging, where for example we built C-band radars in communication and navigation, etc. This course at IISc – physical engineering – was very interesting. You could join from engineering stream or science stream. So those who came from engineering had to do some core science subjects, and vice versa. Then, within the institute, you could choose whatever field you wanted. So we took courses from operations research to digital switching theory. And then we also had exposure to nuclear physics, vacuum physics, etc. That is what helped me.

Shivanand Kanavi is a theoretical physicist, senior journalist, former VP at TCS and author of Sand to Silicon: The Amazing Story of Digital Technology.