The Cherenkov Telescope Array, which India has invested in, will improve upon the data from Indian instruments like MACE and HAGAR. 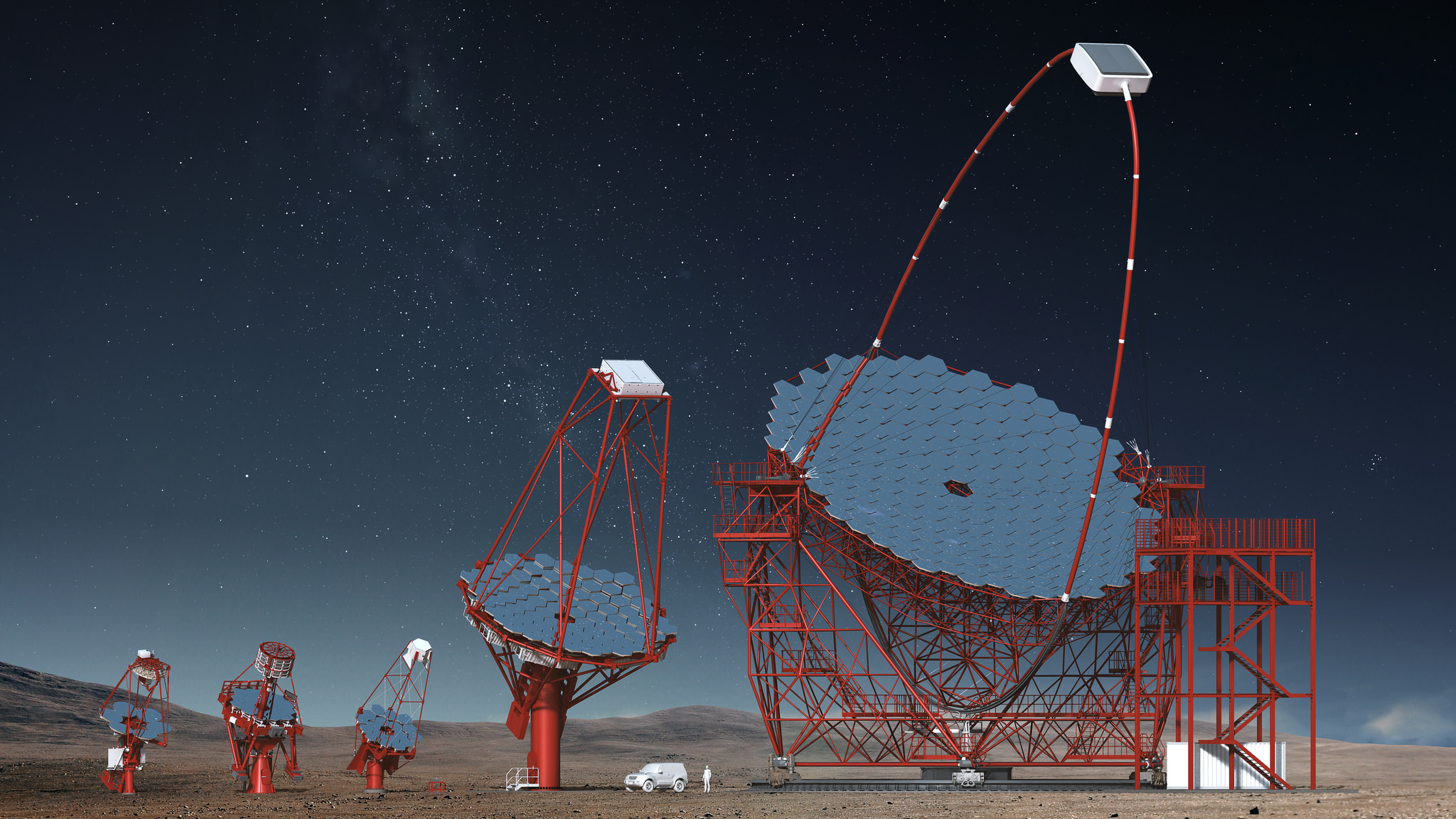 CTA’s survey speed is expected to be a 100-times faster, potentially revealing ten-times as many gamma-ray sources in the universe as are currently known. An illustration of the array. cta_observatory/Flickr, CC BY-NC-ND 2.0

The ‘next generation’ Cherenkov Telescope Array, which will study high-energy cosmic events and analyse a variety of intriguing astronomical phenomena, is slated to come up in two locations: Paranal, Chile, and La Palma, Spain. This update and others were presented by Salvatore Mangano, a researcher with the Spanish government, at an ongoing physics conference in La Thuile, Italy. The CTA’s findings will be useful in a wide swath of physics, including controversial study areas like gamma-ray bursts, dark matter, ancient blackholes and new kinds of particles.

The CTA’s 400-million-euro bill is being footed by 32 countries – including India – and over 200 institutes. Its USP is that it’s an advanced ground-based gamma-ray telescope. Gamma rays are a form of high-energy radiation produced by intense phenomena – such as nuclear explosions. Earth’s atmosphere filters gamma rays coming in from space, preventing them from reaching the surface, where they can harm life. This is why some of the most powerful gamma-ray observatories are onboard satellites in space. But the CTA plans to make up for this by its size and sophistication. In July 2013, its spokesperson Werner Hofmann, of the Max Planck Institute for Nuclear Physics, had said that a satellite comparable to the CTA in performance would have to be the size of a football stadium.

The telescope, or antenna, arrays to be constructed in Chile and Spain will be networked together, allowing all of them to study each gamma-ray source from multiple directions and generate more precise and detailed data. The overall array is being split between the two hemispheres because they will then be able to study radiation sources both within and outside the Milky Way. The total ground surface area covered by the CTA will be 10 sq. km.

This area will be split between three kinds of antennae differentiated by their diameter. There will be four of the 23-metre-wide ‘large’, 25 of the 12-metre-wide ‘medium’ and 70 of the 2.4-metre-wide ‘small’ telescopes. The bigger the antenna, the weaker the radiation the CTA will be able to measure. Why then aren’t all antennae big? Because the low-energy radiation will have to be collected over a smaller ground area, which means larger antennae spread out over a smaller area, whereas high-energy radiation can be picked up by smaller antennae spread out over a larger patch.

While the small and medium prototypes have been built in Sicily, Paris, Krakow and Berlin, the first ‘large’ one is being built in La Palma, according to Mangano. He also said during his presentation that the installation layouts are still being worked out.

A survey conducted in the late-1980s had identified Hanle, in Ladakh, as a suitable site to situate the CTA in the northern hemisphere because its skies were comparable in quality to that over other shortlisted sites around the world. The Indian part of the collaboration had explained at the time that having the CTA would be a “natural extension” of the country’s work on ground-based gamma-ray astronomy, on since 1969.

The CTA collaboration also identifies itself as an extension to ongoing efforts to understand gamma-ray sources better. According to Mangano, the array will “allow very-high-energy gamma-ray astronomy to transit from source discovery to detailed source investigation”. This will be achieved using CTA’s higher angular resolution, field of view and sensitivity. Altogether, the survey speed is expected to be a 100-times faster, potentially revealing ten-times as many gamma-ray sources in the universe as are currently known.

Although Hanle was eventually skipped over by the CTA collaboration – with one scientist speculating it may have been because foreigners can’t access the site easily due to the region’s political sensitivity – the Himalayan Gamma-ray Observatory operationalised the Major Atmospheric Cherenkov Experiment (MACE) telescope there in 2016. So when the CTA does come online, expected to be in 2021, it will extend Indian efforts in gamma-ray astronomy, currently stewarded by MACE and another telescope called HAGAR. Internationally, the CTA will also extend studies being undertaken by the HESS (Namibia), MAGIC (Spain) and VERITAS telescopes (Arizona).

The importance of each of these telescopes can be understood in two ways – and their intersection shines light on why CTA is being considered a “next generation” instrument.

When the high-energy photons called gamma-rays strike Earth’s upper atmosphere, they break down into electron-positron pairs moving at very high speeds. If they move faster through the atmosphere than light does in that medium, then the particles emit characteristic radiation over less than 20 nanoseconds and slow down. Ground-based telescopes collect and analyse this Cherenkov radiation. Because Earth is used as an observing medium, this technique is called imaging air Cherenkov technique (IACT). And because the radiation is first emitted so high above ground, the radiation falls over hundreds of squared metres, requiring IACT telescopes to have large antennae.

But MACE on the downside is a standalone IACT, consisting of a single 21-metre-wide antenna. While there are no advantages to this configuration, a big disadvantage is that the Cherenkov radiation is processed from one vantage point only. In contrast, the alternative stereoscopic method uses two or more telescopes acting together to take and process the Cherenkov radiation snapshot. HESS, VERITAS and MAGIC all have two or more antennae each for stereoscopic detection.

The other way is in terms of the threshold energy – the minimum energy of the radiation that the telescope can pick up on. Among the major ground-based gamma-ray telescopes, MACE is situated at the highest altitude: over 4.2 km above sea level. To compare, MAGIC is at 2.2 km, HESS is at 1.8 km and VERITAS is at 1.2 km (all above sea level). The height brings MACE closer to the place where the particle showers occur and makes it more able to snap lower energy radiation before it’s absorbed by the atmosphere. So this is why MACE has a threshold of about 38 GeV whereas, for example, MAGIC has a threshold of about 80 GeV.

By one estimate, if MACE had used the stereoscopic method, its threshold could’ve been as low as 5 GeV.

The CTA will use the stereoscopic method and have a threshold energy of 20-30 GeV, making it an improvement across the board. The features that will help it achieve these specs will also enable the CTA to probe diverse events, many of which have astronomers stumped.

For example, we know that some cosmic rays, charged particles streaming through space, have energies of the order of a PeV (equal to a million GeV). The Large Hadron Collider (LHC) in Europe barely manages to accelerate particles to 7,000 GeV. Even supernova explosions haven’t been known to accelerate particles to PeVs. So what is? CTA will join the search and help zero in on the answer. HESS has shown already that there could be a PeVatron at the Milky Way’s centre, where astronomers suspect a supermassive blackhole lurks.

And speaking of blackholes – their birth is among the most energetic events in the universe. Their surfaces are prominent sources of gamma radiation and make for natural laboratories in which particle physicists can validate their ideas, which they will be able to using the CTA as a tool. The array will also be able to study the immediate neighbourhoods of other cosmological monsters born when big stars die: magnetars, neutron stars, pulsars, etc. Ultimately, the CTA will be a partner in crime with the LHC as they will both get on the search for new physics.