Forecasting Quakes in the Himalaya With a Peek Into Its Past

Why there is a mega-quake building under the Himalaya, near Uttar Pradesh. 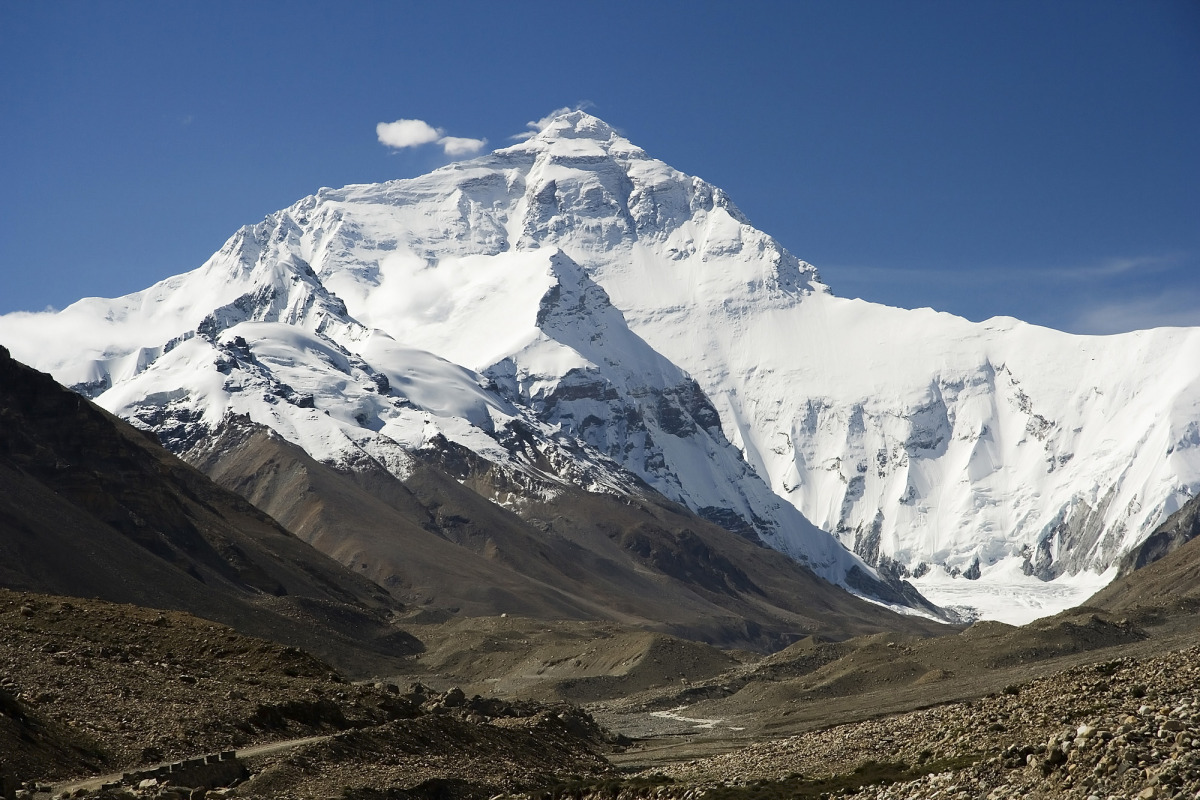 On April 25, 2015, an earthquake measuring 7.8 on the Richter scale struck Nepal near its capital, Kathmandu. The country’s general under-preparedness for quakes together with flimsy public infrastructure resulted in the loss of over 7,000 lives. But the root of the blame lies not just on natural causes but also with the Nepali and Indian governments’ inexplicable blindness toward the possibility of mega-quakes in the region, which geologists from around the world have warned of for over a decade. While India continues to plan hydroelectric projects in the region, Nepal has few quake-proof shelters, not to mention buildings that that can barely withstand one.

The scale of the disaster – with some projecting the eventual loss of life to hover around 10,000 – should serve as a shrill wake-up call. Aside from comparisons to the quake that ripped through Port au Prince in Haiti in 2010, policymakers now have a sordid number to place on the cost of overestimating the Himalayan region’s geologic stability. People in the region will also likely – it is hoped – pay more attention to geologists, for whom this earthquake is both a tragic I-told-you-so moment as well as a call to study further one of the world’s most prominent yet poorly understood seismological hotspots.

The land upon which we live on planet Earth is not one whole piece but made of multiple pieces, each called a plate, floating on the sea of molten rock below the crust. Where two plates meet, the characteristics of the boundary are defined by the relative motions of the plates.

The quake’s origins can be traced to the Indian tectonic plate crashing into the Eurasian plate. Since the late 1980s, geologists have agreed that before the crash, the Indian plate was moving almost twice as fast as the other plates were for about 20 million years, at 140 mm/year, for over 6,000 km. Some 40-50 million years ago, the Indian plate rammed into the Eurasian plate, folding upwards and creating the Himalayas. The aggressive collision continues to this day, with India moving into Asia at 50-60 mm/year. The tensions building up in the rock as a result keep the Himalayan range geologically active, with earthquakes as means to relieve the stresses.

Of particular concern is the central seismic gap (CSG), which runs northeast of Delhi along a region woven with unstable faults and is home to over 10 million people. Until April 25, observers had been concerned by the paucity of earthquakes in the gap: the longer there were no quakes, the more the pent up stresses, and the stronger any future quake would be. In February 2015, Priyanka Pulla had reported in Science that the earthquake that occurred in the CSG in 1505 could’ve been weaker than thought, further intensifying the chances of a “mega-quake” in the future. That earthquake had occurred in southwest Tibet, and has been much-studied for its implications for the amount of stress pent up under the Himalayas. The feared mega-quake, or a version of it, finally came to be near Kathmandu. It likely won’t be the last.

The key to predicting future quakes, their occurrence patterns and locations will be to understand the structure and behaviour of the earth below the Himalayas and – farther back in time – reconstructing a seismological history of the subterranean volume of rock.

A paper from March 12, 2015, from a team of researchers from India and Australia in the journal Lithosphere, attempts to answer the former question, describing the “spatial distribution of the rock uplift” in the western 400 km portion of the CSG. The researchers write:

Although the vulnerability of this region to large earthquakes has been identified for quite some time, the active structures that could potentially host a large seismic event remain poorly understood across much of the central seismic gap, particularly within the western half of the gap that spans the state of Uttarakhand, India.

The team’s conclusion is that there is an active thrust fault below Uttarakhand pregnant with enough tension to unleash a quake measuring at least 8 on the Richter scale. This, in a state already prone to crippling landslides and floods, and with 70% of its population (of about 10 million) residing in rural areas. They attribute the tremendous tension to a geometry of rock that has partially separated from a layer beneath and caused folds and deformations. The technical term for this geometry is a décollement:

… the landscape and erosion rate patterns suggest that the décollement beneath the state of Uttarakhand provides a sufficiently large and coherent fault segment capable of hosting a great earthquake.

The answer to the second question – of how the Indian plate rammed into the Eurasian plate harder than usual – is what a team of researchers from MIT and the University of South California have taken a shot at in the May 4 issue of Nature Geoscience. The team uses numerical simulations to describe a scenario in which the Indian plate could’ve been actively pulled into the Eurasian plate as if its motion was lubricated by smoother mantle flow, over which our planet’s tectonic plates slide.

According to their tests, there could’ve been three plates – call them A, B and C – colliding near the Eurasian plate such that A was slipping under B and B was slipping under C. This double subduction zone formed a pipe-like volume beneath the subducted parts of A and B through which the flow of mantle was squeezed (see image). Evidently, the mantle flow would have been slower if A and B had been long (~10,000 km long) and closer together. However, numerical simulations run by the team showed that if A and B had been shorter (~3,000 km long) and farther apart, the mantle flow through the pipe-like volume would’ve been fast enough to cause a drop in pressure underneath and pull the incoming Indian plate. And, according to Oliver Jagoutz, from MIT’s Department of Earth Atmospheric and Planetary Sciences, and his team, this is what could’ve happened – between the Indian plate (A), the Kshiroda plate (B) and the Eurasian plate (C).

If these results are corroborated by other studies, the double-subduction mechanism will be a new way to understand how colliding plates could interact, and if they could move faster or slower over time depending on their physical dimensions. As Magali Billen, a geophysicist at the University of California, Davis, writes of the paper in a Nature News & Views piece:

There are other known mechanisms that can lead to rapid changes in plate motion. For example, an upwelling plume head can accelerate mantle flow and an increase in slab density during initial subduction of a plate through the mantle transition zone can accelerate slab descent. However, these mechanisms lead to short-lived, one-to two-million-year pulses of accelerated plate motion. In contrast, the mechanism of double subduction can generate sustained, 20-million-year-long intervals of rapid plate motion, similar to that recorded for the Indian Plate during the late Cretaceous [145-66 Myr ago].

In the study of hurricanes, the Saffir-Simpson scale provides a way to measure the relative magnitude of each storm. However, the scale has been calibrated on the basis of storms that have already occurred, and it’s not beyond nature to unleash a storm in the future that breaks the scale. Similarly, there haven’t been enough earthquakes logged in record books to know how many make a pattern, how much is too strong, or if there are time-bound ways to accurately predict earthquakes. Without these patterns, geologists may accrue a vast body of knowledge yet still not come into a position to predict the time of the next earthquake and its probable magnitude in term for precautionary measures.

As the noted geophysicist Roger Bilham wrote in the Annals of Geophysics (PDF) in 2004,

Perhaps the most disappointing observation is that despite a written tradition extending beyond 1500 B.C. we know very little about Indian earthquakes earlier than 500 years before the present, and records are close to complete only for earthquakes in the most recent 200 years. This presents a problem for estimating recurrence intervals between significant earthquakes, the holy grail of historic earthquake studies. Certainly no repetition of an earthquake has ever been recognized in the written record of India and the Himalaya, although great earthquakes in the Himalaya should do so at least once and possibly as much as three times each millennium.

Studies like the two discussed, among a larger body of thousands like them, together help allay this significant uncertainty. The Geoscience paper about double-subduction provides the sort of insights into plate tectonics that seismologists could use to describe the long-term behaviours of landmasses and their impact on natural resources in the region. On the other hand, the Lithosphere paper about the presence of active faults under areas like Uttarakhand allows scientists as well as politicos to explore ways to combating disasters in the shorter-term. Ultimately, the goal will be to achieve a prefect union of long-term and short-term knowledge to forecast and survive future earthquakes better.