First Demo that Some Future Particle Accelerators May Be 100x Smaller

American physicists have validated the idea that two tabletop accelerators, which cost thousands of times lesser than their more conventional counterparts, can be strung up end-to-end for better performance. 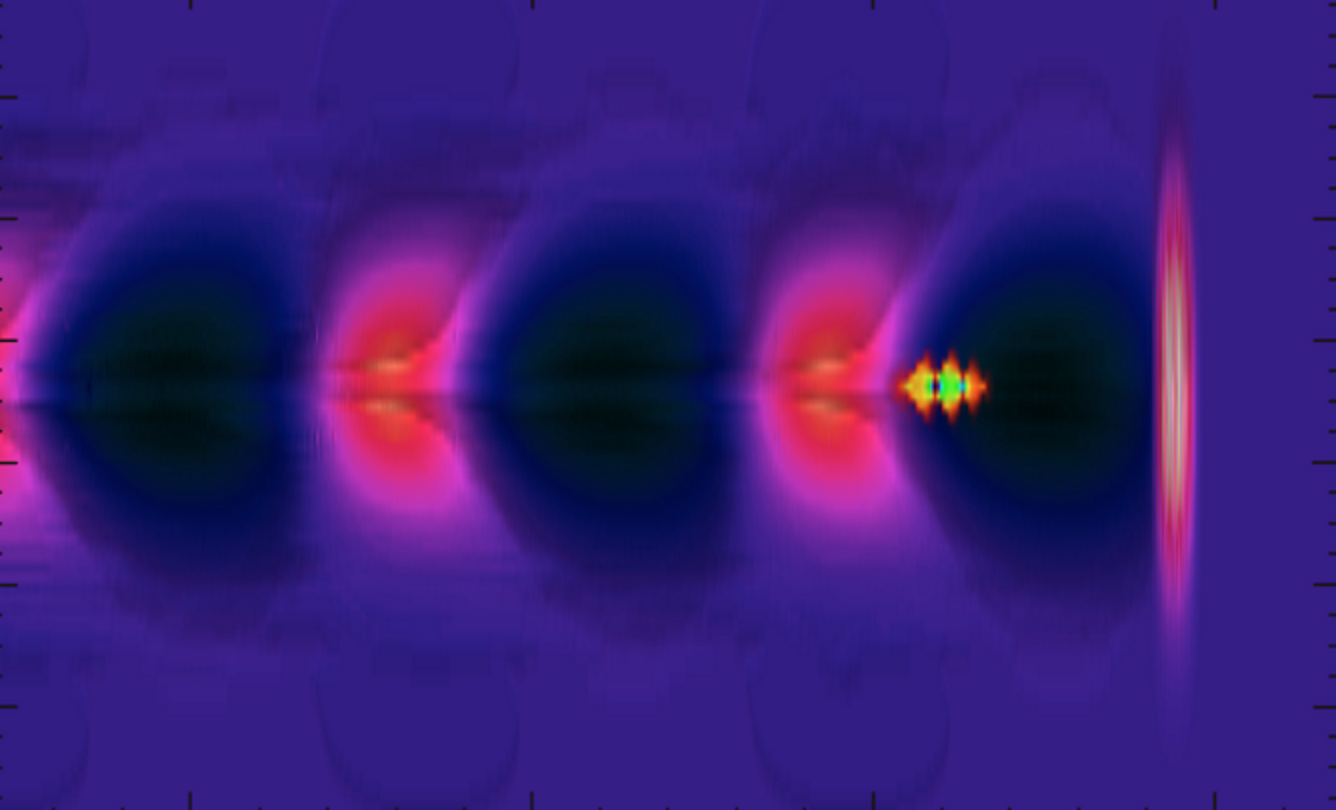 Quite unlike the mammoth Large Hadron Collider (LHC) particle-accelerator in Europe, physicists have managed to devise a shoebox-sized version in the last few years. These tabletop accelerators take pride in being able to impel charged particles over a few centimetres to energies that would take a larger machine a few hundred metres – summed up as the accelerating gradient. For example, a number like 100 GeV/m is not unheard of as against a conventional linear accelerator’s gradient of 0.7-0.8 GeV/m. However, before they can enter into wider use, tabletop accelerators have a problem of their own to get out of the way first – and the first logical step of which may have just been achieved.

Tabletops can sustain their accelerating abilities only over very short distances, such as a few millimetres, limiting their ability to really challenge the larger machines’ energies. So scientists from the Lawrence Berkeley National Laboratory (LBNL), California, did the next best thing: they joined up two such accelerators end to end. The first one accelerates a bunch of electrons and then sends them into the second one, which accelerates them further. Despite the simple design, the trick is to ensure that the energy gains are sustained and the efficiency remains high. The experiment’s significance is that it’s the first demonstration of two tabletop accelerators working together. Such an arrangement avoids the shortcomings of a single-stage accelerator as well as validates the idea that multiple ones can be strung together to push electrons to high energies.

Each unit’s working principle, leaving aside the fact that it’s innovative, alludes to how all particle accelerators work in general: by transferring electromagnetic energy to charged particles. A large accelerator uses electric and/or magnetic fields in a vacuum, the medium through which the particles are accelerated. In a tabletop accelerator, the medium is plasma, a hot and dense soup of electrons and the heavier positively-charged ions.

In a laser plasma accelerator (LPA), a high-power laser is shot into the plasma, pushing the electrons away in a travelling wave. A well-timed injection of a bunch of electrons can then tag along behind the wave, receiving energy through the wave’s wakefield. Because the plasma can hold much stronger electric fields than the vacuum inside larger accelerators, tabletop accelerators are more energy-efficient as well.

In November 2015, scientists from the University of Maryland showed that if the plasma density was raised up to a limit, even weak laser pulses (containing a few millijoules of energy) could accelerate the particles by about 0.1 GeV in a single LPA. However, the LBNL group realised that a higher plasma density also made for a lower jump in energies over longer distances – the distances required to accelerate particles to a few thousand GeV like the LHC can. In a paper published in the journal Nature on February 11, the LBNL scientists wrote: “… in order to reach an energy of 1 TeV in a single stage, a plasma density of about 1015 cm−3 is required. This would result in an acceleration length of 1 km, a low acceleration gradient, 10 kJ of required laser pulse energy, and an electron bunch that is not suitable for collider applications.”

Off the table #FTW

To subvert this roadblock (of higher plasma densities making for lower energy gains over longer distances within a single LPA), the LBNL group decided to link up multiple LPAs end to end. Each stage would have a high plasma density and be energised by petawatt lasers (firing at 1 million megajoules a second), and the whole setup would measure a “few hundred metres” in length.

This will bring the tabletop accelerator off the table – but that’s not such a bad thing. LPAs are being envisaged to serve two distinct goals: as particle accelerators used for high-energy physics research and as machines to generate energised particles for use in medical diagnostics. And the tabletop designation is relevant only for the latter goal. Particle accelerators used in diagnostics are typically the size of a room and generate electron beams of the order of MeV. Single-stage LPAs a few centimetres long already achieve this, notwithstanding a few hiccups.

For multi-stage LPAs that want to compete with, say, the planned 30-50-km long International Linear Collider (ILC) that will accelerate electrons to 1,000 MeV, a “few hundred metres” is still a win. Such savings in real estate – and so in money – could democratise mainstream experimental physics research, and be an especial boon for resource-restrained developing countries.

Anyway, the LBNL experiment was successful and threw up some results that could be key to resolving its inherent shortcomings. The apparatus (shown below) runs like this: A laser pulse is fired into a jet of gas, which becomes ionised and produces the first electron beam. Then, the beam travels through a discharge capillary that contains more ionised gas (another plasma) that focuses the beam using its magnetic field. Third, the focused beam graduates into a second discharge capillary. There, another laser pulse is fired to accelerate the electrons further. And finally, the particles slam into a detector for measurement. The entire train of components is about 10 cm long.

The maximum energy gain in the second stage was found to be 0.1 GeV. But on the downside, only 3.5% of the electrons that entered the second stage were accelerated. This is a problem that Wim Leemans, director of the Accelerator Technology and Applied Physics Division at LBNL, and his colleague Eric Esarey had outlined in an essay in 2009: “The main challenge for controlling the trapping of plasma background electrons arises because the phase velocity of the plasma wave is close to the speed of light. Therefore the slow background electrons are not easily trapped. Unless the wave is a giant, one must either speed up the electrons or slow down the wave.” Although methods were soon devised for speeding up the electrons or slowing down the wave, research into giant plasmas is also underway.

And this the LBNL group, of which Leemans and Esarey are part, also concedes: that the results of their experiment can be improved by better focusing the electrons emerging out of the first stage, using better timed laser pulses, and producing a larger plasma wave in the second stage. The paper concludes, “The demonstration of such collider-relevant stages – including synchronising the timing of separate laser drivers – will be the focus of our future work.”

Leemans and Esarey had predicted in the same essay that, should the technology pan out the way they thought it would, then a future configuration of LPAs could give the ILC a run for its money. The wrote, “One could envision a much shorter and cheaper LPA-based TeV electron–positron collider coupling many acceleration stages together … A TeV linac would require about 100 such stages. Each stage would consist of a preformed plasma channel, no longer than a meter, with a plasma electron density of about 1017 cm–3. Each accelerating module would be powered by a 30-J, 100 [femtosecond] laser pulse that would drive a mildly nonlinear plasma wave in its wake.”

And in an article accompanying the paper, Brigitte Cros, of the Laboratory of Physics of Gases and Plasmas at the Université Paris-Sud, Orsay, might have referred to that train of LPAs: “Although there is a long way to go before a laser-plasma accelerator with 100 stages can be built for collider applications, intermediate-energy accelerators in the 10-GeV range are a realistic possibility in the near future, as test facilities for accelerator physics and other applications.”