If physicists do find that gravitational waves have travelled through dimensions other than the four we live in, it will be the start of a revolution in physics. But how close are we really? 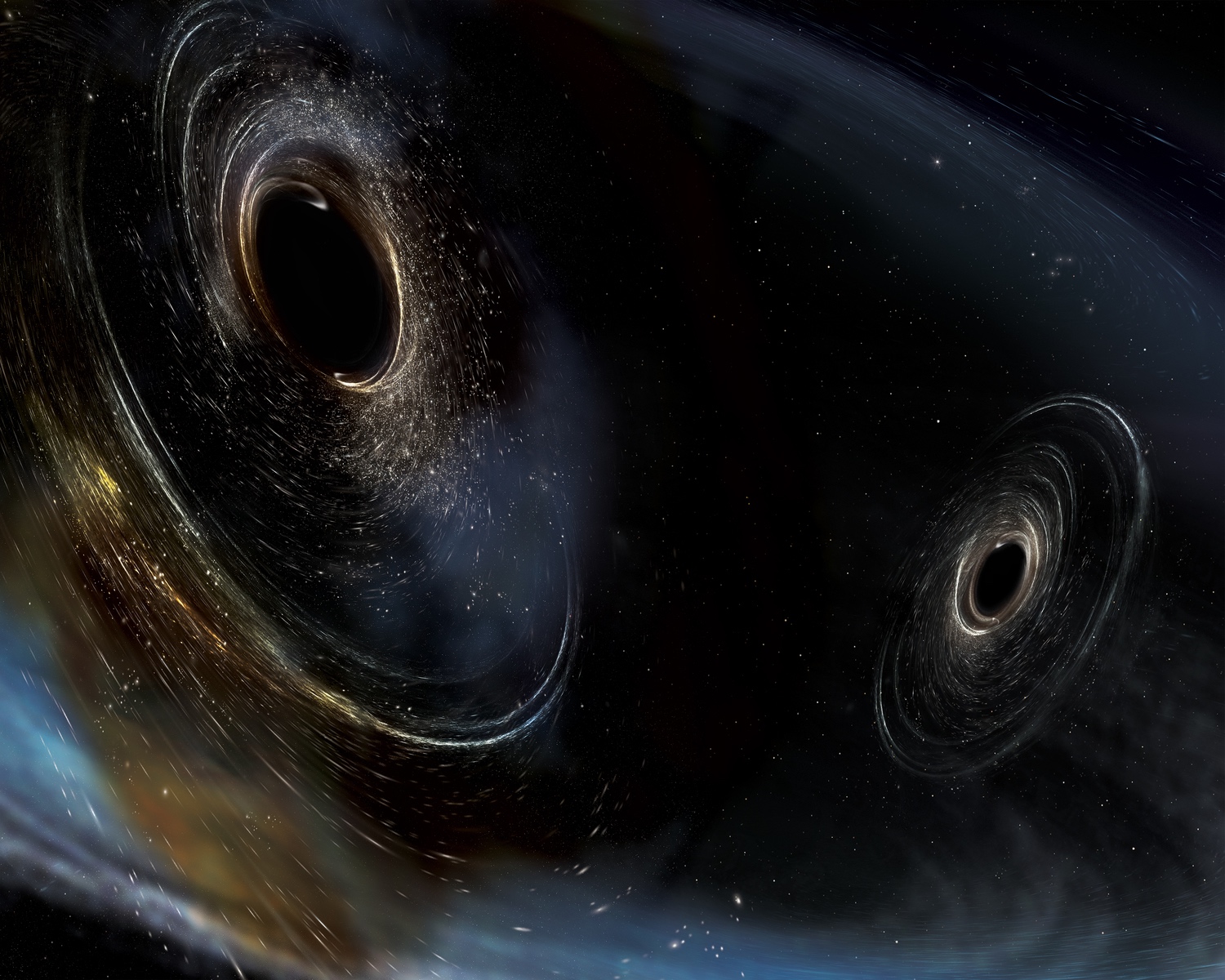 Researchers have already speculated about links between gravitational waves and extra dimensions in the past, but they have been more concerned with how a higher-dimensional blackhole could emit such waves. Credit: LIGO/Caltech/MIT/Sonoma State (Aurore Simonnet)

Spoiler alert (but really, you should’ve watched it by now): In the climax of Christopher Nolan’s Interstellar (2014), Matthew McConaughey dives into a blackhole and discovers that it’s really the entrance to a higher dimension, through which he can access a distant area of space as well as the past. Some filmgoers found the experience to be absurd – but in real life there is no way to tell. We haven’t found any dimensions other than the four in which we live: one of time and three of space. And even should we find anything, we don’t know how we might experience them, if at all we can.

But last month, two theoretical physicists suggested there could be a place to look where we might find something. David Andriot and Gustavo Lucena Gómez, both junior scientists at the Max Planck Institute for Gravitational Physics, Potsdam, said that scientists could use a super-sensitive instrument used to detect gravitational waves to uncover elusive signs of extra dimensions in those waves. While scientists are still debating if this could be a legitimate suggestion, considering it has been spelled out only on paper, some are beginning to speculate if this could have something to do with theories of quantum gravity.

The Laser Interferometer Gravitational-wave Observatories (LIGOs) are two identical detectors located in Washington and Louisiana, US. Each LIGO uses a pair of high-precision lasers to detect distortions in the spacetime fabric of the universe called gravitational waves. These waves are emitted when any body with mass accelerates through space. But unless the body is extremely dense, the waves are too feeble to detect. For example, the LIGO detectors are optimised to pick up on gravitational waves emitted by blackholes of a certain size that collide in cataclysmic events in space. So far, it has found three sets of waves. Together, for example, they have revealed that blackholes that weigh between 50 and 10,000 solar masses occur more often in the universe than thought.

Researchers have already speculated about links between gravitational waves and extra dimensions in the past, but they have been more concerned with how a higher-dimensional blackhole could emit such waves. Moreover, Gómez was tired of his usual work and “wanted a break”, so he and Andriot decided to take a different perspective. “We forgot about how these gravitational waves may or may not be emitted and focused on how an already emitted wave would just travel through spacetime – if extra dimensions were to exist,” he told The Wire. “And, well, I daresay the result was surprising to us at first.”

Imagine a tabletop on which a circle has been drawn. The theory of general relativity predicts that, as a gravitational wave passes through, the shape will start to wiggle, stretching back and forth between being a circle, a horizontal ellipse, a circle, a vertical ellipse, and on and on. The two elliptical distortions are said to correspond to two modes of the wave, both predicted by Albert Einstein’s theory of general relativity. However, some theories of physics take a step further and predict the existence of a third mode: where the circle also increases and decreases in size. Perhaps because of its resemblance to an air-breathing sphincter, this is called the ‘breathing’ mode.

Andriot’s and Gómez’s calculations suggest that if a gravitational wave has ‘leaked’ into an extra dimension, one sign of that ‘leak’ could be the presence of a ‘breathing’ mode in the LIGO data. “Finding that sign, which is not predicted by general relativity, would be, to my taste, the first direct experimental confirmation that there is something beyond general relativity,” Gómez said. “It would be a revolution. Not so much in the sense that we already all know there must something beyond general relativity but it would still be quite a blast.”

At the same time, it wouldn’t be a direct sign of an extra dimension either. “This is not the only mechanism to produce a breathing mode. Certain alternative theories of gravity also predict the existence of [such] modes, and the exact behaviour of these two would be different,” K.G. Arun, who works on gravitational-wave physics and astrophysics at the Chennai Mathematical Institute, told The Wire. “But I think studies like this are taking the right steps towards precisely quantifying the signatures of extra dimensions on gravitational waveforms.”

General relativity has vastly improved our understanding of how gravity works, and enabled a horde of applications and new technologies in the last century. However, its success also imposed a limitation. It explained gravity, one of the four fundamental forces of nature, while the other three are understood only using quantum mechanics. This left open a variety of unsolved problems. For example, a magnet can hold up a postcard on the refrigerator door because the electromagnetic force is incredibly stronger than the force of gravity. Why? We don’t know.

Physicists have not been able to unify both general relativity and quantum mechanics in a common mathematical framework, at least not in a way that can be checked in an experiment. But they have had more success in theory. Many (competing) ideas have emerged that offer different ways to achieve a theory of ‘quantum gravity’. Among the earliest was Kaluza-Klein theory, which suggested that gravity was so much weaker because most of its potential was ‘leaking’ into a fifth dimension that was hidden from us.

If a Kaluza-Klein dimension exists, then it would also imply the existence of elementary particles heavier than the ones we’re aware of. However, the Large Hadron Collider, the world’s largest and costliest science experiment, has so far failed to find any signs of these particles.

In fact, physicists have also been looking for other ways in which general relativity could ‘fail’. Within LIGO data itself, Arun explained, analysts have an eye out for whether the phases of the waves defy Einstein’s predictions; if they travel at slower than the speed of light; if they disperse; or whether, overall, anything ‘non-Einsteinian’ happens at all. So far, nothing.

Wouldn’t any of this have ruled out Andriot’s and Gómez’s ideas? No. Instead, they suggest that we might be looking for anomalies using the wrong tools. Apart from a ‘breathing’ mode, the duo’s calculations also make another prediction. When a gravitational wave emerges from a higher dimension, they say that it will do so with a characteristic frequency – the same way air enters a flute at one end and emerges through different holes creating different notes. So depending on how small the higher dimensions are, the waves will emerge at very high frequencies – far beyond what LIGO is capable of detecting.

“They will basically be undetectable in the near – or medium-term? – future,” Gómez said. Arun agrees: “This would simply mean that at the energy scales accessible to [LIGO and the LHC], there are no hints of extra dimensions. But many of the theories which predict extra dimensions suggest that they may be present at extremely high energies, which may not be accessible by these experiments.”

According to Andriot, finding these high-frequency waves along with the ‘breathing’ mode would signal that they were almost surely on to higher dimensions. But even then, we wouldn’t yet be on to a theory of quantum gravity, more like have a foot in the hopefully-right door. What we would know for sure is that, as Arun said, “IF such a signature is found, it would mean that general relativity has broken down at those scales, which will have far-reaching consequences. However, as Carl Sagan would say, extraordinary claims require extraordinary evidence. Who knows what is in store…”

The paper in which Andriot and Gómez described their ideas was published in the Journal of Cosmology and Astroparticle Physics on June 23.