We are getting a glimpse of the power of a network of gravitational wave detectors. India's own detector will join it in 2024. 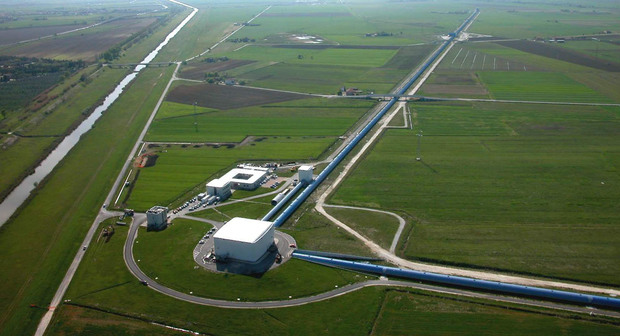 We’ve found a fourth pair of blackholes colliding, using gravitational wave detectors. This is almost pithy. We know we can do this. We know that humans as a species are this cool now. We have tech that can sense ripples of gravitational energy flowing through space and time. These waves are unleashed when very massive bodies accelerate through space. For example, two blackholes orbiting each other come closer, orbiting faster – just before the moment of collision, they’re moving at very nearly the speed of light. And although we may not have the tech to detect all gravitational waves, we have a proof of concept. We know our tech works.

What’s cooler about the new detection is that now we have the ability to pinpoint the sources of these waves better. Earlier, we only had the Laser Interferometer Gravitational-wave Observatory (LIGO), which consists of two detectors located in Washington and Louisiana, US. They were joined earlier this year by VIRGO, a detector in Italy. With three of them, humans can triangulate the sources of gravitational waves better.

“It is the first time that gravitational waves are being detected by an instrument other than LIGO. And we are already getting a glimpse of the power of a network of gravitational wave detectors,” Parameswaran Ajith, a member of the LIGO collaboration and a physicist at the International Centre for Theoretical Physics, Bengaluru, told The Wire.

Here’s a case in point. The image below shows the patches of sky where the last three gravitational waves that were detected could’ve come from (in purple, blue and pale green). They go half way across the sky, a stupendously large swath that means it’s nearly impossible to zero in on the precise source. But on the bottom left corner in the image, in brighter green, the patch of sky where the latest set of waves could’ve come from. That’s the difference having a third detector makes.

GW170814 – as the detection is being called – means LIGO/VIRGO ‘received’ the waves on August 14, 2017. The waves were produced by two blackholes weighing 31 and 25 times as much as our Sun colliding some 1.8 billion lightyears away, and the merged blackhole weighed 53 solar masses. That’s three solar masses’ worth of energy radiated away as gravitational waves.

If not for LIGO/VIRGO, we couldn’t have known these blackholes existed. For a long time, astronomers thought blackholes belonged to two classes: lighter than 20 solar masses and heavier than millions of solar masses. So thanks to these detectors, Ajith said, “We are also getting more and more certain about the existence of a population of massive black holes, which we didn’t imagine previously.” 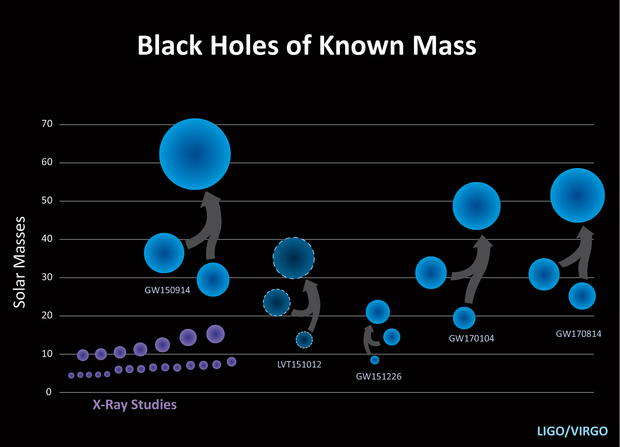 Colliding blackholes don’t emit a lot of other radiation unless there’s an unfortunate star nearby. But in the future, LIGO/VIRGO can be used to spot the collision of, say, two neutron stars, a process thought to emit X-rays and radio-waves. Because the patch of sky is small enough, telescopes can sweep it for signs of such radiation – and if they find something, there’s a better chance they’d have found the source.

When India’s LIGO detector comes online in eight years, it will work together with the American LIGO and VIRGO as a large network to shrink the patch by a factor of 10. Ajith explained that the brighter green patch is about 60 squared degrees in area and India’s LIGO can help bring it to about 6 squared degrees. This won’t be just because of the detector’s sensitivity – Ajith: “India’s LIGO will be of comparable sensitivity to the US LIGO and VIRGO when it’s ready” – but also because of the distance between the detectors. The more the distance between two detectors in a network, the higher their collective resolution will be.

Tarun Souradeep, a senior professor at the Inter-University Centre for Astronomy and Astrophysics, Pune, said that IndiGO, the Indian part of the LIGO collaboration of which he’s a member, is currently acquiring land for the project. However, he refused to say where: “Once the acquisition is complete, we will announce the details in a ceremony.” He also expects the detector to be built by 2022 and operationalised after a year of tuning and checks in 2024.

What VIRGO also brings to the table is a way for scientists to study the polarisation of the waves. This is a description of how the waves are oriented in space, and it’s difficult to obtain with LIGO alone because both its detectors are oriented similar to each other. But VIRGO is aligned differently, “and this gives us access to additional polarisations of the waves,” Ajith said. This is important because studying gravitational waves is one way to prove that Albert Einstein’s theories of gravity are correct, that they’re an exact description of nature. According to Ajith, “VIRGO has enabled the first verification that the polarisations of gravitational waves are consistent” with Einstein’s predictions.

Apart from significantly improving source location, the detection is proof that VIRGO works – just the way we realised LIGO works when it announced its first discovery in early 2016. (And with that realisation, Kip Thorne and Rainer Weiss, two of the many scientists who helped design LIGO, are hot favourites to win the Nobel Prize for physics next week.)

VIRGO working is important news because it’s one more detector system than our only other option, LIGO. This means if LIGO picks up on a signal it’s not sure is a gravitational wave, VIRGO can help ascertain it. LIGO and VIRGO will also help corroborate positive signals for each other and make scientists’ discoveries more robust. (They signed a deal to this effect ten years ago.)

In June this year, a minor controversy erupted when a group of physicists from the Netherlands cast doubt on LIGO’s first discovery, announced in February 2016. The Danish group found that though the gravitational wave signals were correlated at both of LIGO’s Washington and Louisiana sites – as they should be – the noise patterns in the data were also similar. The question, then, was (as a member of the group told Forbes), “If the correlation properties of signal and the noise are similar, how is one to know precisely what is signal and what is noise?”

The first direct detection of gravitational waves has been rightly hailed as the biggest physics discovery of the decade (beating the Higgs boson to the top) and, as mentioned before, Thorne and Weiss are in line for a Nobel Prize. So the Danish group’s question put the burden on the LIGO collaboration to establish conclusively that the group was wrong.

At the time, LIGO’s reply had been to point out either that the Danes had made a mistake or that the quality of their data analysis didn’t match up to the ones LIGO employed. But with VIRGO in the picture, and the first two-observatory discovery of gravitational waves having been confirmed, physicists likely have the final word on the signal-noise problem. In other words, we’ve definitely detected gravitational waves. Our tech works.