How Do Birds Survive at High Altitudes?

The bar-headed goose's adaptations work well for occasionally spending short periods of time at high altitudes, but these may have high energy costs. 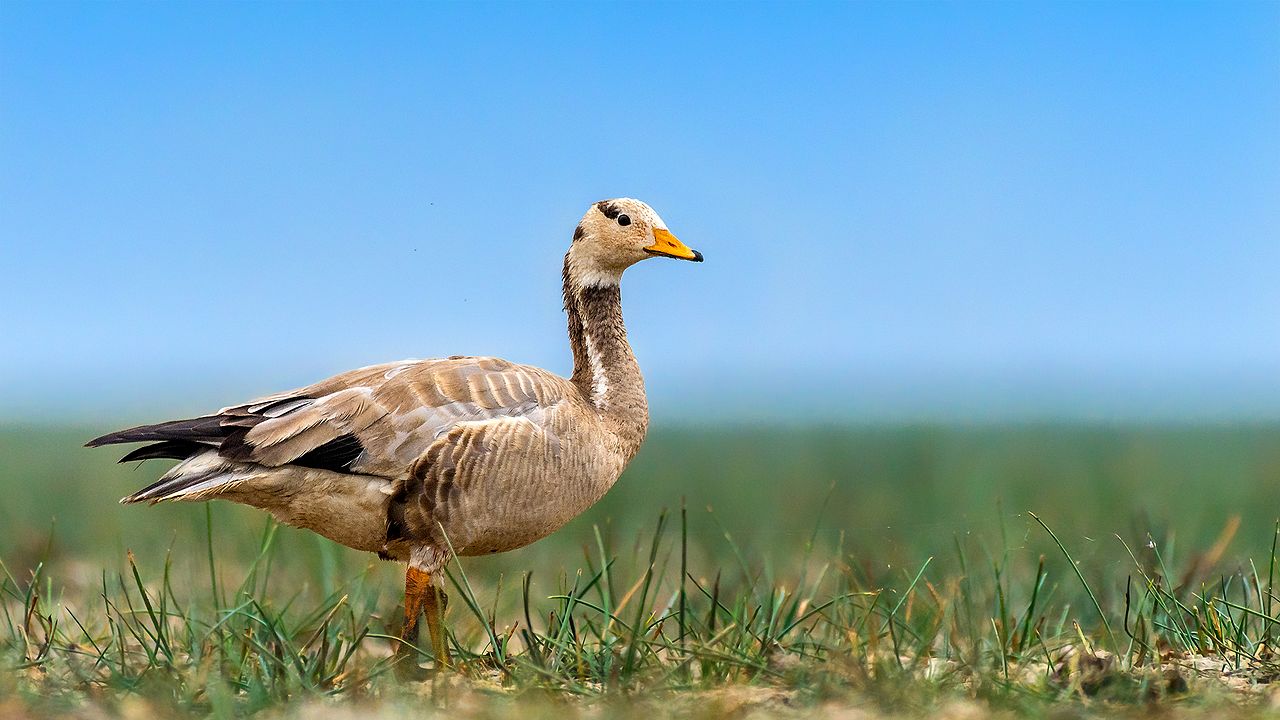 Bar-headed geese fly at elevations that would defeat most other birds. They raise goslings in Mongolia and Tibet and, come autumn, they soar high over the Himalayas into the Indian subcontinent. Although they take this – the steepest migratory flight of any bird – in stages, they cross the lofty mountain range at night in one marathon flight lasting seven hours. It’s easier to keep going once you are at that height than to land and take-off again and again. If humans did something similar, go from low to high elevations without a break, they’d suffer from altitude sickness and might even die.

Although it may seem effortless, flying sucks ten- to twenty-times more oxygen than resting. Flying birds gulp air, deriving oxygen to fuel their hard-working muscles. But this critical element is in short supply at high elevations, with only one-third to half the oxygen levels at sea level. Such a low oxygen condition is called hypoxia.

How then do the geese sustain their passage at 5,000 to 6,000 metres? Scientists even recorded one bar-headed goose flying at 7,290 m. Since flapping their wings saps energy, the birds glide once they reach cruising altitude. But they cannot coast indefinitely. Gravity pulls them down and they have to beat their wings to regain elevation.

In addition, the birds have to battle freezing nighttime temperatures while flying high above the mountains. Perhaps the cool air contains more oxygen and regulates body warmth better than the heat of the afternoon.

With all this exercise, the birds may get dehydrated. Despite their plump build, bar-headed geese are extreme athletes – flying large distances without adequate oxygen or water in the cold. At least the birds start their autumnal flights at an elevation of 2,000-4,000 m. On their return journey, they soar from sea level, an even more challenging effort.

To overcome the mortal danger of flying through thin air, the geese have a suite of special features compared to other waterbirds – large lungs, a dense network of blood vessels in the wing muscles, haemoglobin in their blood that adheres to oxygen. They can hyperventilate at seven times the normal resting rate without passing out and possess more mitochondria, the energy production centres within cells. (A more detailed listing of their physiological adaptations is here.) All these features allow them to extract the most mileage from every breath of oxygen.

Unlike these Asian bar-headed geese (Anser indicus), Andean geese (Chloephaga melanoptera) and crested ducks (Lophonetta specularioides) live out their lives in the high mountains of South America. Are birds that transit through high elevations for a few hours built differently from resident ones?

People living in the Andes and the Tibetan plateau cope with the challenges of living with thin air in different ways. Tibetans have normal haemoglobin but they ventilate rapidly, inflating their larger lungs with more air with every breath. Their blood has twice as much nitric oxide that dilates red blood cells, perhaps enhancing circulation and moving oxygen.

Instead of inhaling more air to gain more oxygen, Andeans have higher levels of haemoglobin that are richer in oxygen. Unlike Tibetans, they possess normal levels of nitric oxide, but their ratio of red blood cells to total blood volume, called haematocrit, is high. Having high density of red blood cells turns blood viscous, slowing its flow. This results in not enough oxygen reaching tissues, causing them to suffer from chronic mountain sickness. Despite living at high elevations for thousands of years, some changes work against Andeans.

Andean geese, like the humans with whom they share the mountains, have more haemoglobin that attaches to oxygen. But researchers don’t know much more about either the geese or ducks of the Andes.

Ten researchers from five countries led by doctoral student Sabine Lague of the University of British Columbia, Canada, compared how these species obtained more oxygen when it was in low supply.

Instead of working with captive birds at low elevation laboratories, the team chose to catch wild birds and test them under high altitude conditions. In China, they caught seven bar-headed geese, and in Peru, they caught seven Andean geese and six crested ducks. They fit the birds into a flexible cradle and reduced the amount of oxygen available to them by increasing nitrogen into the air they breathed. Thus, they simulated conditions at 4,500, 7,000, 8,500, and 11,000 metres elevation and monitored the birds, measuring oxygen consumption, heart-rate, and blood pressure among other parameters.

Despite decreasing oxygen levels, the birds maintained an almost constant consumption of oxygen. How did they do it? Bar-headed geese panted to get more oxygen into their lungs. But hyperventilating for long stretches causes carbon dioxide levels in blood to fall, turning their blood alkaline. This doesn’t affect birds as much as mammals. In fact, it seems to improve the lungs’ absorption of oxygen.

However, the South American birds didn’t hyperventilate. Instead, they were more effective at extracting oxygen from the air they breathed.

“They can extract up to 90% of the oxygen from air and this ability goes up as the air becomes more hypoxic,” Barve told The Wire. “This adaptation is significant and makes perfect ecological sense since these species live at high elevations all year round and hence have to develop mechanisms to cope with hypoxia without exercising.” Barve, who studied the effects of hypoxia on Himalayan birds, wasn’t involved in this study.

“Their [the authors] main conclusion is that Asian and Andean species have found divergent ways to get around the same problem of living in hypoxic conditions,” says Barve. “Such divergent adaptations are not uncommon in nature but are still pretty awesome. Additionally, the migratory and sedentary lifestyles of these birds reflect how these strategies might have shaped their adaptation to hypoxia through natural selection on different traits.”

The authors note the similarities between the responses of birds and their human counterparts. Although bar-headed geese are visitors to high elevations, they breathe hard like resident Tibetans. Like Andeans, the South American birds don’t pant. But they differ in one crucial aspect: the birds’ blood isn’t thick with red blood cells and hence seem better adapted for life at the top of the world.

The study was published in the Journal of Experimental Biology on November 15, 2017.