A Giant Quake May Be Lurking Under Bangladesh and Beyond

Bangladesh and parts of North-Eastern India and Myanmar sit on the intersection of three tectonic plates, where mounting stress could lead to a massive earthquake and put 140 million lives at risk. 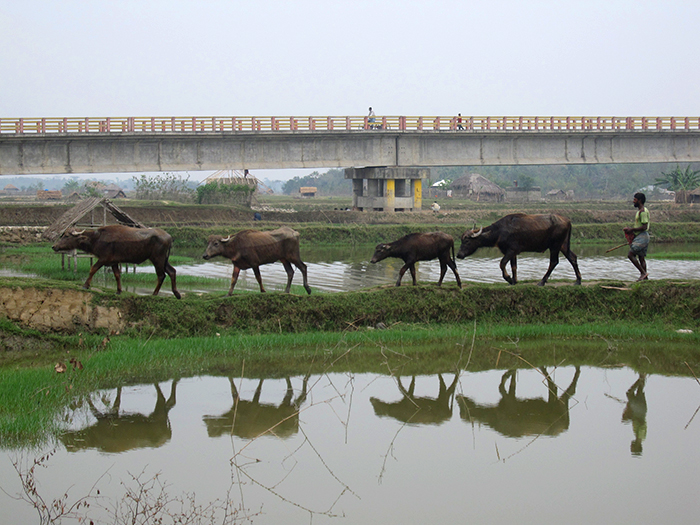 The region under threat is built on the world’s largest river delta, and water is everywhere. Widespread poverty, soft sediments and rapidly multiplying infrastructure including bridges like this one near the southern city of Khulna make the region exquisitely vulnerable to earthquakes. Credit: Kevin Krajick/Lamont-Doherty Earth Observatory

A huge earthquake may be building beneath Bangladesh, the most densely populated nation on earth. Scientists say they have new evidence of increasing strain there, where two tectonic plates underlie the world’s largest river delta. They estimate that at least 140 million people in the region could be affected if the boundary ruptures; the destruction could come not only from the direct results of shaking, but changes in the courses of great rivers, and in the level of land already perilously close to sea level.

The newly identified threat is a subduction zone, where one section of earth’s crust, or tectonic plate, is slowly thrusting under another. All of Earth’s biggest known earthquakes occur along such zones; these include the Indian Ocean quake and tsunami that killed some 230,000 people in 2004, and the 2011 Tohoku quake and tsunami off Japan, which swept away more than 20,000 and caused the Fukushima nuclear disaster. The findings appear in this week’s issue of the journal Nature Geoscience.

Subduction-zone quakes generally occur where plates of heavy ocean crust slowly dive offshore beneath the lighter rocks of adjoining continents, or under other parts of the seafloor. Sometimes sections get stuck against each other over years or centuries, and then finally slip, moving the earth. Scientists knew of the plate boundary in and around Bangladesh, but many assumed it to be sliding only horizontally near the surface, where it sometimes causes fairly large, but less damaging earthquakes in areas that are not as densely populated. However, the authors of the new research say movements on the surface over the past decade show that subduction is taking place below, and that part of the plate juncture is locked and loading up with stress. They are not forecasting an imminent great earthquake, but say it is an “underappreciated hazard.” Bangladesh, Myanmar and eastern India (all near top) are bisected by an extension of the tectonic boundary that ruptured under the Indian Ocean in 2004, killing some 230,000 people. Known quakes along the boundary’s southern end are shown in different colours; the black sections nearer the top have not ruptured in historic times, but new research suggests they could. Credit: Michael Steckler/Lamont-Doherty Earth Observatory

“Some of us have long suspected this hazard, but we didn’t have the data and a model,” said lead author Michael Steckler, a geophysicist at Columbia University’s Lamont-Doherty Earth Observatory. “Now we have the data and a model, and we can estimate the size.” He said strain between the plates has been building for at least 400 years–the span of reliable historical records, which lack reports of any mega-quake. When an inevitable release comes, the shaking is likely to be larger than 8.2, and could reach a magnitude of 9, similar to the largest known modern quakes, said Steckler. “We don’t know how long it will take to build up steam, because we don’t know how long it was since the last one,” he said. We can’t say it’s imminent or another 500 years. But we can definitely see it building.”

The newly identified zone is an extension of the same tectonic boundary that caused the 2004 Indian Ocean undersea quake, some 1,300 miles south. As the boundary reaches southeast Asia, the complexity of the motions along it multiply, and scientists do not completely understand all of them. But basically, they say, a giant plate comprising India and much of the Indian Ocean has been thrusting northeasterly into Asia for tens of millions of years. This collision has caused the Himalayas to rise to the north, bringing events like the 2015 Nepal quake that killed 8,000 people. Bangladesh, India’s neighbour, lies on the far eastern edge of this plate, but pressure from the collision seems to be warping Asia clockwise around the top of Bangladesh, ending up largely in the next country over, Myanmar. This wraparound arrangement has resulted in a crazy quilt of faults and quakes in and around Bangladesh. Among the largest, a 1762 subduction-zone quake near the southern coast killed at least 700 people. This January, a magnitude 6.7 event in adjoining eastern India killed more than 20. There have been dozens of large quakes in between, but the assumption was that no actual subduction was taking place under Bangladesh itself, seeming to insulate the region from a truly gigantic one. The new study undercuts this idea.

Starting in 2003, U.S. and Bangladeshi researchers set up about two dozen ground-positioning (GPS) instruments linked to satellites, capable of tracking tiny ground motions. Ten years of data now show that eastern Bangladesh and a bit of eastern India are pushing diagonally into western Myanmar at a rapid clip – 46 millimeters per year, or about 1.8 inches. Combined with existing GPS data from India and Myanmar, the measurements show that much of the resulting strain has been taken up by several known, slowly moving surface faults in Myanmar and India. But the rest of the movement – about 17 millimeters, or two-thirds of an inch per year – is shortening the distance from Myanmar to Bangladesh.

This has been going on for a long time, and the results are clearly visible: neatly parallel north-south ranges of mountains draping the landscape, like a carpet being shoved against a wall. The researchers interpret the shortening pattern to mean that subduction is taking place below, and that a huge zone – about 250 kilometers by 250 kilometers, more than 24,000 square miles – is locked and building pressure, just a few miles below the surface. The zone includes Bangladesh’s densely packed capital of Dhaka, a megalopolis of more than 15 million.

Steckler says that, assuming fairly steady motion over the last 400 years, enough strain has built for the zone to jump horizontally by about 5.5 meters, or 18 feet, if the stress is released all at once. If strain has been building longer, it could be up to 30 meters, or almost 100 feet. The land would also move vertically, to a lesser extent. This is the worst-case scenario; in the best case, only part would slip, and the quake would be smaller and farther from Dhaka, said Steckler.

In any case, Bangladesh and eastern India sit atop a landscape vulnerable even to moderate earthquakes: the vast delta of the Ganges and Brahmaputra rivers. This is basically a pile of mud as deep as 12 miles, washed from the Himalayas to the coast, covering the subduction zone. In a quake, this low-lying substrate would magnify the shaking like gelatin, and liquefy in many places, sucking in buildings, roads and people, said study coauthor Syed Humayun Akhter, a geologist at Dhaka University. The great rivers—10 miles across in places–could jump their banks and switch course, drowning everything in the way; there is in fact evidence that such switches have happened in previous centuries. Potential quake zone. Solid red line indicates an area of about 24,000 square miles that could move during a subduction-zone earthquake, affecting 140 million people or more. The dashed line represents a scenario in which the slip might take place along a separate fault. Credit: Chris Small/Lamont-Doherty Earth Observatory

Akhter says that fast-growing, poor Bangladesh is unprepared; no building codes existed before 1993, and even now, shoddy new construction flouts regulations. Past quake damages and deaths are no indicator of what could happen now, he said; population and infrastructure have grown so fast that even fairly moderate events like those of past centuries could be mega-disasters. “Bangladesh is overpopulated everywhere,” he said. “All the natural gas fields, heavy industries and electric power plants are located close to potential earthquakes, and they are likely to be destroyed. In Dhaka, the catastrophic picture will be beyond our imagination, and could even lead to abandonment of the city.”

Roger Bilham, a geophysicist at the University of Colorado who has studied the region but was not involved in the new paper, said its “data are unassailable, the interpretation is sound.” Bilham said the research “ties an enormous amount of structural interaction together. We have seen in recent history only modest seismicity responding to those interactions. The Indian subcontinent is effectively being pushed into a tight corner.”

Susan Hough, a U.S. Geological Survey seismologist who also studies the region and was not involved in the study, said that in recent years, “we’ve been surprised by big earthquakes that have not been witnessed during historical times, or witnessed so long ago, they were forgotten. Studies like this are critical for identifying those zones.”

Scientists in Bangladesh and neighbouring countries continue to assess the hazards. James Ni, a seismologist at New Mexico State University, said he and colleagues hope to deploy 70 seismometers across Myanmar in 2017, to get a better image of the apparently subducting slab. “We don’t have a good idea of its geometry, we don’t know how far it goes down,” said Ni. He said that if the study authors are right, and the slab is building strain, a quake would probably turn urban areas in eastern India “into ruins,” and effects likely would extend into Myanmar and beyond. “We need more data,” he said.

The other authors of the study are Dhiman Ranjan Mondal of the City University of New York; Leonardo Seeber, Jonathan Gale and Michael Howe of Lamont-Doherty Earth Observatory; and Lujia Feng and Emma Hill of Singapore’s Nanyang Technological University. The research was supported by the U.S. National Science Foundation.