Why We, as Hindu Americans, Are Opposed to Modi's Undeclared Emergency

The war of attrition against the people of Kashmir and against minorities elsewhere poses a far greater danger to Indian democracy than Indira Gandhi’s Emergency rule of 1975. 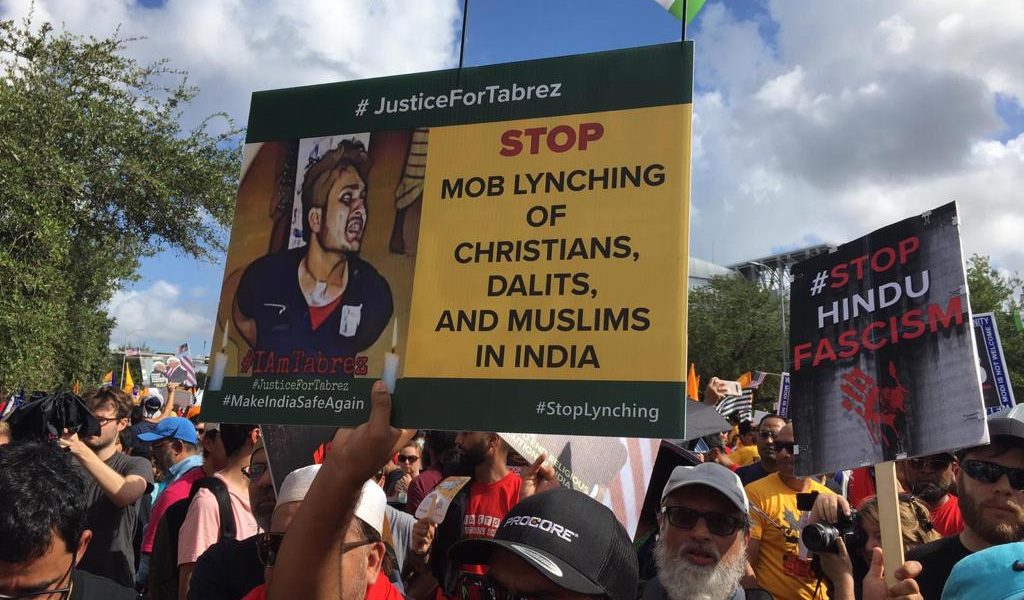 Photo: Alliance for Justice and Accountability

Imagine for a moment that the US had a parliamentary system like in India, which permits the Feds to dismiss a state government, say in California, citing political instability and imminent threats to law and order. Say, thereafter, the state is ruled directly by a Washington bureaucrat, with all the powers of the state legislature purportedly vested in him/her.

Then imagine that in the stealth of night the Feds declare that henceforth the state of California shall be divided into three entities, which may or may not get full statehood, and that the approval of that plan by the Washington bureaucrat shall be deemed to be the consent of California’s elected lawmakers – most of whom are by then under house arrest and held incommunicado, with a complete shutdown of phones and internet across the state.

Yet, that is precisely what India did to the state of Jammu and Kashmir on August 5. Sadly, the other endangered democracy here in the US barely took notice, as President Trump meekly endorsed India’s actions a few days later.

When Prime Minister Modi appeared at the UN General Assembly in New York yesterday, it had been more than 50 days of total isolation of Kashmir from the rest of India and the world. There seems to be no end in sight to the collective punishment of its entire people.

From paradise to purgatory

Official narratives of the situation in the Valley have been largely self-serving and often proven false. But heart-wrenching first-hand stories have emerged through the haze, and they paint a worsening humanitarian crisis, especially for women, children and the elderly, with shortages of medicines and other daily necessities.

There have been numerous reports of pellet gun injuries and even of deaths and torture. All avenues for citizens to express their views, including the right to assembly and worship, appear to have been blocked. And, the near-total travel ban has placed the Supreme Court of India in the embarrassing position of having to ‘grant permission’ to a few hardy souls to visit Kashmir to attend to family emergencies.

In the meantime, India’s primary preoccupation in the last few weeks has been to ‘manage’ Western reactions, as diplomats gloat over the fact that the Kashmir issue has been successfully contained in international forums. So, as the people of Kashmir continue to suffocate, we should not be surprised if the honourable prime minister weaves an uplifting story of how Kashmiris will soon be out on the streets with roses for their ‘liberators,’ and the Valley will soon be brimming with jobs and industries – and will be transformed into a tourist paradise such as the world has never seen.

Such vainglory among Indian officials may sound cruel and even deliberate, considering that seven million citizens continue to be locked down, but they would be entirely normal in the populist world of Modi, just as President Trump wears his mistreatment of immigrant mothers and children as a badge of honour in front of his adoring crowds.

Also read: Lawsuit Against Modi in US Court Over Kashmir Decision Unlikely to Go Far

Perhaps the Indian government hoped for a ground-swell of support from ordinary Kashmiris for its scrapping of Article 370, but initial attempts at opening public spaces appear to have backfired. While jingoistic supporters of the government continue to back its adventure vociferously, nearly eight weeks later, the state is now caught between a rock and a hard place: If it eases the restrictions on travel, worship and social media, Kashmir could very well explode. But if it prolongs the inhumanity, it will only compound the rage day after day, and Kashmir could reach a point of no return.

So, Delhi may very well resort to what repressive governments tend to do under pressure: Make a pretence of easing restrictions, while crushing dissent even further, not only in the Valley but also in the rest of India.

This crisis is different from 1975

Indira Gandhi’s Emergency rule lasted 21 harrowing months, and was brought down by a combination of outrage in the international community and fierce resistance by a few civil society leaders, some of whom fought from exile in the US (including the RSS, which ironically is the prime mover of today’s march towards an authoritarian Hindu state).

More importantly, the judiciary played a major role in defending India’s constitution every step of the way. But, at the end of the day, the Emergency ended not the least because of Indira Gandhi’s own arrogant certainty that she would win handsomely in a new national election – in which both she and her son, who had launched the notorious forced sterilisation drive, lost.

Today’s undeclared emergency by a populist government is vastly different. It has just been re-elected with a brute majority in the parliament and is inspired by a disciplined ideology united by hatred for the other. It has already done the hard work of co-opting many of the important national democratic institutions, and it has been very good at ‘winking’ at numerous acts of violence against minorities and activists.

At first blush, it even seems to have the support of the Supreme Court for its actions in Kashmir as well as for its National Register of Citizens (NRC), which is unfairly targeting Muslims. This is a troubling combination, which should be of great concern to anyone who cares for India’s democracy.

First-generation Hindu Americans like us consider ourselves very fortunate to have imbibed the notion of ahimsa (non-violence) from a very early age, even as we listened to the idea of Rama Rajya (a just and egalitarian society) at the feet of our parents and grandparents. But it is the US that taught us the critical importance of free speech and dissent in a democratic society.

So, it is doubly painful for us to behold how far the two nations that we dearly love are drifting away from their shared ideals. In India, spaces for dissent are shrinking at an alarming pace, with those who disagree with state policy often branded as desh drohis (betrayers). Some prominent thinkers have even been assassinated.

The media is constantly facing threats from defamation cases to archaic sedition laws, leading dangerously towards increasing self-censorship. And most regrettably, Hindu seers and acharyas, who are supposed to be the moral compass of the majority religion, are largely missing in action, as violence against minorities goes on unabated and the state is determined to look the other way.

As Americans of Indian origin who idealise the idea of democracy, we are sounding the alarm bells loud and clear: It is high time that Hindus of conscience all across the world wake up to the reality that their faith has been hijacked by those who have completely rejected its inclusive and egalitarian heart. This is an emergency.

Raju Rajagopal and Sunita Viswanath are co-founders of Hindus for Human Rights USA, an advocacy organisation that is committed to the ideals of multi-religious pluralism in the US, India, and beyond.