Obedience to authority, perceived power and hard paternalism have combined to create a situation where policemen lose their moral compass and are wiling to use force against helpless, defenceless citizens. 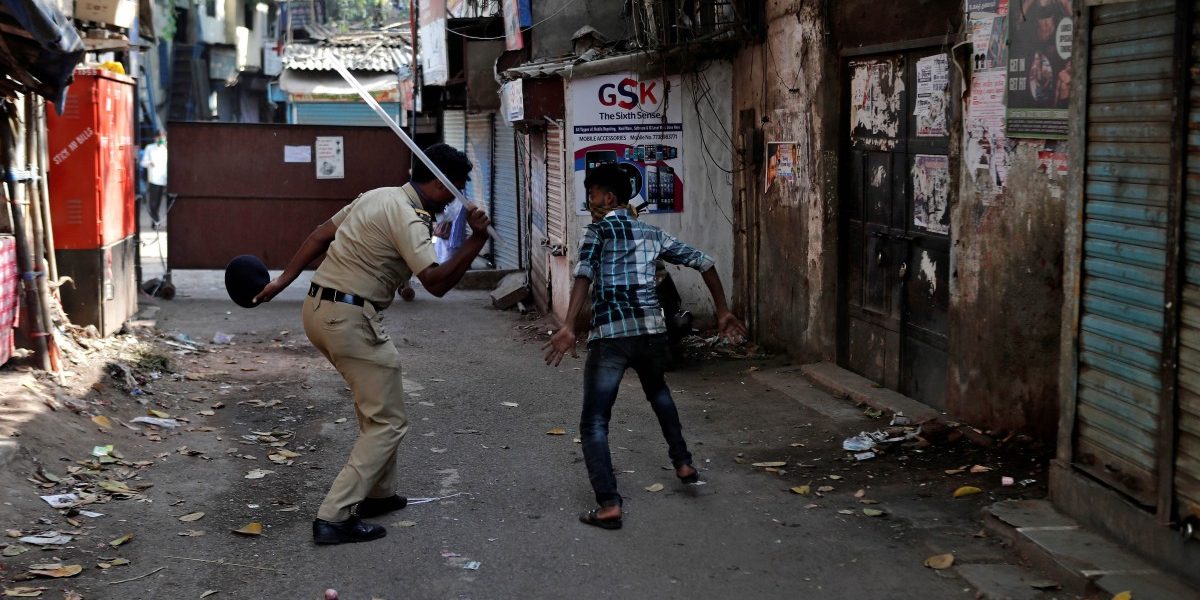 A policeman wields his baton towards a man for breaking the curfew, during a nationwide lockdown in India to slow the spread of COVID-19, in Dharavi, one of Asia's largest slums, during the coronavirus disease outbreak, in Mumbai, India, April 11, 2020. Photo: Reuters/Francis Mascarenhas

The lockdown is now heading to its third extension. While the coronavirus epidemic rages, several videos from different parts of the country are doing the rounds on social media showing how the police have been using muscle power on citizens. In one, a police officer is seen throwing away the holy water of a senior citizen and making him frog march, in one, a group of police officers use lathis to hammer citizens brutally and another group thrashes youngsters who are crying for mercy.

I ask myself, is this something policemen feel duty bound to do? Or has the extended lockdown introduced a sense of pleasure generated from perceived power which the force may have started feeling. What are the long-term effects of this?

Paternalism is the policy or practice on the part of people in authority of restricting the freedom and responsibilities of those subordinate to or otherwise dependent on them, in their supposed interest.

Paternalism can be classified as hard or soft. “Soft paternalism” is paternalism that does not violate autonomy. Hard paternalism largely means restricting a person’s liberty for her own good under conditions which violate her autonomy. Liberal theorists reject the latter as a moral wrong.

This deserves to be understood with an example. X has been poisoned and will die shortly unless she ingests an antidote in the state’s possession. Unfortunately, she doesn’t know that she has been poisoned and refuses to believe the state authorities when told so. Instead, she suspects, arguably with good reason, that the state may subject her body with unwarranted medication or that she may be made a subject of a medical test. The state’s alternatives are only two: do nothing and let her die, or force feed her the antidote “for her own good.” The test is the ‘hypothetical consent test’. Soft paternalism will be where the state comes to the conclusion that she would have consented if she was thinking clearly and rationally, and then administers the antidote to her forcibly. Hard paternalism would be to coerce her to self-administer, or deceptively inject it into her system without obtaining/assuming consent.

The lockdown administered upon us all is paternalistic in nature. The power granted to the police to stop citizens from coming out of their homes is soft paternalism as the state assumes our consent that knowing the entire factual matrix, we will consent to it. Hard paternalism on the other hand is using muscle power on citizens, deploying the army, imposing penalties, registering FIRs etc. The state proceeds on this without and in some cases against our consent.

We have been taught, trained and at times even forced to accept and respect the commands of authority which in turn has never expected or wanted us to question its actions. To fulfill this, it devised “obedience” in order to impose a sense of indulgence and interaction with itself. This obedience is the psychological mechanism that also links individual action to political purpose.

One of the most famous studies of this ‘obedience’ in psychology was carried out by Stanley Milgram, a psychologist at Yale University. He conducted an experiment in 1961 focusing on the conflict between obedience to authority and personal conscience. In the aftermath of World War II and the Nuremberg war crime trials, Milgram examined justifications for acts of genocide offered by those accused of the crime. A regular defence and a common explanation the accused offered was based on ‘obedience’ – that they were just following orders from their superiors.

The experiments began in July 1961, a year after the trial of Adolf Eichmann in Jerusalem, one of the major executors of the Holocaust. The local and international media closely followed Eichmann’s trial, pushing psychologists to study various ways obedience can coerce humans to commit serious crimes. Milgram devised the experiment to answer the question: Could it really be that Eichmann and his million accomplices in the Holocaust were just following orders? Could we call them all accomplices?

The participants in the most famous variation of the Milgram experiment were 40 men recruited using newspaper advertisements. Milgram developed an intimidating shock generator, with shock levels starting at 30 volts and increasing in 15-volt increments all the way up to 450 volts. The many switches were labelled with terms including “slight shock,” “moderate shock” and “danger: severe shock.” The final two switches were labelled simply with an ominous “XXX.” Each participant took the role of a “teacher” who would then deliver a shock to the “student” whenever an incorrect answer was given. While the participant believed that he was delivering real shocks to the student, the “student” was faking and simply pretending to be shocked, without of course the knowledge of the “teacher”.

The results showed alarming levels of moral conscience overthrown by authority. Around 65% of the participants reached the highest levels of giving a shock to their student which was fatal. The findings of Milgram’s experiment illuminate the enjoyment of sadistic pleasure drawn out of any act when performed with a false and ingrained sense of power and obedience to authority. An inference is drawn which suggests that for many people obedience may be a deeply ingrained behavioural tendency, indeed, a pre-potent impulse overriding training in ethics, sympathy, and moral conduct.

This raises a pertinent question as to the genuineness and righteousness of the commands given by the authority. The acts committed under this false assumption of power and virtual authority by any group/individual could lead to violence, abuse and even persecution of the weaker, if not protected by the real authority, i.e. the state and its functionaries.

Milgram’s experiment, which eventually became very infamous for recording an ugly (but true) side of human behaviour, shows how individuals may be subtly made obedient and, under a sense of power, can lose their moral compass and be nudged into participating in acts of violence against fellow citizens.

Writing on the Adolf Eichmann trial, Hannah Arendt coined the phrase, ‘the banality of evil’. The enabler of such evil is the moral imperative to obey. For the Holocaust to have been averted, the majority of German citizens needed to disobey. But they did not. The current police crackdown and its acceptability by general society at large may not seem to be this big right now. But this has a crude chilling effect. It settles in the subconscious mind that this is normal. Eager loyalty to state forces prevents people from expressing dissent against it. This has frightening consequences for civil liberties and human rights, as muscle power gains an advantage over humble democratic practices.

I hope like many other forgettable things which are happening around, we will forget this as well and move on with our lives.

Namit Saxena is a lawyer