Weddings in the Time of Kashmir Lockdown

In the Valley, many weddings have either been cancelled, postponed or are simply being conducted as stripped down, bare versions of what would have been if normalcy prevailed.

The scene at a marriage hall in Rajbagh. Photo: Quratulain Rehbar

From July to September, Kashmir witnesses the peaks of two seasons: tourism and weddings.

But with the situation on the ground as tense as it is ever since Articles 370 and 35A were read down, and the communication clampdown in the now Union Territory, weddings appear to have lost their charm – many have either been cancelled, postponed or are simply being conducted as stripped down, bare versions of what would have been if normalcy prevailed.

Each day, families have been cancelling invitations to various events and trying to get the word out any which way they can. This year, an exceptionally large number if marriages were planned as people thought the situation on the ground had cooled.

So, how are weddings being conducted in the face of an unprecedented communication ban?

On August 4, while the state of Jammu and Kashmir was on high alert as speculation was rife about the central government’s plans, a large number of people were queuing up at ATMs and petrol pumps, buying essential goods and medicines to prepare for whatever would be unleashed.

At the same time, a family from Dargah Hazratbal were knee deep in decorations and preparations for the wedding of their daughter – Mufeeda Jan – which was meant to take place on August 4 and 5.

On August 4, the stage was set and decorated with yellow flowers for the mehendi ceremony and Jan was excited to take photographs in her yellow and green embroidered lehenga. The venue was Nigeen Club, a marriage hall on the bank of famed and picturesque Nigeen Lake in the outskirts of Srinagar.

Every corner of the hall was buzzing with excitement while Jan’s hands were decorated with mehendi early in the day, while women chattered in the hall and sang Kashmiri folk songs.

The family did not pay heed to rumours of a communication ban with the hope of nothing ruining the wedding. Across the Valley, phones kept pinging about the internet being snapped, but no one thought mobile networks and landlines would also become a casualty.

Also read: Ground Report: Agony and Casualties in the Valley in the Immediate Aftermath of Shutdown

Only close relatives had landed for the August 4 event, the rest were invited to the main reception on August 5.

But when 7 am came the next day with the communication blackout in place, the attention of everyone already present had shifted with many confused about what to do.

Section 144 had already been imposed in Srinagar and loudspeakers echoed messages that the wedding party never expected to hear – “Everyone is ordered to sit in their homes as the city has been put under curfew. Anyone trying to avoid the law and order situation will be dealt with strictly.”

With no idea as to how the groom would reach his own wedding, the Jan family was in the dark. The gloom turned to tears and the halls that reverberated with joyous music and dancing the previous day remained silent.

All day, the family waited at the marriage hall, but no one was able to step out and ascertain the situation as security forces had already been heavily deployed. No one without a curfew pass was able to travel.

While the day wore on, attendees worried about making the journey to their homes.

At around 2 pm, a white car entered the premises. The groom, dressed in casual clothes, along with his mother, had braved the curfew and made it to the venue. He and his mother had gone to the police station first to request a curfew pass, and they were allowed to travel on the condition that only one person would be allowed to accompany the groom.

“Everyone in the hall started crying as no one had expected him to arrive at such a moment. It took them just 20 minutes to have tea and finish it as soon as possible,” Jan’s relative, Bilal Ahmad, said.

The wedding was perhaps the first of its kind in Kashmir where only the mother of the groom was in attendance from his side of the family.

“At the last moment, it was difficult to cancel it so they took take the risk,” Ahmad said.

Finally, the two were married and Jan was taken to her new home in Peerbagh, draped in a shawl and without having had the chance to wear her bridal finery. 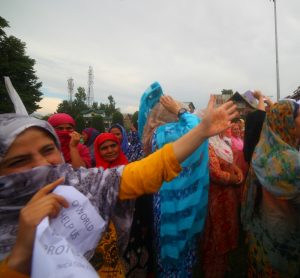 A young woman, whose wedding is to be held in October, protests in Soura in Srinagar with ‘Save Article 370’ written on her hand in henna. Photo: Quratulain Rehbar

A different family and a similar scene played out at a marriage hall in Rajbagh a couple of weeks after the disaster of the Jan wedding where Bilkisa Khan*, the 48-year-old mother of Hidayat Khan*, sat wearing a yellow salwar kameez along with a dozen other women.

With a sullen glare, Khan’s gaze remained fixed on the main entry of the tent. Instead of fresh flowers, two men decorated the hall with artificial versions.

“We were not able to get fresh flowers from the market as everything is shut, so we had to manage with these artificial flowers,” said Khan.

Khan has been waiting since the early hours of the morning to receive her relatives from Sopore and Anantnag.

“Most of our relatives live in downtown area but in these conditions how will they come? We are not even being able to confirm to everyone that the wedding is happening today,” she said.

Still in disbelief, Khan’s family had paid in advance for two tents at the big marriage hall, believing and hoping that those invited would be able to attend the wedding once the situation eased up over the two weeks since the revocation of Article 370.

But with Kashmir still in lockdown mode, the Khans’ dream of having a big family wedding had slowly chipped away. 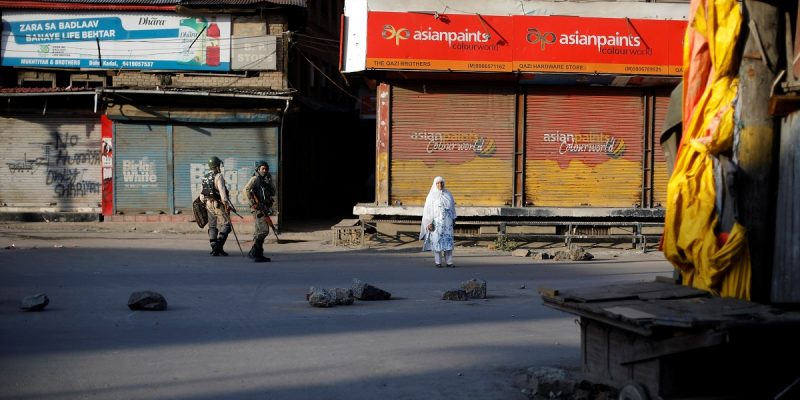 Security personnel patrol past a Kashmiri woman on a deserted street in Srinagar, on August 20, 2019. Photo: Reuters/Adnan Abidi

Khan’s daughter, Bisma*, who studies in Mumbai, spoke about how difficult it became for her to reach the wedding.

“My parents were not able to transfer money for tickets because of the communication blackout. When I finally managed to buy tickets, I had to wait for hours at Srinagar airport for someone to take me home. I was very worried. This has been hell,” she said.

Organising the wedding became a nightmare on its own. Khan said she first had to send one person to the electrician’s home in Rawalpora. When that person didn’t come back after more than two hours, she sent her younger son as well.

“Now we have to first locate the relative whom I had sent to the electrician’s place. If the phones were working, we could have easily called the electrician,” she said, choking out a laugh at the absurdity of it all.

Even for a basic part of any traditional Kashmiri wedding in the Valley – the wazwan – the family had to run ragged to locate the house of the wazas (Kashmiri cooks). After locating the wazas, the family tried to arrange for other items required, including water tanks, etc.

“We cancelled the walima (main function), which was going to be held on Monday because only 12 people had arrived from the hundreds invited,” Khan said.

Getting stocked up for the wedding has also been an uphill battle. “Where we thought we could buy items at a wholesale rate, at present, the rates for everything have doubled as the market is more or less shut,” Hidayat Khan, the groom, said.

For the bride, one issue was the lack of makeup artists. In Kashmir, non-locals are mostly preferred as makeup artists, but most non-locals have fled the Valley. “We have now asked for a local girl to come do the mehendi and make up,” Hidayat said.

The family has also been unable to contact the family of the bride to see how preparations were going at their end.

Suhail Bhat, a wedding photographer from Srinagar had to cancel several shoots since August 5. “Over the past two weeks, we might have lost Rs 2 lakh worth of business,” he said.

Bhat blames the communication blackout for the spate of cancellations. “We used to get queries through our social media portals, but since internet and mobile networks are shut we don’t exactly know whether the wedding is going to take place or has been put on hold,” he said.

Since August 5, Bhat and his co-workers missed four wedding shoots which were to take place on August 7-8, 17-18, 19-20 and 25-26. “We usually get the address of the family only at the time of the marriage. But we have no idea how to reach out the families now,” he said.

Even make-up artists and brides have been using local newspapers to communicate. “But you cannot always trust that as you cannot share your personal details with everyone,” said Tamanna, a makeup artist who is a non-local.

“A girl’s dream is to have a memorable wedding, one that she would cherish for the rest of her life. But in Kashmir today, such dreams are only being dashed,” she said.

Quratulain Rehbar is a Kashmir-based journalist working with the Kashmir Walla magazine.