Vira Sathidar's Life Was a Lesson in Political Commitment and Solidarity

Nothing perturbed Vira Sathidar, not even the constant harassment by the NIA or the local Nagpur police. On October 21 last year, when I finally could access one of the countless rounds of supplementary chargesheets in the Elgar Parishad case, I had immediately called Vira Sathidar. His name was among the list of many “Urban Naxals” named in the chargesheet filed by the National Investigation Agency (NIA). It was not surprising, but concerning, nevertheless. No “crime” was attributed to Vira Sathidar, but he was named several times. “Asta tey tasa (It is usually like that in these cases),” he told me in his signature Nagpuri drawl. Nothing perturbed Vira Sathidar, not even the constant harrowing by the NIA or the local Nagpur police. He was used to police raids and their persistent harassments.

“I am a man who has led marches from Khairlanji to Bhima Koregaon, these empty baseless insinuations and intimidations don’t bother me,” he told me. At the end of the two-hour-long interview, we had unanimously decided to hold the interview back just to avoid NIA attention on him or any one of the dozen names mentioned in the chargesheet.

An accomplished actor, prolific writer, journalist and serious political thinker, Vijay Vairagade, more famously and fondly known as Vira Sathidar (or a triumphant friend – a name he adopted in the 1970s), died on April 13, following a week-long battle with COVID-19. He was 61. He is survived by his long-time companion and wife Pushpa, son Lankesh and his family. Now that Vira Sathidar has succumbed to the deadly infection, the fear of the NIA hounding him or raiding his residence in south Nagpur is no longer relevant. 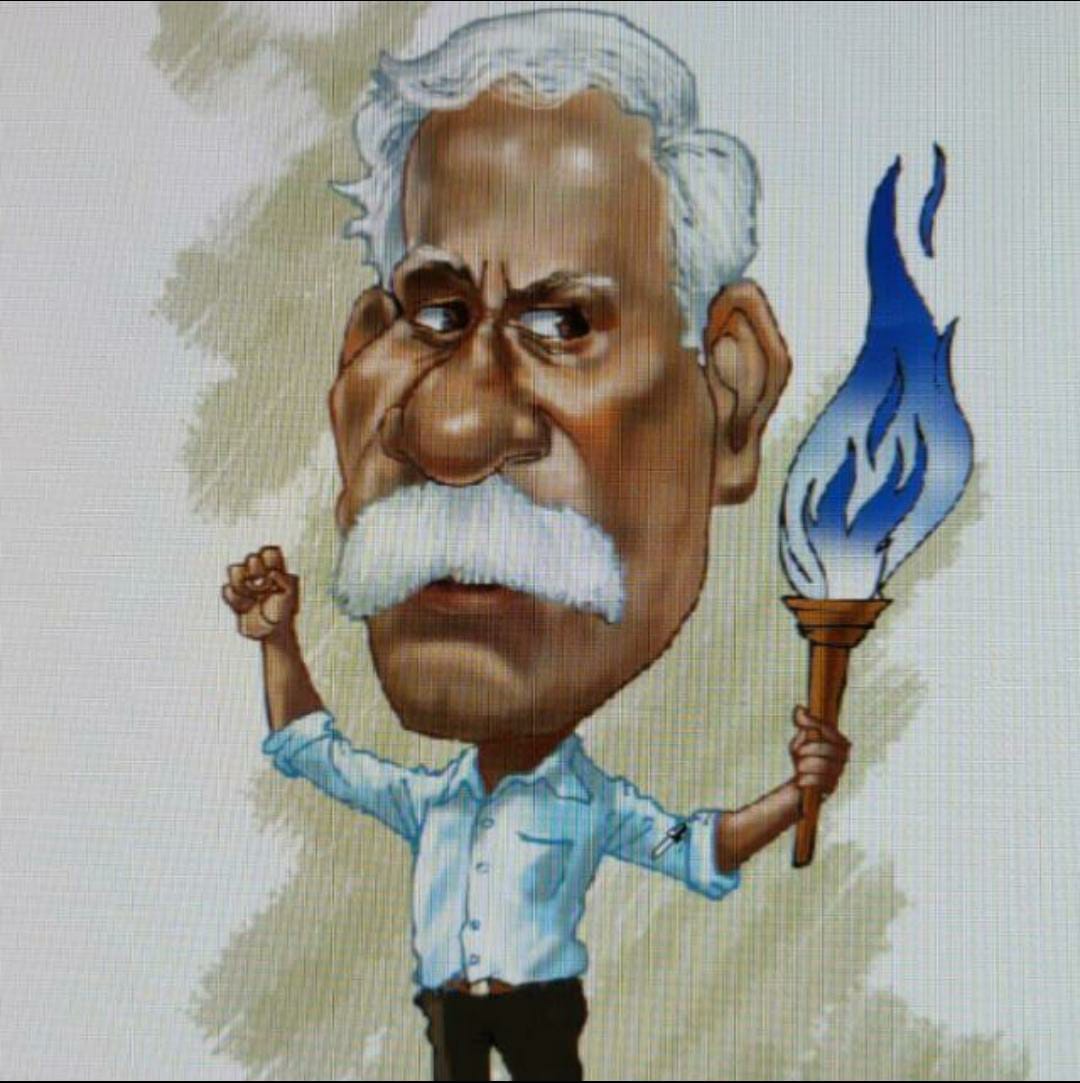 In the recent decade, Vira Sathidar’s character Narayan Kamble from the Oscar-nominated film Court gained him instant popularity in the mainstream media. But that was neither the start of his political activism nor a real reason for his popularity. In the Maharashtra anti-caste circles – both the Ambedkarite and Left circles – Vira Sathidar’s presence was always felt in abundance. He would vehemently disagree with people; they would disagree with him too. But that did not reduce his fondness and popularity. A proponent of Leftist ideology, Vira Sathidar believed both ‘caste and class’ were important to understand the social realities of the Indian subcontinent. This said, he was acutely critical of the shortcomings of Indian Left politics and their unwillingness to engage with the question of caste.

In recent years, as he began to grow his white beard, his close ones came up with one more moniker – Jija. Another tall anti-caste figure and lawyer, Eknath Awad from Marathwada, was fondly known by that name and many believed that both had an uncanny resemblance – both in their looks and political outlook. Like Vira Sathidar, Awad too had died an untimely death in 2015, leaving much socio-political work unfinished.

Vira Sathidar was only 19 when he founded and led a workers’ union in a factory in Nagpur. This registered union, Nagpur Magnet Wires Limited Employees Association, Vira Sathidar had in one of the many conversations told me, was not based on any clear ideology but “was born out of his deep desire to work for his community”. “One of the oldest unions CITU (Centre of Trade Unions) had failed the workers. We were neither getting our pay nor compensation on meeting with an accident. We knew an alternative is a need of an hour. So, I created one,” he said.

The 1970s were a formidable decade for the anti-caste movement, more specifically in Maharashtra. Dr B.R. Ambedkar had died over a decade ago. The Dalit-Bahujan youth of Maharashtra were restless; there was unemployment, poverty and increasing incidents of caste violence all around. This void gave birth to a strong anti-caste alternative – the Dalit Panthers – in the state. Fiery leaders like Raja Dhale, Namdeo Dhasal, J.V. Pawar, Arun Krushnaji Kamble, Arjun Dhangle and several other leaders sowed the seeds of resistance. The radical anti-caste movement had gathered Dalit-Bahujan communities under one umbrella organisation. But it also disintegrated within a decade.

Vira Sathidar, still very young (he was barely in his teens), felt inspired by the work done by the Panthers. But by the time he had moved from his village Parsodi in Butibori, an industrial suburb in rural Nagpur, to Nagpur city, he knew he wanted to be a “neta”, a leader. “Leadership ran in my veins,” he told me once while narrating how he chose anti-caste activism as a way of life. “My father, who had no food to eat, had travelled from his village in Vardha to only see Dr Ambedkar quit Hinduism and embrace Buddhism. His son (Vira Sathidar) ought to be a ladvayya (fighter), too.”

His father, Ramdas Vairagade, a marginal farmer, had pushed Vira Sathidar towards education. In 1978, when Vira Sathidar failed in class 10 and decided to rear cattle instead, his father reproached him for lacking “ziddh” or determination in life. “Saala Babasaheb banla asta, gaura chaarte (Would have been another Babasaheb and yet here he is wasting himself, rearing cattle),” his father had said. The next morning, Vira Sathidar had walked out of his village, come to Nagpur and started working.

In a couple of months, he had enrolled himself in a night school and even passed class XI. But his brush with formal education was a short one. By the time he enrolled himself in class 12, he was already neck-deep handling the many agitations of workers at mills in Nagpur. “I would walk into the class all sweaty, in soiled clothes, with hardened expressions. Other kids in my class who were still enjoying their lives would be scared of me. My sweat and hard work earned me respect since a very young age,” Vira Sathidar had said in his last interview to The Wire in October. He spent most of his life organising people in the south Nagpur bastis like Jogi Nagar, Bhim nagar, Kausalya Nagar, Chandramani Nagar – all considered to be hubs of the anti-caste movement in Nagpur.

Eventually, Vira Sathidar dropped out from formal school education; his political and social education, however, continued. After working in a mill till 1985 and losing a thumb on the job, he decided to focus more on intellectual pursuits. He joined Dainik Mahasagar, one of the leading Marathi dailies in Nagpur, as a city correspondent. From here, he went on to be associated with several progressive writers’ associations – working as a copy editor, writer and also advisor.

Vira Sathidar, a film buff, would be a regular at the theatres of Nagpur. But as he was always cash-strapped, he decided to channelise his energy more towards books. He would get second-hand books at throwaway prices and read them. “I had read Gorky, Marx, Fidel, Babasaheb at a very young age,” he once said. He attributes his political and social quest to his co-travellers. While Lal Nishan Paksha activist and advocate Rambhau Kolhe politically shaped him, artist Vinayak Kharade taught him the nuances of acting and performance. His long-time friend Nagesh Choudhary, who started a bi-weekly magazine Bahujan Sangharsh, coaxed him to write political columns at a very young age.

His work was not limited only to his immediate community. In 1984, when a young Pardhi youth was brutally killed in Nagpur for organising the Dalit masses and encouraging them to participate in electoral politics, Vira Sathidar decided to float an organisation for the Pardhi community in the city. “He was a young graduate; perhaps the only one from that community in my vicinity. He was killed for both being an educated man and an assertive one at that. It pained me. I decided to start ‘Aadhin Bhatke Mukta Sangharsha Samiti’,” he had recalled to me.

Similarly, soon after the Khairlanji massacre, Vira Sathidar militantly began disrupting different literary events in the state. Most literary festivals, he felt, were just a coming together of different privileged caste groups, talking about issues as if they were some distant concepts. “I would ask them will they only sit and discuss literature by stirring clear of any political and social realities or are they willing to talk of issues plaguing us. Were they willing to talk of Khairlanji?” Around this time, he with his dear friend Sudhir Dhawale started Vidrohi magazine. He was also a convener of the Indian People’s Theatre Association (IPTA), Nagpur chapter.

His political activism had always kept him on the “state’s radar”. He would say as the state slowly became “modern”, they used newer ways to control its citizens. So, when Vira Sathidar was shooting for the film Court in 2013, the Gondia police had landed up unannounced on the set in Mumbai looking for a “Naxal from Nagpur”. In the past year, when he spent a considerable amount of time raising issues against the Rashtriya Swayamsevak Sangh (RSS) headquarters in Nagpur, his house was soon raided by the local police. A sword was found during the raid, but local boys soon chased the police away.

His assertion earned him several admirers and also a few critics. But no one could dislike him. His affable, charismatic aura only earned him more and more well-wishers. So, when the news of his death broke on Tuesday, the social media space was flooded with the “final goodbye” for their great philosopher friend. Each one had a personal anecdote to share. One of his closest friends, advocate Nihalsing Rathod, wrote that he had lost his father.

Like Court, Vira Sathidar had hoped his other work too would receive similar public acceptance. After Court, he had acted in at least two feature-length films and a few short films. His multi-lingual film Pakshi by Tamil director Jagadeeshan Subu is awaiting a theatrical release.