Mother of Man Seen Pleading for Oxygen to Not Be Taken Away Dies; Cops Say Video 'Misleading'

A video showing 22-year-old Anmol Goyal on his knees, begging the police to not take away his mother's oxygen cylinder, has gone viral. The family says the cylinder was theirs. 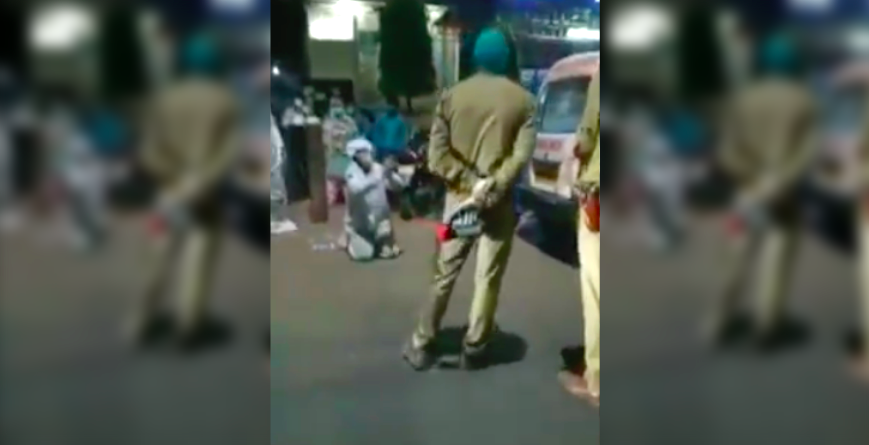 New Delhi: “My mother will die if you take away her oxygen cylinder.”

The mother of a young man – seen in a viral video pleading with Uttar Pradesh police to not confiscate an oxygen cylinder that some men under their escort are seen carting towards a van – passed away hours after the video was shot.

The video from Upadhyay Hospital in Agra shows a young man in a PPE suit down on his knees pleading with the police. On April 28, this video was tweeted by Times of India journalist Deepak Lavania, among others, and was soon shared multiple times.

भईया मेरी मां चली जाएगी… A man cried and begged policemen not to take away the oxygen cylinder he arranged for his mother in critical condition.

The cylinder was reportedly confiscated from private hospital in Agra to supply it for a VIP. (1/2) pic.twitter.com/OHjR5Xvhcj

The Wire has identified the young man as Anmol Goyal, a 22-year-old. Anmol’s mother Usha passed away two hours after the video was taken, on April 27, he told The Wire. She was 53 years old.

“The only thing that the doctor said would help her – an oxygen cylinder – was taken away from us,” Anmol said. In his tweet with the video, the TOI journalist had alleged that the cylinder was reportedly taken to “to supply it for a VIP.”

On its part, the Agra police has condemned the circulation of video and claimed that it was “fake news.”

Agra city Superintendent of Police Rohan P. Botre told The Wire, “It was an empty cylinder being taken away from the hospital for refilling.”

“Three days ago, there was some oxygen shortage in the district because of which we were helping patients to refill cylinders. The person is crying only because he was requesting the police to help him with a cylinder,” he added.

Family refutes police, says ‘It was ours’

He said that the cylinder was theirs – one that the brothers had in fact managed to secure with great difficulty.

After Usha complained of breathing difficulties at around 9 pm on April 26, Ansh – a first year BBA student at an Agra institute – set out to find an oxygen cylinder for her.

The teenager said that a doctor told him, “If you have any contacts, you will know how to arrange one. The hospital doesn’t have any left, you know that.”

Also read: COVID-19: The Adityanath Government Has Moved From Denial to Intimidation

“This is when I realised how badly the system had failed us. I was on my own if I wanted to save my ailing mother,” Ansh told The Wire.

He immediately reached out to people over social media. “After trying for over an hour to find even one person who had a spare oxygen cylinder, I had almost lost hope when a kind person told me he could arrange it. He gave it to us and did not even charge for it. But there was a problem. It did not have a regulator,” he said.

When Ansh realised that a regulator was necessary for the cylinder to start working, he placed the cylinder near his mother’s bed in the hospital’s COVID-19 ward and set out to buy the regulator.

He was still out when he got a call from his elder brother, Anmol, telling him that the oxygen cylinder had been taken away from their mother’s room by some hospital staff members.

Anmol told The Wire that he tried to stop the men from taking the cylinder away. Ultimately, while the oxygen cylinder was being taken away, he knelt down with folded hands and yelled, “Meri maa marr jayegi…”, as seen in the viral video.

“When I asked the ward boys why they were taking away our oxygen cylinder, they told me that they want to save somebody’s life. Who is that somebody? And is my mother’s life not valuable enough?” Anmol asked.

By the time Ansh reached, he saw that the oxygen cylinder was gone. “I tried talking to the hospital staff but they did not speak to me. They started shooing me away, saying that I should stay away from them as coronavirus is spreading,” he said.

The struggle for the two brothers began much before that day. The sons, alarmed with their mother’s dropping oxygen levels, first hospitalised her on April 22. An RT-PCR test was done the next day. The result for it has still not reached the boys.

The Wire has reported on the huge backlog at testing centres, coupled with lack of testing kits.

On April 23, a CT scan was done after the boys agreed to pay Rs 50,000 – a five-day advance to the hospital. After the CT scan result arrived, the doctor told the boys that one of their mother’s lungs had been damaged due to COVID-19. Remdesivir was required to stabilise her condition, but none was available at the hospital.

“There was a huge crisis of Remdesivir and we couldn’t find it anywhere. But I think some people are stocking it and selling it for huge prices. Once the ward boy told me that he could arrange one Remdesivir injection if we agreed to pay Rs. 40,000 for it,” Ansh said.

Two days later, the hospital formally told the boys to shift their mother into SN Medical College, a government hospital, as they did not have the required resources to monitor her. However, since no beds were available at SN Medical College, she remained at Upadhyay Hospital.

After the boys’ mother died, the hospital staff told the family to take the body for cremation. “The hospital did not have enough staff. We had to call a worker from the Shri Paras Hospital to pack our mother’s dead body,” Ansh told The Wire.

After that was done, the struggle to find an ambulance began.

“Our town, Achhnera, is 27 km away from Agra city. And yet, the ambulance provider charged us Rs 25,000 to transport the body. Everybody is just trying to make money out of people’s misery and helplessness,” Ansh said, breaking down.

At 7 am on the same day, her last rites were performed in her town of Achhnera. Usha Goyal’s husband and four children – two sons and two daughters – say they are devastated and do not wish such misery on anybody else.