Use of 'Divyang' is Regressive and Patronising, Say Persons With Disabilities

The rail budget became the first official document to use the term ‘Divyang’, coined by Prime Minster Narendra Modi to refer to persons with disabilities. But it has not gone down well with the disabled community 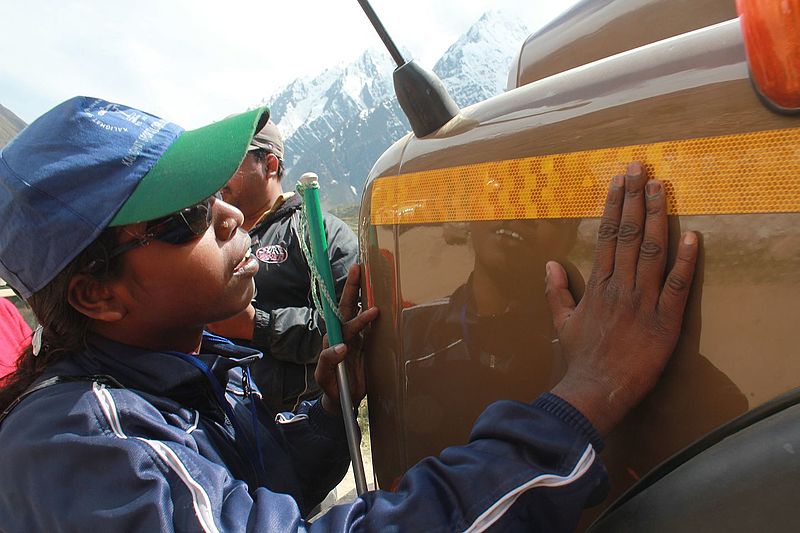 New Delhi: The rail budget is an unusual occasion to give a new name to people with disabilities, and that too an official one. The government did – using the term ‘divyang‘ for the first time in an official document – and it might just have got on the wrong side of an already agitated part of society.  There’s a good chance that it may escalate into a confrontation between persons with disabilities and the government in the months to come if the Centre goes on to give the new term a legal base.

In his budget text, railway minister Suresh Prabhu used the expression ‘divyang’, coined by Prime Minister Narendra Modi last December, to refer to the disabled community, thus making the document the first government text to have mentioned it officially; the usual official (and widely accepted) nomenclature is persons with disabilities (PWD).

This change of terms springs from the December 27 ‘Mann Ki Baat’ episode where the prime minister said persons with disability have a “divine ability” and therefore should be referred to as divyang instead of the Hindi term viklang. Soon after, various ministries jumped into action. The ministry of social justice and empowerment (MSJE) took the lead by writing a letter on January 29 to various stakeholders and activists in the states and Union Territories to build a consensus on giving a legal basis to divyang instead of the present viklang.

SJE minister Thawaarchand Gehlot’s letter said, “With a view to taking forward the use of the word ‘divyang’, that is ‘persons with extraordinary abilities’ and giving a legal base for the use of this word, the department intends to invite the views of all stakeholders including states/UTs.”

However, the news about the ministry’s proposed change in nomenclature, including in the legal instrument, was not taken lightly by the activists and others from the community. Two sets of letters were addressed to the PM expressing their disagreement with it, first on January 17 and then in an open letter on January 22. However, Modi continued to use the term publicly, first at a rally in Varanasi on January 22 and at the launch of the government’s accessibility campaign on December 3. Addressing the public in Varanasi, he said, “What I want to do is change the mindset about differently-abled people. When I say let’s use the word ‘divyang’, it is about that change.”

In the January 17 letter, as many as 71 organisations and individuals reportedly said, “Even while not questioning the motive behind coining of this expression (by the PM), it is needless to say that mere change of terminology is not going to bring about any change in the manner in which people with disabilities are treated (in India). Invoking divinity will not lessen the stigma and discrimination that persons with disabilities have been historically subjected to and continue to encounter in their daily lives.” The signatories said, “We would like to reiterate that disability is not a divine gift. And the use of phrases like ‘divyang’ in no way ensures de-stigmatisation or an end to discrimination on grounds of disability.”

After the January 22 address of the PM – read out by finance minister Arun Jaitley at the launch event of the government’s accessibility campaign in New Delhi – the National Platform for the Rights of the Disabled (NPRD) said in an open letter to Modi, “Exclusion and marginalisation can’t be addressed by using patronising terms like ‘divyang’. On the contrary, it will only invoke sympathy and underline that charity is what counts.”

Now that the term is mentioned in the Railway Budget to refer to PWDs, it seems the Centre is making the term official. This has forced the disabled to ask the government to explain what defines it and the need to expand the definition of PWDs to include divyang.

Meenakshi Subramaniam, one of the signatories to the January 17 letter and associated with the Chennai-based Equals Centre for Promotion of Social Justice, asks, “We know what viklang means, what is the scope of the word. But we don’t know what defines divyang. Who is a divyang? Because we know we are not divyang, we have no divine limbs and abilities. Since no separate law has come up in the country (the existing law is called Persons with Disabilities (Equal Opportunities, Protection of Rights and Full Protection) Act, 1995) and the existing one calls us PWDs, we need to know who is a divyang.”

Wheel-chair bound Subramaniam underlines that the consensus term for the community as per the United Nations Convention on Rights to Persons with Disabilities (UNCRPD), to which India is a signatory, has been PWD. “Till now, that was the term used officially and viklang in Hindi. People from the community have more or less accepted the term viklang because it points at an organ, an ‘ang’, that is ‘vik’ or not functioning as it should. But divyang is an absolutely regressive and patronising term as it puts us in the charity bracket. We don’t want anyone’s sympathy but our rights. Divyang means you have divine limbs or organs, which means we don’t need anything. We don’t want divine powers, nor do we have any. All we want is the right to be treated equally and the government can’t wash off its responsibilities just by coining a new term.”

Here, Subramaniam and some others from the community refer to the term ‘harijan’ coined by Mahatma Gandhi to refer to the dalits. “Gandhiji’s intention was good too; he wanted to stop people discriminating against the Dalits by calling them children of god. Finally, nothing changed for the dalits on the ground,” points out Subramaniam.

P.K. Pichai, the first person with disability to become the chief commissioner for disability in the Government of India, says “Finally, someone had to go to the Supreme Court urging that the expression harijan should not be used for dalits.” He too finds the term divyang patronising. “I don’t want anyone to sugar-coat my disability. It takes people away from the reality. Also, like there are handsome, ugly, tall, short, fair persons in a society, a blind person like me is also part of that diversity. My blindness doesn’t say anything more than that diversity, certainly nothing about whether I have divine abilities or not.”

Pichai says he has problems with terms like differently-abled and specially-abled too. “These are again patronising terms. Ability is ability and different people have different abilities. Don’t the so-called able people have different abilities? Then why are we only singled out? You have to see the mindset behind a term. For instance, before using the term handicap you should know where it came from. The word was originally used in Europe to mean beggary and then it graduated to include the PWDs too as people thought the disabled can survive only with a bowl. Same with Hindi terms like akhyam. If mindsets have to be fought, it has to done not by giving a glorifying term but by making efforts that actually bring changes on the ground.” Delhi-based Abha Kheterpal, also a signatory to the January 17 letter, calls it “an attitudinal barrier which can’t be legislated.”

‘Divyang’ will lead to identity crisis

“The term divyang can invoke emotions in people but has no practical use. We have been made ‘human-angel hybrids’ now. I am a psychologist by profession and I can tell you that this will lead to an identity crisis among PWDs. People will be confused as to who they are. On one hand, they are people with divine powers and on the other, they can’t even get a glass of water on their own,” says the wheelchair-bound activist. She also points out, “It doesn’t work even from the economic point of view. We are a sizeable population in this country, so we should be adequately educated and employed. Public places should be made accessible to us so that we can contribute to the economic wellbeing of the country.”

Reacting to the Railway Budget, Equals, in a press note on February 22, asked the government to not only define divyang but also posed some others questions including why wheelchair services at stations have been designed as paid services for PWDs.

“Till now, even if the wheelchairs are for free at railway stations, a PWD has to pay a hefty sum to the person pushing the chair. It therefore can’t be used by all. The February 22 rail budget mentions ensuring availability of wheelchairs in sufficient numbers only at A1 stations. Also, since the wheelchair service has been mentioned along with other special services like battery operated cars, etc., there is no clarity on whether we still need to pay for the services,” she points out.

Though the government’s accessibility campaign mandates the railway ministry to make all A1, A and B platforms accessible by July 2016, the rail budget only mentions that it will try to make “all stations under redevelopment accessible by the divyang” and will “make effort to make at least one divyang friendly toilet at each platform in A1 class stations during the next financial year.”

Disabled People’s international chairperson Javed Abidi points out another anomaly in the rail budget. “It says there will be at least one disabled friendly toilet in all A1 stations. But I want to remind the ministry that all A1 stations already have one accessible toilet. What is needed is all existing toilets be made accessible and to have one such toilet on every platform.”

Amidst such teething problems, with the added concern now over the rail budget using the term divyang “without taking the disability community into confidence”, Khetarpal says, “I plan to file an RTI application to know how many organisations have been asked for inputs by the Union minister for SJE on using the new term instead of viklang.”