The workers are protesting against a new subscription system where they will have to pay a deposit amount and complete a monthly target of 40 jobs. It also involves penalising those who refuse to follow the changes. 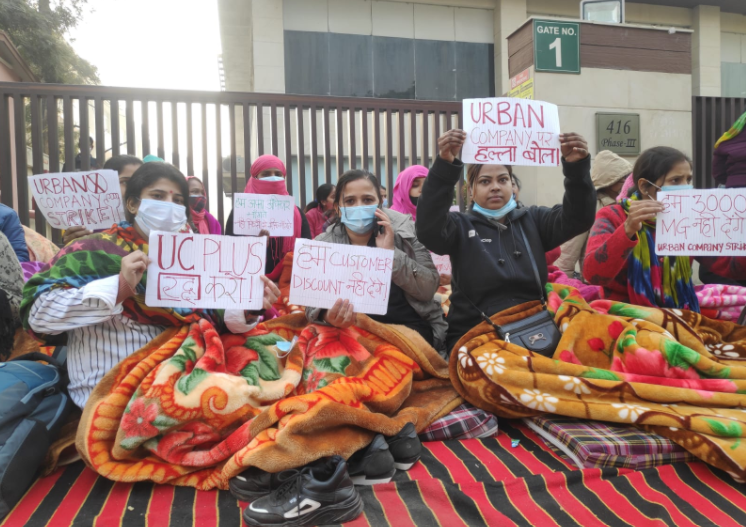 New Delhi: Urban Company, India’s largest home services provider, on Tuesday filed a lawsuit in the Gurugram district court against its “partners” for protesting against the company’s alleged “unfair labour practices”. The firm refers to its workers as “partners” and not workers.

UrbanClap Technologies India Pvt. Ltd has sought a permanent prohibitory injunction from the court restraining the women from holding any “demonstration, dharna, rally, gherao, peace march, shouting slogans, entering or assembling on or near the office premises.”

The application sought directions to the workers to cease their “illegal” protest and vacate the company’s office, main entrance and parking area, and asked the court to direct the local police to disperse the protesters.

About 50 women “partners” of Urban Company’s salon and spa vertical protested outside its office for two days starting December 20, Monday against policy changes proposed by the company that they believe will directly impact their earnings. The changes will come into effect from January.

According to All India Gig Workers’ Union (AIGWA), the protesting women called off the protest on December 22, Wednesday after the Gurugram administration imposed Section 144 of the Criminal Procedure Code (power to issue order in urgent cases of nuisance or apprehended danger).

However, the workers told The Wire that they are still determined to continue the protest as it is a “big, long fight” for their dignity and safe working conditions. Most workers have been associated with the platform for the past few years.

Braving cold weather, the protesting women on Monday arranged for quilts and slept outside the building, when the company shut its main gates and did not allow its workers, some of whom were pregnant, to use the washrooms inside the building. The company was recently valued at $2.8 billion, up from $2.1 billion valuation in June.

The protesters slept outside the company building. Photo: Special arrangement

AIGWA representative Rikta Krishnaswamy told The Wire that the company had recently introduced a category called “Flexi”, which involves penalising workers who refuse to participate in the new “subscription system”.

The workers are also worried that their response rates, if low, may result in lower incomes as the “Flexi” system only assigns jobs to people with quick response rates.

Also read: Six Challenges of Being a Gig Worker During the COVID-19 Pandemic

Seema Singh, one of the protesters, who works as a beautician, told The Wire that under the new subscription system, the workers will have to pay a fee of Rs 3,000 (for salon prime) and Rs 2,000 (for salon classic) upfront to the company under the minimum guarantee plan to ensure that all workers complete a target of minimum 40 jobs. “If I am unable to complete 40 jobs any month, I will lose that deposit,” she said.

This goes against the very USP of the company, which is “flexibility”, she said.

“The company needs to see us as humans and reduce the minimum number of jobs to 30. The company anyway doesn’t call us its employees. We are contractual ‘partners’ or freelancers, we do not enjoy the benefits of a normal job but dignity has to be ensured,” she added. She also told The Wire that a worker had been penalised during the lockdown for not completing a job.

In case if the worker chooses to opt out of this plan, they will automatically be put into the “Flexi” category, in which they can only work on high demand days – Friday, Saturday and Sunday.

The protesters also told the reporter that workers in certain categories are asked to provide customers with a discount of 10% from their earnings.

The AIGWU in a statement said, “There is an immediate need to classify gig workers as employees so they may benefit from any legal infrastructure that would otherwise fail to protect them as a result of their employment.”

In October, about hundreds of workers associated with the platform had staged a protest demanding better wages, safer working conditions and social security benefits. After the protests, the company had announced some initiatives for workers’ safety. However, those safety initiatives are now under threat due to the new system, the protesters said.

One of the workers told The Wire that they are considering fighting a legal battle over the issues, as her incomes have gone down from Rs 25,000 per month to just Rs 5,000-8,000 due to such policies.

Out of the four women who were named in the application filed by Urban Company, only one received a legal notice to appear in court.

Krishnaswamy told The Wire that the company has claimed that the protesting women have been “dissident to the point that they are forcing other women to join a WhatsApp group to conspire against the company despite their attempts to sort it out amicably”.

She also said that the targets set for the workers are often unachievable, structured to “get more work done, with fewer workers”.

Referring to a “bad rating algorithm”, she further said that the parameters using which the company workers are ‘rated’ forces them to bear mistreatment by customers.

“Simple metrics like being on time, quality of service should be used instead of assessing the partner’s behaviour. Sometimes customers rate the partners badly just because they request to use the bathroom,” she said.

She suggested that multiple internal categories for workers’ performance should be broken down into two or three simple categories.

“Penalisation should not be used to increase workers’ productivity. Delivery platforms are a good case study, think of how quickly food is delivered to people, but it comes at the cost of the worker’s life. The only solution in the long term I see for this is to give these women a proper employment status with all benefits, or formalisation of the gig economy workers,” she said.

She also addressed that companies often take advantage of the huge reserve of unemployed youth in the country and exploit them.

The AIGWU statement said, “The company’s injunction thoroughly exaggerates the intent, actions and just demands of the protesting women. They have also said that these women workers have threatened the company’s property. But the fact is that the strike was peaceful and in full public view. The only real threat is to the business model of untethered exploitation and rampant wage theft.”

The Wire reached out to Bhavya Sharma, associate director of PR and Communications, Urban Company for a comment, but has not received any response.