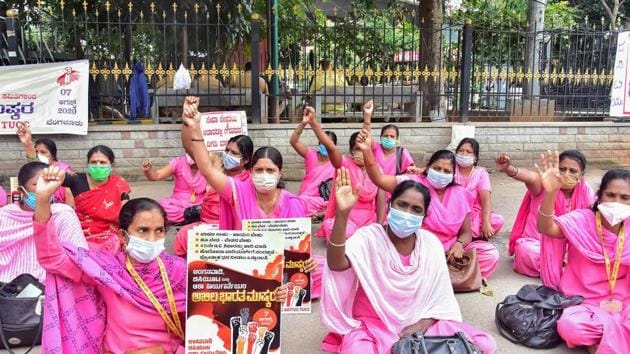 Mumbai: On March 24 last year, the Narendra Modi government had suddenly announced a nationwide lockdown to stem the spread of COVID-19 cases in the country. While the suddenness of the decision has had a lasting impact on most people, it is the marginalised communities that were the worst impacted. Loss of livelihood, unsafe working conditions, starvation and exploitation have since become a common feature in the lives of many across the country.

Sharing testimonies and difficulties faced in the past year since the pandemic hit the country, several representatives of ASHA workers, sanitation workers, daily wage labourers, transgender persons, sex workers spoke at a webinar organised by Bahujan Economics, a collective formed by Bahujan students of economics from across India. The collective, formed last year to bring an anti-caste perspective to economics, has also been trying to increase Bahujan participation and representation in the world of economics. “One of our most ambitious dreams is to have more Dalit and tribal women economists,” the group mentioned in the webinar.

Nitin Lahore, a community leader from Indore in Madhya Pradesh and a member of the Valmiki Youth Welfare Centre, shared stories from sanitation workers working in Indore and close-by districts. Indore, ranked India’s cleanest city under the Swachh Bharat Abhiyan, has for years been exploiting sanitation workers, he said. “Even after working in a department for 25-30 years, several safai karamcharis in the district continue to be “casual workers”. The work condition continues to be unsafe and even at the time of a pandemic, the district administration has done nothing to protect their lives. And for all this, a sanitation worker gets paid a meagre Rs 11,000,” he pointed out.

Lahore shared that the condition of most casual workers, engaged in sanitation work in the district, has only worsened in the past year. “Young children who were in school until just last year can be seen with their parents sweeping streets. It is upsetting to see them in this condition,” he added. Lahore, who has been closely chronicling the lives and working conditions of the workers, mostly belonging to the Scheduled Castes, said even in such challenging times, the state administration has neither provided safety gears or made any insurance allowance for the workers.

The condition of the sanitation workers in Indore is no different the ASHA workers in Haryana. Sharing stories of the difficulties faced by ASHA workers in Haryana, the workers’ union’s representatives Surekha said that one of the worst nightmares of the ASHA workers has been debunking rumours and false claims made by political leaders and government representatives. “Politicians would make irresponsible, unscientific comments and it would have a direct impact on the ground. Right from the beginning of the first wave till date, ASHA workers have had a challenging time educating people about the seriousness of this pandemic and convincing them in taking adequate precautions and vaccines,” Surekha shared.

She further added that ASHA workers were exposed to the worst working condition for meagre pay of Rs. 4000. “Most states failed to provide PPE kits to ASHA workers. The workers are overworked and exhausted. From bursting myths to creating awareness about the pandemic to convincing people to get themselves vaccinated, the ASHA workers have done it all. But still, they have not been covered under any government policies,” Surekha claimed.

Her colleague Kamlesh, also from Haryana, shared that the government’s attempt to give a communal colour to the pandemic made things difficult on the ground. “There were several attempts made to give a communal twist to the pandemic and concerted efforts were made to criminalise the Muslim community. While working in Haryana, we had to put in extra efforts to debunk these irresponsible stories and also defuse several tense situations,” Kamlesh shared.

Kamlesh added that ASHA workers have been working as “corona yodha (warrior)” across the country but have hardly been recognised. “Instead, we are being threatened of a pay cut if we don’t achieve the difficult targets set up every day,” she said.

In Haryana, Kamlesh claimed, ASHA workers have been forced to mandatorily download an application on their mobile phones. This application, Kamlesh says, is meant to track their movement. “Chaar hajaar rupaye ke liye maanasik gulaami karvana chahte hai (The government is forcing us to be their slave for a meagre Rs 4,000),” Kamlesh shared in the webinar.

Among the most invisible victims of the pandemic were the women engaged in sex work, said Kiran Deshmukh, president of the National Network of Sex Workers. Deshmukh said the lockdown and the pandemic hit the sex workers’ community on several levels. “Our work involves intimacy. There was no way we could have continued to work on the pandemic. But the government completely neglected us,” she said. She further added that as soon as the pandemic broke out, one of the first demands was to shut down brothels and sex work. Many researchers in the US claimed that sex workers will play a significant role in spreading the COVID-19 infection.

“This made our survival difficult. We somehow tried to pull through the first wave; we even managed to save ourselves from the viral infection in the first wave. But in the second wave, many women were infected. We even lost several women to this virus,” Deshmukh said. She added that the community is debt-ridden and out of jobs.

Since the pandemic outbreak, the government decided to divert all its resources and health infrastructure in tackling the COVID-19 virus. But that also meant patients fighting other illnesses were ignored, said Grace Banu, a transgender rights activist from Tamil Nadu. “And among the trans community, the HIV patients were deeply impacted by the state’s decision,” she said. Grace Banu added that most patients needing the ART doses were in dire strait and in need of urgent medication. The transgender community, Grace Banu said, lacks the support of both civil society and the government. “When it comes to the transgender community, many platforms step aside. It’s the same with the government. Trans community fights with every single problem on their own and It’s hard to see that many people don’t raise their voice or don’t want to talk about our condition,” she added.