The CID filed a chargesheet against 34 policemen on Wednesday, accusing them of trying to turn the case into one of "beef being found". 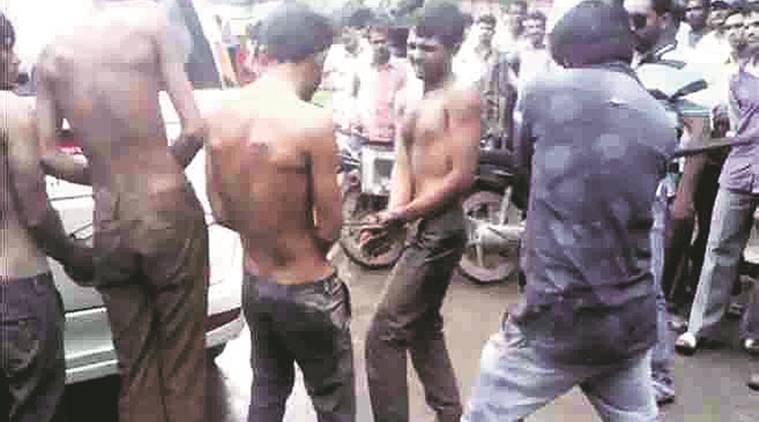 Screengrab of the Dalit men being hit with iron rods in Una.

According to an Indian Express report, the Gujarat Criminal Investigation Department (CID) has accused the local police in Una of fudging facts in the case of Dalits being beaten by “gau rakshaks” for skinning a dead cow.

The incident, which was video recorded by the perpetrators and later went viral on social media, caused large scale anger and protests from the community.

The CID filed a chargesheet against 34 people, including policemen, on Wednesday, accusing them of trying to turn the case into one of “beef being found”. Four of these policemen, including the former police inspector at the Una police station, were arrested before the chargesheet was filed, for negligence, wrong reporting and taking a case that wasn’t in their jurisdiction, the Business Standard reported.

According to an NDTV report, the CID also alleged that though four Dalits were thrashed for several hours, these police personnel did nothing to stop the crime. They also allegedly forged certain FIR-related documents to help the accused.

While the Dalits were being beaten and forcibly taken away from Mota Samadhiyala village by the gau rakshaks, a group of villagers tried to help them. After being threatened by the accused, the left the scene and called the police control rooms in Gandhinagar and Ahmedabad.

“The state control room (Gandhinagar) diverted the call to Una police station officer (PSO) saying that some youths were being beaten up. However, the local police didn’t act for nearly four hours after registering the information in their logbook. Later, they added a line that ‘cow meat was found’ and thus fudged the information,” inspector general of police (CID) Shashikant Trivedi, leading the probe, told the Indian Express.

“The control room sent the report around 1:30 pm to Una police station. Our investigation found that the PSO added the line about beef being found around 9:30 pm, when his shift was ending. The CID found this in the log data as taped conversations from calls made to the number 100, by the victims’ relatives seeking help,” a source told Indian Express.

The CID chargesheet also encloses the forensic report, backed by eyewitness testimonies, that said the cow was killed by a lion and not the people skinning it. Despite the owner saying that his cow was killed by a lion, the CID has said that the accused police officers falsely lodged “missing complaint on behalf of the cow owner”, even though the village where the cow was from was not in their jurisdiction.

Special public prosecutor Dipendra Yadav also told Indian Express that the accused policemen are guilty of fudging records. “The FIR which they lodged named only six accused despite the fact that the victims have said more than 40 accused had assaulted them. Among the six accused, two names were repeated by the police. That is also a mischief in order to shield the accused,” he said.