Despite Tragic History of Sterilisation Camps, Chhattisgarh Has Not Learnt Its Lessons

In late August, a Community Health Centre performed more than 100 sterilisations in just eight hours, ignoring safety guidelines. While death was avoided, the incident showed that the system has not changed. 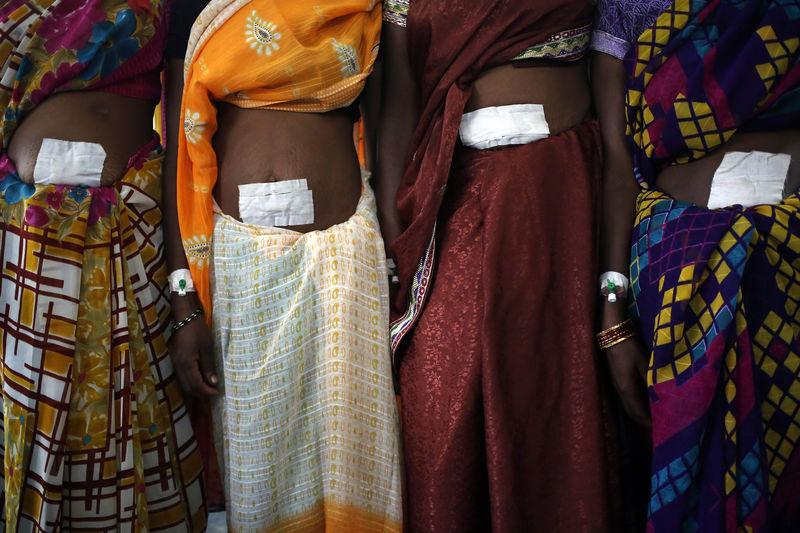 Women who underwent sterilisation surgery at a government mass sterilisation camp pose for pictures inside a hospital at Bilaspur district in Chhattisgarh November 14, 2014. Photo: Reuters/Anindito Mukherjee

These women hailed mainly from Mainpat and Sitapur blocks of the district. According to the District Census data from 2011, Dalits and Adivasis make up 4.9% and 55.11% of the population respectively.

On August 28, the Surguja chief medical and health officer (CMHO) Poonam Singh Sisodia served notice to the surgeon and the block medical officer (BMO). Sisodia said further action will be taken after the probe committee report.

The state health secretary, Alok Shukla, also ordered an inquiry on September 3. He said, “Fortunately, all women are healthy and sound but because the number of sterilisation operations has crossed the stipulated guidelines, I am ordering an inquiry into the matter.” The fact that the women are alright is but only a small consolation here.

“It is almost as if the state learnt no lessons after what happened in 2014,” said Sulakshna Nandi, the joint national convener of Jan Swasthya Abhiyan. Nandi was referring to the mass sterilisation drives in Bilaspur district, Chhattisgarh, in November 2014, that resulted in the deaths of 13 women and the hospitalisation of many others.

Dubious history of sterilisations in Chhattisgarh

The fact-finding report by Sama Resource Group for Women and Health, Jan Swasthya Abhiyan, and National Alliance for Maternal Health and Human Rights noted that the women who died belonged to Dalit, Adivasi and OBC communities. These women were mostly from landless families who depended on daily wage labour.

Calling this fiasco “undeniably appalling and a gross violation of standards of asepsis”, the report also noted that “the time for each procedure and the time between procedures was evidently minimal, suggesting serious compromises with regard to the safety and the quality of the procedures.”

“This was a tragedy waiting to happen given the way targets were prescribed and camps were held,” said the public health experts interviewed in the report. The state government had set a target of sterilising 1.5 lakh women that year. The Mitanins, frontline health workers in Chhattisgarh, who spoke to the team acknowledged that they were expected to bring around three cases each to the camps.

In 2016, the Supreme Court finally took cognisance of this devastating tragedy. The judgment stated, “363 women died between 2010 and 2013 during or after surgery in sterilisation camps due to  poor management by local authorities which included doctors using dirty equipment and expired drugs.”

The judgment also stated that the government must “hold negligent doctors accountable.” But, that was far from a happy ending to this legal battle.

Dr R.K. Gupta, the surgeon involved in the camps and accused of spending hardly three minutes per patient and not paying heed to sanitary protocols, had been honoured earlier by the state government for the distinction of conducting the maximum number of sterilisations. When he was charged with negligence and attempted culpable homicide, the Chhattisgarh unit of the Indian Medical Association called for a state-wide strike. The Chhattisgarh high court finally acquitted him on “technical grounds” in 2017.

Nandi said that the doctor went scot-free but the women and their families continued to be victimised. The families were not given proper medical records and many still believed that the deaths were due to rat poison in the medicines. In 2017, Nandi documented that the judicial commission, based in Bilaspur city, made no attempt to reach out to the affected families. The families were expected to “travel to Bilaspur city, draw up the affidavits, make five copies each and submit them to the commission, all at their own cost.”

The recent debacle in the Narmadapur CHC is not a one-off incident but a testament to how unmet contraceptive needs of women are taken advantage of by the system.

Rajim, a member of the Dalit Adivasi Sangathan Manch in Baloda Bazar and Mahasamund districts of Chhattisgarh, said that sterilisation operations had been stopped since the nationwide lockdown was imposed in March 2020.

The pandemic had aggravated unmet needs for contraceptives. A study by Ipas Development Foundation found that 1.85 million Indian women could not terminate their unwanted pregnancy during the first three months of the lockdown. The Foundation for Reproductive Health Services India (FRHS) also estimated that the lockdown could lead to 2.3 million unintended pregnancies.

In rural Chhattisgarh, condoms and emergency contraceptive pills continued to be supplied. “I doubt this was ever scaled up to keep up with the closure of sterilisation and the rising unwanted pregnancies during the pandemic. There is no data about it,” said Nandi.

Rajim confirmed with a doctor that the government had only resumed with the Jansankhya Sthirikaran Abhiyaan on World Population Day on July 11. Over 250 women in five blocks of Mahasamund district have been sterilised since then.

Often, these sterilisation operations are conducted in makeshift ‘camps’ with inadequate services and sanitary protocols. In 2002, based on the pleas of Healthwatch Uttar Pradesh, a civil society coalition, the Supreme Court issued directions for reviewing the quality standards in these camps. But, sterilisation camps fall notoriously short of these standards even now.

“In the pre-pandemic times, I have seen women lying down unconscious on the floor of these camps. What do I even say about cleanliness and facilities? Beds are usually not available, unless the camp is in a new and/or large hospital. It is only the newly built hospitals that pay heed to infrastructure and sanitary protocols for sterilisation,” said Rajim.

Nandi ruefully noted that when male journalists from urban areas reached out to her for comments, they were dismissive of sterilisation and of the unmet need for contraceptive services in general – almost as if shocked to find that families in rural India want these services. But, given the socio-cultural and economic context of Chhattisgarh, temporary contraceptives are not a universal solution. “It can be difficult for women to convince their partners to use temporary contraceptives. Sterilisation, on the other hand, can be a necessary and liberating experience for women. However unless there is a radical change in government programmes and more emphasis is given on male sterilisation, women will continue to suffer” said Nandi.

For the full realisation of sexual and reproductive rights, the State must pay heed to the experiences and lessons from the 2014 tragedy. Sterilisation should be offered as a safe, affordable, accessible, non-hazardous, and non-invasive option of contraception. Information and access to all contraceptive services, and there has to be an active effort to engage men in the conversation at the earliest. This needs to be complemented with due legal procedures for action against any and all violations. Especially, considering the havoc unravelled by the pandemic on all healthcare services, this is perhaps more important than ever before.

Sweta Dash is a researcher and journalist working on sexual and reproductive health rights, identification documents, and welfare rights.