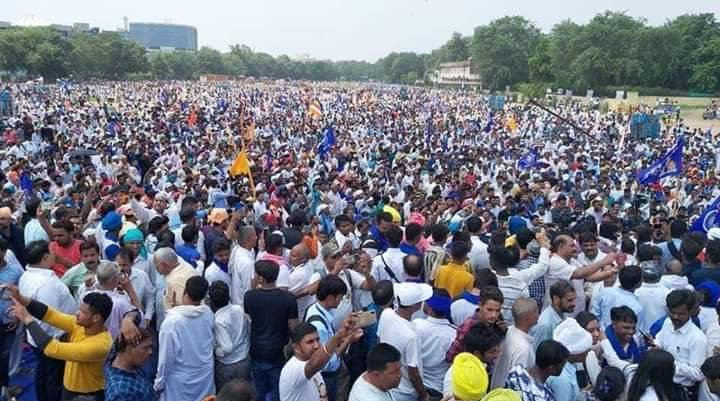 New Delhi: Tension prevailed in the Tughlakabad area in south Delhi after a protest by Dalits against the demolition of a Ravidas temple turned violent on Wednesday, prompting police to resort to “mild lathi charge” and use tear gas to disperse the crowd, an official said.

According to the police, the protesters set fire to two motorcycles and vandalised a police vehicle, causing injuries to a few policemen.

The protesters reportedly turned violent during their march to the site of the temple demolished by the Delhi Development Authority (DDA) on August 10 on the orders of the Supreme Court.

Earlier today, the stretch between Jhandewalan and Ramlila Maidan in central Delhi turned into a sea of blue as thousands of Dalits from various parts of the country hit the streets of the city on Wednesday to protest the recent demolition of a Ravidas Mandir in the national capital.

Wearing blue caps and carrying flags, protesters of all age groups marched from Ambedkar Bhawan in Jhandewalan to the Ramlila Maidan. Traffic movement was affected in some parts of the city.

Cries of ‘Jai Bhim’ rend the air as the protesters, who arrived from Punjab, Rajasthan, Haryana, Uttar Pradesh and other states, demanded that the government hand over the plot of land to the community and rebuild the temple.

The protest in Delhi came a week after a similar protest of Dalits in Punjab on August 13 over the issue.

The issue has taken a political hue with various parties demanding that the temple be reconstructed either at the same spot in Tughlakabad forest area or at an alternative location.

Gautam said their fight is against the injustice meted out to the community and not against the Supreme Court order.

“I am here as a representative of the community and not as a Delhi minister or politician. We respect the Supreme Court order, but the government should answer why only temples of the Dalit community and statues of B.R. Ambedkar are being demolished across the country?” he asked.

Gathered under the banner of Akhil Bharatiya Sant Shiromani Guru Ravidas Mandir Sanyukta Sanrakhshan Samiti, an umbrella body of Dalit groups formed for this temple movement, the protesters resolved to continue the fight till their demands were met.

Some even proceeded on an indefinite hunger strike at the Ramilia Maidan.

Hansraj Raj, 42, who travelled to Delhi from Punjab’s Jalandhar, asked, “How is our demand different from that for the construction of a Ram temple in Ayodhya? If that is so important for a particular community, this is important for us.”

V.P. Singh, 60, from Ghaziabad said thousands of religious structures have come up on government and forest land. “Why only a temple of Sant Ravidas was razed? The government should answer”.

Sonu, 30, said, “They are asking us to construct the temple at an alternative place. Why don’t they shift the Ram Mandir to some other place? Everything happened in the blink of an eye. We didn’t even get to know of the SC order. Are we not citizens of India?”

Another protester alleged that the apex court diluted provisions of the SC/ST Prevention of Atrocities Act, “without considering the views of Dalits”.

Shrishti Devi who came from Punjab’s Pathankot said she voted for the BJP in the Lok Sabha elections but the party-led government hurt their religious sentiments.

Dhail Singh, 83, said being a Dalit himself, president Ram Nath Kovind should have intervened in the issue.

“The temple was around 500 years old. Many governments have come and gone, but no one touched it. It is the anti-Dalit BJP that has hurt the sentiments of crores of people in the country,” he alleged.

Goel said that he held a meeting with community leaders recently and offered them a solution, but the AAP wanted to score brownie points.

“I have proposed that the temple be built at an alternative place after the approval of the Supreme Court. If they agree, we will take the matter up with the DDA,” he said.