The World Is Watching, India

Across the world, diaspora communities observed Independence Day more as a protest than as a reason to celebrate. 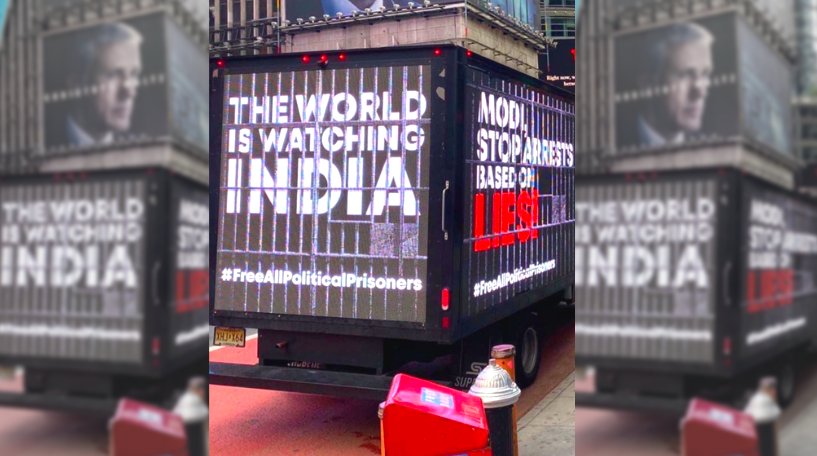 Seattle: Overseas festivities marking the Independence Day of the world’s largest democracy are normally an occasion for a collective expression of joy and pride. As India entered its 74th year of Independence, however, the mood was, if not entirely grim, unusually somber. Across the world, there were resolute expressions of solidarity at the rising intolerance and authoritarianism of the Indian state against constitutional and human rights defenders at home.

From New York to San Francisco, from Boston to Seattle, major American cities witnessed a diverse series of actions expressing anger and concern at the burgeoning roster of India’s state repression, and focusing attention on the growing plight of those being arrested under false charges and draconian laws. Voices that were raised across the world, from UK to South Africa, Malaysia and Australia.

In Seattle, at 3 pm on the eve of August 15, a bunch of us – Indians, South Asians, and activists for global justice – gathered outside the office of Congresswoman Pramila Jayapal, and handed her a petition, which asked for the reinstatement of the earlier ban on the entry of Prime Minister Narendra Modi into the country. 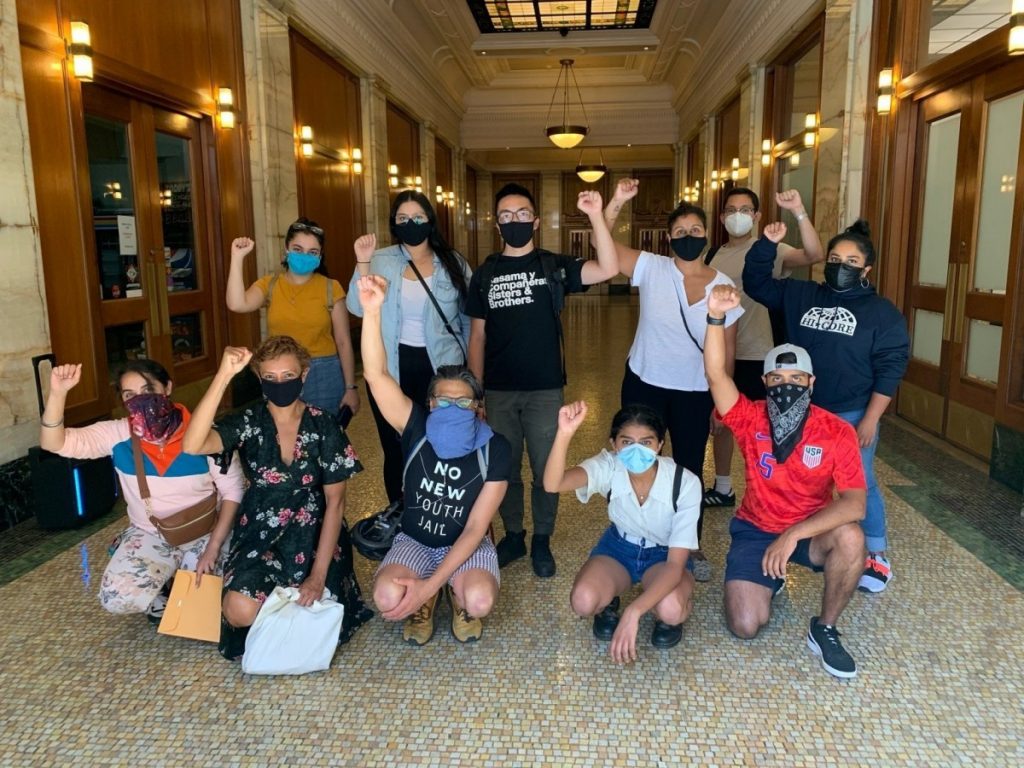 The petition also called upon the Gates Foundation, which gave Modi its top human rights award last year, to remind the Prime Minister of his constitutional obligation of according equal rights to all communities living in India, which has been so flagrantly and fundamentally violated by the recently passed Citizenship Amendment Act.

It is fitting that we had come together in Seattle, a city where the struggle against anti-black police violence is surging, and which highlights the importance of connecting the struggles of minorities globally. We were there to condemn the role of the police, both in Delhi in the specific context of the recent violence and in the US, to criminalise entire communities – black people in the US, Muslims in India – to expose those communities to mob violence, and to refuse them the right of security given to others in these cities.

Also read: Malice in Wonderland: I Imagine a Tale for Independence Day

We gathered to voice our protest against authoritarian regimes the world over that are using the pandemic in order to increase militarisation and to stifle all political opposition by criminalising dissent. For all those in India supporting these acts, our message was: “Beware: The world is watching! 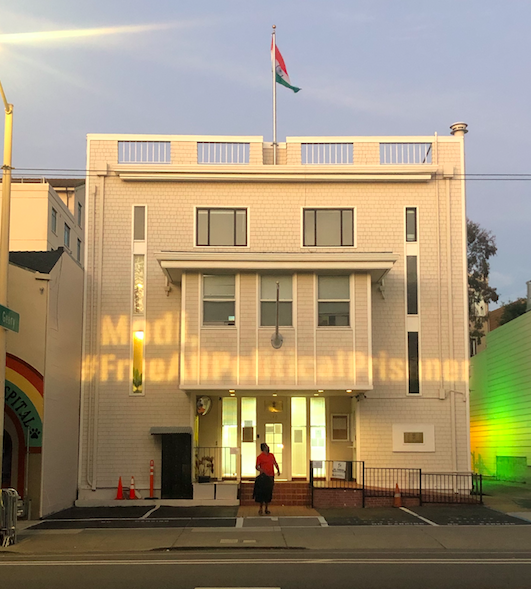 Several other cities in the US observed August 15.  The digital projection on the Indian Consulate building read “Modi #FreeAllPoliticalPrisonersNow”, a hashtag that was used the world over – in posters, videos and petitions. In New York, a digital truck in Times Square alternated between the message “Modi, Stop Arrests based on Lies” with the more hopeful rainbow-coloured message for keeping alive the dream of an India “that is equal and a nation that is free”.

A letter sent to the Consul General of India, New York, raised “out of love for the people of India” issues of  “human rights violations”, “communal disharmony” that threaten “the very secular identity of India”.

Boston held a protest, with social distancing, that spoke out “for political prisoners across the world”. We might be in different parts of the world, they asserted, but there is nothing that separates us when it comes to the justness or commonality of our cause. “From activists fighting for black lives here to those fighting communal propaganda abroad, we are in the same fight for liberation.”

Still in the US, the Polis Project, a research and journalism organisation, published a chilling report “Manufacturing Evidence: How the Police is Framing and Arresting Constitutional Rights Defenders in India”. Based on painstaking inputs and research from the ground, the report charged the Delhi Police with unleashing a reign of terror and intimidation against young Muslim activists with a view to creating a totally fictitious ‘conspiracy’ narrative that implicated them as instigators and aggressors rather than the victims of violence.

Worse, it accused the Delhi Police of “manufacturing false evidence using threats and intimidation” in interrogations of young Muslim working class men who had participated in the protests, so as to lay the ground for arresting “senior” constitutional and civil rights activists.

The report documented several instances of the police threatening young Muslims during questioning with dire consequences. “Tell us who all have you seen, or else we will lock you up also.”

At the press conference on August 14, that launched the Report, internationally-acclaimed writer Arundhati Roy described the current “totalitarian situation” in India in the following way. “No dissent is acceptable now. It’s like every pinhole of light has been blocked…students, lawyers, activists, the brains of this country are moving into the prisons.” Making a powerful contrast between the US and India, academic Arjun Sethi who teaches at the laws schools of Georgetown and Vanderbilt University said, “The officer who killed George Floyd was charged within four days. None of the police who committed the atrocities that day against those Muslim men has been charged and one of those Muslim men has died from his injuries.”

Across the Atlantic from the US to the UK and all the way to Australia, groups joined hands to create #FreedomFromFascism, a short film based on photos, posters and videos sent by from all over the world.

In the UK an opinion piece by faculty members of the Institute of Development Studies published on its website on the eve of Independence Day, appealed to the international community to put pressure on the Indian government. “We cannot stand by any longer and let such gross injustice occur in the world’s largest democracy.”

South Africa made powerful connections between the struggle they have waged  with what is happening in India today. “As South Africans, we know the pain of state persecution very well,” they wrote in an open letter to their International Affairs Minister Naledi Pandor.

“Post-apartheid South Africa’s ethos and constitution demand that we raise our voice and call upon India (our BRICS partner) to respect dissent, desist from using repressive laws, and sacrifice its citizens’ lives to the altar of Hindu supremacist ideology and police excesses.”

Drawing attention to UAPA in a radio interview a representative of People Against Apartheid and Fascism said that Indian government is using this law “like the apartheid government used to use the antiterrorism legislation during the state of emergency, during apartheid, to suppress all forms of dissent that is appropriate and correct.”

An article by the historian Anandaroop Sen who teaches at Cape Town University took us further back to locate UAPA in history. “The British colonial state in India with its paranoia over a Communist takeover at a peak in the 1920s crafted a series of “conspiracy” cases to arrest leaders of trade union movement.” 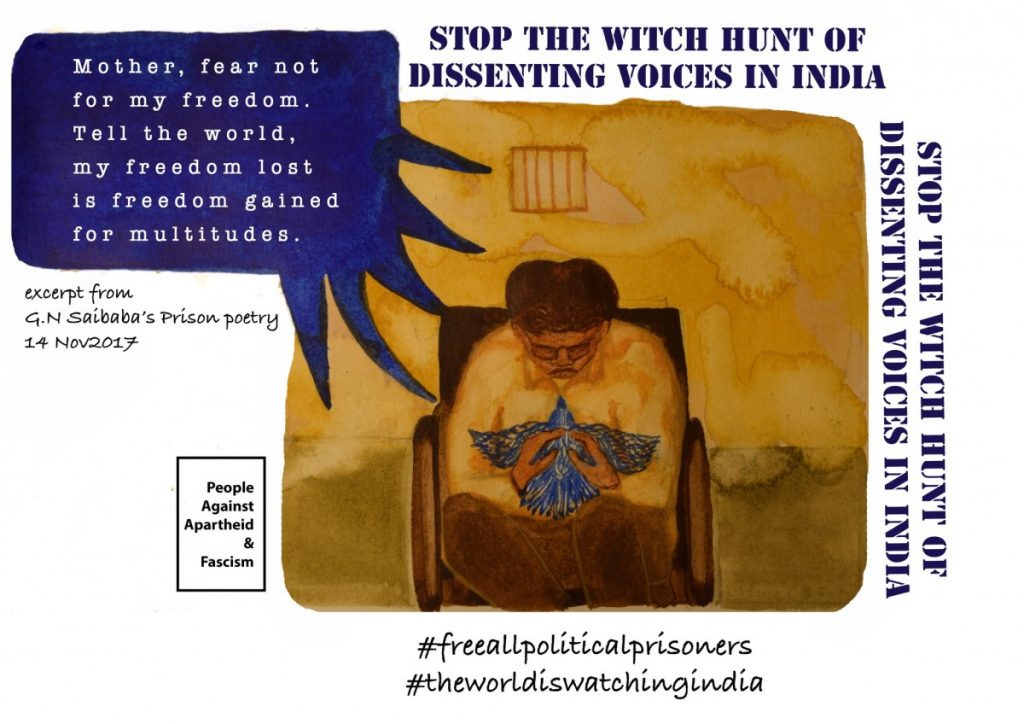 In a powerful poster, South Africa offered its solidarity with professor G.N. Saibaba, whose imprisonment since 2017 continues during the COVID-19 pandemic despite his 90% disability. Attention to COVID-19 in the context of the more recent arrests in Delhi was also drawn in the open letter by UK’s academics, activists and artists’ in which they wrote – “In addition to its incompetence in dealing with the pandemic, the BJP led government has demonstrated its trademark cruelty in incarcerating activists and exposing them to India’s unsanitary jails, which are breeding grounds for disease. Several activists have already caught the virus.”

Moving further East on the globe the Malaysia based International Women’s Rights Action Watch (IWRAW) Asia Pacific issued a statement which reminds the Indian government as to how its actions violate International Human Rights agreements to which it is party, in particular CEDAW (Convention on the Elimination of All Forms of Discrimination Against Women.)

Last but not the least, down under in Australia, The Humanism Project issued messages of solidarity including a short video which, while appealing for the release of activists and students, reminded the Indian government that, “Being critical of the government, asking questions from the government, is essential for any democracy.”

Chandan Reddy is a member of the group, South Asians Building Accountability and Healing (SABAH), Seattle.