The NRC Process and the Spectre of Statelessness in India

Citizenship and statelessness are inseparable twins. The division between citizens and the stateless is of critical importance in the production of the national space.

File photo of people in queue presenting their documents for the NRC update process. Photo: PTI

As the game of citizenship acquires a larger hold over the power dynamic, the growth of statelessness in South Asia also becomes more pronounced. Bharatiya Janata Party (BJP) president Amit Shah has threatened the nation that each and every ‘infiltrator’ – by which he probably means illegal immigrant (or a person considered legal for many years now being viewed as illegal) – would be expelled from the country.

At the time the Calcutta Research Group conducted a study on the state of Rohingya in South Asia, we had realised – though somewhat inadequately – that we were scripting a narrative of statelessness not in neighbouring Myanmar but in our own country. We were  reluctant to compare the genesis of the Rohingya question in Myanmar with the current citizenship registration drive in Assam in the wake of preparing a National Register of Citizens (NRC). The exercise rendered a massive number of ‘illegal immigrants’ – about four million – stateless.

While the statelessness of the Rohingya is now known, the possibility of statelessness in the Indian northeast through disqualification via NRC is little known outside the country. The final NRC draft, a court-sanctioned process, was published on July 30 this year. The updating process was marred by controversies over what was considered arbitrary verification procedures and the enforcement of extremely rigorous standards for the Bengali speaking population, in particular Bengali-speaking Muslims. Many of them, immigrants from East Pakistan/Bangladesh, had settled there for several decades. Disowned by India and without ties to any other country, a significant number of those excluded from the NRC are thus likely to be rendered stateless.

This has created a precarious situation involving protracted detention of those branded as ‘foreigners’. Detention facilities are being expanded for a large number of marginalised and disenfranchised people with no access to effective legal aid and constitutional guarantees. Biometric identification is being energetically pursued to detect ‘suspect’ foreigners, as was evident in the recent repatriation of a group of Rohingyas and sharing of the data with the Myanmar government. While India has not signed the two key instruments on statelessness – the 1954 UN Convention on the Status of Stateless Persons and the 1961 Convention on the Reduction of Statelessness, the NRC process has serious implications in terms of international human right laws.

Seven Rohingya men to be deported sit as Indian and Myanmar security officials exchange documents before their deportation on India-Myanmar border at Moreh in the northeastern state of Manipur, on October 4. Credit: Reuters

The idea of comparing the two contexts to see if there is a pattern in the spread of statelessness in postcolonial regions emerges from the contemporary emphasis on citizenship policies in these countries. Some citizenship markers in many postcolonial countries, including India, are: ethnicity, immigration, shift in emphasis from jus soli to jus sanguinis, growth of a regional informal labour market characterised by immigrant labour economies, borderland populations and the no-where people, historically structured population flows across postcolonial border formations and boundary delimitations, and finally the desire of rulers to achieve a perfect fit between the ‘right’ kind of population and the ‘right size’ of territory. These markers are considered ‘necessary’ to make a nation-state.

Citizenship and statelessness have never been so linked as they are today. Add to that, protracted displacement leading to statelessness. Once again, South Asia bears witness to such a situation; for instance, consider the case of protracted displacement of the South Bhutanese Nepali-speaking population now in Nepal, or the Chins in northeast India.

The international legal understanding of statelessness, even while taking into account de facto statelessness, is inadequate in theorising this growing phenomenon. It may be argued that the Geneva-based wisdom has been dominated by Western experience. We now have several accounts – of the Rohingya or the growing stateless population in the Northeast – to draw attention to a postcolonial perspective of statelessness.

Statelessness in India today also has a broader perspective: The accounts of statelessness of minor, ignored, subjugated histories of discriminated population groups, borders, and informal labour markets across borderlands, and the untold origins of post-colonial citizenship. If the preceding century was a century of partitions, this century may well become known as the century of stateless people.

The elusive search for original documents

The original documents needed to prove citizenship under the NRC are ironically called the ‘legacy papers’ (related to 1951). The logic is circular, the assumption being that you can claim citizenship only if you have legacy papers. The absence of one document or another, therefore, casts a shadow on the legitimacy of the person’s claim. Even if the same documents pertaining to the period from the 1951 NRC to the electoral rolls of March 1971 are re-submitted, they must be investigated to establish ‘genuine’ citizenship.

In the legal game of citizenship, the onus to prove citizenship is on the residents or the state. Thus, Prateek Hajela, state NRC co-ordinator, blithely says that those who do not find their names in the final draft can approach their respective NRC Seva Kendras (NSK), and get to know the reason/s for exclusion, and obtain an application form to file claims. Those left out can approach the NSK claiming that a proper examination of their documents was not done, and can bring fresh evidence, either documentary or from other members of the family. Yet, for women, it is difficult to catch this lifeline – if it can be considered so – because many of the excluded who are women are primarily married women who had submitted gaon panchayat certificates as a link document to prove their legacy to their original village, and those were rejected. The women have nothing now to corroborate those certificates since the village headmen did not have proper records and registers. Many more in the watery lands of Assam do not have any record of land holding and residence. The net result is that a huge number of people belonging to four categories – (a) D (doubtful)-voters, (b) descendants of D voters, (c) people whose reference cases are pending at the Foreigners’ Tribunals, and (d) descendants of these persons – are kept on ‘hold’. The circularity of the logic is clear: if you are a doubtful voter, you are not a citizen, and you are not a citizen because you are a doubtful voter.

Yet, this is not a novel situation. Even when the Indian constitution was being drafted, the search for ‘original’ documents was an exasperating one. The Constituent Assembly Secretariat (CAS) was asked how to treat pavement dwellers, vagrants from other areas, and others with no papers of residence or land ownership or settlement certificate. From Assam itself, we only know one side of history, and that is the side of landed proprietors. Their views were documented in the letters of enquiry and desperate messages seeking assurance of protection that reached the CAS. There were letters of enquiry about residents coming from other states and settled elsewhere, as in the Travancore state, or about foreign-returned soldiers – those without proper paperwork. The Assam Citizens’ Association, Dhubri, had referred then, as the West Bengal government despairingly says now, that people had the freedom to reside and settle anywhere in the country and the freedom to hold or dispose of property. At that time, too, papers were not always found in order while states were in actual charge of enrolling citizens, and they demanded ‘proofs’. 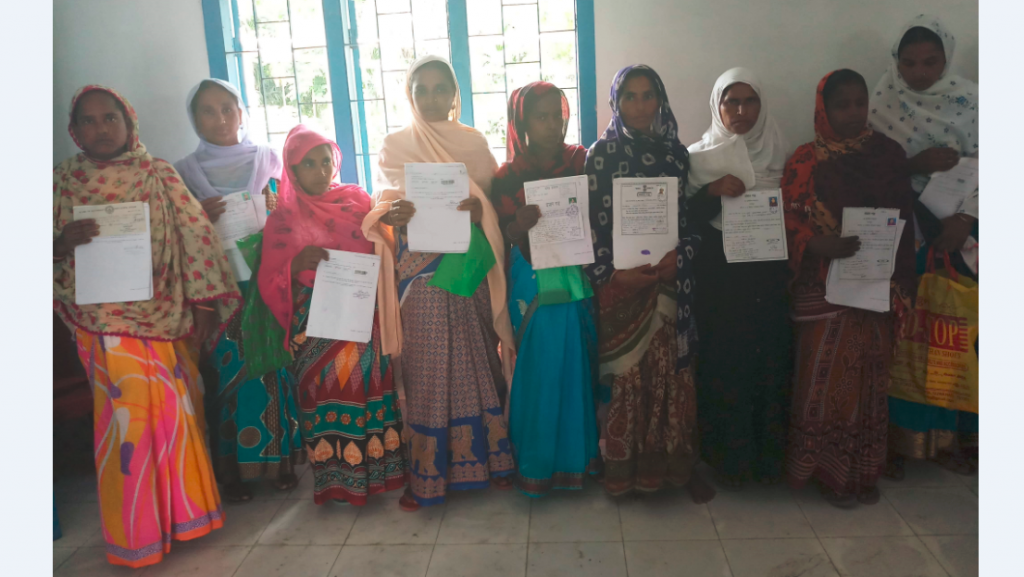 These married women from Hatishala and Bhalukabari villages of Kamrup Rural district have submitted only a Gaon Burah certificate to prove their citizenship. It is not a valid document. Credit: Sangeeta Barooah

Citizens struggled to get place in the roll (primarily the electoral roll), while not having a place there meant they were not citizens. Typical of such struggles was the efforts by the Assam Citizens’ Association, Dhubri, for citizenship and voting rights of the refugees. The genealogy of Article 13 of the Indian constitution still remains hidden from the public eye; a thorough examination of that genealogy is essential to make sense of the game of citizenship today.

A house for citizens?

The division between citizens and the stateless is thus of critical importance in the production of the national space. The national space emerges always as one of two kinds – either that of an inside, which is to say a house for citizens, or an outside, which is to say an anomalous space of outsiders. The game thus either interiorises or exteriorises the national space. This association of interiority with nation, life, security and development permeates not just classical theories of citizenship but our political life as a whole.

As I indicated through some references to the CAS debates, an archaeology of the intimate, that is “we the nation, we the citizens”, will require excavating the origins and forms, both real and imaginary, of citizenship. In this historical time of citizenship in post-Independent India, leading up to this moment when biometric details of refugees will be handed over to other governments, we are ‘ensuring’ our security in the world.

An equally critical division of images of the inside and the outside accompanies the critical division of the national space. The imagination of the Rohingya as a terrorist, or of a landless Muslim peasant living on the chars of Assam as a fundamentalist, or of a Bihari or a Bengali living in Ahmedabad, Mumbai, or Jaipur as a suspect criminal, always seizes the space of the nation, producing this division. This delineates the difference between the interior and the exterior. The deployment of images, as evident from the utterances of a variety of figures ranging from Amit Shah, Tarun Gogoi, Prafulla Mahanta, the current Assam chief minister Sarbananda Sonowal, to a Left-regional nationalist like Hiren Gohain, arises from a revulsion towards an imagination of a mixed life. Thus, doing away with the absolute binary of citizenship and statelessness requires doing away with our dependence on the image of a delineated interior space for its security and growth.

Michel Foucault called for thinking of ‘other spaces’ which are beyond the inside/outside, beyond our comfort zone, that require continuous formation through entering into relations with new forces from the outside. To Foucault, the ship was the space of such imagination par excellence. The ship protected us from an outside which would otherwise swallow us while at the same time delivering us to outside spaces which together constituted the voyage.

It seems that the East, with Bengal and Bihar, hated, ridiculed and deprecated by the so-called mainstream nation for having no sense of order, discipline, and national loyalty, along with the ideational and political struggles in Assam, will now be at the forefront of this struggle for practising the imagination of ‘other spaces’ by fighting images of a revanchist space. It is in its trait of creating the image of an anarchic space for all, partly by populist imagination of an ‘other space’, which will give this part of the nation its symbolic value. Remember, the madman aboard the ship of fools was placed on the inside of an outside as much as he was on the outside of an inside. Bengal, Bihar, and slowly the Northeast – yes, the Northeast – will for quite some years to come be occupying the liminal space.