The Forgotten 'NRC' in Bhutan

The process that led to the expulsion of tens of thousands of Nepali origin people from Bhutan in 1991-92 had lessons India would have done well to take. 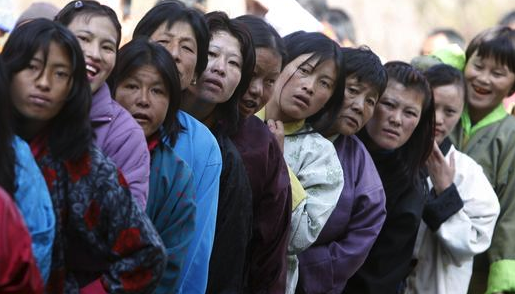 File image of voters standing outside a polling station to cast their ballot in Thimpu, Bhutan in 2008. Photo: Reuters/Desmond Boylan

The National Register of Citizens (NRC) process that has just concluded in Assam is not new to the annals of South Asia. Despite key differences, it replicates very closely the process that led to the expulsion of tens of thousands of people of Nepali origin from Bhutan in 1991-92.

Unlike most countries in South Asia, Bhutan escaped British rule, with the father of the first King of the Wangchuck dynasty, Jigme Namgyal, leading the war against the British in 1864-65. While it is hard to confer victory on either party, the tenacity with which the Bhutanese fought for their sovereign rights led to a very different outcome than what happened in neighbouring Sikkim, the other Himalayan Buddhist kingdom in the region.

As a result Bhutan did not see the modernisation that the British brought to the region, often on the back of poor Nepali and Bengali labour, and enforcing a forced mixing of populations that has left fissures between communities that were seen as “newcomers”, even though they have lived in the region for generations.

Also read: How Bhutan Came to Not Be a Part of India

This is not to say that Bhutan was entirely insulated. The founder of Bhutan as a state himself, the Zhabdrung Ngawang Namgyal, arrived in Bhutan from neighbouring Tibet in the 17th century. Landowning families of Nepali origin would be present in the Bhutanese court, not least the Pradhan family who would produce people like J.B. Pradhan, the district commissioner of Southern Bhutan (a governor, with massive power) under the Third King, or Om Pradhan, who would go on to serve as Bhutan’s foreign minister.

What Bhutan did not have, though, was a large labour class, dependent as it was on (largely) subsistence farming. It governed in a feudal manner. This changed in the 1950s. The third king, Jigme Dorji Wangchuck, ascended to the throne in 1952. He is often referred to as the creator of modern Bhutan. He abolished serfdom in 1953, broke down large landed estates, and in 1958, settled landless populations by granting them land. These land grants and the certificates granting them, would become proof of citizenship, something that would go on to haunt many families of Nepali origin in later decades. 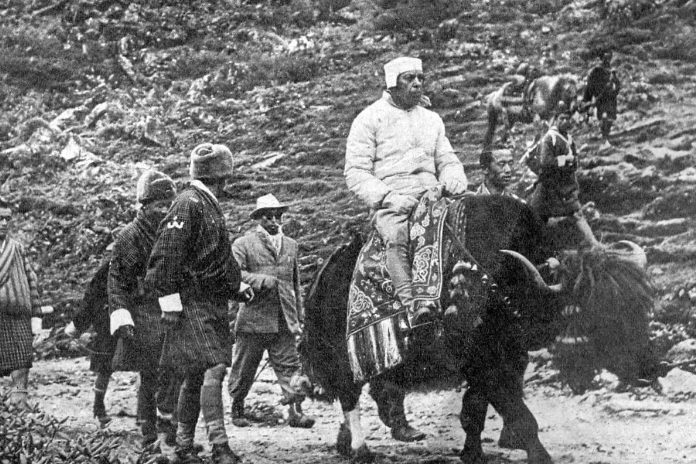 Nehru on a yak during his Bhutan trip of 1958. Photo: inc.in

Another thing had happened in 1958. Indian prime minister Jawaharlal Nehru, accompanied by Indira Gandhi, made the long and arduous trek to Bhutan. The trip would mark the beginning of a long and close diplomatic relationship between the two countries, a part of which was Indian funding of Bhutan’s Five Year Plans.

These allowed Bhutan to build modern infrastructure. The problem was a lack of enough labour. Bhutan has a tiny population, and building large roads in the mountains is a massive enterprise.

While many Bhutanese participated in this exercise (the mother of the second elected prime minister, Tshering Tobgay, was one), more was needed. The dynamic Bhutanese prime minister, Jigme Palden Dorji, was put in charge of recruiting labour for this enterprise, much of which came from Nepal, or from Nepali origin communities, nearly five million of whom live along the borders of Nepal.

In 1959, the Bhutanese National Assembly passed the National Law of Bhutan, and in 1959 the King imposed a ban on open immigration, although there was still a formal process for applying for citizenship of people who entered after that, or had been resident for a decade in Bhutan.

These laws, though, were not rigorously enforced, and in the mountainous territories of Bhutan with limited infrastructure, were hard to monitor. Moreover, documentation is not a primary concern for agrarian communities. They paid their taxes to the local administration, and felt they were doing enough. 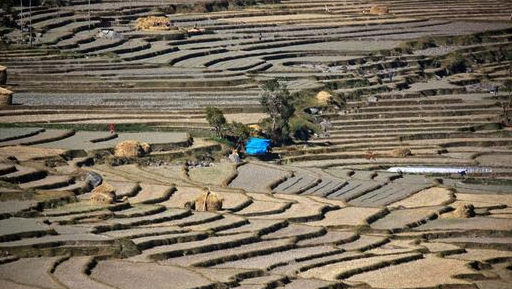 By the 1980s things had changed dramatically. Nepal tightened its border controls, requiring documentation, partially succumbing to longstanding paranoia that the Kathmandu elite had had over Nepalese of the lower hill regions, the madhesis, who they feared were closer to India than Nepal.

Then came the incorporation of Sikkim into India by ballot. This was supported by a large population of Nepali origin people who outnumbered the Bhutia community.

A third factor was an intense, internal, issue with Tibetan refugees who were living in Bhutan, which led to the expulsion of almost all of them in 1979.

The last two reasons led to Bhutan starting an enumeration process in 1985, to determine legal residents and those without legal documents. Initially the process was not necessarily seen as one that could give birth to a conflict, with no push towards expulsion. In October 1990 the home minister of Bhutan, Dago Tshering, said, “We were not planning to throw out anybody. We wanted to issue identity cards — red ones to the genuine residents, who were here before 1958, and green ones to later immigrants. The green ID, modelled on the Green Card of the US, gives all rights to the residents, except the right to vote and the right to apply for foreign scholarship.”

Nevertheless, by 1992, there were 70,000 people living in refugee camps in Nepal after a sequence of brutal confrontations between the Bhutanese state administration and violent activist organisation largely living in areas outside the borders of Bhutan, as documented by the Amnesty International report published in 1992. The people caught in the middle were poor agrarian communities of Nepali origin, many of whom fled out of fear. 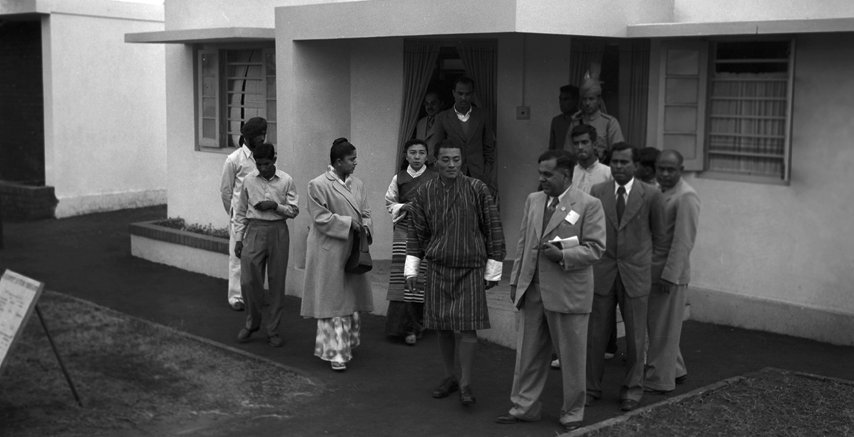 It is worth noting that not all fled. The Nepali origin community in Bhutan is now over two hundred thousand. As Alexander Casella, who was the director for Asia at the UN High Commission for Refugees at the time, has written, many actually did not have the required paperwork. A Joint Verification Team (JVT) comprising an equal number of Nepali and Bhutanese ministers instituted in 2001 vetted the paperwork of 12,183 refugees from the Khudanabari refugee camp.

In May 2003, the results showed that 97% could not provide the required paperwork, leading to a near-riot, and an end to any process of repatriation.

This process, in many ways far more conciliatory than the NRC process in Assam – because it did not begin with the idea of expulsion, and clearly offered both paths to citizenship as well as the right to remain and work – still ended in disaster. The racist and derogatory emotions displayed were terrible, and continue to emerge from time to time. The refugees have largely been absorbed by foreign countries, primarily the United States.

A tragedy is defined not when wrong and right conflict, but when two visions of the right do so. Having clear documentation is not a bad thing in itself, and frankly benefits those being called “infiltrators” and “foreigners” far more, if they can get it.

But in its enumeration process undertaken in the 1980s, Bhutan opened itself to a conflict that was probably the most dangerous in its history, creating a human disaster for which it will continue to pay a very large price. Sadly, it seems that India, who had to cut short the term of its Ambassador serving in Bhutan at the time, seems to have learned nothing, and has instituted another process which acts as punishment for the poor and marginalised.