The Edesmetta Inquiry, and Adivasis' Odyssey to Justice in Chhattisgarh

In their testimonies to the judicial commission looking into the Edesmetta encounter, Adivasis have attempted to deconstruct narratives given by the state.

There was that moment of epiphany in the room. Karam Manglu was being cross-examined at the commissioner’s office during the proceedings of the Justice V.K. Agrawal judicial commission inquiring into the Edesmetta encounter of May 17, 2013, in which eight Adivasis were gunned down in the Bijapur district of Chhattisgarh.

He was asked the age of his nephew Badru, who was among those killed, and chose to answer by raising his hand up to the level of his chest. A simple gesture to indicate the boy was a minor, and an admission that he, an Adivasi, does not keep count of age according to the Gregorian calendar. Yet this witness had just been subjected to intense scrutiny by counsels for the state of Chhattisgarh, the Central Reserve Police (CRPF) and the police, on whether he knew the exact date and year that the incident had occurred. They also asked for a detailed timeframe of his trip to the village of Matenar in 2017, where at a public meeting he learnt of the commission and expressed his desire to be a part of the process.

Another such moment occurred when Karam Somli, the mother of young Karam Masa, another minor killed, was quizzed by CRPF counsel Rajkumar Gupta about what time she left Matenar for Dantewada, where she affixed her thumbprint on her affidavit.

Asked the question through a Gondi interpreter, Karam Somli, her diminutive figure barely visible above the railing of the witness stand, remained silent but inclined her head towards what would be the position of the sun at 12 noon. This, again, was an eloquent assertion of how Adivasis often measure time – with the cycle of the sun – and of how difficult it was to answer subsequent technical questions such as how long it took to reach Dantewada.

The hearings on March 10 and 11, during which six villagers were cross-examined, were a revelatory exercise on the challenges Adivasis face in accessing and engaging with the judicial system, the hurdles posed by differences of language and culture, and their expectations of justice and long odyssey in search of it.

What happened on the night of May 17, 2013, in the remote hamlet of Edesmetta, where the said ‘encounter’ occurred? The villagers’ narrative can be pieced together through their affidavits, accounts recorded by activists and a report by the Human Rights Forum called ‘The Terrible Cost of an Inhuman Counter Insurgency‘.

Occurring about a year after the Sarkeguda incident in the same region, these killings took place on the night of the Beej Pandum, a ritual sowing festival just before the rains. Significantly, whilst the witnesses at the commission’s hearings could not recall the date and year of the incident, all of them categorically stated that the attack took place on this important festival day, before the rains started. As is customary, the women were at home. Male members of the families – men and young boys – perhaps around 80, gathered inside and outside the Gamam Mandir in an open field for a puja during which seeds and agricultural implements are blessed. There was singing and dancing, a bonfire had been lit, chicken had been slaughtered and preparations were on for the meal. Three men – Punem Sukku, Karam Budru and Karam Lakko – had gone to fetch water when they were surrounded and caught by CoBRA (Commando Battalion for Resolute Action) personnel, a special anti-Naxalite force of the CRPF, who were out on a combing operation. The three men managed to run away towards another hamlet, but Budru injured his arm.

Subsequently, according to the villagers, bursts of gunfire ripped through the dancing and celebrations. Men ran helter-skelter even as people fell to the ground dead. The women, who were awoken by commotion, ran towards the sounds. Seven villagers died that night: Karam Pandu (the pujari), Karam Somlu, Punem Somu and four minors – Karam Guddu, Punem Lakku, Karam Badru  and Karam Masa. CRPF constable Dev Prakash’s body was found next to that of Karam Masa. According to villagers, he died in the same burst of gunfire. It is said that after the firing stopped, Karam Jogga, who was grievously injured, was heard pleading for water, but died thereafter. The number of those died rose to eight after another villager succumbed to his injuries.

The constable’s body and that of Karam Masa were taken away by the forces to Gangalur police station, a journey that entails a two-hour walk over hillocks. Three villagers – Karam Aiytoo, Karam Mangu and Karam Lachchu – were also rounded up on the night of the incident, tied together and forcibly taken away. According to their affidavits, they were beaten severely and interrogated at the police station. When they complained of hunger they were given biscuits, but no water to drink. (During the commission hearings on March 11, Aiytoo affirmed, in a question raised by police counsel Sanjay Shukla, that he had been taken to the police station for interrogation and then fed biscuits. The question, however, made no reference to the beatings.) 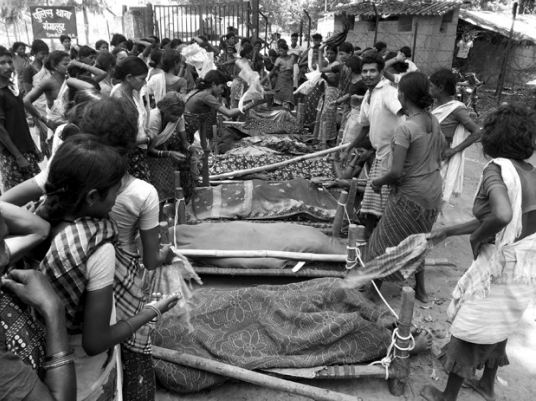 Those who had been injured in the attack were also taken away to the police station, where they were kept overnight and made to sleep on the floor. They were taken the next day to a hospital in Jagdalpur and given cash for medical treatment.

Back at the hamlet, the women, who had rushed to the firing spot, came upon bodies lying near the temple with visible marks of injuries. Punem Bori, a widow, in her affidavit states that she found her young son Punem Lakku with a bullet wound in the waist. The bullet had exited through the abdomen. The women carried the bodies – except that of Karam Masa, which had been taken by the police – back home.

The next evening, another contingent of CRPF personnel came to Edesmetta and insisted on taking the corpses away for a post mortem in the community health centre, Gangalur. Angry women and relatives followed the troops carrying their dead kin, also demanding demand the release of the three men in custody. Post mortems were conducted on May 19. The manner in which they were conducted is reflected in the affidavit of Karam Sukki, whose husband Pandu and son Guddu were both killed.

“The bodies had been ripped from the chest to the abdomen. I asked how can I take them back in this condition. I had bought thread for them to be sutured up but all they did was to tie the bodies in gamchas and return them to us.”

The enraged women then pelted stones at the Gangalur police station. The police filed an FIR stating that the deaths were caused because of an armed encounter between the security forces and Naxalites. It said that under hostile fire, the troops managed to kill one person (Karam Masa) and apprehend three suspects, and only the next day, on the discovery of more bodies, did they take them away for post mortem.

Media reports quoted ADG of police, Naxal operations R.K. Vij as saying that the villagers died because they were used as human shields by Naxalites.

But the villagers remained adamant that there was no exchange of fire that day.

The Chhatisgarh government announced an inquiry under retired high court judge V.K. Agarwal, who is also inquiring into the Sarkeguda incident.

During the cross-examination on March 10 and 11, the witnesses stated categorically that their village was not inhabited or visited by Naxals. During his lengthy questioning, Karam Lakko also denied the statement posited to him that Punem Soni, one of those killed, used to provide medicines and functioned as a medical aide in the village on behalf of Naxals.

Most of the questions were of a technical nature and appeared to insinuate that the villagers did not understand what had been written in the affidavits, that they were making tutored statements on being instigated by others. They were asked repeatedly whether they had earlier taken the initiative to go to a police station to file a complaint. Questions were also raised about whether they had taken the compensation of around Rs 1 lakh that had been declared by the state. Whilst those who were injured and hospitalised in Jagdalpur accepted the Rs 20,000 given for medical expenses, they refused to take the additional Rs 80,000 offered by the collector.

One of the wounded, Karam Dengal, in the earlier round of cross-examinations conducted on January 20, denied that he had refused the money because of pressure from Naxalites. He said, “We refused because it would appear as if we have sold men for money (Aadmi ko beche jaisa lagega, iss karan hum logon neh yeh rakam nahi liya).”

This sentiment was echoed by many others in their affidavits. They declared that it is justice they want.

It has been seen several times that because of the due to feelings of alienation, Adivasis of Bastar seldom approach the court for redressal in civil matters, preferring to settle things at the community level. They approach the police only when grave violation has taken place, at the hands of state agencies. In the case of Edesmetta, it was the wives and mothers of the victims who went to the thana to demand that the bodies be returned and the men held released.

The police also haven’t helped matters, as police stations in this region are often hostile to Adivasis, with barbed wire, high walls and checks by hostile staff.

Procedures in court are no less intimidating, where difficulties of language and culture pose serious challenges. Even with the best Gondi translators, there are several instances of misinterpretation, especially when the questions do not proceed in a systematic manner and there are injunctions like “Look in front”, “Speak louder” and so on that can be unnerving.

Then, as a legal activist explains, there is often power play at work and a total lack of sensitivity towards the Adivasis’ unfamiliarity with court practices. A lawyer revealed how one day in a court, an Adivasi was asked to fix his thumbprint on a testimony. He refused because of his mistrust of officialdom. The judge, instead of explaining legal practices, was infuriated and said that he would send him to the lock up, in total contempt of the law. He kept asking him, “Do you know who I am?”

For Adivasis to actually prosecute the state for crimes such as rape or murder is comes with a number of hurdles. But what about their engagement with commissions of inquiry? Do Adivasis, perhaps, seek an acknowledgment of the grievous violence done to them? It is a matter of seizing an opportunity to be heard even as the state and most of the media constructs its own distorted narratives, one lawyer suggested.

More importantly, for Adivasis in Chhattisgarh, it is not about which soldier or officer pulled the trigger, or which particular battalion of the CRPF or police was involved, but about systemic violence they face. Their long odyssey for justice will be a reflection of the nature of the relationship between a state and its people.