The Coronapocalypse and Sanitation Workers in India

Working without PPEs and even soap and water, the people who keep our surroundings sanitised are vulnerable to infection themselves. 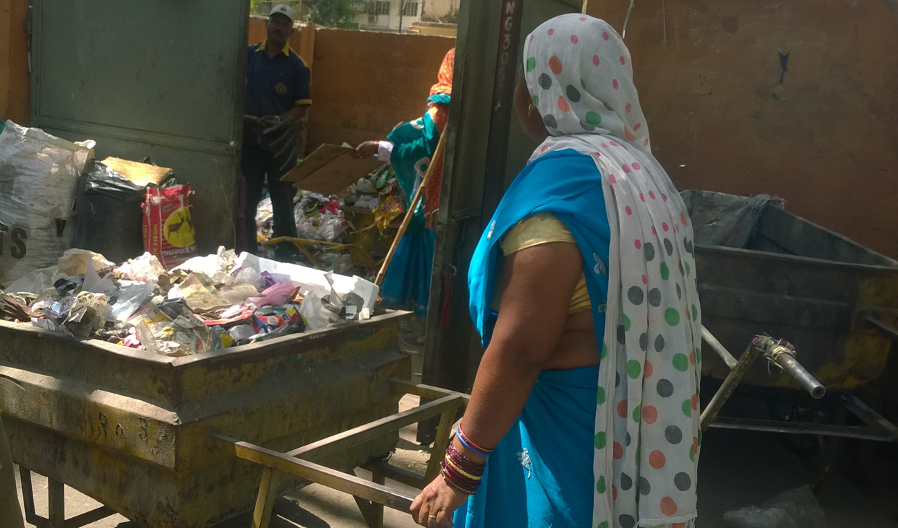 In India, positive cases of COVID-19 have been increasing rapidly in India since the first outbreak was reported in Kerala on January 30. The pandemic put the country under a prolonged lockdown from March 25.

During this lockdown, some specific groups of people – doctors, nurses, health workers, police personnel, security staff, sanitation workers and so on – have been working round the clock to save our lives. Of these groups, the one group that rarely receives appreciation for their service is the sanitation workers.

The sanitation workers are mostly from the marginalised sections of the society; they are Dalits often forced into this occupation because of their caste.

Compared to other groups who are at work during the lockdown, the sanitation workers are the most vulnerable because they come in direct contact with several kinds of wastes, including liquid waste, solid waste, organic waste (garbage), hazardous waste, and so on.

Not only do the sanitation workers deal with the cleaning and disposal of wastes from our living premises, they also have to deal with the cleaning and disposal of medical wastes. During this pandemic, direct contact with the waste makes them more prone to the corona virus and they may infect their family members as well. A few sanitation workers are already reported to have tested positive for COVID-19. In East Delhi, the death of a woman sanitation worker was reported on April 22. She was suspected to have contracted the coronavirus.

The guidelines of the Ministry of Health and Family Welfare (MoHFW) recommend that sanitation workers use personal protective equipment (PPE) such as N-95 face masks, gloves, coats, boots, sanitisers and so on. But have the sanitation workers who work under the municipal corporations been provided with adequate safety measures against COVID-19? Are they using PPEs provided by the municipalities?

Facts reported from the ground have not shown an affirmative response to these questions.

In Maharashtra, the state with the highest number of COVID-19 cases, sanitation workers from Mumbai reported that they had not received any PPEs from the authorities. Meanwhile, in central Delhi, sanitation workers who work in hospitals are particularly apprehensive about their health as they clean COVID-19 related medical waste such as discarded face masks, used gloves, etc., without adequate protective gear. Whenever they ask for PPEs, the authorities tell them “there aren’t enough.” But despite the risk of contracting COVID-19, the workers say they have no choice. No other jobs are available to them.

On April 16, a television report by India Today showed the ground reality of sanitation workers in states like Bihar, Haryana and Madhya Pradesh. The workers lacked basic protective gear but continued to work. They urged the government to provide the gear because they are aware of possible infection, given that their work brings them in close contact with corona virus-infected people.

To help address the shortage of face masks for sanitation workers, an urban women’s self-help group in Telangana is stitching masks for the Khammam Municipal Corporation. However, according to the guidelines of the MoHFW, these masks are inadequate against the corona virus.

Abandoned by the state

Reports from states like Andhra Pradesh, Odisha and Gujarat highlight how the sanitation workers deal with the waste directly without protective gear. For instance, in Gajapati district of Odisha, the workers use plastic bags instead of gloves to clean and dispose of waste material.

Apart from the PPE, it is shocking to know that the men and women involved in sanitation and scavenging work are not even provided sanitisers, soap and water at the workplace. A television report showed that sanitation workers get one bar of soap a year from a Municipal Corporation in Maharashtra. Is that enough for people who are always in direct contact with waste material?

To fight COVID-19, the World Health Organisation (WHO) and other health organisations have instructed everyone to clean their hands with soap or a sanitiser. Yet sanitation workers are not provided with safety measures. How will they fight the novel corona virus when they lack even the minimum safety equipment?

Thus sanitation workers are more prone to COVID-19 and in this pandemic, they are scared. Nevertheless, they are compelled to take up this occupation. According to the Socio-Economic and Caste Census 2011, 1,82,505  households in rural areas reported themselves as manual scavengers or sanitation workers and this figure would be elevated substantially if we identified the households engaged in manual scavenging in urban areas.

Almost all the sanitation workers are poor and vulnerable, relying on undignified work for their survival. They are so tightly bound to sanitation work that if they leave it, they will die from starvation.

The need of the minute

The government and local authorities should pay serious attention to the issues of manual scavengers and sanitation workers during the pandemic. The people who work round the clock to clean and sanitise our neighbourhoods and cities must be provided with adequate PPE and other safety measures. They should be paid their full salaries on time. Recent reports show that vulnerable sanitation workers in Nagpur, Maharashtra have had their salaries cut.

In addition, the government should ensure free medical and transportation facilities to those who are risking their lives to keep us protected from the novel corona virus and the local authority should ensure the availability of water at their work places so they can sanitise themselves before returning home.

Unless these sanitation workers are protected against the coronavirus, they may infect their families and eventually other people in their locality.

Despite their service to the country, sanitation workers are never recognised and appreciated for their work. In this pandemic, the governments at the centre and state must do the sanitation workers justice or a day will come when we might not find a single individual to clean our cities and villages because they have succumbed to the corona virus.