“Torture was now not only an integral part of policing culture, in terror offences it is a centrepiece,” said former Law Commission chairman A.P. Shah, at a meet recently. 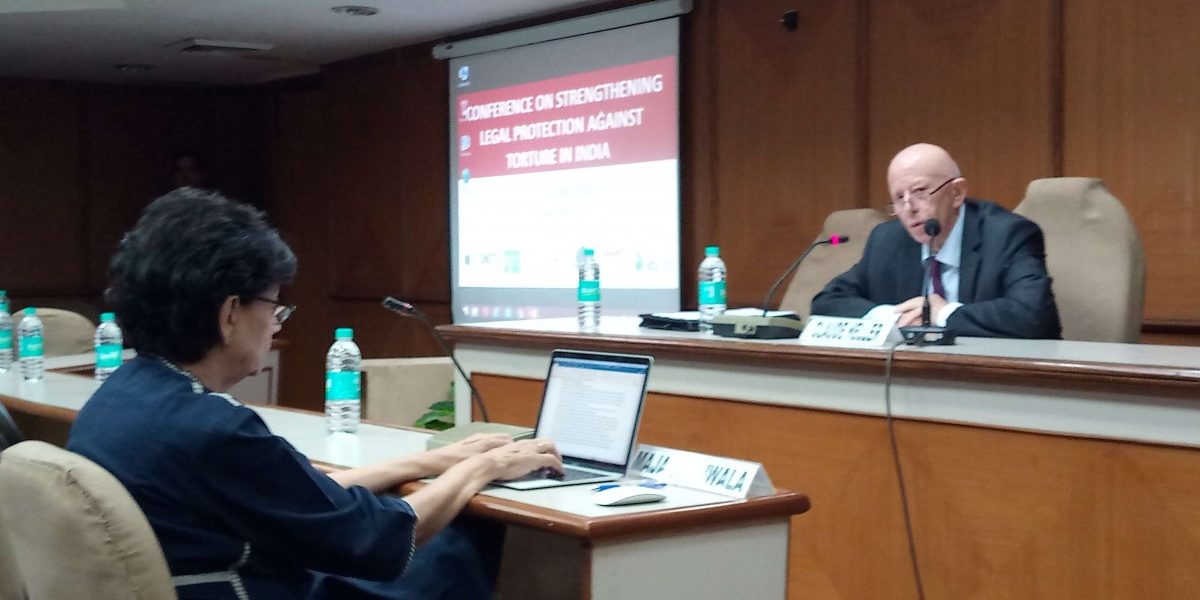 Vice-president of the UN Committee against Torture, Claude Heller, speaking about how torture has become a part of state strategy since 9/11.

New Delhi: Through a number of testimonies of men who, before their acquittal in cases of terror, arms haul or of being involved in Left Wing Extremism (LWE), were tortured extensively by the police and investigation agencies and by recalling data put out by the National Human Rights Commission that over 4,000 cases of custodial death had taken place in 2015-16 alone, the conference on “Strengthening Legal Protection Against Torture in India” last week made a strong pitch for India to criminalise torture and to ratify the Convention against Torture and Other Cruel, Inhuman or Degrading Treatment or Punishment (UNCAT) which it had signed in 1997.

Organised by the Commonwealth Human Rights Initiative (CHRI) in collaboration with National Law University of Law, Delhi, World Organisation against Torture (OMCT), People’s Watch, Quill Foundation and the International Commission of Jurists, the two-day event also discussed at length how under the Indian domestic legal framework, torture – as defined in Article 1 of the UNCAT – is not yet criminalised.

It was also highlighted that while there were numerous testimonies of torture in both police and judicial custody, and thousands of custodial deaths are reported each year, during the Universal Periodic Review (UPR) session of India at Geneva in May 2017, the then Attorney General of India Mukul Rohatgi had declared that “the concept of torture is completely alien to our culture and it has no place in the governance of the nation”.

The conference, however, claimed that testimonies of victims of torture were enough to belie this claim. Right in the beginning, testimonies of three such victims, who had been acquitted by courts, were shown through audio-visual presentations.

One of these victims was Wahid Shaikh, an accused in the 7/11 or July 11, 2006 Mumbai train blasts case. Shaikh spoke about how the intensity of torture had gradually increased as he was abused, his religion was spoken ill of, he was beaten, kept naked, his legs were split wide and he was water-boarded and given electric shocks. All this, he said, to make him sign some confessional statements.

Similarly, Bandu Mashram, who was an accused in the Chandrapur Maoist case, said the police wanted him to confess that he was a Maoist sympathiser and so, under instructions from the Maharashtra police officer who was supervising the case, he used to be stripped and beaten. “I also brought this torture to the notice of the court, but no action was taken,” he said.

Firoz Deshmukh, an accused in the Aurangabad arms haul case, also testified about how he was made to walk on torn pieces of the Quran to break his spirit. He also mentioned how he knew of others who had been given electric shocks in their private parts.

In his address, vice-president of the UN Committee against Torture, Claude Heller, spoke about how 9/11 represented the point of setback for human rights across the globe as the US set about avenging the bombings in New York and elsewhere. He said the Bush administration accepted that torture could be used against Taliban and others in the supposed ‘fight against terror’ and that “privatisation of torture” was also subsequently seen in Iraq.

Heller said in the fight against terrorism, torture thus became a part of strategy. However, he noted that “this has challenged in the democratic states the rule of law” especially in the context of deplorable condition of detention, harassment of journalists and human rights activists and abuse of migrants and refugees.

“The consolidation of human rights is a long, complex process. It raises questions of implementation and of standards of each country throughout the world… The gap between the treaties, laws and the reality is very wide. The main challenge we face in each country is precisely this – how to implement in reality the treaties they have signed,” said Keller, demanding affirmative action in these matters. 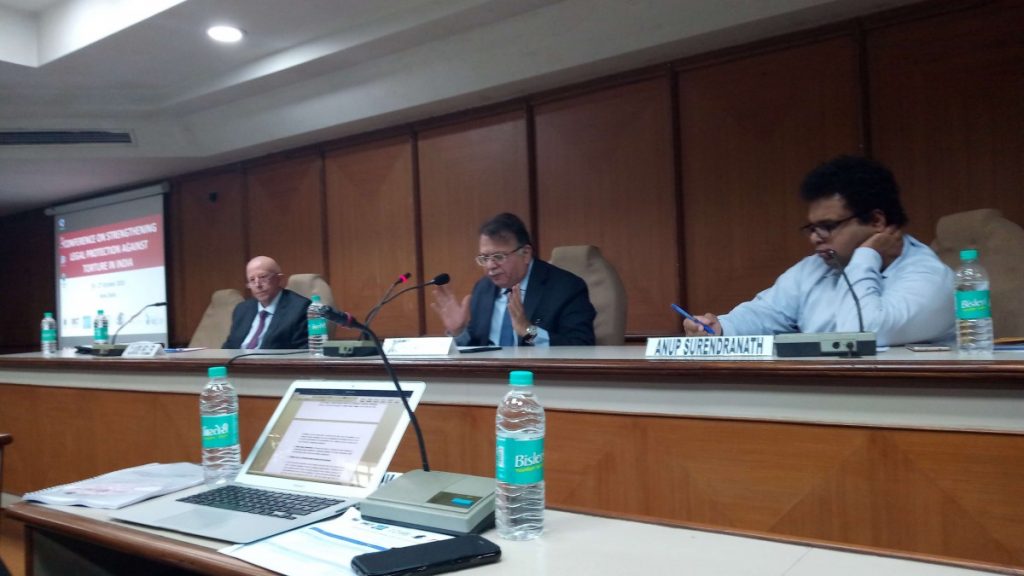 Former chairperson of Law Commission of India, Justice (Retd.) A.P. Shah speaking about torture becoming a centrepiece in terror offence while addressing the conference on ‘Strengthening Legal Protection Against Torture in India’.

Former chairperson of the Law Commission of India, Justice (Retd.) A.P. Shah, spoke about how “torture was now not only an integral part of policing culture, in terror offences it is a centrepiece”.

Justice Shah said the law has been designed this way and therefore police torture is endemic in India. He lamented that “some judges are convinced that without torture, evidence gathering and subsequent conviction is not possible. This acceptance of torture in India is an open secret.. As part of this, any such treatment meted out to certain communities is accepted as par for the course for justice and safety of the country.”

The jurist-cum-rights activist said the issue of torture is not connected to police reforms alone as more people die in judicial custody than in police custody. He said the Supreme Court had told the subordinate judiciary to regularly visit and inspect prisons under their jurisdiction but that has not happened. Also, to a question on routine medical examination of inmates so that they do not undergo torture, he wondered how we would be able to prevent torture in which there are no obvious injury marks on the body.

The meet also dwelt on the weaknesses of the  Law Commission of India report on ‘Implementation of ‘United Nations Convention Against Torture and other Cruel, Inhuman, and Degrading Treatment or Punishment’ through legislation’, which was submitted to the Ministry of Law and Justice in October 2017. This report was submitted upon the insistence of the Supreme Court and while it was hearing a case related to torture in a death sentence.

This draft Prevention of Torture Bill, 2017 had recommended stringent punishments for torture, including imprisonment up to 10 years and fine. In case the torture led to death, the punishment was recommended to be death or life imprisonment in addition to fine.

Senior Supreme Court advocate Vrinda Grover said with Muslims and Dalits bearing the brunt of torture it needs to be asked what is the purpose for which torture is done. She said there was a “systemic and systematic abuse” of the communities and with “majoritarian viewpoints gaining ground around us” torture had become widespread. She said the draft Prevention of Torture Bill 2017 had its roots in the parliamentary Select Committee recommendations.

Noting how the Central Information Commission had blocked her attempts to gather information on how the Ministry of Home Affairs was approaching the issue, she said “even to see what was the fate of the Bill and the file notings is not easy.”

Likewise, Grover observed that just the way the Federal Court under the British had acquitted a police officer of kicking a boy on the ground that he was only performing his duty, so has the Supreme Court of India in different judgments exonerated officers in cases where victims had died while being chased by cops. In one case, she said, a boy drowned while in another, one who had fallen into a well was killed with a stone by the cops. Yet, the court held that the officers were only discharging their duty.

Grover, who was also the counsel for Ishrat Jahan’s mother, said sanction has been sought for prosecuting three cops for the woman’s killing as it was CBI’s case that it was an extra-judicial killing and not a case of their performing official duty. “We have recently heard that the police officers arraigned for the murder of Ishrat Jahan have all officially sought sanction for prosecution from the state of Gujarat. This will eventually reach the Supreme Court and it will be interesting to see whether extra-judicial killings will be considered part of the official sanction of duty for policemen. And this question does not even touch extra-judicial killings in Kashmir or the North-East,” she said.

Stating that immunity for police personnel will not vanish immediately, Grover suggested that “like sexual violence, we should say torture cannot be part of official discharge of duty. Torture should constitute an exception to Section 197” of the Criminal Procedure Code under which prosecution sanction is required in certain conditions from the Central government or by the State government for taking cognisance of an offence by a criminal court against a judge, magistrate or public servant.