The Mumbai Press Club has issued a statement highlighting the Supreme Court's role, observing that citizens have the right to question court orders. 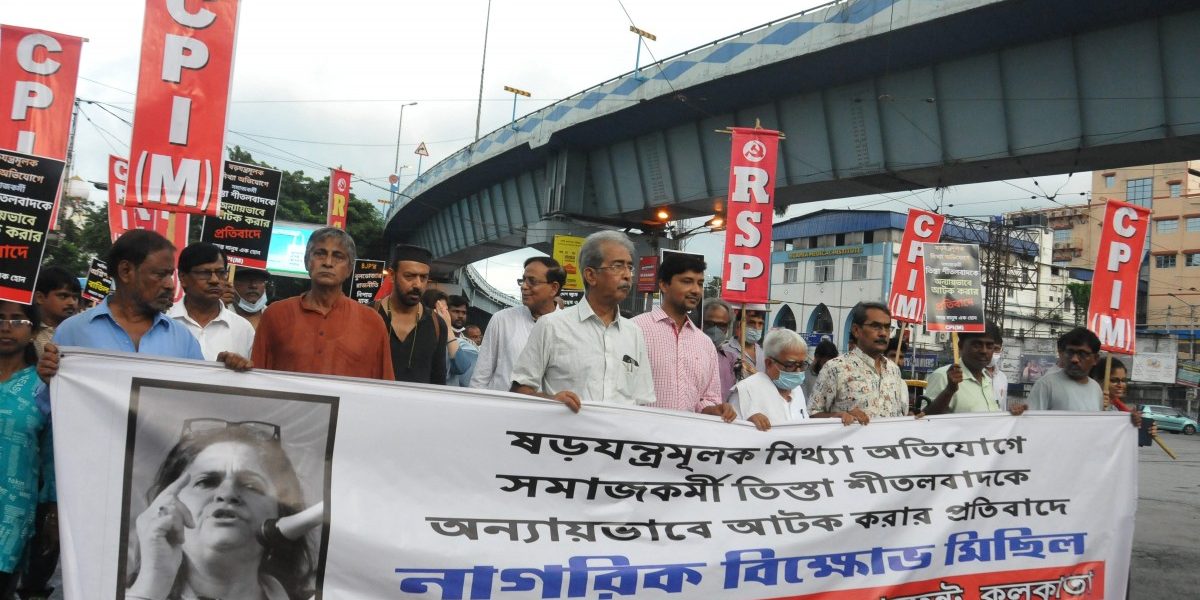 New Delhi: Mary Lawlor, the United Nation’s Special Rapporteur on Human Rights Defenders, has – among others – expressed deep concern over the detention of activist Teesta Setalvad, who was on Sunday sent to five days of judicial custody after having been accused of what authorities have claimed was a conspiracy to send innocent persons to jail over the 2002 riots in Gujarat.

Setalvad was arrested in June 25 by the anti-terrorism squad of Gujarat Police. In the aftermath of her arrest, Setalvad had apprehended a threat to her life and alleged that she was roughed up by the Gujarat Police.

Along with Setalvad, former Gujarat director-general of police S.B. Sreekumar, has also been arrested and sent to judicial custody.

Lawlor, in a tweet, said Setalvad “is a strong voice against hatred and discrimination.” She also noted that “defending human rights is not a crime.”

Deeply concerned by reports of #WHRD Teesta Setalvad being detained by Anti Terrorism Sqaud of Gujarat police. Teesta is a strong voice against hatred and discrimination. Defending human rights is not a crime. I call for her release and an end to persecution by #Indian state.

The Mumbai Press Club, in a statement, also condemned the arrest of Setalvad, noting that remarks by the Supreme Court bench against some “functionaries” who had “kept the pot boiling” had been used by Gujarat Police to make this arrest.

In a strong statement, the Press Club observed, additionally, that citizens have the right to question court orders.

An editorial on Indian Express expressed similar sentiments on the Supreme Court’s judgement, calling the outcome of the order “disquieting.”

“In the same order, however, the Court went a worrying step further. Its verdict said, and the FIR lodged the next day faithfully quoted: “At the end of the day, it appears to us that a coalesced effort of disgruntled officials of the state of Gujarat along with others was to create sensation …to keep the pot boiling, obviously for ulterior design… all those involved in such abuse of process, need to be in the dock and proceeded with in accordance with law”. The day after, the question is: Surely the court would not countenance a witch-hunt that borrows its lines from the court?”

The editorial notes that:

“…[T]here is a problem with an FIR that draws so heavily upon what the court says, and a court verdict that lends itself to such immediate police action against those standing with the petitioners in cases of 2002. What the court said on Friday and the police taking its cue from it on Saturday also appears to turn on its head the story so far — after all, it was the same court that, down the years, took a number of unprecedented steps to ensure justice for 2002.”

People’s Democratic Party chief Mehbooba Mufti said she was appalled that asking for justice in the country was equated with hatching conspiracies.

The former Jammu and Kashmir chief minister said on Twitter that the judgment should ideally have served as a closure.

Appalled that standing with the victims has been criminalised & asking for justice is equated with hatching conspiracies. To make matters worse, this judgement which should’ve served a closure is instead being used to punish the seekers of justice. https://t.co/sVOFblnKhn

Rights bodies have also called for a protest at New Delhi’s Jantar Mantar, against the arrests.

Protest against arrest of Teesta Setalvad, RB Sreekumar and others at Jantar Mantar 4 pm, 27 June 2022. Participate to demonstrate that justice and human rights still matter… pic.twitter.com/PZf4Ha2S8y

In Kolkata, the Left Front took out a rally demanding the release of the activist.

“In the name of justice, a farce is going on in the country. But this will not wipe off the blood stains of the Gujarat riots from Modi and Shah’s hands. They are even bulldozing the judiciary. But by doing this, they won’t be able to suppress the truth for long,” Left leader Mohammad Salim said.

“Teesta and others have been arrested unlawfully and there is a conspiracy behind her arrest. They must be immediately released,” he added.

In a statement, the CPI(M) had alleged that Setalvad’s arrest is an “ominous threat” to all democratic minded citizens not to dare to question the role of the State or the government under whose regime communal violence takes place.

“This is abhorrent to democratic rights of citizens. However, the action of the Gujarat administration in her arrest has been enabled by the questionable verdict of the three-member Bench of the Supreme Court which has made the complainant into the accused…,” the statement said.

The party said that the SC order – “all those involved in such abuse of process need to be in the dock and proceeded with in accordance with the law” – enabled the arrest.

The party also said that the arrest of the activist also means any SIT established by the court is to be considered “outside the purview of judicial appeals and if anyone appeals against it”, as did Zakia Jafri and Setalvad in the present case, then they are charged with abuse of process .

“A fight for justice for 16 years is described in unusual derogatory terms as keeping the pot boiling for ulterior design, the CPI(M) said, referring to the court verdict.

Rights organisation Amnesty International India had also issued a statement condemning the arrest, as The Wire had earlier reported.

Calling Setalvad’s arrest the “latest assault on civil society”, it urged the Modi government to “ensure Setalvad’s immediate and unconditional release, and to end the persecution of dissenting voices”.

The Working Group of Human Rights in India and the United Nations (WGHR) also condemned the arrest and incarceration of Setalvad.

“WGHR is of the firm belief that Teesta’s arrest amounts to retaliation and reprisals for seeking accountability from all, including those in positions of power, and for standing with the victims of the attack…,” it said.

Continuing further, it said,”We are deeply concerned by the arrest of Teesta Setalvad as it reflects an aggressive abuse of power and law by the State machinery, in grave breach of the rights and freedoms guaranteed to citizens under the Indian Constitution. This turn of events has also raised questions about the Government’s commitments to human rights and Human Rights Defenders (HRDs), not just domestically but also at the global level.”