Report says family did not possess a ration card, two girls were not enrolled with anganwadi and the eldest had not received mid-day meals during summer break. 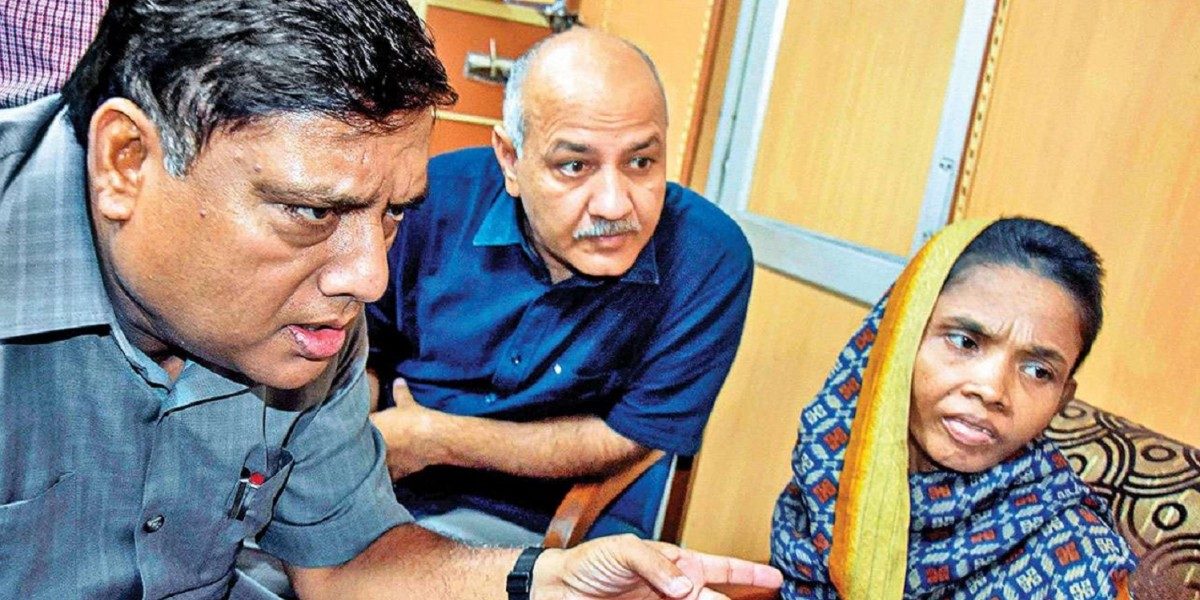 A fact-finding report into the starvation deaths of three minor siblings at their Mandawali home in East Delhi on July 24 has revealed seven systematic failures on part of the Delhi Government and the Centre which could have prevented this tragedy.

The report was prepared by Delhi Rozi Roti Adhikar Abhiyan following a visit to the home and neighbourhood of the victims. They interacted with a cross section of people who knew the family and the report has revealed that there were gaps in policy framework and failure to implement existing frameworks, due to which “the family was not receiving their legal entitlements”.

The major administrative flaws that have been identified in the report are that the family did not have a ration card, there was no functional anganwadi near its place of residence, mid day meals were not being served during vacations and there were no community kitchens in the area. Apart from this, the Abhiyan has also pointed out that there was lack of an accountability mechanism to check these lacunae, inadequate provision of food security and no portability of right to food since ration cards issued in one state are not usable in another.

The team members, comprising Anjali Bhardwaj, Amrita Johri, Dipa Sinha, Koninika Ray, Anwar Haque, Aditi Dewedi and Rajender, had visited Mandawali on July 28. They met several people to learn about the circumstances leading to the death of Mansi (8 years), Shikha (4) and Parul (2), who were found dead in their single room dwelling at Pandit Chowk, where the family had moved just three days prior to the tragic incident.

On reaching this dwelling situated in a two-storey building that had 28 similar rooms with just one common toilet, the team found their room locked from outside. It however, learnt that the family had stayed in the ground floor room with a friend called Narayan.

The neighbours reported having seen the children and that they looked extremely weak. They said the children would come out of the room and defecate in the corridor as they did not have enough strength to go up to the toilet. The family living in the adjacent room, the report said, also reported that girls’ mother also appeared extremely thin and weak, finding it difficult to move around.

The neighbours said they had not seen any food being cooked in the room over the three days the family was there. 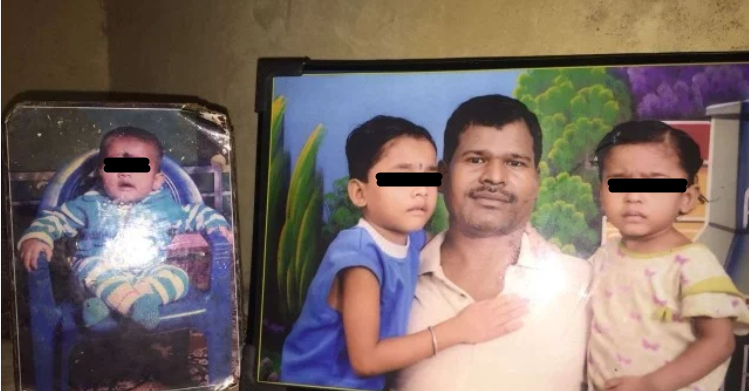 Photos of the children found in their room. Credit: Social media

Most neighbours did not have ration card

Incidentally, the team said none of the neighbours it spoke to had a ration card.

The owner of the building, Sudesh, said she had never seen or interacted with the family prior to the death of the three girls. She explained that most of the tenants were migrants and typically stay for only a few months at a time. Most of them were engaged as daily labourers at construction sites or pulled rickshaws. She claimed that only one or two of the 28 families had ration cards.

Children were not enrolled in neighbourhood anganwadi

While the local anganwadi is located barely a few yards from the room in which the girls died, the report said it was essentially just a corridor with some posters strung up on a wall. The anganwadi was operating temporarily from here as its building was undergoing renovation. While about 20-25 children are enrolled in this anganwadi and used to get a daily meal, neither Shikha nor Parul were enrolled, probably because the family had just arrived over the weekend.

Since the father of the girls, Mangal, pulled a rickshaw, the team also met Pankaj, the owner of the rickshaw garage at Railway Colony, Saket Block, Mandawali from whom he used to hire the vehicle. They also spoke to several rickshaw pullers in the area. The team said the area has several rickshaw garages which rent out rickshaws for Rs 50 per day. Most of the rickshaw pullers hailed from UP or Bihar and had migrated to Delhi for work but only one of them claimed to possess a ration card.

One rickshaw puller, Dileep, a native of Madhubani in Bihar, told the team that till about four years ago, Mangal used to run a “hotel” (local food cart) where he would sell parathas and tea. He also revealed that Mangal’s wife, Beena, suffered from some mental ailment and that after his eatery had shut down, he had taken to pulling rickshaws.

In recent years, Dilip said Mangal had begun drinking heavily and would often sleep on the pavements. He said other rickshaw pullers had an inkling that his children were going hungry and would often buy them some food. According to Dileep, in the fortnight before the family changed its residence, two rickshaws hired by Mangal were stolen, the last on July 21. It was because of this loss that Mangal left Pankaj’s garage and shifted his family out of the room in Saket Block.

At this earlier room of the family, the team found the word ‘Ladli’ scribbled in silver ink on a wall. The neighbours relayed that most of the drawings and words on the walls were the handiwork of Mansi.

A neighbour of the family here, Kiran Devi claimed that the mother of the girls, Beena, would sometimes cook food in the room. However, she was usually dishevelled and was extremely thin. She also often talked about Mangal’s drinking problem. 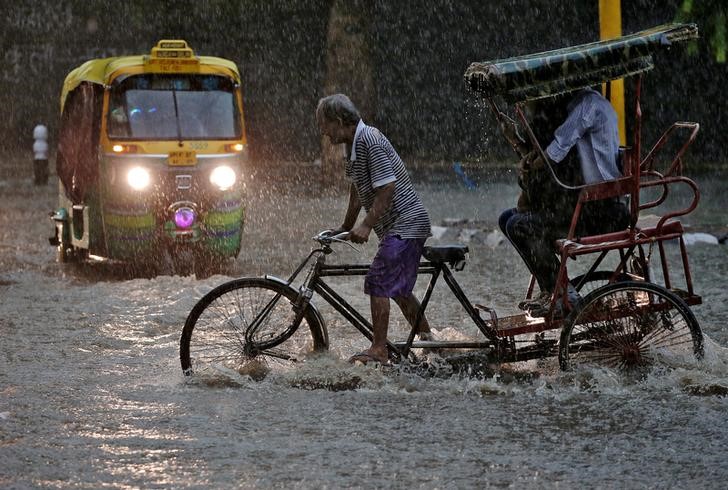 A cobbler fed the girls; his death in June took away their major food source

A grocery shop owner at Saket Block said Mangal’s parathas were famous in the area and the family was known in the neighbourhood. But, he said, the family fell on hard times after the food cart was shut down. He said Mangal loved his children and wife and had distributed sweets to celebrate the birth of his daughters.

The shopkeeper said there was a mochi (cobbler) who sat at the mouth of the bylane who often helped the family by feeding the children some food. However, he died on June 22 and a month later, the girls succumbed to starvation.

The team also learnt that there were no anganwadis servicing the locality of Saket Block where the family earlier lived. It said the girls aged 2 and 4 should have been enrolled at the anganwadi as they were entitled to receive food. Locals, however, claimed that an anganwadi existed only on paper and money was being siphoned off without providing any kind of facilities for the children.

On the official version of the deaths, the report said two post mortem reports from different hospitals have confirmed starvation as the cause of death. The report had stated that there was no food or water in the stomach and there was zero fat in the bodies of the girls.

It said the sub divisional magistrate’s report had also confirmed that the girls were not getting adequate food, though it also points towards some medicine that the father may have given the girls a day prior to their death. Also, the SDM report claimed that funds of about Rs 1800 were available in the bank account of the eldest daughter. However, the report said, the fact that the girls were starving and were not getting adequate food is undeniable.

Denial of entitlements due to gaps in policy framework

The report said though the family was eligible for a ration card, it did not possess one. “A quota system is followed under the PDS, where number of people to be given ration cards is pre-decided and therefore, even if people meet the eligibility criteria, they are excluded. Further, many people get excluded due to insistence on furnishing of identity proof/address proof and Aadhaar,” the report said.

It also noted that there was no functional anganwadi at Saket Block in Mandawali where the family lived for several years and as a result, the two younger siblings were not receiving daily food rations that they were entitled to under the Integrated Child Development Scheme which operates within the framework of the National Food Security Act (NFSA).

The report has also highlighted that the issue of non-functional anganwadis could have been arrested and redressed had the statutory accountability provisions been put in place. “The NFSA requires each state government to implement various grievance redress and accountability provisions, including carrying out of periodic social audits and setting up of State Food Commission. The Delhi government has failed to put in place this statutory framework despite repeated directions from the Supreme Court and the Delhi High Court,” it said. 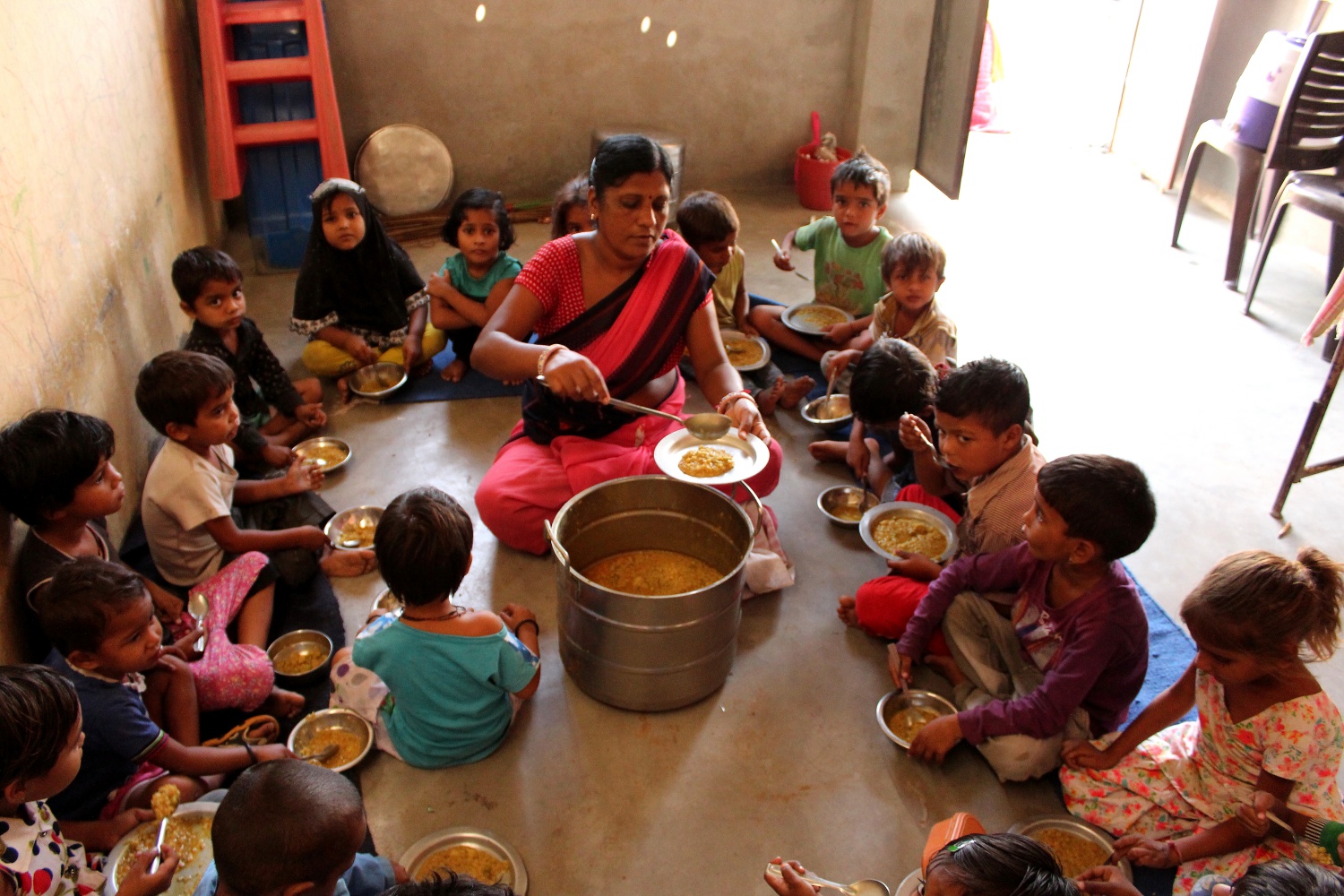 The report stated there was “inadequate provision of food security and failure to deliver on promises to increase entitlements”. In this regard, it said the inadequacy of the entitlements under NFSA have been frequently highlighted by political parties and by people working on food security.

Modi, AAP did not keep their word

The report said as chief minister of Gujarat, Narendra Modi had said 5 kg grain per person under the Public Distribution System as envisaged in the NFSA was wholly inadequate. “However, in the last 4.5 years, there has been no increase in allocation under NFSA either by way of enhancing entitlements or increasing the coverage,” the report lamented.

Similarly, it said the Aam Aadmi Party in its manifesto had promised dal and oil as part of the PDS. “However, no steps have been taken by the government to provide these after election.”

Mid-day meal failure also to blame for death of Mansi

Pointing out that no provision of mid day meal during vacations was available and there was failure to deliver on promises to increase entitlements, the report said according to neighbours and locals, the eldest girl had been regular in attending school prior to the summer vacations but had attended it only for a couple of days in July. “Perhaps the lack of provision of mid day meal during the vacations may have contributed towards her untimely death.”

No funds released for bananas, eggs

On the quality of food served in mid day meals, the report stated that “the issue of enhancing entitlements, especially by including eggs, under the scheme has been a long standing demand of the Right to Food Campaign. As a result of several representations, the Delhi government announced in the 2017-18 budget speech that banana/boiled egg will be provided to each student from the Delhi budget and additional amount of Rs 55 crore was announced. However information received under the RTI Act found that no fund had actually been released and banana/boiled egg were not being provided in schools.” 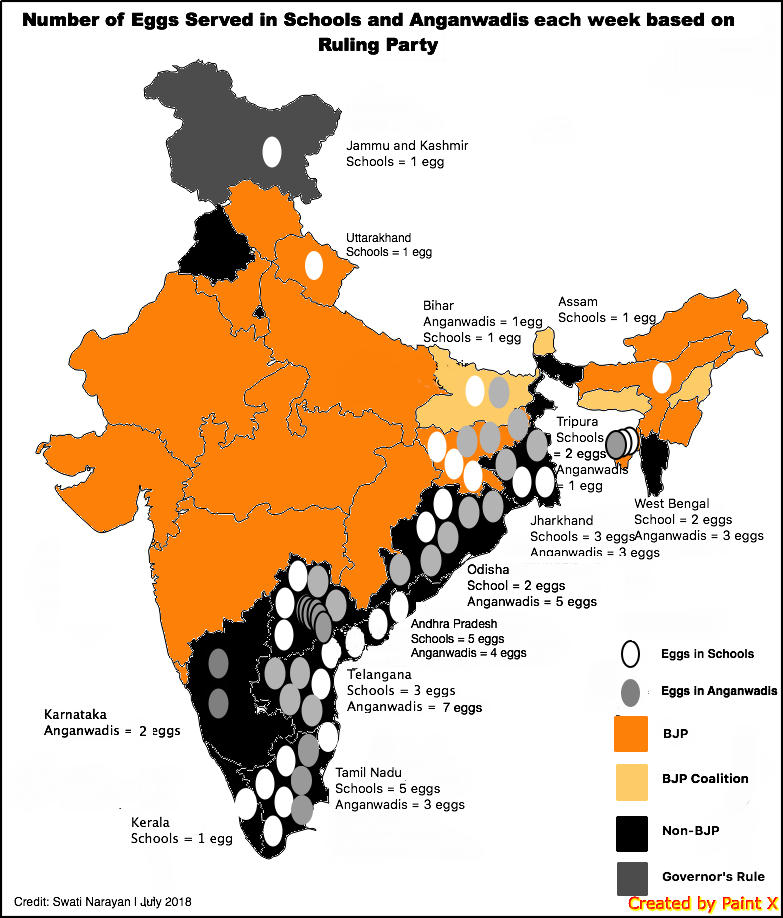 A recent report found that eggs are not served in anganwadis despite their nutritional benefits.

The report said the absence of portability of the right to food is also a major grey area. “The right to food is a fundamental right implicitly guaranteed by the Constitution of India,” it said, adding that yet “ration cards issued in one state are not usable in another, which causes a huge problem for migrants.” It also stated that the insistence on proof of residence in the state where one is seeking a ration card leads to denial of PDS access to a large number of migrants.

Finally, the report highlighted how while in several states in India community kitchens or canteens have been set up to address the needs of the poor and marginalised, including the homeless, there is no such mechanism in place in Delhi.