The SC judgment on designated protest spaces is not only un-implementable, but also profoundly elitist and anti-women. 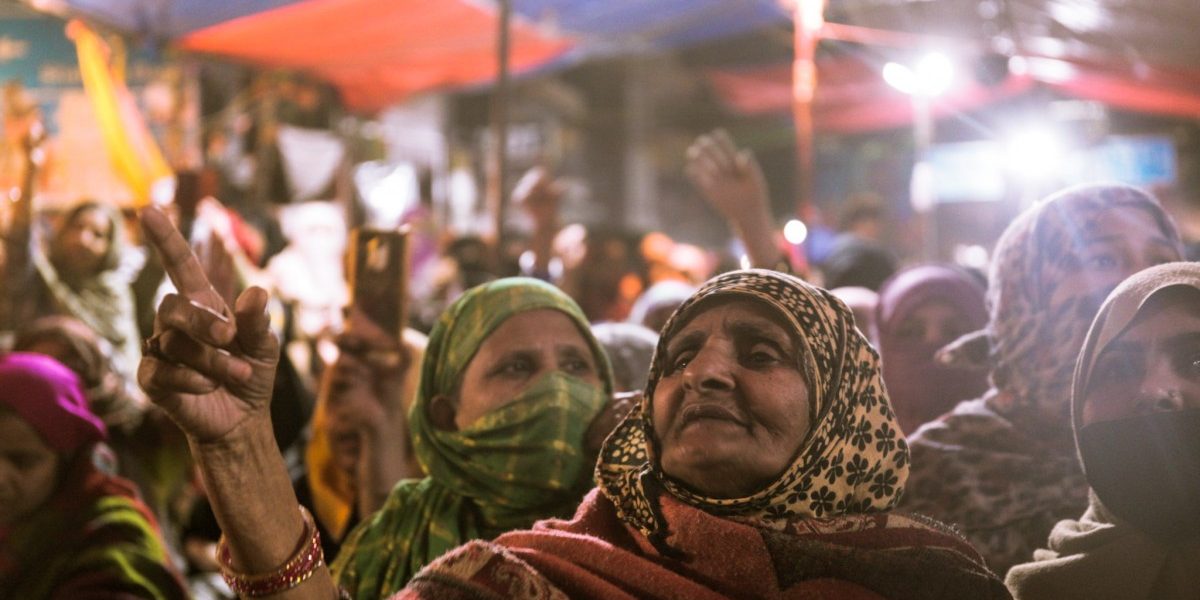 For the last two years, while driving from Delhi University in north Delhi to my home in the south, I find that if I miss the small unmarked turn on the left off a flyover to go to ITO, there is no way I can reach central Delhi without considerable backtracking. The government claims that the Pragati Maidan makeover that has blocked the road is for the public good, even if that claim has been contested, both by way of public petitions and legally. But whether or not it is indeed for the public good, can I assert that my rights as a commuter matter more than the project, especially since like many other projects, it is taking indefinite time? In a city that is increasingly bisected by flyovers, cyclists and pedestrians are routinely inconvenienced and blocked. Are they not commuters too? In the government’s eyes, they may be c-class citizens who need not be factored in while making urban plans, but technically they are still equal citizens even if not equal commuters. But would the courts even entertain their petitions?

There are any number of cases where the rights of commuters are restricted by government action or inaction (for example, in clearing illegal constructions which obstruct right of way). However, in the recent judgment, Amit Sahni vs Commissioner of Police and ors, by a three-judge bench of Justices S.K. Kaul, Aniruddha Bose and Krishna Murari, the rights of commuters have now been elevated to something like a fundamental right.

The judges pride themselves on trying, even if they failed, to find a solution (para 11) where the “rights of protesters were to be balanced by that of commuters” (para 16). The entire petition both before the high court and the Supreme Court is based on the rights of commuters who were ostensibly blocked by protesters at Shaheen Bagh, mobilising against the Citizenship Amendment Act (CAA). The committee of interlocutors sent by the SC to mediate with the Shaheen Bagh protesters was also focused on finding a way to reconcile their protest with the needs of commuters. Neither the government nor the Supreme Court sent any mediators to talk to the women about the content of their demands, and why they felt it necessary to camp outside in Delhi’s freezing winter for over a hundred days.

There is no mention in the SC judgment of the fact that the anti-CAA protests, not just in Shaheen Bagh, but across the country, were animated by a perceived violation of Article 14 – the fundamental right to equality of citizenship. We are now given to understand that no opposition – however grievous the hurt to one’s fundamental rights – can come in the way of the right of commuters.

The judges assume an economic philosophy that earmarks taxpayer money to subsidise the rich. In this worldview, hawkers are not seen as legitimate occupants of public sidewalks but luxury cars pay nothing for hogging public roads as parking places, and stationing their guards to capture these public spaces. Anganwadi workers from Karnataka at Ramlila Maidan in Delhi for a protest.

As citizens, we pay our taxes as much to be allowed to use the streets for protest as to drive SUVs along these roads. As the theorist Judith Butler reminds us, “we know from disability studies that the capacity to move depends on instruments and surfaces that make movement possible.” In much the same way, she argues, the public right to assemble (in our case guaranteed by Article 19 b) means nothing unless we have the public infrastructure to assemble. The rich can afford to have meetings inside their homes but for the ordinary citizen, the public street is both home and outside.

In the Hathras case, Section 144 was imposed keeping out those who wanted to meet the victim’s family and protest rape, while hundreds of upper-caste defenders of the accused assembled outside the house of former BJP MLA Pahalwan. He has been quoted as saying “This gathering has been held at my personal space. It didn’t require any permission from authorities.”

The absurdity of ‘designating’ protest spaces

The judges, no doubt, also pride themselves on their liberality in allowing that democracies must allow, and may even require dissent, before making it “unequivocally clear that public ways and public spaces cannot be occupied in such a manner and that too indefinitely. Democracy and dissent go hand in hand, but then the demonstrations expressing dissent have to be in designated places.” (para 17)

The idea of a ‘designated place’ for protest is as absurd as saying that one must shout only designated slogans and carry designated placards. Protests come in all shapes and sizes, about all manner of issues. Let us assume for a moment that Jantar Mantar is the ‘designated’ protest site in Delhi, though in the MKSS case, local residents contested even that.

If the students of Delhi University are upset about some action in a particular college, can they occupy the road outside the college or are they to go to Jantar Mantar? If the doctors of the MCD-run Hindu Rao Hospital haven’t been paid for months, should they protest outside the hospital or Jantar Mantar? If the latter, the strike would be even more total since doctors would not be able to strike and work in rotation.

What sense does a strike – or strikebreakers – make if there is no picket line before the factory, designated or not? Are women picketing liquor shops or protesting outside the homes of wife-burners and wife-beaters out of line because these are not ‘designated spaces’?  Given the range of issues and constituencies on any one day in any one city, this could potentially lead to massive traffic jams in the designated site, and dare one say, cause even more inconvenience to commuters. It would also mean that only organisations or political parties who can hire buses and take commuters to designated spaces are effectively entitled to protest.

It is people who decide on the designated space to protest, not the authorities. It was Gandhi who chose Dandi to make a public statement about the immorality of a salt tax, not the British. General Dwyer made Jallianwala Bagh a garden of blood, the public made it into a site of resistance. Tiananmen Square became synonymous with protest not because of the tank but because of the person who stood in front of the tank. Public sites – whether of protest or proclamation – are meaningless without the public. For each locality or each cause there may be a different site which is invested in meaning.

In their attempts at sociological analysis of the Shaheen Bagh case, the judges tell us that the movement was leaderless and working at cross purposes, the women appear to have lost control over it, the ‘huge periphery’ of male bystanders and volunteers had a vested interest in the blockade continuing, and there was a ‘general unwillingness’ to move to an alternate site. They also claim that the women possibly did not recognise ‘the ramifications of the pandemic’ – even though by March 22, there were only five women inside the tent, with others being represented by their footwear.

All of these are common tropes when it comes to women’s movements – how women are incapable of ‘proper’ organisation and leadership and are essentially being guided from behind by men. It is true, as a number of sociological studies on women’s movements have shown, that women’s movements tend to be less formal and hierarchical, less driven by leaders and personalities, and more centred on everyday concerns like price rise, wages, environmental loss. But these are advantages rather than problems.

What is more, Shaheen Bagh follows a standard pattern where the location of the movement is intrinsic to both the demand and the success of the movement. In the famous Chipko movement, the women of Garhwal hugged the trees in their own forests to protect them – they did not find some designated trees to hug.

In Shaheen Bagh and other anti-CAA sites occupied by women, citizenship is not some distant aspiration – it is the here and now of seeing their families turned into second class citizens, their children beaten up in universities. Women’s protests depend significantly on being located around sites where they live or work, where they can go home easily to their families or bring their children to protest. In saying that dissenters cannot occupy public spaces, the honourable male judges are effectively saying that women must keep out of the public sphere. 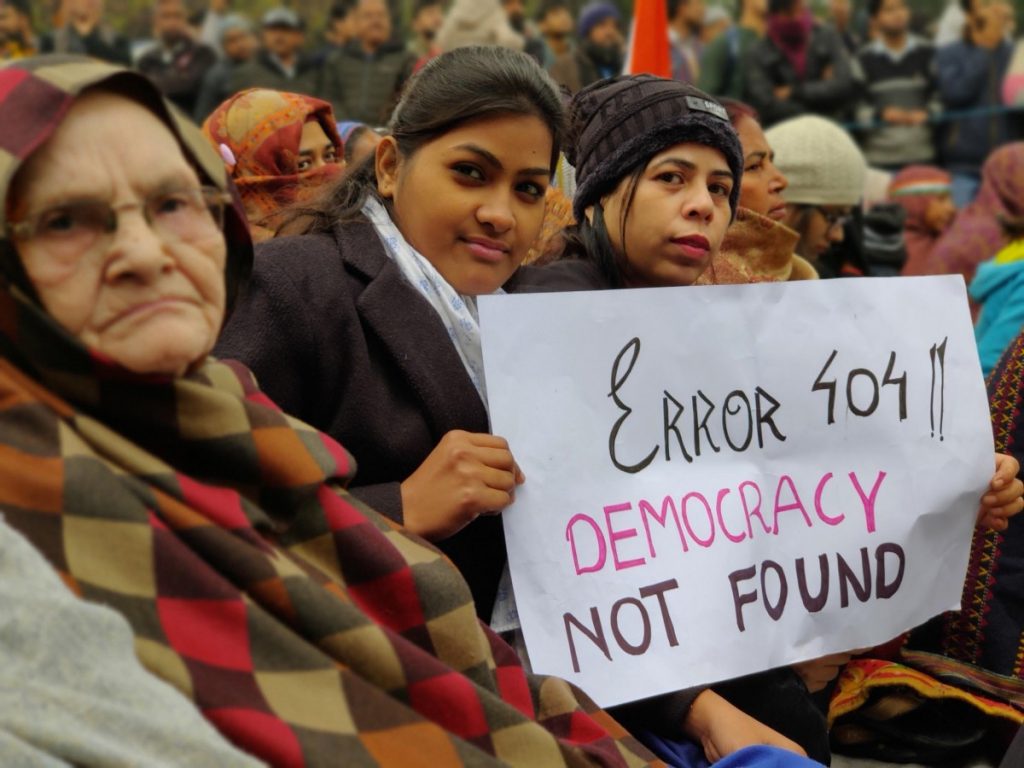 If “the erstwhile mode and manner of dissent against colonial rule cannot be equated with dissent in a self-ruled democracy,” the government must equally be reminded that in a democracy, dissent cannot be dealt with as an act of sedition, or outlawed simply because it goes against the government’s ideology.  As Justice Madan Lokur has noted, by imposing Section 144, designating some marginal spot as a protest site, closing of public transport or the internet, or simply disallowing a rally or procession on the grounds that it will threaten law and order, governments are increasingly stifling dissent.

We might all, including the judges, benefit from reading Gandhi’s evidence before the Hunter Commission in 1919-20 on why he called for public meetings to be held in every part of India to protest against the Rowlatt Act. For Gandhi, there were certain laws that were so repugnant, that it was one’s moral duty to disobey them. And when petitions failed – as they always do – satyagraha was the only constitutional way, whether under colonial rule or self-government.

Supposing your own ministers pass any law, would it be open to anybody and everybody to break them?

Supposing your own minister, your own representative government, passes a law, that is a guarantee that it is a good law, and do you mean to say that under your satyagraha principles it is open to any body of men to preach the breaking of those laws and to break those laws? The remedy is to turn out those ministers?

Gandhi: A satyagrahi would exhaust all means possible, but I simply gave you a concrete instance of a minister under a democracy having made himself practically irremovable because he would not listen to those who have got the voice of conscience in them. What are those people who have got that voice within them then, to do; although it is their own domestic affair of their Government, even so it would be not only open but it would be the duty of a body of satyagrahis to offer civil disobedience, but when they can turn out the minister, naturally let them do so. If I could have turned out Lord Chelmsford, I would have said, “Lord Chelmsford, you go if you do not remove the Rowlatt Act,” and I would have got some other Viceroy from England.

When a government does not listen to its citizens, when its judges block them out of the public sphere, then all they have is their voice of conscience. Our conscience will not allow us to hide in designated spaces when the country is being taken from us.