The economic interests of various countries prevent them from raising the issue of persecution of Uyghurs in Xinjiang with China which uses “anti-terrorism” to justify its authoritarian practices.

In February, Mohammed bin Salman, Saudi Arabia’s crown prince, declared on Chinese state television, “China has the right to carry out antiterrorism and de-extremisation work for its national security.”  He was following the clumsy script that China has used repeatedly to cover up its violations of the human rights of the Uyghur people in Xinjiang province.

The alibi is common to authoritarian states who create “states of exception” and “emergency resolutions” to bypass the rule of law, substituting its self-appointed notion of “right” to violate human rights doctrine conventions. In the case of the Uyghur, an entire people has been categorised as “terrorist,” and China has developed a massive and programmatic response to such “extremism” — concentration camps that extract labour at the same time as they suppress any thoughts, beliefs, cultural values, language, even food, that evinces Muslim identity.

Besides bin Salman, other leaders regarded as vigorous advocates for Muslims have also signed on to what might be called the “Uyghur Exception.” In 2017, Pakistan’s current prime minister, Imran Khan, while still in the political opposition party, condemned the “hypocrisy” of the international community in failing to protect the rights of Rohingya Muslims in Myanmar; Khan also has criticised human rights violations against Muslim Kashmiris.

But when asked about the Uyghur, Khan said, “Frankly, I don’t know much about that,” explaining that the issue was “not so much in the papers.”Many speculate that, like bin Salman, Khan has chosen not to defend Uyghur Muslims because of the lucrative trade deals Middle East countries are inking with China.

In the case of Pakistan, this has taken the form of the China-Pakistan Economic Corridor (CPEC) along the Arabian sea, a project priced at $60 billion. In an op-ed in the Washington Post, Barkha Dutt notes that “China has long used its economic investments for strategic expansionism, especially in countries that share a border (maritime or terrestrial) with India. Whether it’s Nepal, Bhutan, Sri Lanka or the Maldives, China has dangled investments in exchange for influence.”

Economics also plays a significant role in the persecution and repression of the Uyghur as well. Approximately ten million Uyghur are concentrated in Xinjiang province, also known as the Xinjiang Uygur Autonomous Region (XUAR).  It spans some 640,000 square miles, representing about one-sixth of the total land area under the control of the People’s Republic of China.

Also read: In Hong Kong, Memories of Tiananmen Square Are Both Alive and Relevant

China has long been intent on exploiting Xinjiang’s vast natural resources — increasing oil extraction and refining, along with coal and natural gas production, among other resources.  The province has an estimated twenty-one billion tons of oil reserves; its coal resources represent 40% of China’s total. Thus the repression of the Uyghur takes place simultaneously with the plundering of Xinjiang’s natural resources.

But Xinjiang is essential for another reason: it is the hub of the most ambitious infrastructure project in modern history. The Belt and Road initiative runs along the old Silk Road and will span three continents and cover almost 60 % of the world’s population.  It is the vehicle with which China hopes to become the world’s dominant superpower.  Thus it is all the more essential to control this critical geopolitical area with an iron hand.

The suppression of the Uyghur also has both a direct and indirect benefit.  It represses an entire population, and that repression serves as a threat to any other group that would challenge Chinese hegemony.  The construction and maintenance of the concentration camps are meant to “re-educate” the rest of China, and indeed the world, at the same time it tortures the Uyghur and extracts all elements of their independence.

The roots of Uyghur repression

Some have said that the repression and imprisonment of Uyghurs and the physical and psychological torture imposed upon them, resemble the Chinese government’s crackdown on the members of the Falungong spiritual sect in the late 1990s. Initially, the government tolerated the emergence of this group. Yet as their numbers rose exponentially (to nearly seventy million), China saw them as a real threat to state ideology. 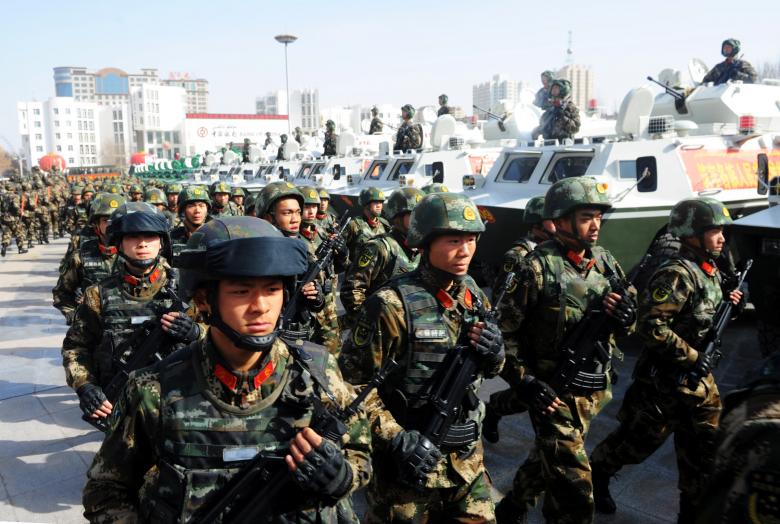 “separatists” — threats to the Communist Party. In all three cases, repression has taken the form of imprisonment, surveillance, and “re-education.”Yet of all these groups, the Uyghurs stand out as targets of both Islamophobia and racism.

Unlike another large group of Muslims in China, the Hui people, Uyghurs are not ethnically or culturally Chinese, but rather Turkish — this makes them specifically open to persecution on the basis not only of religion but also of race. Their culture and language (an Asian Turkic language similar to Uzbek) have been degraded, and they occupy the lowest rungs of the social and economic hierarchies.

Also read: Review: Of Dissent, Independence Movements and the Fight for Identity by Minority Societies in China

The Uyghur have chafed under these conditions for decades and began carrying out militant actions in the late 1990s. Such groups as the Eastern Turkestan Islamic Movement (later the Turkestan Islamic Party) drew international attention both because of their aspirations to join Al Qaeda and attacks perpetrated around the Beijing Olympics. But the most prevalent instances of violence have been sporadic, autonomous, and of short duration.

It is thus a combination of economics, culture, religion, resources, and strategic location that drive the current repression of the Uyghur; the economic interests of Middle East countries prevent them from raising this issue with China.

In August 2018, Gay McDougall, a member of the UN Committee on the Elimination of Racial Discrimination, cited estimates that two million Uighurs and Muslim minorities were forced into “political camps for indoctrination” in the western Xinjiang autonomous region.  She said:

“We are deeply concerned at the many numerous and credible reports that we have received that in the name of combating religious extremism and maintaining social stability (China) has changed the Uighur autonomous region into something that resembles a massive internment camp that is shrouded in secrecy, a sort of ‘no rights zone.’”

The deprivation of rights is, of course, seen as necessary for China to succeed in its ambition to forcibly strip the Uyghur of their Muslim identity and subjugate them to Han dominance. Any presence of Islam is seen as the presence of terrorism and separatism.

The Chinese government has said that these are “vocational training centres” meant to eliminate “the soil for the survival of terrorism,” according to Shohrat Zakir, chairman of the Xinjiang Uyghur Autonomous Region. A speech delivered by Chinese Communist Youth League Xinjiang Branch, March 2017 stated:

“The training has only one purpose: to learn laws and regulations … to eradicate from the mind thoughts about religious extremism and violent terrorism and to cure ideological diseases. If the education is not going well, we will continue to provide free education, until the students achieve satisfactory results and graduate smoothly.”

Of course, a significant part of “re-education” involves the censoring and imprisonment of Uyghur intellectuals. Their alleged crimes are the standard ones — they are accused of preaching “separatism” and called “two-faced.” “Two-faced” is a term applied by the government to Uyghur cadres who pay lip service to Communist Party rule in the XUAR but secretly push against state policies repressing members of their ethnic group.

Dolkun Isa, president of the exiled World Uighur Congress, has claimed that two million people are detained in “concentration camps” in Xinjiang. The Uyghur Human Rights Project (UHRP) estimates that some 435 intellectuals (mostly students, but also teachers and researchers) have been imprisoned or disappeared. According to the Xinjiang Victims Database, 49 individuals have died in custody or shortly after their release, among them religious scholars Muhammad Salih Hajim and Abdulehed Mehsum; scholars Abdusattar Qarahajim and Erkinjan Abdukerim; and students Abdusalam Mamat, Yasinjan, and Mutellip Nurmehmet.

In response, an international petition has been started by a group called Concerned Scholars on China’s Mass Detention of Turkic Minorities. This group includes signatories such as Noam Chomsky, Judith Butler, Saskia Sassen, Hatem Bazian, Laleh Khalili, and hundreds more (including me). The letter does as good a job as any document laying out the broader implications of what China is doing in Xinjiang:

China has defended its mass incarceration of Turkic Muslims on the basis of counter-terrorism.  However, it is also apparent that China is both seeking to embed its Xinjiang-focused policies in counter-terrorism cooperation with international partners and to export the methods and technologies that have underpinned its “surveillance state” in Xinjiang. If what is happening today in the XUAR is not addressed by the international community, there is a likelihood that we could see its replication in other authoritarian states who have used the label of “terrorist” to describe those who peacefully resist state hegemony.