Refuting the claims made by the police on Friday, Bharadwaj, in a handwritten letter, said that the letter being offered as proof by police was “totally concocted”.

New Delhi: In response to the growing national outrage over the arrest of five well-known rights activists earlier this week, the Maharashtra police on Friday claimed to have “conclusive proof” linking them – and five other activists arrested in June – to the banned Communist Party of India (Maoist) and an alleged plot to assassinate Prime Minister Narendra Modi.

A letter that the police says it recovered on April 17 after a raid on Rona Wilson, one of the activists arrested in June, speaks of ending “Modi-raj” with a ‘Rajiv Gandhi-type incident’, additional director general (law and order) Parambir Singh told reporters in Mumbai.

At the time of their arrest, the Pune police accused them of being connected to the Bhima-Koregaon violence in Maharashtra in January, when Dalits were targeted by supporters of upper caste groups allegedly belonging to the Hindutva organisations run by Manohar alias Sambhaji Bhide and Milind Ekbote.

On Saturday, Parambir Singh said the police have seized “thousands of letters” exchanged between the “overground” and “underground” of Maoists, he said.

On August 28, the Pune police raided the homes of prominent left-wing activists in several states and arrested five of them – Varavara Rao in Hyderabad, Vernon Gonsalves and Arun Ferreira in Mumbai and Thanea, Sudha Bharadwaj in Faridabad and Gautam Navlakha in Delhi.

The police said  the raids were carried out as part of a probe into the Elgar Parishad conclave in Pune on December 31 last year, and the violence at Bhima-Koregaon the next day. However, civil society groups and the media have condemned the raids as an attack on the right to dissent.

The Supreme Court has ordered that the five be kept under house arrest rather than handed over to police custody and fixed September 6 as the date of next hearing for a petition filed by prominent citizens alleging mala fide in the raids.

The letter purportedly recovered along with a “chip” from Wilson was written by ‘R’ to one “Comrade Prakash” said: ‘We have received your last letter regarding current situation here. Arun, Vernon and others are equally concerned about the urban front struggle’. The letter also spoke of requirement of Rs 8 crore for supply of rifles, grenade launchers and four lakh rounds (of ammunition).The letter asked Prakash to convey his decision,” he said. “Comrade Kishen and a few other comrades have proposed concrete steps to end the Modi raj. We are thinking along the lines of another Rajiv Gandhi-like incident,” Singh quoted the letter as saying.

“After the Elgaar Parishad at Pune on December 31, a case was registered by police on January 8 about the event where hate speeches were delivered, he said. Most of them (who allegedly delivered the hate speeches) were associated with Kabir Kala Manch. Our investigation revealed that a big conspiracy was being plotted by Maoist organisations and the accused were helping them to take their goals forward” he said.

“On April 17, raids were conducted at six places, based on the information available, he said. The raids were videographed and there was proper ‘panchnama’. On May 17, sections under the Unlawful Activities (Prevention) Act were evoked against the activists,” he added.

Thought the April 17 raids were when the “assassination plot” letter was supposedly recovered and  UAPA charges were added a month later, the plot was not mentioned in the police arguments seeking the transit remand of Wilson and the other four arrested in June.

Curiously, the first meeting to review the prime minister’s security in the light of the discovery of this plot to stage a “Rajiv Gandhi type incident” came not in April, when the letter was supposedly recovered, or even May when UAPA charges were added but only on June 11, after the police mentioned the “letter” in court on June 8, prompting questions over its authenticity.

At the press conference on Friday, the police also released a copy of an undated letter in Hindi purportedly written by “Comrade Sudha” to “Comrade Prakash”.

The same letter was aired by BJP MP Rajeev Chandrashekhar’s channel ‘Republic TV’ as “Super Exclusive Breaking News” on July 4. Bharadwaj had then categorically denied that the letter referred to by Arnab Goswami’s channel – if at all it existed – was ever written by her and claimed that pro-Modi government channel has defamed her and caused “professional and personal injury”.

Refuting the claims made by the police on Friday, Bharadwaj, in a handwritten letter, said that the letter being offered as proof by police was “totally concocted”.

Regarding the letter issued to the press by Pune police:

I once again declare that this is a fabricated letter, which I had refuted when it was first flashed on Republic TV on 4th July, and which has not even been brought before either the Pune court nor the CJM (Chief Judicial Magistrate) Faridabad while seeking to whisk me away to Pune.

In his press conference, ADG Parambir Singh said some of the letters exchanged between the arrested activists spoke of planning “some big action” which would attract attention. Delhi University professor G.N. Saibaba was arrested in 2014 on the basis of similar evidence, including letters, he said. 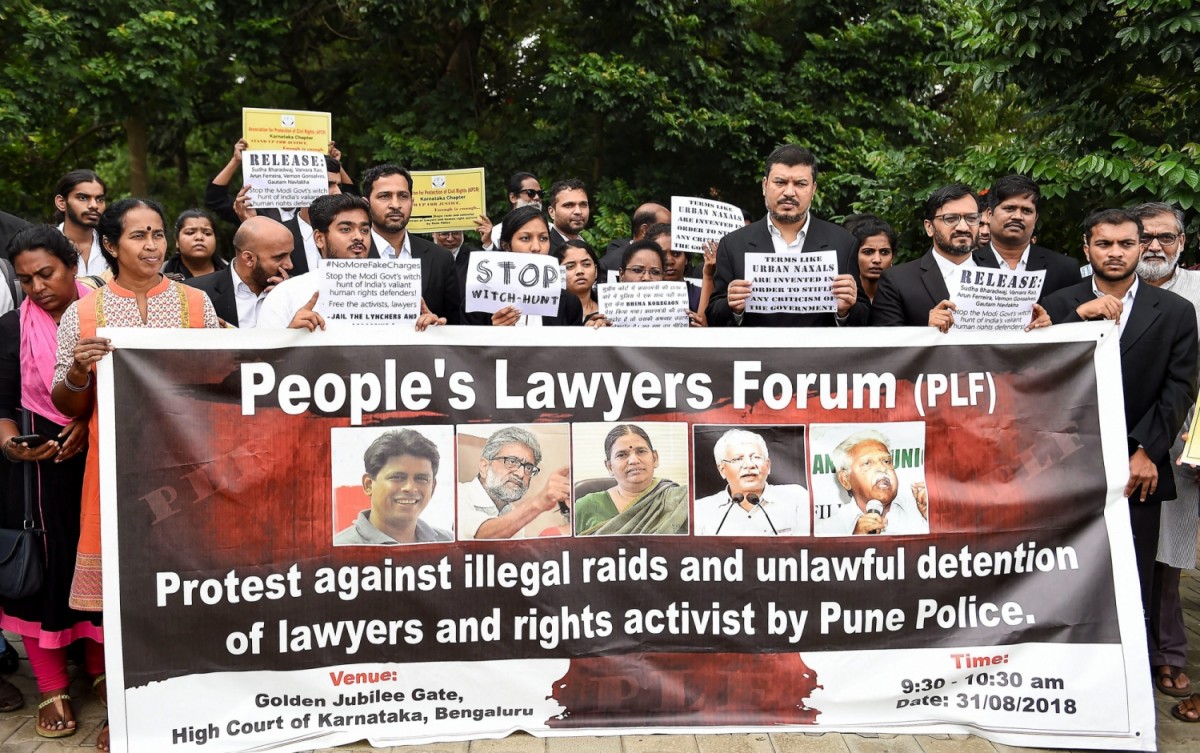 “Police only moved to take action against these people (activists) when we were confident that clear links have been established between these overground activists and underground Maoists. The evidence in our possession clearly establishes their links with Maoists,” Singh said.

“Information obtained after seizure of such letters and other items shows the involvement of “overground” Maoist cadres in planning subversive acts. The central committee of Maoists communicated with these activists through password protected messages sent via courier,” he said.

He did not, however, say what this information was or explain why this information did not form part of the FIR or arrest documents when the police picked up the five activists on August 8. Meanwhile, activists from Dalit and socialist organisations held a protest rally outside the suburban District Collectors office in Mumbai on Friday, demanding the release of writer Sudhir Dhawale and four other activists arrested by Pune police in June.

Activists from these organisations held simultaneous rallies in Pune, Nagpur and Gadchiroli districts, to protest the polices claims that the five people arrested are top urban Maoists who incited the Koregaon-Bhima violence.

(With additional inputs from PTI)