'Down with fascist BJP,' Lois Sofia, a masters student in mathematics, had shouted at Tamilisai Sounderajan after the plane they were travelling in landed at Thoothukudi airport. 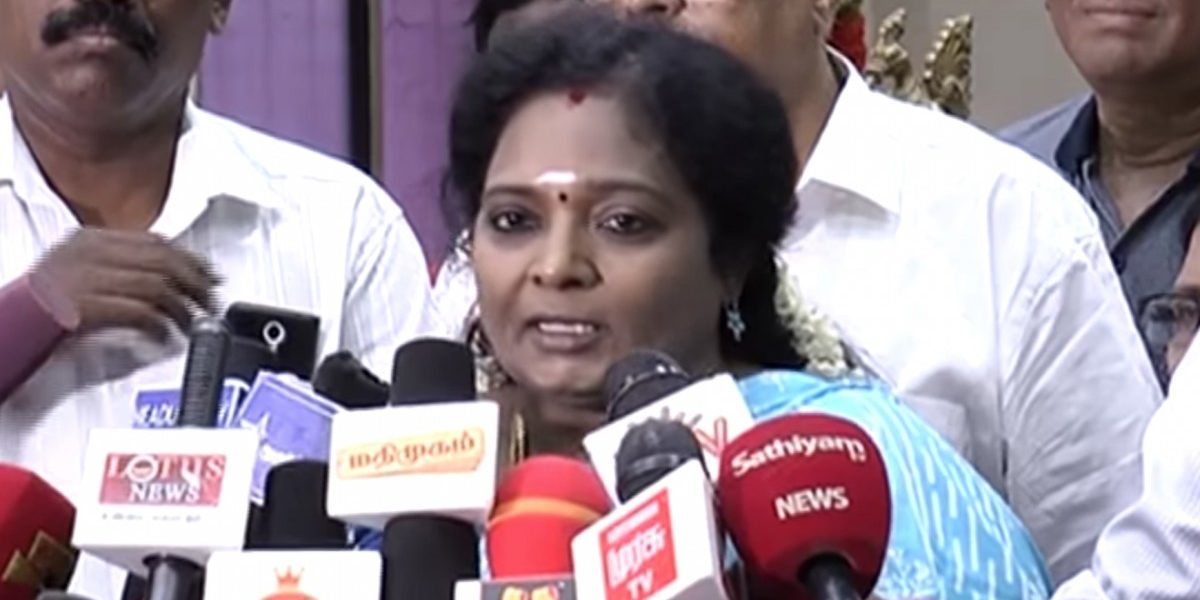 Chennai: Hours before she landed in an argument with Tamilisai Soundararajan, president of the Bharatiya Janata Party (BJP) in Tamil Nadu, Lois Sofia, a student of mathematics at a Canadian university, tweeted that she was on the same flight as the politician and really wanted to shout slogans against the “fascist BJP government”. “Will I be kicked off the flight?” she had asked.

Hours before Soundararajan decided to take the young student’s slogan seriously enough to have the police detain her in Pudukkottai, the BJP leader had declared that Tamil Nadu was already a “saffron state”. In what seemed like a response to Dravida Munnetra Kazhagam president M.K. Stalin’s call to defeat the saffron forces, she had said there would be a “saffron revolution if they [the BJP] were hurt.”

Sounderajan alleges that Sofia shouted ‘Down with the fascist BJP’ after the plane had landed. Neither she nor anyone else has alleged there was any physical contact. Yet the BJP leader claimed her “life was in danger” and insisted on filing a police complaint, following which the student was arrested.

“She is smart, she knew what she was doing,” Soundarrajan was seen telling the police who had tried to pacify her at Thoothukudi airport, saying the woman, aged 28, “was young”.

“Tamilisai waited for an hour in the airport demanding an apology from Sofia,” said E. Athisayakumar, Sofia’s lawyer. “The police tried to convince her but Sofia refused to give in. She told me she had done no wrong.”

Shortly after, an FIR was filed under IPC sections 290 (public nuisance in cases not otherwise provided for) and 505 (statements conducing to public mischief). Sofia’s remand itself was “under IPC Section 290 and 75 (1) of the Tamil Nadu City Police Act,” according to Athisayakumar, suggesting that she would soon be released on bail. Incidentally, soon after her arrest, Sofia was admitted to the government general hospital in Thoothukudi on account of her ill health.

Athisayakumar told The Wire, “She is the state president of a national party and a doctor herself; I feel Tamilisai could have handled [the situation] better even if she was offended by the slogans that Sofia had raised. She could just have spoken to Sofia and tried to explain it to her. This is not the way you deal with dissent.”

However, Soundarrajan had told mediapersons after filing a police complaint that she was suspicious of Sofia’s background and that “she could have had links with terrorist organisations”. “My life was in danger,” she said. Athisayakumar thought “that was very cheap of her” to say so.

As news of the incident spread on Monday night, support began to pour in for Sofia. The hashtag #FascistBJPdowndown began to trend on Twitter, with Stalin joining in.

“The state government’s action is against democracy and freedom of expression. It is condemnable. Sofia should be immediately released. If you are going to arrest everyone raising such slogans, how many lakhs of people will you send to jail? I too say that! BJP’s fascist rule down down!” the leader tweeted in Tamil.

Meanwhile, Sofia’s father, Dr Samy, said he had filed a complaint against Soundararajan and BJP cadres who had abused and threatened his daughter. “I have filed the complaint but I am not sure if there will be any action against Tamilisai. It is unfair,” he told The Wire.

Nityanand Jayaraman, an environmental activist who had participated in and written widely on the anti-Sterlite protests, called the incident “unfortunate”. “This indicates a collapse of civil administration. It is evident that the central government is involved,” he said. “We should also know that situation in Thoothukudi continues to be abnormal. I think Sterlite vitiated the atmosphere, which was already vitiated across India.”

When the protests in Thoothukudi were on and before the unexpected police-firing, Sofia had also written for The Wire on the issue.

M. Vetriselvan, a lawyer and an environmental activist, agreed. “Sofia’s case cannot be seen in isolation. It is part of the larger problem of the Hindutvaisation of our administrative forces,” he said.

With her detention, Sofia joins the long list of activists from Tamil Nadu arrested repeatedly for raising dissenting voices on various issues ailing the state.