By hyping up cases of terrorism, we are actually doing a disservice to the foundation of our police system, which has strived hard to maintain peace and law and order. 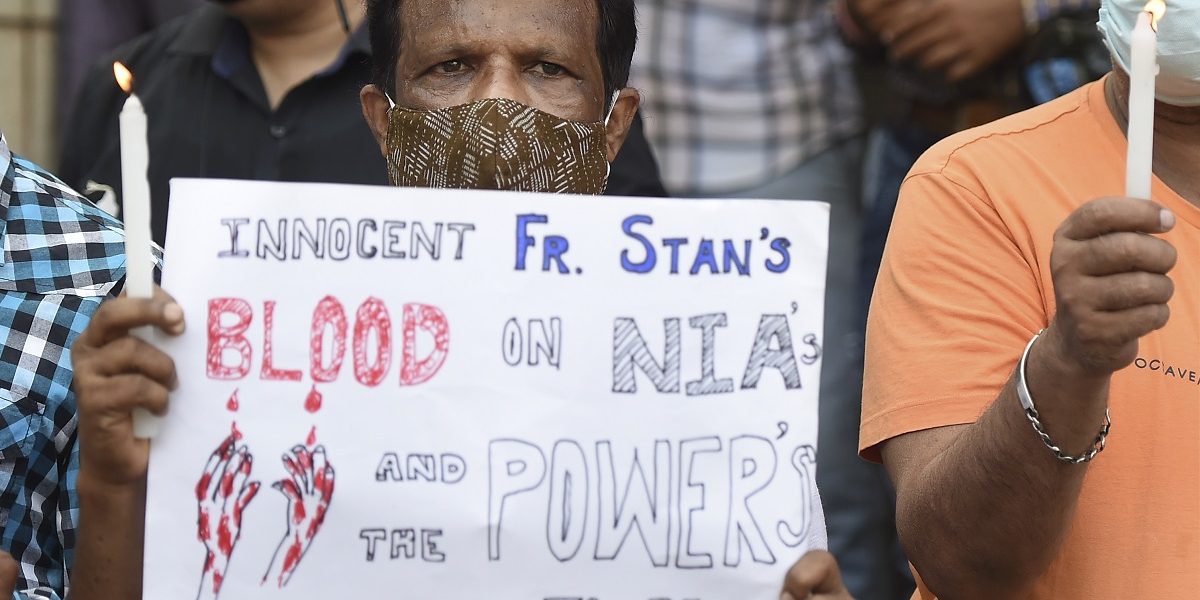 Father Stan Swamy’s death will rankle the conscience of our criminal justice system for years to come. In the world’s largest democracy, where even convicts serving sentences have certain rights, Swamy, an undertrial, failed to get his due from a clutch of agencies responsible for his incarceration and bringing him to justice. His demise is a grave pointer towards a broken criminal justice system crying for reforms.

Swamy was arrested under the Unlawful Activities (Prevention) Act (UAPA) in October 2020 for his alleged role in Bhima Koregaon violence in 2018 and his links with Maoists. He had earlier come to prominence as a tribal rights activist. Prior to his arrest, during many rounds of questioning, necessary information, evidence had been extracted by the investigative agencies and his computer and relevant documents had also been seized. As a result, after his arrest, the National Investigation Agency (NIA) did not even seek his custody.

The first point which then arises is whether his arrest was necessary at all? After putting up the chargesheet, it would have been the court’s call to remand him to judicial custody or not. An old man of 84 years, afflicted with Parkinson’s disease and merely named in a case, certainly merits such a treatment. Even the Supreme Court, citing COVID-19 conditions, had said that for all offences with less than seven years punishment, investigative officers should use their discretion whether arrest is necessary. In Swamy’s case the punishment for UAPA is seven years but looking into his age and health, this could have been made possible, rather than transferring him to a jail in Maharashtra. There was no threat of his jumping bail or influencing the case in any manner.

Secondly, prison administration is squarely responsible for the safety and health of prisoners. Even the judge while remitting him to jail, should have given instructions for extra care looking into his age and precarious condition. Does the jailor need permission from court to give sipper to a Parkinson’s afflicted undertrial? What a travesty of justice. Does a serious patient need court orders to be shifted to hospital? The state prison authorities failed to discharge their duties faithfully.

Third, Stan Swamy applied for medical bail and the prosecution merely stonewalled it routinely, questioning the credentials of even his illness. Lastly, the courts could not evaluate his case carefully and grant him bail, which he truly deserved on account of his advanced age and serious affliction. 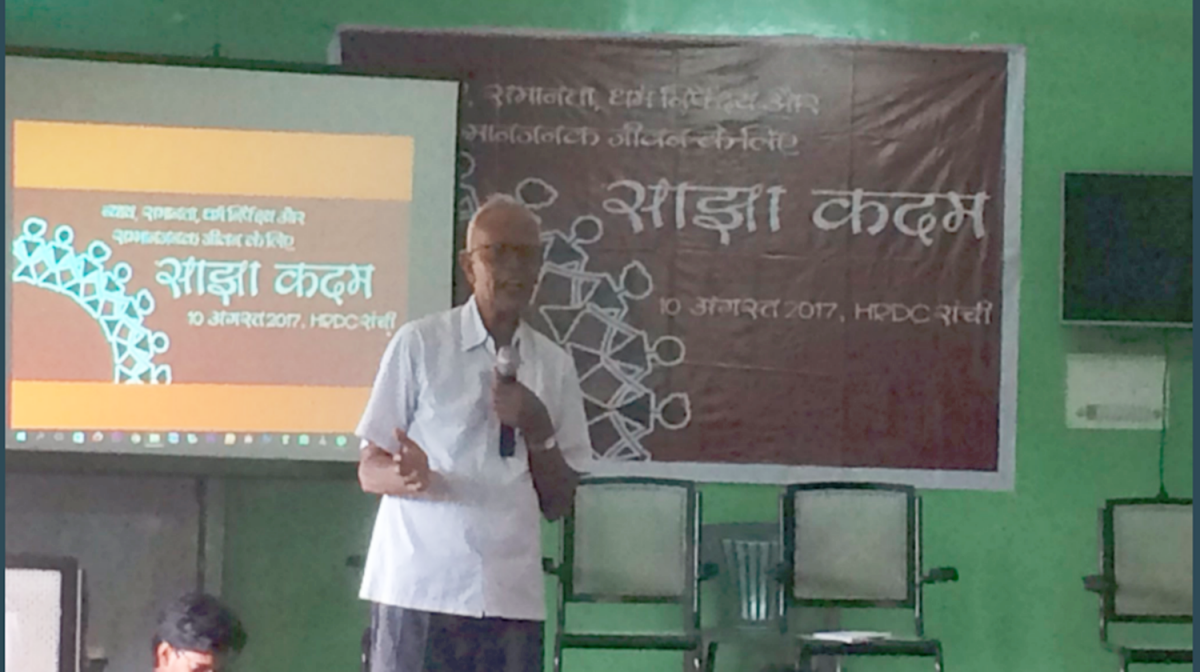 Swamy’s death has thrown up a number of serious issues before the nation. UAPA 1967 was meant to be used against terrorists. But can poster walas, couriers, sympathisers, propagandists and even rioters be called terrorists? Between 2015 and 2019, 7,840 arrests were made under UAPA. Are we publicising that we have so many alleged terrorists in the country? No wonder only 155 were convicted. Casual application of this law has given very poor results i.e. a conviction rate of less than 2% which should worry the minds of police leaders. In 2019 alone, there were 1,948 arrests with mere 34 convictions.

This calls for a serious course correction. The Act was amended in 2008 after the Mumbai blast case, and in 2012 and 2019. The recent amendments have brought under the ambit of UAPA wider coverage of the Act, and designation of an individual as a terrorist. However, the spirit of the Act is to proceed against any individual or activity prejudicial to the territorial integrity or sovereignty of India.

India is a stable democracy and by hyping up cases of terrorism we are actually doing disservice to the foundation of our police system which has strived hard to maintain peace and law and order. The UAPA needs to be discussed at the upcoming director general of police’s conference. The law should be used in rare instances.

Unless any act that directly promotes violence against the state using bombs and weapons, UAPA should not be resorted to. The Delhi high court gave bail to Devangana and Natasha in the Delhi riots case stating that prima facie the case was not made out. Why can’t other courts too, take a decision at the time chargesheet is filed or even earlier at the investigation stage, if the case does not stand at all.

Which brings us to the question of protest by the Opposition to the President of India against Swamy’s death. In 2008, while amending the Act, the UPA government introduced restrictions on bail for the first time. Then home minister P. Chidambaram said that it was a conscious decision to make bail difficult. If legislators feel that the law is too stringent then why don’t they spend more time delving over the provisions of the Bill while it is being passed.

Also read: Bhima Koregaon Case: Trying Without a Trial Is the Intent of Draconian UAPA Law

The death of Swamy is also attributed to the negligence of the prison administration. For a person suffering from Parkinson’s disease, even daily existence is not easy and surviving in a prison is doubly difficult. It was incumbent upon the jailor to give extra attention to Swamy with respect to his hospitalisation and other needs. Jails are managed at the top level by an IPS and an IAS officer in the Secretariat. Barring some IPS officers who have taken great interest in reforming prison administration, it is the most neglected area of state administration. It’s largely due to the massive numbers of inmates, paucity of staff and an infrastructure which is primitive and low on funds. Unless the numbers in jails are drastically reduced by a well-planned committed action, prisons will remain the same.

The judiciary will have to take an urgent lead in resolving the mess in prisons. The Supreme Court is already aware of the issue and often referred to the growing number of undertrials in the prisons with a sizeable number having spent more than half of the punishment time prescribed for their offence.

Lastly, why the courts did not give bail to Swamy on medical grounds will remain a puzzling issue. This, along with the delay in providing a sipper or moving him to the hospital, will be the saddest chapter of this painful saga.

The circumstances surrounding Father Stan Swamy’s death ahead of a bail hearing has shaken up the human right defenders. With UN human rights chief Michelle Bachelet expressing concern at the demise of the Jesuit priest, as per media reports, India may face more heat from the global fraternity. Meanwhile, the US Commission for International Religious Freedom (USCIRF) has already downgraded India on the quality of its human rights.

Further, only a few weeks ago, the country had to refute concerns raised by UN Special Rapporteurs about the protection of the right to freedom of opinion and expression and the right to privacy due to the new IT rules. As an aspiring superpower in this digitally exposed world, India needs to walk the talk and set better examples in upholding fundamental rights and human dignity.

We will never know if Father Stan Swamy could take one last look at the fleeting world while being removed to the Holy Family Hospital. At a forlorn dark corner of the Taloja cell, the frail and ailing octogenarian waited for a chance to defend himself for months. With his demise in pre-trial detention, key institutions failed in opaque darkness. One merely hopes that his demise delineates the urgency of system reformation and torments the conscience of the criminal justice system for long.