Despite the administration's claims that normalcy has returned to the erstwhile state, the 33-year-old ban on Muharram processions continues to remain in place. 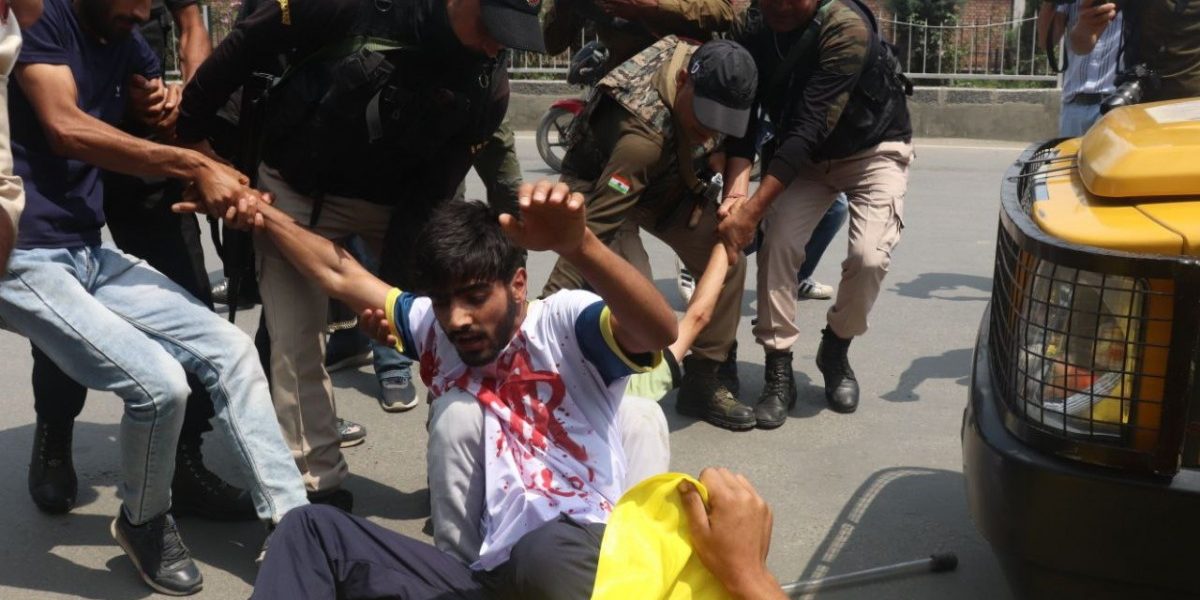 The Jammu and Kashmir police apprehending a youth for flouting prohibitory orders on the eighth day of Muharram, August 7. Photo: Sameer Hussain.

Srinagar: Curfew-like restrictions were imposed at the city centre, Lal Chowk, and other parts of Srinagar city by the Jammu and Kashmir government to foil the eighth-day Muharram procession, a practice that has been going on for decades to enforce the ban.

On the morning of Sunday, August 7, Srinagar city bore a deserted look as the administration has imposed strict restrictions and several roads were blocked with barricades and concertina wire to prevent people from gathering.

Restrictions were imposed in areas falling under the jurisdiction of Shaheed Gunj, Maisuma, Kothibagh, Batamaloo, Ram Munshi Bagh and Karan Nagar police stations. The roads leading to the city were blocked with the concertina wire and hundreds of Shia mourners who tried to defy the restrictions were detained. 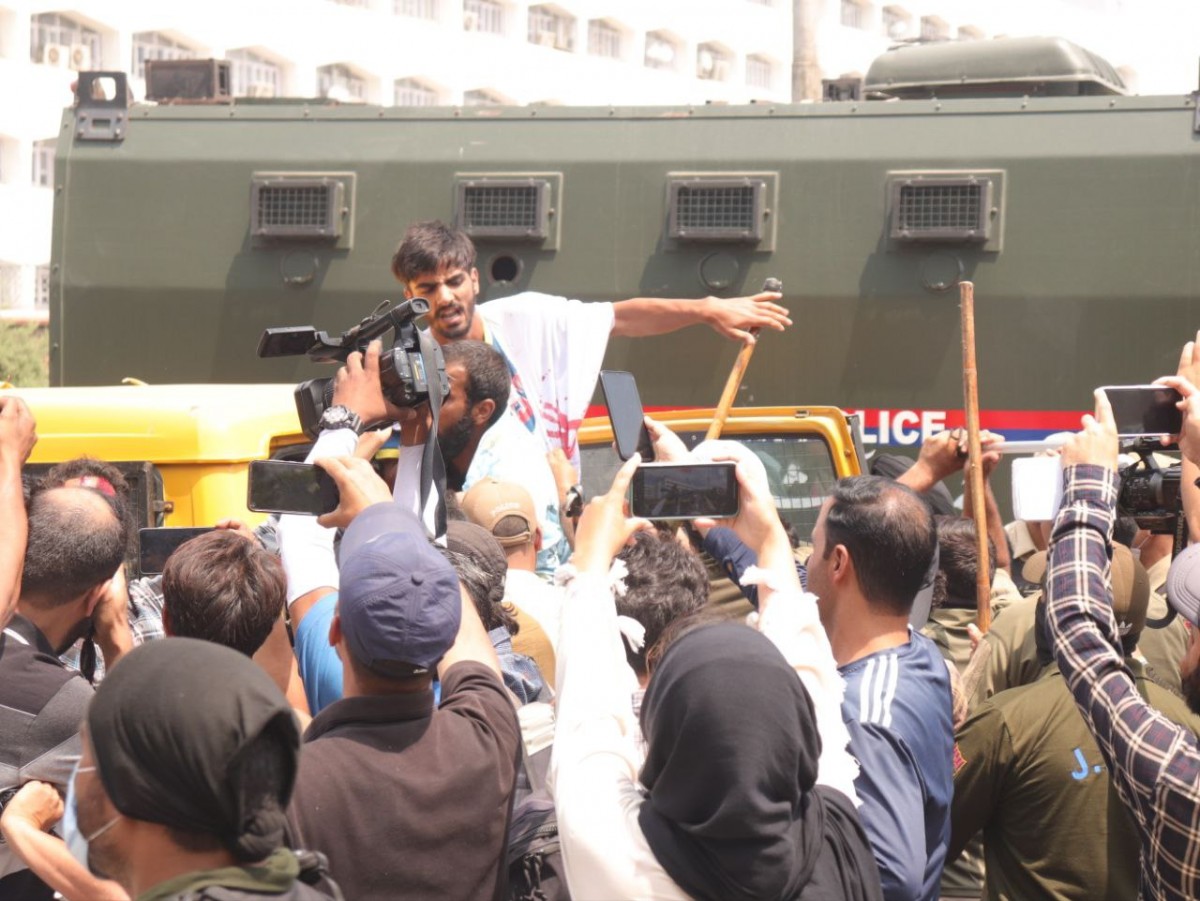 In the past, clashes have been witnessed between mourners and security forces during these processions, particularly in Srinagar.

The two major processions, on the eighth and tenth days of Muharram, were banned in 1989 by the erstwhile administration, citing ‘anti-India sentiments’. Since then, no processions have been allowed. What’s more, despite the government’s claims of “normalcy” in the region on all other fronts, these bans were never lifted.

Talking with The Wire, Arshid Ahmed, a Shia mourner, said that the ability to practice one’s religion is a fundamental right and it is the responsibility of the state government to allow the Muharram processions.

Only days prior, the Bharatiya Janata Party (BJP) held a bike rally in the Lal Chowk area and people suffered immensely because they did not know that the rally was going to take place. Yet, the traditional Muharram procession, which is a fundamental and religious right of the Shiite community, remains banned despite 33 years having passed.

“In contemporary times, the ‘step-motherly’ treatment of Muslims is unacceptable and the government should reconsider the decision on Muharram bans. This minority bears the brunt of the repression, even though other religious pilgrimages are permitted with full security and pomp,” Arshid told The Wire.

Mourners have consistently violated curfew orders and faced police batons and thrashings. Since the reading-down of Article 370 in 2019, 15 Shia mourners, including a prominent preacher, Manzoor Ahmed Malik, have been booked under the stringent anti-terror law, the Unlawful Activities (Prevention) Act (UAPA), for allegedly chanting free Kashmir slogans during Muharram processions.

In view of the “larger public interest and safety of the citizens,” the deputy commissioner of police, who is also the district magistrate, had issued an order ahead of Muharram, saying, “Because of the facts and circumstances read in conjunction with the reports of intelligence agencies thereof, more particularly the security concerns of the district Srinagar concerning Muharram, the processions therein cannot be allowed on the Gurubazar toward Buchwara (Dalgate) and Abi-Guzar towards Zadibal routes respectively, keeping in mind the public interest, law and order, and security.”

Ghulam Mohammad (42), another Shia mourner, told The Wire that the state has yet to provide any concrete reason for imposing the restrictions. “The state must have some concerns, but they have not been able to clear them,” he said.

During the pre-militancy years, the procession on the eighth day of the month of Muharram would begin at Abi Guzar in Lal Chowk and pass through the heart of the city, ending at Zadibal. “The Sunni community would provide drinks and food to the Shia mourners whenever the procession passed through their areas,” Mohammad added.

The eighth-day Muharram procession is managed by the Jammu and Kashmir Ittehadul Muslimeen, a leading Shia religious and political organisation. Its spokesperson, Syed Muzzafar Rizvi told The Wire that the organisation had filled a petition in the Jammu and Kashmir high court in 2008 regarding the ban on the procession from Jehangir Chowk to Delegate, and that court had directed the government to allow the procession.

“We are protesting and condemning this ban but no one is listening to us. If the government can allow other religions to perform their religious rites, why ban the Muharram procession?” Muzzafar asked.

The Srinagar police stated that Sunday’s Muharram procession from Guru Bazar to Dalgate has not been allowed this year either and that restrictions would remain in force. While police said that inconvenience while travelling is regretted, the measure is meant to ensure the eighth day of Muharram free from violence, as the day has, historically, seen violence.

The situation has remained normal so far. Sporadic instances of individual youths attempting to come out on prohibited routes were witnessed, and they were taken into preventive custody.

Senior superintendent of police (SSP), Srinagar, Rakesh Bakwal said that Muharram processions were held peacefully across the district with the attendance of devotees in large numbers. He said that there was excellent cooperation between Shia devotees and the police.

“The police didn’t use force anywhere today. I guess it would be for the first time that not even a single tear gas shell has been lobbed till now and no lathi charge took place at all to restrict the Muharram processions,” he said.

However, 24-year-old mourner Arif Hussain told The Wire, “When I was about to reach Lal Chowk, I was stopped by the police. They didn’t allow me in so I defied the restrictions and chanted ‘Labaik, Ya Hussain’ (an expression generally associated with commemorating Muharram).”

“Police prevented me from moving ahead, they hit me with batons and detained me without any reason. It’s our religious duty to carry out a Muharram procession,” Hussain continued. 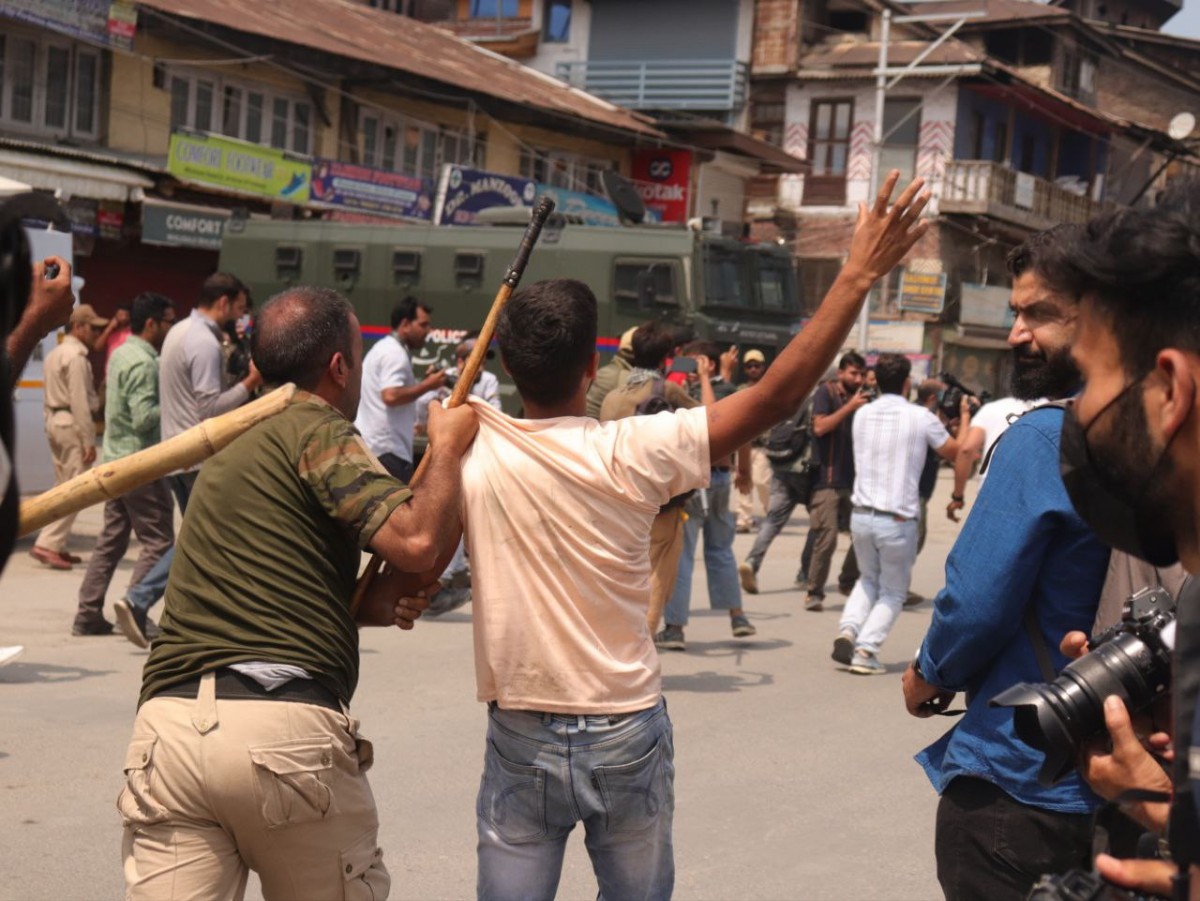 A protester being dragged away by the police. Photo: Sameer Hussain.

Jammu and Kashmir Ittehadul Muslimeen president, Masroor Abbas Ansari, lamented that the government has banned the eighth-day procession again, despite the organisation’s assurances. “We assured the government that nothing will happen during the procession. If the government can facilitate the Amarnath Yatra pilgrimage, why can’t they provide security for the procession? It’s a brazen attack on the right to freedom of religion, ” he said.

Also read: Backstory: Why Was the Media So Eager to Put the Amarnath Yatra Tragedy Behind Them?

Reacting to the government ban, a Srinagar-based lawyer, on condition of anonymity, told The Wire, “The restrictions imposed by the government on the Muharram procession seem unethical and unjustifiable, having no solid ground. The administration, by imposing such a ban, is not only violating the fundamental rights of the individual but also of the public at large. This is a brazen attack on the religious freedom of the Shiite community.”

He too brought up the point of the 40-day Amarnath Yatra, asking why the government couldn’t provide security for one day for the Muharram procession.