'Speaking Up Is Not Anti-National': Global Groups Condemn Attacks on India's Rights Defenders

'Every single government authority, whose job it is to safeguard human rights, has actively undermined them.' 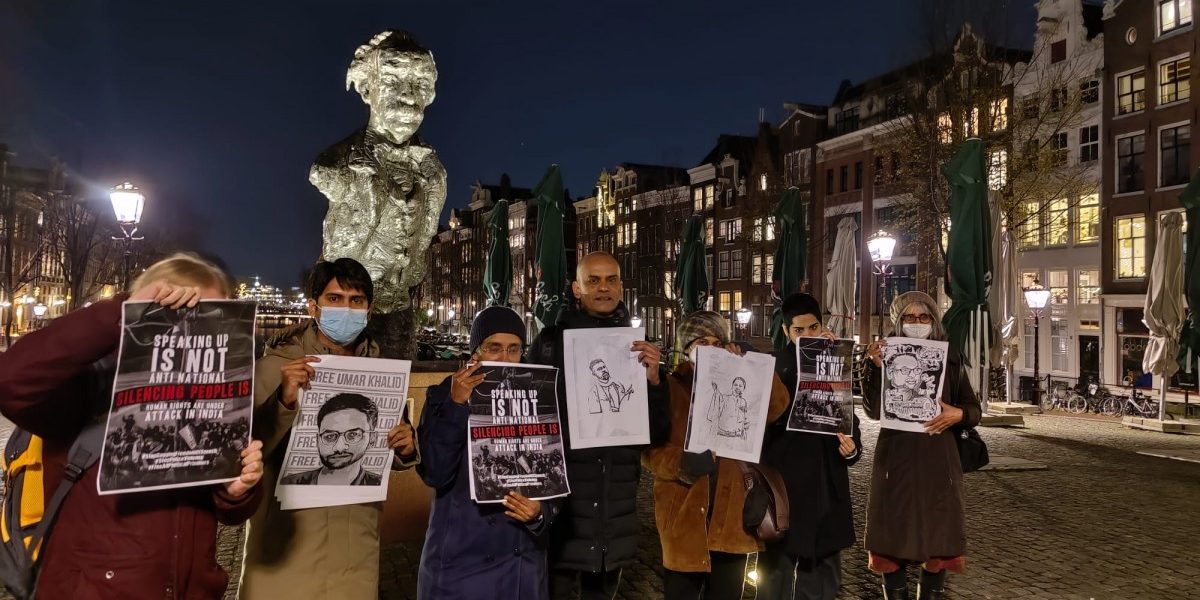 New Delhi: The Indian diaspora and 30 international human rights groups across over 15 countries on Friday – on the occasion of Human Rights Day – came together for a global campaign to condemn growing attacks on human rights in India. In a statement, they advocated for the repeal of laws that are criminalising the defence of human rights and jailing human rights defenders in the country.

Posters saying “Speaking up Is Not Anti-national, Silencing People Is!” were displayed in numerous cities around the world including Paris, Sydney, Melbourne, Kuala Lumpur, Cape Town, Tokyo, New York and Amsterdam.

Explaining why this common slogan is needed, Alena Kahle from Foundation The London Story, based in the Hague, said in the statement: “We find it empowering to see so many members of the Indian diaspora, and even partners and allies, come together to make this strong statement. We are raising our voices as Indian diaspora and allies to highlight that India – just like every country – needs a free press, and needs youth, Dalit, Muslim and all kinds of activists, because we can only guarantee the best possible world for all if everyone can speak.”

Speaking on the importance placed on global solidarity by Amnesty International, Michael Gottlob from the India Coordination Group at Amnesty Germany, said, “The utopian idea of solidarity across boundaries still inspires millions of Amnesty activists from many countries in the world. That’s why we are glad to join the common protest on human rights day. Let’s make sure that the world is watching India – as Indians are watching the world. So that the movement for human rights will become truly global.”

Haroon Kasim, co-founder of The Humanism Project based in Australia, said, “We stand proudly as Indians who will speak out loudly against any efforts to compromise or threaten India’s proud history of diversity, inclusiveness or her democratic values. Governments will come and go but we remain committed to standing up and protecting India’s proud multicultural, multi religious, multilingual and democratic ethos. We will not have it any other way”. 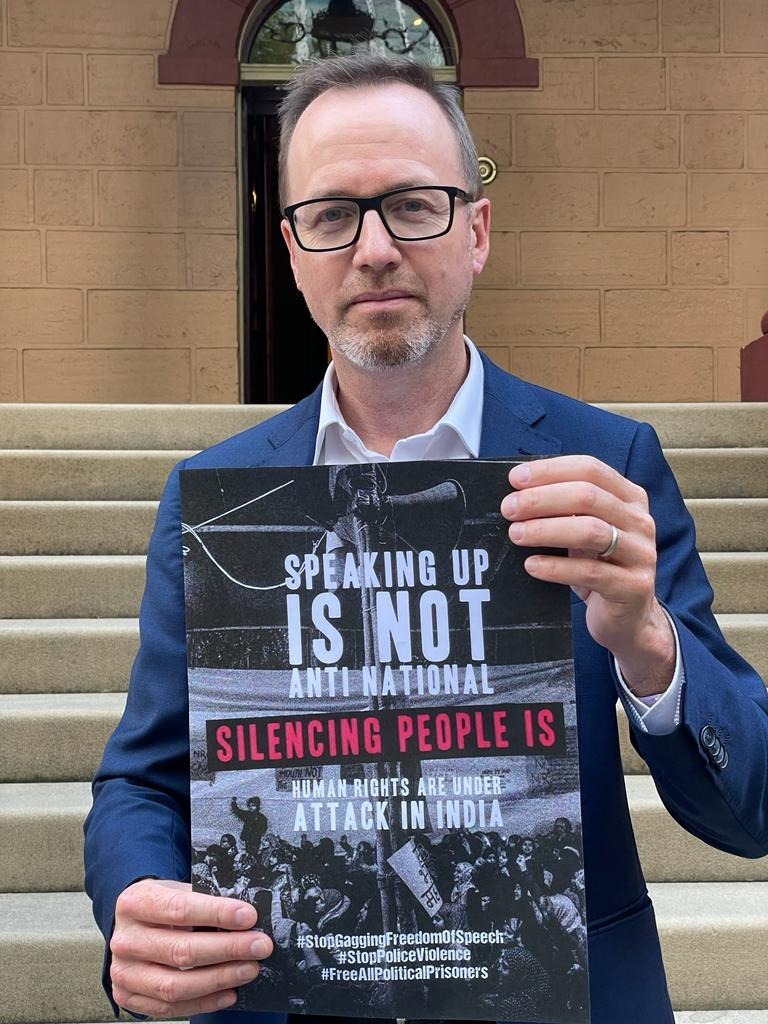 A participant of the campaign in Australia, condemning attacks on human rights defenders in India. Photo: The Humanism Project

“India and the rest of the world called for the release of Nelson Mandela, jailed for 27 years on Robben Island, off the coast of South Africa, by another oppressive regime. South Africans are all too familiar with state repression, plight of political prisoners, violation of human rights and the value of international solidarity. We believe that an injury to one is an injury to all. We call for the Indian government to stop criminalising human rights advocacy. Repeal the UAPA (Unlawful Activities (Prevention) Act). Stop detention without trial. Cease persecution of dissenters. Respect human rights, rights to freedom of speech, belief, and association. Disagreeing with the dominant party’s ideology and policies does not make an individual a criminal,” Usuf Chikte from South Africa, on behalf of People Against Apartheid and Fascism.

A spokesperson from US-based India Civil Watch International voiced concerns over the alarming institutional decline in India with respect to human rights. “Every single government authority, whose job it is to safeguard human rights, has actively undermined them. Narendra Modi, Amit Shah, NSA Ajit Doval, CDS Bipin Rawat, and even the National Human Rights Commission itself have made statements that attack the very concept of human rights and the organisations that work to uphold them. Given this toxic atmosphere within India, it is crucial for the diaspora to raise their voice against this dangerous backsliding.” 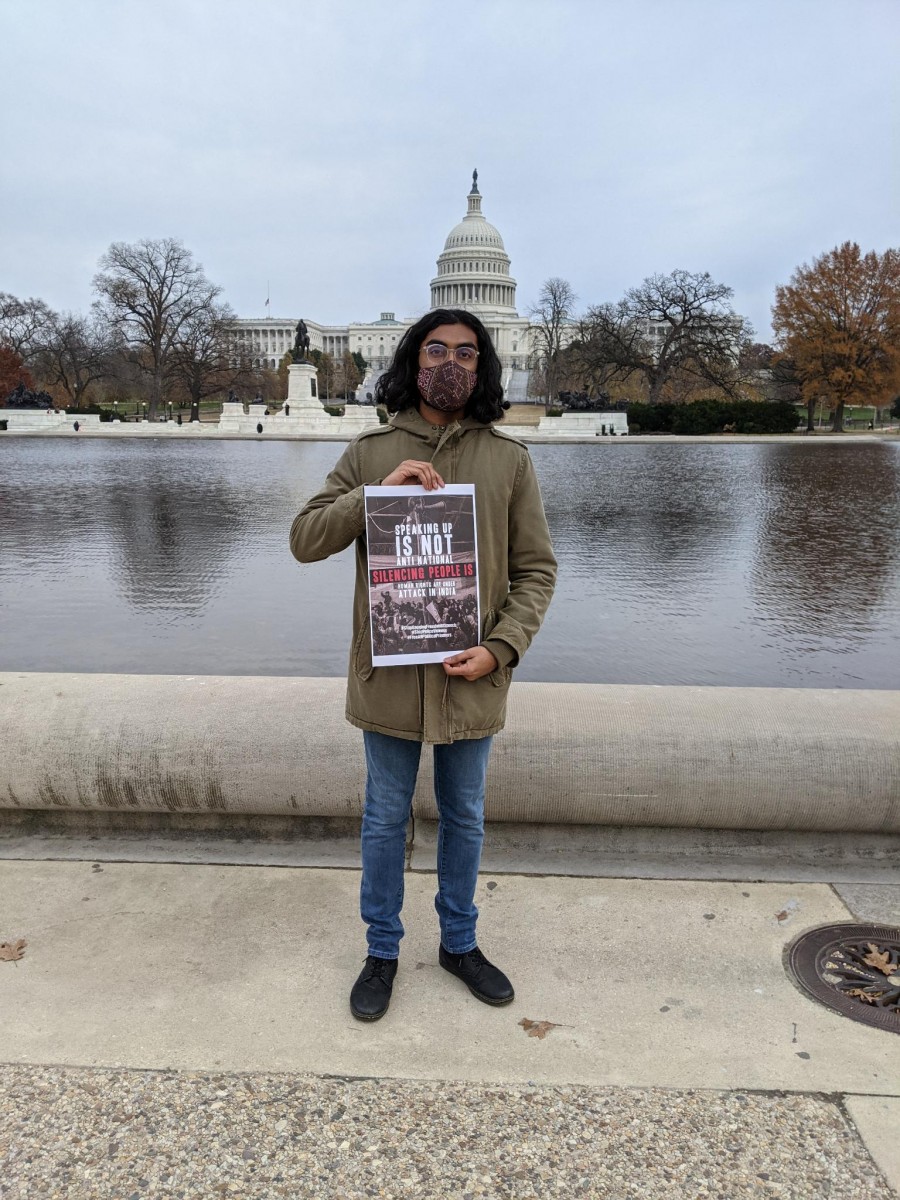 A photo of the campaign in Washington D.C., condemning attacks on human rights defenders in India.

The list of organisations that participated in the campaign and released the statement are as follows: