Over 8,500 Signatories Accuse JNU Admin of Being 'Complicit' in January 5 Attack

The signatories demanded that JNU's registrar and vice chancellor take "moral responsibility" for their failure to guarantee the safety of their students and faculty members. 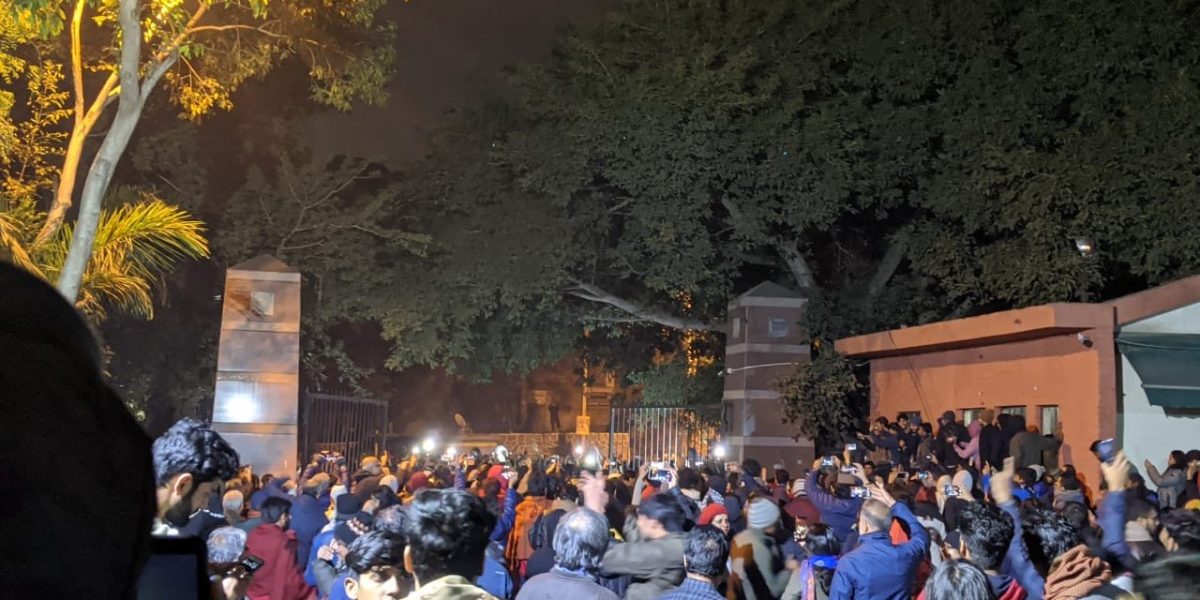 JNU gate stormed at 1 am. Photo: The Wire

New Delhi: Accusing ‘masked goons’ of perpetrating a ‘culture of fear’ by attacking students and faculty members of JNU, a solidarity statement endorsed by more than 8,700 people said the events of January 5 led them to the ‘forced’ conclusion that the university’s administration and the police were “complicit in facilitating the attack”.

The statement was initiated by scholars based in India and abroad, who were “shocked by the events that unfolded” on the JNU campus. The signatories said there was “a complete breakdown of campus security”, asking why masked attackers were allowed to freely walk all across campus and “systematically go from one hostel to another intentionally searching for students involved in the protest against the fee hike”.

They also criticised the JNU administration for its “extremely slow” response even as students reported continued violence. They also questioned why the police did not take any action against the attackers and why the street lights on the road leading to the JNU main gate were switched off.

“At a time when protests all over the country are emphasizing the need to protect the Indian Constitution and the basic principles of liberty, equality and the right to freedom of speech, the unprecedented attack on JNU students and faculty is unacceptable,” the said.

The signatories demanded that JNU registrar Pramod Kumar and the vice chancellor Mamidala Jagadesh Kumar take “moral responsibility” for their failure to guarantee the safety of their students and faculty members. “Such a total breakdown in campus safety is unconscionable,” they said, asking that the injured receive prompt medical aid and a fair and impartial inquiry be conducted into the events of January 5 to hold the perpetrators accountable.

Solidarity Statement condemning the attack on the Students and Professors of Jawaharlal Nehru University, New Delhi on 5 January 2020

As teachers, researchers, students and concerned individuals in India and abroad, we strongly condemn the attack by masked goons (allegedly belonging to the ABVP) on unarmed JNU students and faculty on the evening of 5 January 2020 with rocks and rods while the police looked on.

Timeline of the attack and context:

The JNU students have been on strike over the past few months against a steep fee hike, which will make the university inaccessible to the economically and socially marginalised sections. The unprovoked violence on the protesting students was started by the JNU security staff on January 4, who were ordered to break the strike. Later in the day, some ABVP activists were caught on camera attacking the protesting students. It was against this violence that the JNU Teachers’ Association had given a call for a peace meeting on campus on January 5, 2020. While the meeting was taking place, a group of masked goons from outside the campus started attacking the peacefully assembled students and teachers with rods and bricks. Eyewitnesses interviewed on NDTV suggest that more than 50 armed goons entered the campus around 6:30 pm.

There was a complete breakdown of campus security on January 5. Masked attackers were allowed to freely walk all across campus and systematically go from from one hostel to another intentionally searching for students involved in the protest against the fee hike. Videos have emerged from specific hostels with broken windows, showing large stones thrown around, and cars vandalized by masked goons. They entered women’s hostels even as campus security stood by silently.

News media is showing horrifying images of the attack on the JNUSU President, Aishe Ghosh — visibly bleeding and seriously injured. Currently, thirty students and thirteen faculty have been injured and are in the trauma centre of the All India Institute of Medical Sciences (AIIMS). At least three of them including Ms. Ghosh are reportedly in critical condition.  Media shared images of at least one faculty member, Professor Sucharita Sen who was also attacked and suffered head injuries.

Campus lock down and slow response of university administrators:

Throughout the shocking attack, the JNU administration was extremely slow to respond even as students reported continued violence. Videos emerged from JNU showing very little visible presence of the police while the attack was underway. The Registrar of JNU issued a statement only at 9 PM, two hours after the attack had begun. The Vice Chancellor at the time of writing this statement has done little to reassure students or faculty of their physical wellbeing.

Why such violence? And why now?

JNU is a premier research university with a long history of inclusive admissions policies and a questioning academic culture.  This attack has come twenty-three days after the police violence in Jamia Millia Islamia University, Aligarh Muslim University, and Cotton College against students and those peacefully dissenting against discriminatory policies of the government in India.

Instead of police, this time masked goons are deliberately creating a “culture of fear” on public university campuses. Except for one NDTV reporter, media was not provided access into the university. Yogendra Yadav, President of the Swaraj party, was stopped from entering the campus and was attacked for speaking to the media. Street lights were turned off outside the North Gate.  Police inaction at JNU on January 5 enabled the attackers to proceed unhindered.

Public university campuses offer a safe, unarmed space for debate, discussion and learning for students from diverse regional and class backgrounds. They are the lifeblood of democracy.

At a time when protests all over the country are emphasizing the need to protect the Indian Constitution and the basic principles of liberty, equality and the right to freedom of speech, the unprecedented attack on JNU students and faculty is unacceptable.

We are forced to conclude that the administration and the police were complicit in facilitating the attack.

We stand in solidarity with our colleagues, students and faculty at JNU.

Below are names of some prominent people who have signed the statement. Click here for the full list.