SKM leaders said the horrific incident was related to sacrilege and the violation of a sacred scripture. 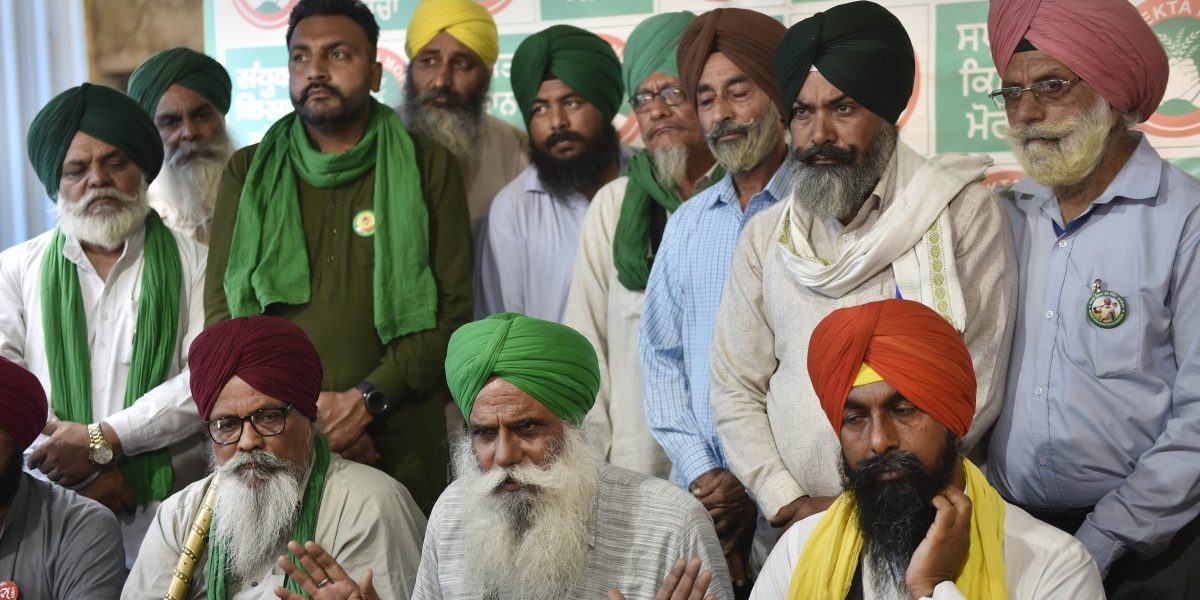 Jalandhar: The Samyukt Kisan Morcha’s leaders have termed the gruesome killing of a man at the Singhu border a “religious issue” and said it was a conspiracy by agencies to defame and derail the 10-month-long farmers’ protest against the agricultural laws.

The incident took place at around 5 am, after which some videos in which the victim was seen tied to a barricade with his left hand chopped off and leg broken, went viral. In related footage, a group of Nihangs – members of a Sikh warrior group – were seen questioning the helpless man lying in a pool of blood, while he was trying to respond.

One of the accused Nihang men, Sarabjit Singh Bhau is learned to have surrendered. Haryana police has taken him into custody.

The victim has been identified as Lakhbir Singh (35), son of Darshan Singh of the village Cheema Kalan in Tarn Taran district. The village is under the jurisdiction of the Sarai Amanat Khan police station.

A case under sections 302 (murder) and 34 (acts done by several persons in furtherance of common intention) of the IPC was registered against unknown persons by the Sonepat Police.

Deputy Superintendent of Police (DSP) Sonepat Satish Gautam said that investigations had begun on the case. The post mortem of the victim’s body is being carried out at the Civil Hospital, Sonepat.

Expressing shock over the crime, farmers’ union leaders said that both the parties in this incident – the Nihang group and the deceased person have no relation with the SKM. The SKM leaders said that their protest was against the three farm laws but this horrific incident was related to sacrilege and the violation of a sacred scripture.

Senior SKM leader and president of BKU (Sidhupur) Jagjeet Singh Dallewal, who led a meeting of farmers’ union leaders in the day and later held a press conference, said, “We strongly condemn the barbaric killing of the man and the sacrilege incident. But we demand a thorough probe from the government in this case to ascertain that why and how it happened. Strict action should be taken against the accused who are behind this conspiracy and murder, as many such cases have taken place at the farmers’ protest earlier too,” he said. 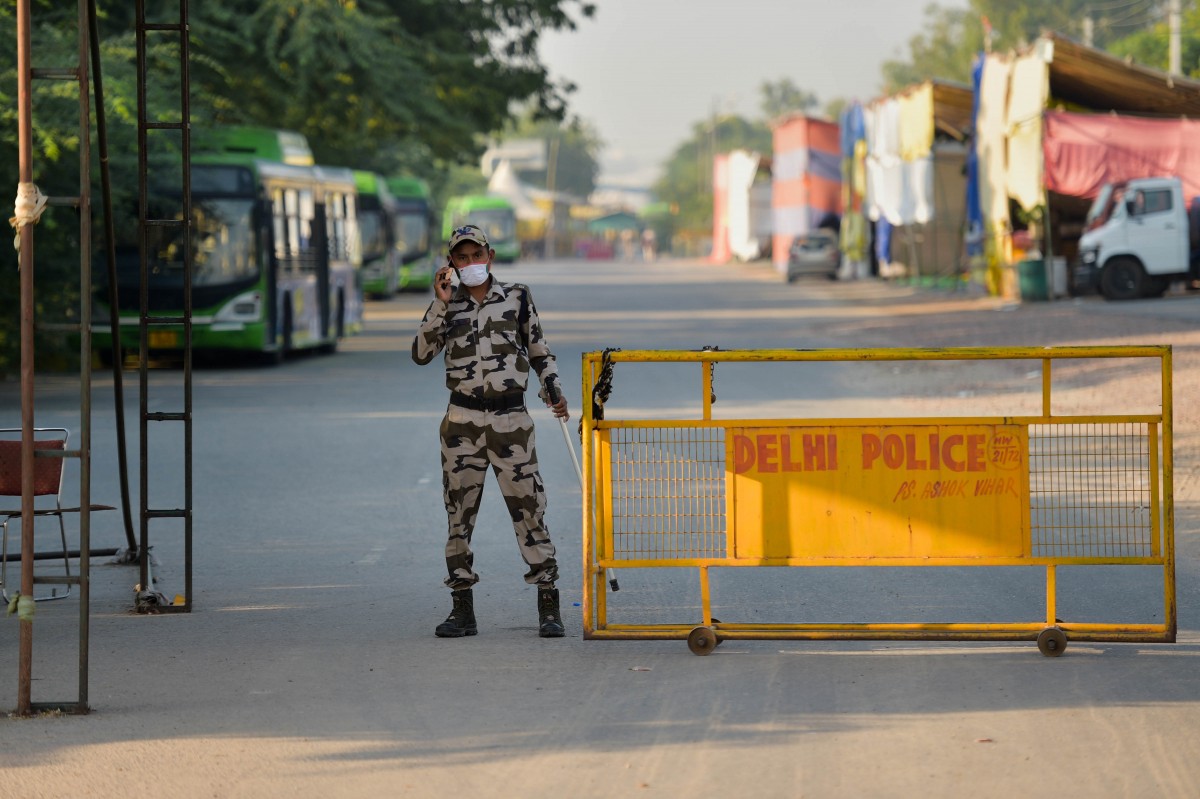 A security person at Singhu Border near the site of the farmers protest, in New Delhi, Friday, Oct. 15, 2021. Photo: PTI

Dallewal said that an attempt is being made to make farmers’ protests a ‘religious issue’.

“A barbaric incident and sacrilege happening in farmers’ protest somehow hints at a conspiracy. That is why we have demanded a probe from the government,” he said.

He said that soon after they learnt about the incident, a group of farmer union leaders met the Nihangs in the morning.

“The Nihangs told us that the victim took their Sarbaloh Granth to a dirty place. Some Nihangs followed him. When the Nihangs reached, they found the Granth at an indecent place, leading to the incident. In fact, it could be an internal matter of the deceased and the Nihangs too, as Lakhbir used to stay with them and even dress up like a Nihang. We have also asked our volunteers to check all the CCTV footage to track the crime,” Dallewal added.

The Sarbaloh Granth translates to “scripture of wrought iron” and contains the writings of Guru Gobind Singh. It is separate from the Sikh holy book, the Sri Guru Granth Sahib.

On being asked about Nihangs sitting at Singhu border and whether SKM was keen to not take responsibility, Dallewal said that this is a global farmers’ protest and thus various people were participants in it.

“We have different groups and people from different ideologies and communities at the protest. There are farmers’ unions, Sikh groups, different langars, Hindus and Muslims, who have been taking part in the protest. Muslims even observed Roza at Singhu border, so this crime can’t be attributed to all farmers,” he emphasised.

He also asked why the victim was not taken to the hospital in time. “People were told that it was a sacrilege case and an attempt was made to make it a religious incident,” he added.

SKM leader Ruldu Singh Mansa also said that like the 40 farmers’ unions under the SKM, even the Nihangs have 32 groups at the farmers’ protest. “We will hold a meeting to find out which group was responsible,” he said.

In a video message, farmer leader Baldev Singh Sirsa also demanded a probe into why and when Lakhbir Singh came to Singhu border.

“Since December 2, 2020 to date, many conspiracies have been planned by the government to fail the farmers’ protest. We got FIRs registered in many cases – men, women, displays of muscle power and even fire incidents also took place. This entire incident should be thoroughly probed,” he said.

Earlier, sharing the details of the victim, DSP (City) of Tarn Taran, Sucha Singh, said that the victim Lakhbir Singh used to work as a labourer. “As he was a drunkard, it disturbed his married life. His wife deserted him seven months ago and took her three daughters along. The villagers also shared that Lakhbir used to be idle most of the time. He was the only person from his entire village who went to the Singhu border. After reaching there, he started living with the Nihangs,” Singh said.

Last year during nationwide COVID-19 lockdown, Nihangs had chopped off the hand of an Assistant Sub Inspector (ASI), when he was on duty at a police naka. Six policemen had also sustained injuries in the incident.

ASI Harjit was rushed to PGI Chandigarh, where his hand was reattached after a seven hour-long surgery. Following the crime, police had arrested seven Nihangs, recovered Rs 39 lakh in cash, along with petrol bombs, spears, swords, weapons and poppy husk from them. The incident had received criticism from across the country.

In March this year, two Nihangs were shot dead by Punjab Police after they attacked police with swords and spears in Tarn Taran district. A clash had taken place after a police party went to arrest wanted Nihangs who had been on the run from Maharashtra.

Nihangs are an armed Sikh warrior sect of Sikhism, known for their historical bravery and ruthlessness in battlefields.

They are distinctly identified at gurdwaras, religious congregations and fairs by their electric blue, knee-length robes (Khalsa Swarup), along with yellow, orange or blue turbans, flowing beards and sometimes, black sunglasses. Nihangs follow beliefs and practices separate from Sikhs and carry swords, kirpans, katar (dagger), and chakrams. Their style of wearing the turban is also different from the way Sikhs regularly wear turbans.

Nihangs played a major role during the Afghan-Sikh wars that took place during Maharaja Ranjit Singh’s rule, particularly against the invasions of Ahmad Shah Abdali.