A District Magistrate's court has given orders to remand Souradeep Sengupta in judicial custody at Central Jail until Monday.

New Delhi: A 25-year-old guest lecturer at Assam’s Silchar has been arrested by Cachar Police and remanded in judicial custody till Monday, after members of rightwing groups lodged an FIR against him for “making a derogatory remark against Sanatan Dharma” on Facebook.

Souradeep Sengupta, who had been applying for PhD positions in physics while teaching at the city’s Gurcharan College, had posted on Facebook on the situation in north east Delhi. In them, he blamed Prime Minister Narendra Modi as having been responsible for the situation.

In a separate post, he shared another person’s account of purported rightwing terror with a caption alleging that “Hindutva is cancer.”

Screenshots of Sengupta’s posts uploaded by rightwing activists. The highlights are theirs.

By evening on February 27, Sengupta’s friends and family began noticing an outpouring of vitriol against him online. “He had begun receiving threats on social media. Many of them were from members of the ABVP, who were also making individual posts calling for action against him for these posts that he had made on the next day [February 28] at the college campus itself,” said a relative of Sengupta’s who was initially named but requested anonymity.

Uneasy with the threats, Sengupta decided to skip college that day. In the morning, college students, who could be members of ABVP, submitted a memorandum to the principal, calling for Sengupta’s immediate resignation.

Students then held an impromptu protest on campus itself where they raised slogans like ‘Vande mataram’, ‘Bharat mata ki jai’ and referred to action they are going to take against ‘traitors’. The video below, of the demonstration, was shared by Rohit Chanda who identifies himself both as an RSS swayamsevak and the ‘development in-charge’ for ABVP’s Silchar unit.

At around 3 pm, says the relative, a mob of nearly 40 men from rightwing outfits had gathered at Sengupta’s house. At that time neither Sengupta, nor his father were at home. The only remaining member, his mother, opened the door, only to have the crowd barge into the house.

“They were loud and kept on asking what kind of Hindus they were, if there were no photos of gods on their portico. They refused to leave until he made a Facebook Live video, apologising to everyone for his comments. His mother, who by then was pretty nervous, agreed. Souradeep too had been informed of what was going on, and he rushed back home,” said his relative.

However, police picked him up just as he was about to enter his house. “At that time, they said they were only taking him for his own protection, from the mob that had gathered outside,” said the relative. 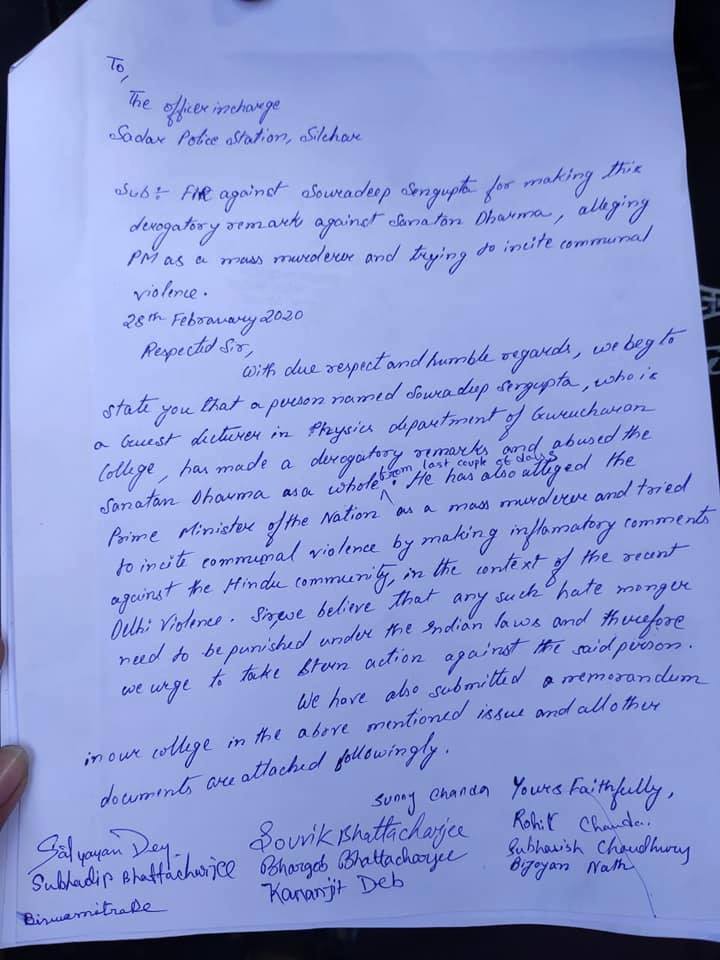 His friends and family reached Sadar police station to find that the rightwing activists had gone there too. Police reportedly asked the two parties to come to an understanding first.

“The rightwing activists sent two people to us who identified themselves as ‘former ABVP members’. They gave us a list of demands, which kept on altering as time passed. By the time it was 9 pm, they had asked us to convince Souradeep to kneel down and beg for their forgiveness. The minute he agreed, they left en masse. Perhaps they realised that he would have to be kept in confinement if no understanding could be reached,” said the relative.

While noting that police officers were never rough with Sengupta or his family and friends, his relative said that police registered the FIR against him at around 9 pm.

A report by Indian Express quotes the Cachar superintendent of police Manabendra Dev Ray as confirming his arrest.

Sengupta has been booked for non-bailable offences under sections 295A and153A, and the bailable offence of criminal intimidation under Section 507 of the Indian Penal Code.

He has also been booked under Section 66 of the IT Act, which has been struck down by the Supreme Court. The Wire has done reports on police’s wilful ignorance of the judicial pronouncement.

In the copy of the complaint [top right], it is visible that in addition to calling him a “hate monger” for his Facebook post, the 10 complainants cite that he abused “Sanatan Dharma as a whole.” Sanatan dharma is understood to refer to the entire set of religious duties that are to be executed by Hindus.

It is not clear if all 10 are current students of Gurcharan College.

Sengupta spent the night in the lock up. At around midnight, the following ‘apology’ appeared on his Facebook account. The posts which had caused the outrage in rightwing groups had been deleted.

The District Magistrate’s court, where he was produced at around 4 pm on Saturday, will announce his bail decision on Monday. It gave orders for Sengupta to be taken to Silchar Central Jail for the term of his judicial custody.

Members of rightwing groups, meanwhile, have been quick to celebrate Sengupta’s detention. Chanda himself was among them. 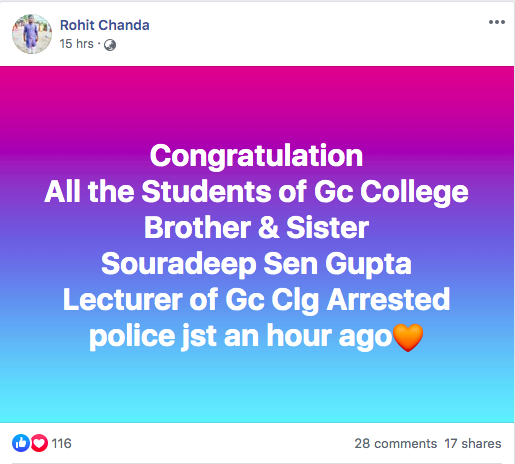 Both Chanda and Karanjit Deb who identifies himself as the Silchar city secretary of ABVP and has been equally celebratory on Facebook, have been sent questions. Both are also signatories to the police complaint. Notably, rightwing activists’ screenshots of Sengupta’s original posts are still doing the rounds on Facebook, even though the originals have been deleted. It is likely that even with Sengupta’s posts having been set to ‘public’ and the 3000-odd people who followed him on Facebook, his posts would have reached fewer people than they have reached now.

This story will be updated when Chanda and Deb reply.

Several commenters in the posts uploaded by the rightwing complainants have sought to highlight Sengupta’s Bengali roots.

Family and friends of Sengupta’s who The Wire spoke to said not only have the scholar and his family lived in Silchar all their lives, their extended family have been residents there too. Alumni of two of the universities Sengupta attended, Presidency University in Kolkata and Delhi University, have campaigned online for his early release, in addition to condemning the incident.

A former classmate of Sengupta’s at Presidency, Preetha Sarkar told The Wire that he was always politically aware but polite. “In our last year at Presidency he was the assistant general secretary of the Student Union. He stood as an independent candidate in the elections. The only other person who was contending for the post dropped out of the election because he didn’t want to ruin his friendship with Souradeep, so he got the unanimous vote. Souradeep is probably one of the least likely people who would want to hurt people of any religion,” said Sarkar, a physics scholar.

The arrest over a social media post in a BJP-ruled state is the latest in a series with precedence. In February itself, Jammu and Kashmir police arrested a Imtiyaz Ahmad Kawa from Srinagar, after he accused the armed forces of vandalism in Kupwara district of north Kashmir on Facebook.

In this month itself, a trader was arrested in Greater Noida, of Uttar Pradesh, for allegedly sharing a Facebook post deemed “offensive” against Uttar Pradesh chief minister Yogi Adityanath.

Note: The article has been updated to remove the name of Sengupta’s relative who later asked for anonymity.