‘This Is the Second Assam Agitation’: Ethno-Nationalist Leader Shrinkhal Chaliha

The Veer Lachit Sena leader speaks to The Wire about his arrest during the CAA protests and the path ahead for his group. 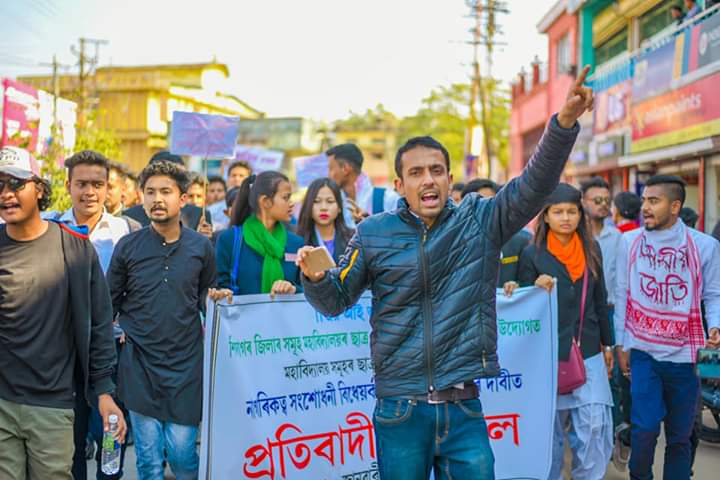 Guwahati: Shrinkhal Chaliha is the leader of one of several Assamese ethno-nationalist groups which have been leading a string of fiery protests against the controversial Citizenship (Amendment) Act (CAA). Chaliha, the organising secretary of Veer Lachit Sena, is among the very few influential leaders who were detained, arrested and jailed during the protests. The 31-year-old was arrested twice in a month’s time for protesting and for ‘waging a war against the nation’. Chaliha’s house in Sivasagar district too was raided by the CID. On January 11, he was granted bail in a case registered by the CID.

In an interview with The Wire, he spoke about his arrest, his continued struggle against the BJP, his dissatisfaction with some ethno-nationalist leaders, the fate of the BJP ahead of the 2021 assembly elections in Assam and the probability of him joining politics.

How and what were the circumstances under which you were arrested twice in December?

I was arrested on December 10 from Gaurisagar in Sivasagar district. I was not informed about the reason for my arrest, but I felt it may have been because I was leading a string of protests against the government and CAA. I was returning from Guwahati and attended some public meetings organized by the Veer Lachit Sena against CAA in Nagaon, Tezpur and other places.

When I arrived at Sivasagar, I was immediately arrested and was taken to Sivasagar Sadar thana. More than 15,000 people surrounded the police station and the police was put under tremendous pressure and so I was let go. I was kept inside the thana for few hours. I was surprised that the police didn’t even speak to me.

Then on December 23, I was arrested once again. This happened at Lepetkata in Dibrugarh district. I was returning from a gana sabha (peoples’ meeting) which was organised by the Veer Lachit Sena. I was on my way to attend another meeting when Assam Police personnel arrested me. On the morning of December 24, I was handed over to the CID.

Also Read: India Needs to Understand Why the Northeast is Protesting Against CAA

Did the arrest remind you of what you faced in early 2019, when Assam erupted in protests against the Citizenship (Amendment) Bill (CAB)?

On December 10, when I was arrested, no information was shared with me on what grounds they were doing so. I was asked to sign a bail bond. Again, on December 23 I was told nothing about my arrest. I got to know the next day that I was arrested for ‘waging a war against the nation’. From Lepetkata I was brought to Guwahati via Dhemaji and at Biswanath district I had to undergo a medical check-up. From there, I was brought to Panbazaar Police Station in Guwahati. I was put inside a lock-up for the night. The next day, sometime between 8 am and 9 am, I was handed over to the CID.

This was not the first time that I was arrested. In February 2019, I was arrested for protesting against CAB. But back then, the police did inform me why I was being arrested.

After I was granted bail on January 11, 2020, the authorities tried to book me in another case, but it was quashed by the court.

What accusations and allegations were levelled against you by the CID?

The CID claimed that the violence during December’s anti-CAA protests in Assam was due to the Veer Lachit Sena. They accused me of personally instigating people to do so. I was also accused of making calls to instigate violence. The CID wanted to frame charges against me for destruction of property and for the deterioration of law and order situation in Assam. They checked my Facebook account and also my WhatsApp number. My personal cell phone is still with the CID and so is my mother’s. But the CID failed to prove that I was involved in the violence. There was no incriminatory material to substantiate that claim. My phone was seized by Assam Police when I was arrested on December 10. On the night of December 30, I was taken to the Barpeta jail. But the CID didn’t interrogate me. I was given a bed.

How did your parents cope with your arrest?

My mother is sixty years old and my father is 70. My father is unwell and is mostly bedridden. His nerves are damaged because of the torture that was meted out to him by the police in the 1980s for taking part in the Assam agitation.

The CID raided my house in Sivasagar on December 26. I come from a jatiyodabadi family and this trait is in my blood. I am not afraid of the establishment and my parents are quite proud of me. My mother came to meet me in Barpeta jail. Fighting for Ai Axom (Mother Assam) is my objective and this is what my parents told me since I was young. CAA will usher in untold misery to the indigenous people, for Assamese language and culture. I cannot let this happen and Veer Lachit Sena will not be mute spectator to this.

Krishak Mukti Sangram Samiti (KMSS) leader Akhil Gogoi, ULFA pro-talks leader Jiten Dutta and you were among the handful of leaders who were arrested for protesting against the CAA. But All Assam Students’ Union (AASU) leaders who have also been quite vocal and fiery against the amendment have not been arrested. Why do you think that is?

People of Assam know why I was arrested and not others. I protested solely for the purpose that Assam should be protected from foreigners. Firstly, I would prefer not to badmouth other prominent leaders who were equally vocal and fiery against CAA but were not arrested. At the same time, I believe a section of leaders – I wouldn’t like to name them or their organizations – are in cahoots with the government.

Many in the present government are former student leaders. There is a probability that some ethno-nationalist leaders are being compromised. I wouldn’t like to speculate on it though. But it is sad and unfortunate that some leaders claiming to be from ethno-nationalist groups mostly cater to television TRPs. Their objective is to garner television talk time in the name of protests against CAA. There is subtle competition among such leaders. They are only interested in TRPs and not in solving the crisis that Assam faces.

How is Veer Lachit Sena different from AASU, AJYCP or KMSS? Is it important for all these organizations to be united?

It was Veer Lachit Sena that took the protests first seen on the streets to the grassroots level, into the rural areas. We are being tracked by the Intelligence Bureau (IB), the CID and even RAW (for this). We are very active in the protests. People of Assam are aware of our fight. We are mostly based in upper Assam, with a strong contingent of around five lakh members. This information is with the government. That way, we are much stronger than AASU. We are not an urban ethno-nationalist group, but an indigenous ethnic group with wide support.

But most importantly, it is time that all the groups and organizations should come together and fight for the common cause. This is a regional movement and we should work together to give it a new and positive direction. On January 20, I am travelling to upper Assam and meet people to work with them on ways to add momentum to the movement. The protest against CAA marks the second Assam agitation.

Is there a probability of you floating a political front? If so, how will it be different from what Asom Gana Parishad (AGP) which was also born of an anti-foreigner agitation?

I have given it some serious thought. It is important that a political party, if I form one, should be based on Anchalik (regional) and Jatiyodabadi (community identity) ideology and thought processes. But it is a decision that should be made by the people of Assam. If people want me to take part in elections, then I will. But before that, we must learn from our previous mistakes. We must learn that if we have to travel to Lanka (refers to Ramayana), then we should return as Ram and not as Raavan. The ticket distribution of the party would have to be transparent and people of Assam should have a fair share in electing prospective leaders. We should aim at having a legislative assembly that will come together to discard the CAA. We have the power of youth and women. Women empowerment should take centre stage in this fight.

One of the many anti-CAA protests in Assam. Photo: By special arrangement.

The Centre is working towards implementing Clause 6 of the Assam Accord, which essentially means granting some constitutional safeguards to Assamese people. The committee formed by the Ministry of Home Affairs will soon submit its report. If the clause is implemented, will it not weaken the anti-CAA movement? After all, the state and Centre have been looking at implementing the Clause in lieu of CAA.

The movement will not weaken. Clause 6 was guaranteed to us (by the Centre) and no power on earth can deny us that. It is based on the sacrifices made by over 800 people who were martyred during the Assam agitation. The implementation of Clause 6 will not weaken the movement. If both Prime Minister Narendra Modi and home minister Amit Shah care so much about Hindutva politics, they should make the Hindu Bangladeshis settle in their home state Gujarat. They should spare Assam from foreigners. We will help both Modi and Shah in settling these Hindus in Gujarat.

Also Read: The CAA Widens the Gap Between the Nation and Its ‘Unintegrated Region’

Assam will go to polls in 2021. BJP state leaders have been saying that they will win the elections in spite of the protests. Do you agree?

The people of Assam will deliver a crushing defeat to the BJP. In 2019, the situation was different but now, there is a wave of opposition against the BJP.