Debate: Shashi Tharoor and the Liberal Paranoia of Muslims Asserting Their Identity

Those accusing Muslims of 'communalising' the CAA protests forget that the assertion of identity has remained alongside – not in contradiction to – the commitment towards the constitution. In response to an article in the Indian Express by journalist Irena Akbar affirming her Muslim identity in the face of statements by Shashi Tharoor and others questioning the role of ‘identify politics’ in the anti-CAA protests,  of Muslims, the Congress politician tweeted: “But protesting purely as “Muslim” facilitates the other side’s efforts to polarise opinion on communal lines. Better to strengthen the support base by appealing to all.”

Like many who have made this argument, Tharoor prefers holding on to the empty political concept of “all”, rather than acknowledging India’s real diversity, and the lived reality of a minority. Even if we compare the “all” to the idea of a “people” enshrined in the Constitution, it must surely include the community.

Muslims are currently being targeted in the name of religion. They can’t be faulted for responding to the collective assault on their identity, in the name of that identity. Of course, that response includes  welcoming others in solidarity, in a language full of poetry, music, passion and faith.

At the anti-Citizenship (Amendment) Act (CAA) protests held peacefully outside the metro station gate at Rajiv Chowk on January 5, people wrote on the floor with chalk, the words in their heart. The phrase “Hum Dekhenge” (We Shall See) itself signified a defiant and hopeful spirit of protest. The recent banal argument against Faiz Ahmad Faiz’s fiery ghazal was an opposing wind that intensified the fire. There was a Faiz couplet also written in coloured chalk:

(We bless them their boorish style,
But we shall keep up the appeal of our desires).

The rebellious power and beauty of Urdu has resurfaced in these protests, like never before. 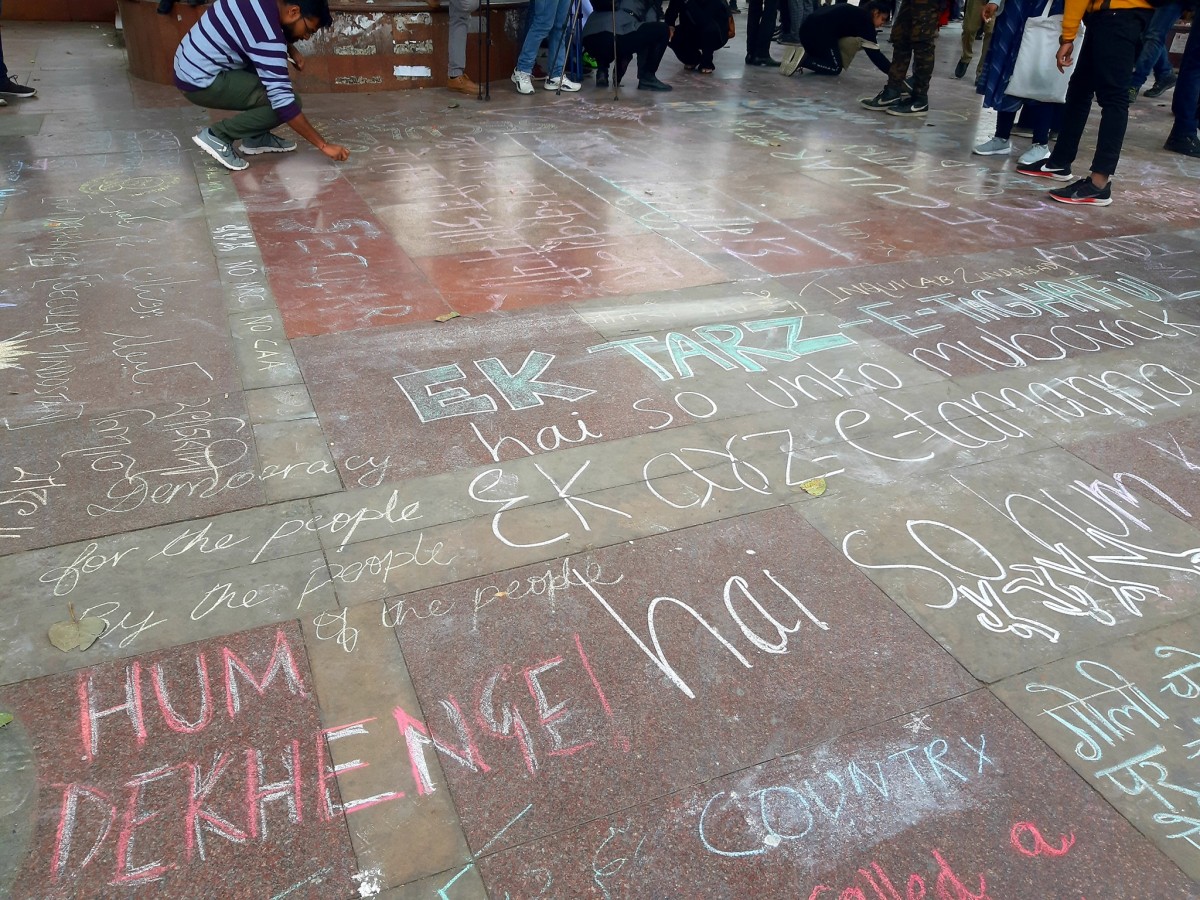 The faces of women in hijab have been a mark of courage and resistance. The iconic video of Ladeeda Farzana and Ayesha Renna desperately trying to save their male friend from police brutality in New Friends Colony is a striking image not only because Farzana and Renna are women, but women who belong to a minority community that is under threat from both the state and Hindutva organisations. Their hijabs mark them out. The risks involved in their images circulating in the public domain are disproportionately higher in comparison to other women. The Muslim women belonging to the working-class neighbourhood of Shaheen Bagh have forged a unique, collective identity of protest. They represent a force that has put their household economy under stress, to assert their rights. They know the CAA is part of a larger move to segregate Muslim citizens constitutionally, and that the NRC will affect poor Muslims more than anyone else. The women have gathered together to make space for protest, where all forms of solidarity are welcome. There is a unique sense of unity and mobility between private and public, home and world.

In all sites of protest, including the Jama Masjid, Muslims along with Hindus have read out the preamble to the Indian constitution. The assertion of identity has remained alongside – not in contradiction to – the commitment towards the constitution. However, there is a specific identity behind that commitment and it holds the promise of coexistence between faith and state.

The crackdown of the police on Muslim protestors in Uttar Pradesh, as well as on the students of Jamia Milia, during the anti-CAA protests, undermines the faith of Muslims in the Indian state. The othering is no longer limited to rhetoric but brutal action.  The Hindu’s Lucknow reporter Omar Rashid, who was detained in Lucknow, narrated how a policeman threatened to harm his beard. Social activist and Congress worker Sadaf Jafar alleged that she was beaten up in jail, and called a Pakistani. The humiliation meted out to Rashid and Jafar, other them as Muslims. They are identified as identities that deserve humiliation.  There is an ethical obligation to counter the logic of this humiliation by speaking in the name of your identity. ‘I am now beginning to realise what being Muslim in Amit Shah’s India means’,  Sadaf Jafar has said.

The liberal discomfort regarding Muslims chanting slogans like “Allah Hu Akbar” (God is great) and “La ilaha illallah” (there is no god but Allah) is exemplified by Shashi Tharoor tweeting that such slogans showcase a problem of “identity politics” and “Muslim communalism”. But the discomfort is not confined to ‘Hindu liberals’ alone. Writing in the Indian Express, Hayaat Fatemah, a student of Aligarh Muslim University, said she differs from Irena Akbar, arguing that this is “not the right time” for a “Muslim empowerment movement” against Islamophobia, and that religious sloganeering may lead to further othering.

Tharoor suffers from the liberal prejudice that the minority indulges in identity politics. The minority, however, is often compelled to respond to the identity politics of the majority. The forces of Hindutva are enforcing a code where they seek to erase the presence of Muslims. Muslims know that and want to reassert their presence as a community. If the Muslim sense of victimisation needs to be couched in liberal-humanist language, it discounts the voice of diversity.

Tharoor tweeted, the “issue is about constitutional values, the foundational pluralist idea of India”. Liberal secularists evoke pluralism and diversity as content-empty terms, and use them to critique any political assertion in the name of religion. Muslims are not evoking god’s name against the principles of the constitution. It is an articulation of presence, an assertion against political erasure. There is an old fear of god’s name being taken for divisive motives. It comes from a memory of strife. That fear is best neutralised politically when minorities democratically counter the fears of majoritarianism. We are witnessing a nonviolent neighbourhood of gods in the public sphere.

“We will not allow pluralism & diversity to be supplanted by any kind of religious fundamentalism,” says Tharoor.  But to label as “fundamentalism” any assertion of sentiments and rights by a vulnerable minority is secular blindness. A matter of belief is not a political concern.

Also Read: For the First Time Since Independence, Muslims Have Emerged on to the Streets

Tharoor should be grateful to Muslims for upholding India’s diversity by asserting their presence in public. A diversely political idea of India is emerging. Probably for the first time since Independence, Hindus and Muslims are learning about each other through immense proximity. This experience promises to enhance social intimacy. Solidarity is cutting through the manufactured politics of enmity. People of different faiths are praying and singing devotional songs in Shaheen Bagh. It is the most creative display of protest by a minority anywhere in the world.

Liberals like Tharoor need to put their political stakes in real diversity. It wasn’t communalism that caused the decisive political rift between Hindus and Muslims during partition. It was, as Gandhi rightly understood, the failure of trust between the two communities. Trust is a matter of faith.